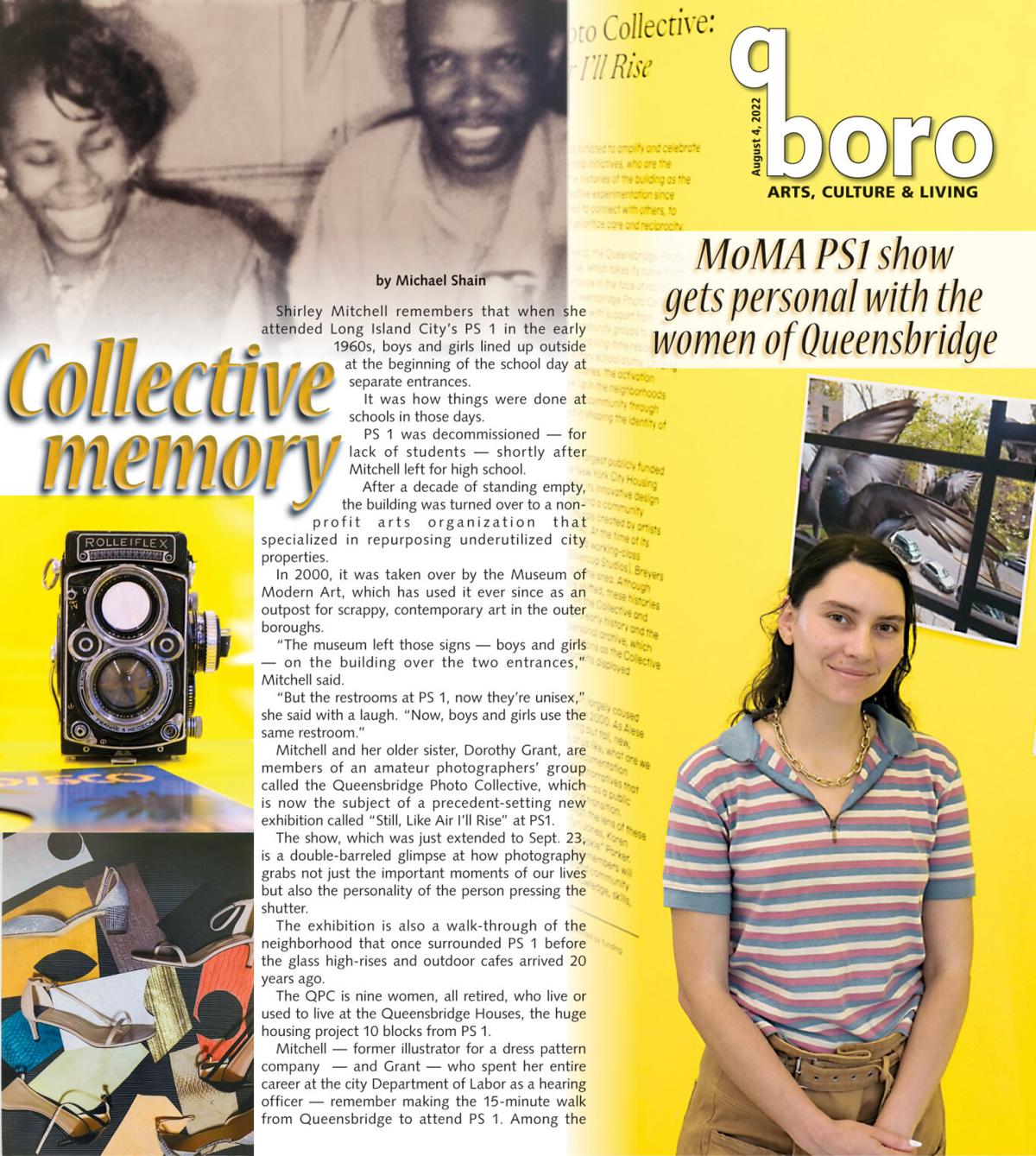 MoMA PS1 Assistant Curator Elena Ketelsen Gonzalez with exhibit items including a photo of John Henry and Rosalee Jacobs, Henry’s Rolleiflex camera and a collage of shoes and fabric by Nafisa Madhi. 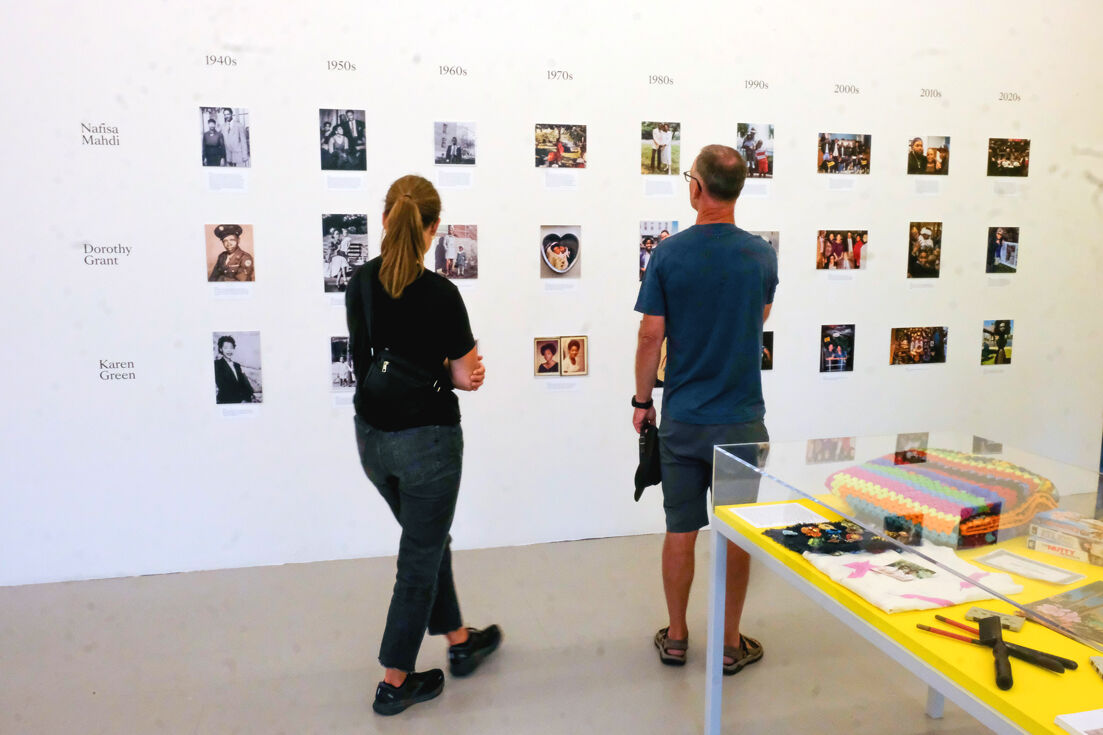 The exhibit “Still, Like Air I’ll Rise,” featuring works by the Queensbridge Photo Collective, is on display at MoMA PS1.

MoMA PS1 Assistant Curator Elena Ketelsen Gonzalez with exhibit items including a photo of John Henry and Rosalee Jacobs, Henry’s Rolleiflex camera and a collage of shoes and fabric by Nafisa Madhi.

The exhibit “Still, Like Air I’ll Rise,” featuring works by the Queensbridge Photo Collective, is on display at MoMA PS1.

Shirley Mitchell remembers that when she attended Long Island City’s PS 1 in the early 1960s, boys and girls lined up outside at the beginning of the school day at separate entrances.

It was how things were done at schools in those days.

PS 1 was decommissioned — for lack of students — shortly after Mitchell left for high school.

After a decade of standing empty, the building was turned over to a nonprofit arts organization that specialized in repurposing underutilized city properties.

In 2000, it was taken over by the Museum of Modern Art, which has used it ever since as an outpost for scrappy, contemporary art in the outer boroughs.

“The museum left those signs — boys and girls — on the building over the two entrances,” Mitchell said.

“But the restrooms at PS 1, now they’re unisex,” she said with a laugh. “Now, boys and girls use the same restroom.”

Mitchell and her older sister, Dorothy Grant, are members of an amateur photographers’ group called the Queensbridge Photo Collective, which is now the subject of a precedent-setting new exhibition called “Still, Like Air I’ll Rise” at PS 1.

The show, which was just extended to Sept. 23, is a double-barreled glimpse at how photography grabs not just the important moments of our lives but also the personality of the person pressing the shutter.

The exhibition is also a walk-through of the neighborhood that once surrounded PS 1 before the glass high-rises and outdoor cafes arrived 20 years ago.

The QPC is nine women, all retired, who live or used to live at the Queensbridge Houses, the huge housing project 10 blocks from PS 1.

Mitchell — former illustrator for a dress pattern company — and Grant — who spent her entire career at the city Department of Labor as a hearing officer — remember making the 15-minute walk from Queensbridge to attend PS 1. Among the items on display there now are a photo of their parents, John Henry and Rosalee Jacobs, and Henry’s Rolleiflex camera, a top-quality piece of equipment.

The collective is an outgrowth of the Queensbridge-Riis Senior Center, where members of the society have been working since 2019 with a group of photography teachers called the 5 Corners Collective.

“They even brought cameras and taught us how to use them,” said Grant. “They did everything,”

Instructors would take home the memory cards from the cameras and bring back prints the next week of what they’d photographed.

“Then, we’d all discuss the photos and talk about how they could be better,” said Grant. “That’s how we learned.”

From the beginning, the show was intended to be an exhibition of personal history as well as art, said Elena Ketelsen Gonzalez, PS1's assistant curator.

There is little or no sign in the show of what made has Queensbridge notorious, a troubling crime rate and a music scene that gave rise to a slew of rap stars including Nas, Capone and Mobb Depp.

“This is about a specific generation,” said Gonzalez.

“Still, Like Air I’ll Rise” (the title is borrowed from a famous Maya Angelou poem) “was a way to reconnect the neighborhood to PS 1,” said Mitchell. “When the school became a museum, it lost its connection with the neighborhood. But we were still here.”

The nine members show photos from every decade of their lives leading up to their recent work in the collective. The show works at being local and personal history at the same time.

Piled on a table is a free magazine featuring the collective’s photos that were squeezed out of the show for a lack of space.

“You are never too old to set another goal or to dream a new dream,” a quote from C.S. Lewis, author of the “Narnia” books, is on the magazine’s opening page.

“Now these photos will be saved just as any photos that have been shown at PS1,” said the curator. “They can’t be destroyed now. A museum has that responsibility.”

This article originally misstated the title and last name of MoMA PS1's assistant curator. Her name is Elena Ketelsen Gonzalez. We regret the errors.