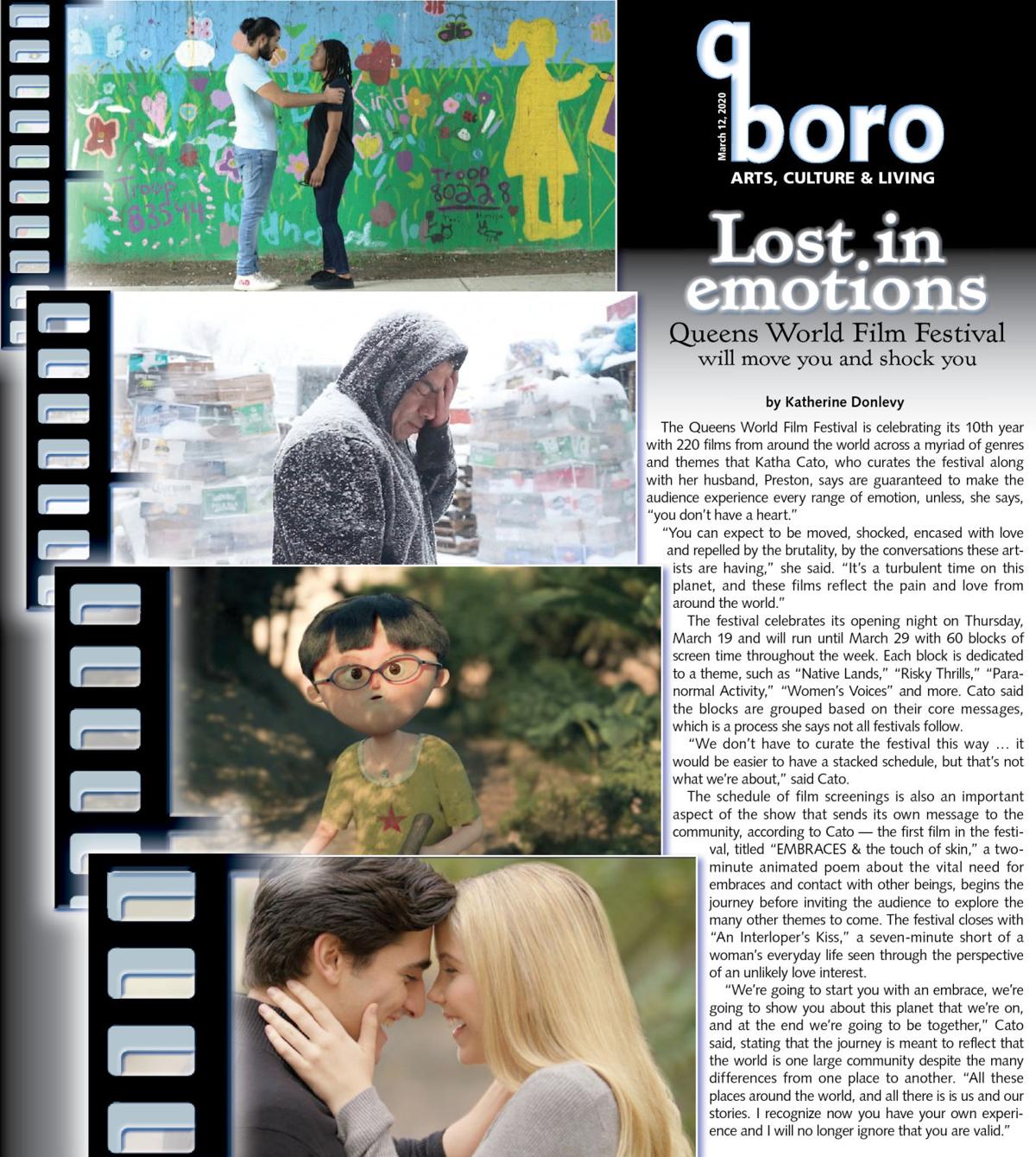 The Queens World Film Festival is celebrating its 10th year with 220 films from around the world across a myriad of genres and themes that Katha Cato, who curates the festival along with her husband, Preston, says are guaranteed to make the audience experience every range of emotion, unless, she says, “you don’t have a heart.”

“You can expect to be moved, shocked, encased with love and repelled by the brutality, by the conversations these artists are having,” she said. “It’s a turbulent time on this planet, and these films reflect the pain and love from around the world.”

The festival celebrates its opening night on Thursday, March 19 and will run until March 29 with 60 blocks of screen time throughout the week. Each block is dedicated to a theme, such as “Native Lands,” “Risky Thrills,” “Paranormal Activity,” “Women’s Voices” and more. Cato said the blocks are grouped based on their core messages, which is a process she says not all festivals follow.

“We don’t have to curate the festival this way … it would be easier to have a stacked schedule, but that’s not what we’re about,” said Cato.

The schedule of film screenings is also an important aspect of the show that sends its own message to the community, according to Cato — the first film in the festival, titled “EMBRACES & the touch of skin,” a two-minute animated poem about the vital need for embraces and contact with other beings, begins the journey before inviting the audience to explore the many other themes to come. The festival closes with “An Interloper’s Kiss,” a seven-minute short of a woman’s everyday life seen through the perspective of an unlikely love interest.

“We’re going to start you with an embrace, we’re going to show you about this planet that we’re on, and at the end we’re going to be together,” Cato said, stating that the journey is meant to reflect that the world is one large community despite the many differences from one place to another. “All these places around the world, and all there is is us and our stories. I recognize now you have your own experience and I will no longer ignore that you are valid.”

“Ode to Passion” is among the hundreds of films Cato is excited to present, particularly because director Jack Danini chose the festival for its world premiere.

“It’s all in verse, and they do sing at times, but it’s very Shakespearean. The language just elevates,” said Cato.

Cato also expressed excitement for the U.S. premiere of “The Factory,” a 90-minute feature film that explores the stories of those who died from cancer caused by chemical fumes in an Italian factory of synthetic dyes. She worries, however, that director Max Chicco will be unable to make the premiere in light of travel restrictions from the coronavirus.

Children filmmakers will also make their debut on the festival’s final day during their own block: “Kid’s Corner.” Unlike the rest of the filmmakers, the young artists will celebrate their works with a red carpet rollout.

The other 59 blocks don’t have a red carpet because Cato prefers to keep a “casual” and “warm” atmosphere.

“I call it festival-casual,” Cato explained. “This is about community, and we feel that our community is the world, and that’s Queens.”

Each film screening is followed by a Q&A in which the audience is encouraged to ask the filmmakers about their works.

“You can ask them anything. It’s so they can talk about their work and so you recognize them … the filmmakers want you to ask about their films.”

Aside from enjoying incredible films, Cato’s favorite part of the festival is watching the filmmakers interact with the audience and witness the impact their art has.

“I think when you really see a filmmaker emerge from themselves and stand in front of people that they don’t know — it’s not their families, it’s not their dentist — and talk about their work, it’s incredible,” said Cato. “I can leave that theater content, a conversation is happening, that’s what they’ll remember … People come to Queens for art, because it’s an intelligent place, with people from all over the planet.”

Cato warns festival-goers of the emotional journey they’ll embark on once they enter the theater, promising, “And if you do have a heart, I’ll ... hold your hand and tell you it’s going to be OK. This is a unique experience and it’s in their backyard and you don’t want to miss this. It’s amazing.”