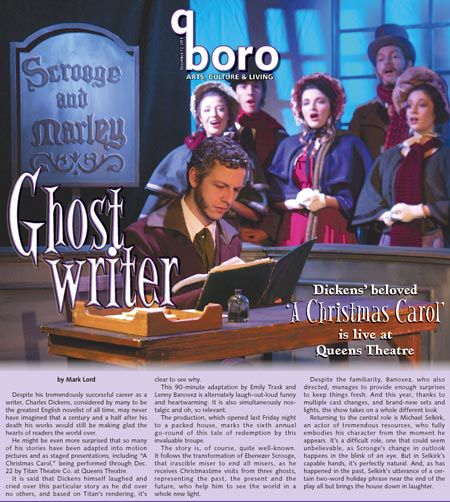 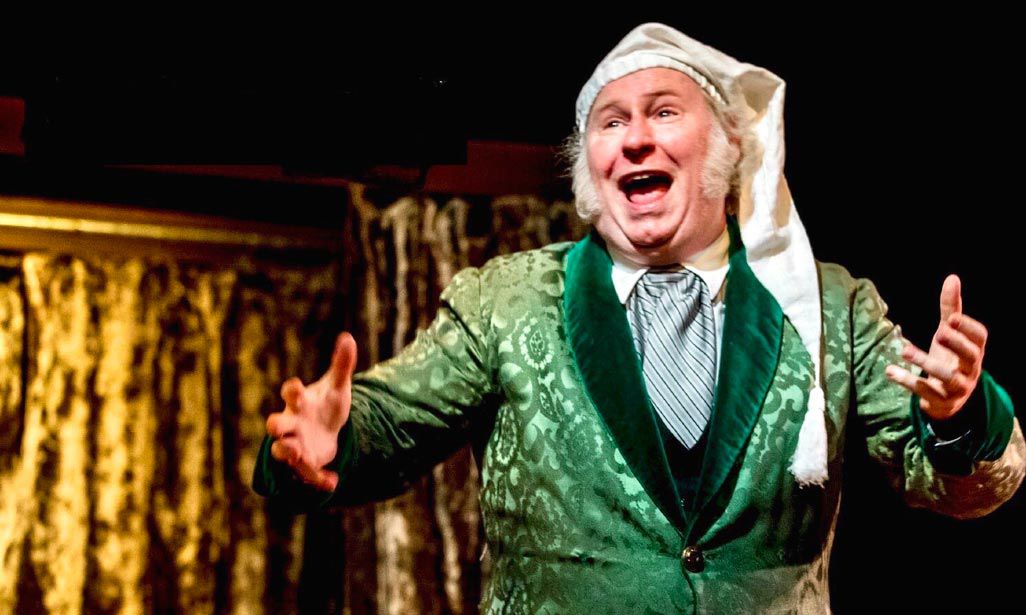 Ebenezer Scrooge (Michael Selkirk) has his epiphany. On the cover: Bob Cratchit (Andrew Garrett) at work. 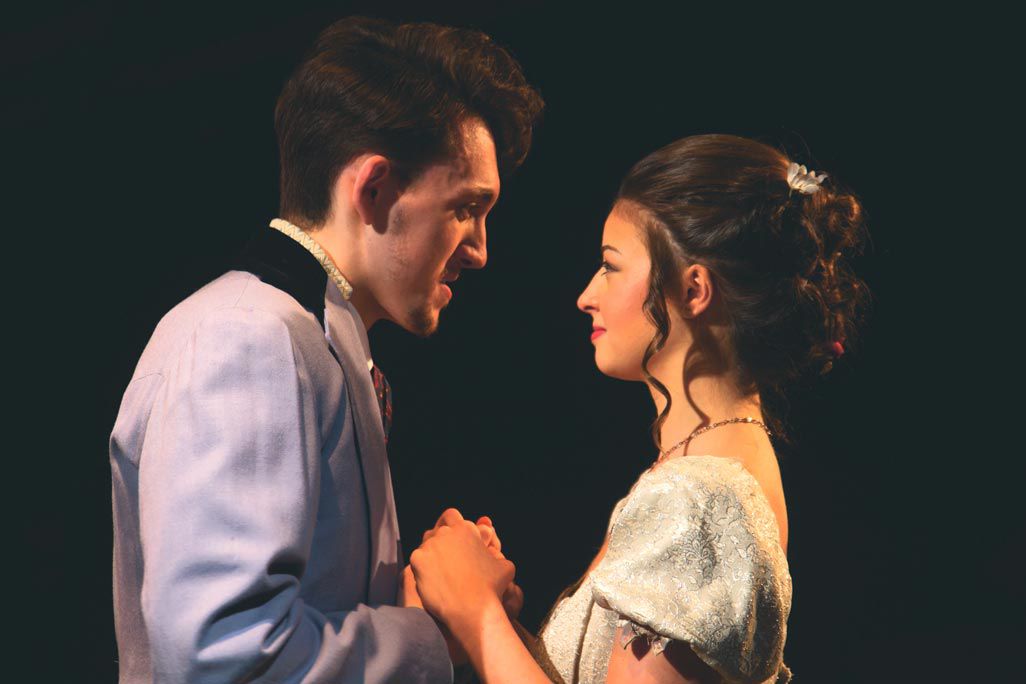 Ebenezer Scrooge (Michael Selkirk) has his epiphany. On the cover: Bob Cratchit (Andrew Garrett) at work.

Despite his tremendously successful career as a writer, Charles Dickens, considered by many to be the greatest English novelist of all time, may never have imagined that a century and a half after his death his works would still be making glad the hearts of readers the world over.

He might be even more surprised that so many of his stories have been adapted into motion pictures and as staged presentations, including “A Christmas Carol,” being performed through Dec. 22 by Titan Theatre Co. at Queens Theatre.

It is said that Dickens himself laughed and cried over this particular story as he did over no others, and based on Titan’s rendering, it’s clear to see why.

This 90-minute adaptation by Emily Trask and Lenny Banovez is alternately laugh-out-loud funny and heartwarming. It is also simultaneously nostalgic and oh, so relevant.

The production, which opened last Friday night to a packed house, marks the sixth annual go-round of this tale of redemption by this invaluable troupe.

The story is, of course, quite well-known. It follows the transformation of Ebenezer Scrooge, that irascible miser to end all misers, as he receives Christmastime visits from three ghosts, representing the past, the present and the future, who help him to see the world in a whole new light.

Despite the familiarity, Banovez, who also directed, manages to provide enough surprises to keep things fresh. And this year, thanks to multiple cast changes, and brand-new sets and lights, the show takes on a whole different look.

Returning to the central role is Michael Selkirk, an actor of tremendous resources, who fully embodies his character from the moment he appears. It’s a difficult role, one that could seem unbelievable, as Scrooge’s change in outlook happens in the blink of an eye. But in Selkirk’s capable hands, it’s perfectly natural. And, as has happened in the past, Selkirk’s utterance of a certain two-word holiday phrase near the end of the play all but brings the house down in laughter.

He is surrounded by a large group of game players, many of whom appear in multiple roles. As Jacob Marley, the long-departed former business partner of Scrooge, Kevin Stanfa is otherworldly, and appropriately weary, being doomed to eternally wander the Earth weighed down by heavy chains. He later appears to create a younger version of the character.

Brad Makarowski makes for a delightful Mr. Fezziwig, for whom Scrooge apprenticed in his younger days. Even more spirited is Mrs. Fezziwig, brought to scene-stealing life by Gracie Lee Brown, who also does well as the Ghost of Christmas Present.

Two lovely scenes are shared by young Scrooge (Austin Doughty) and the love of his life, Belle (Julia Klinestiver). Quick mention must be made of the youngest member of the company, 7-year-old Rafael Milan Vasicek, who need only utter a few words as Tiny Tim to touch the audience’s collective hearts.

The new sets (designed by Stephen Hudson-Mairet) are choreographed to slide on, off and around with ease, while the ornate period costumes (Lorraine Smyth) are an eyeful. The lighting (Katy Atwell) and sound design (Weston Wetzel) add to the atmosphere. Laura Frye’s simple dance routines are executed efficiently by the company, as are the brief musical interludes, under the direction of Jessica McIlquham.