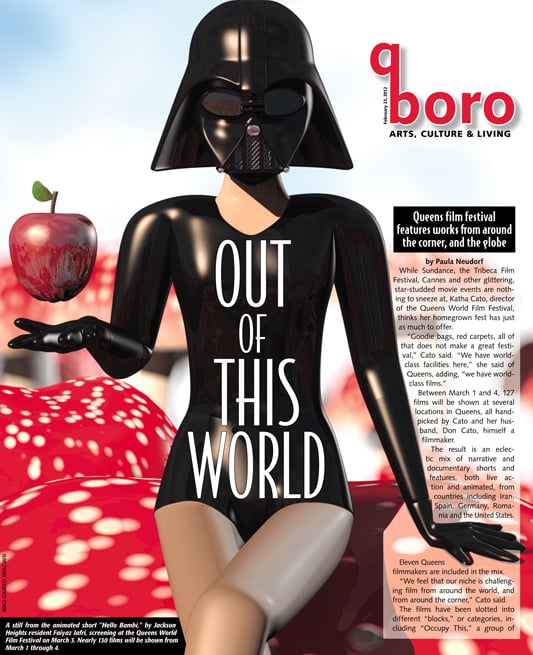 A still from the animated short “Hello Bambi,” by Jackson Heights resident Faiyaz Jafri, screening at the Queens World Film Festival on March 3. Nearly 130 films will be shown from March 1 through 4. 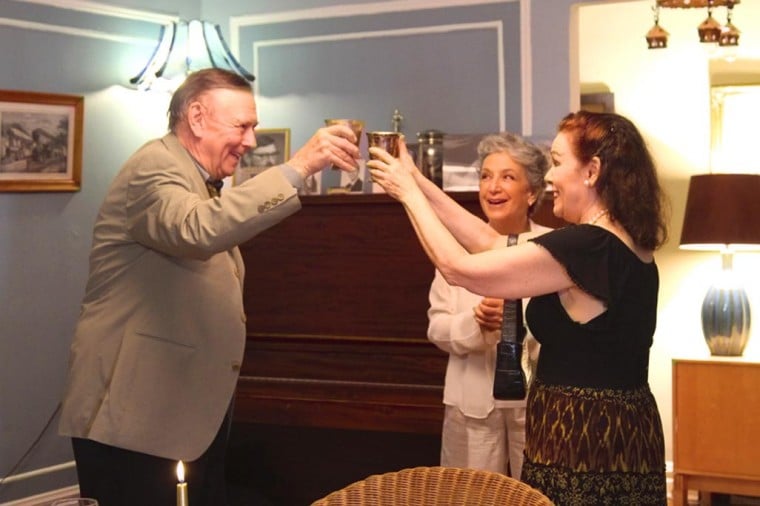 A still from the animated short “Hello Bambi,” by Jackson Heights resident Faiyaz Jafri, screening at the Queens World Film Festival on March 3. Nearly 130 films will be shown from March 1 through 4.

While Sundance, the Tribeca Film Festival, Cannes and other glittering, star-studded movie events are nothing to sneeze at, Katha Cato, director of the Queens World Film Festival, thinks her homegrown fest has just as much to offer.

Between March 1 and 4, 127 films will be shown at several locations in Queens, all handpicked by Cato and her husband, Don Cato, himself a filmmaker.

The result is an eclectic mix of narrative and documentary shorts and features, both live action and animated, from countries including Iran, Spain, Germany, Romania and the United States. Eleven Queens filmmakers are included in the mix.

The films have been slotted into different “blocks,” or categories, including “Occupy This,” a group of films on the Occupy movement; “Old Spice,” featuring works on the elderly; and “LGBT,” sponsored by Queens Pride House. Tickets cost $12 per block, and can be bought by visiting queensworldfilmfestival.com and clicking on “QWFF store.” A full schedule is viewable by clicking on “The Festival” and then “Schedule.” All showings include Q & A sessions with filmmakers involved.

For Jackson Heights animator Faiyaz Jafri, whose six-minute film “Hello Bambi” is showing as part of the fest’s “Alternate Styles” block, one of the best parts of the event is being able to walk to his own screening. Originally from Holland, Jafri moved to New York in 1998 and settled in Jackson Heights several years ago.

“Hello Bambi” is Jafri’s 10th animated film. A rewriting of a well-known fairy tale ending, it depicts Snow White’s hallucinatory dream after eating the poisoned apple, as she travels to an emergency room in a glass coffin hitched to a silver train.

The pyschedelic ride features an evil queen in a Darth Vader mask, a trip in a DeLorean and more. It has already screened at several festivals, and won the “Best Animation” prize at last year’s Big Apple Film Festival.

Jafri, whose daughter Vega is 6 years old, said the idea of toying with the fairy tale came about in part because he didn’t want Vega “to become that girl who is waiting for her prince.”

“The world is not that beautiful, I guess, or that innocent,” he said.

Another Jackson Heights film, “Can’t Dance,” directed by Richard Uhlig, also has a fantastical element, though the live action short is rooted in reality.

The film, which is having its world premiere on the fest’s opening night, tells the story of a grieving widower whose wife’s ghost tries to help him move on by setting him up with a neighbor.

“I wanted to shoot something entirely in my own apartment building,” Uhlig said. “Can’t Dance” is Uhlig’s first foray into directing, though he has written two Hollywood screenplays as well as two novels. Originally from Kansas, Uhlig and his wife lived in Manhattan before moving to Queens with their young children.

“I fell in love with the place,” he said. “It’s easier to talk to people, I felt more creative than I ever did in Manhattan.” He became interested, he added, in how his building is a “microcosm of society.”

The film, he said, “was kind of based on elderly couples who I saw in our building.” It stars Terrence Markovich, Karen Lynn Gorney (of “Saturday Night Fever” fame) and Catherine Wolf. Uhlig said “Can’t Dance” just recently found a distributor.

A sign of the festival’s both global and local focus, the opening night at the Museum of the Moving Image on March 1 will feature not only Uhlig’s Jackson Heights film, but also a 20-minute film from Iran that is banned in that country called “War Story." Its screening will include a statement from the director, who lives in Iran. Referring to his work and two other banned movies appearing in the fest, Cato said: “These filmmakers have risked everything to get their films to us.”

Opening night will also honor Councilman Danny Dromm (D-Jackson Heights) for his “unflinching devotion to all New York citizens,” according to Cato, and Lloyd Kaufman, the president of Troma, a horror film production company based in Queens and well-known to that genre’s fans around the globe.

“Mr. Bricks,” a feature-length described as a “heavy metal rock murder musical” and produced by Troma, will have its New York premiere at the fest on March 2. And a set of films in a block titled “Tortured and Twisted,” screening the same day, will also feature horror films.

Flushing resident Andrea Verdura appears in one of the “Tortured and Twisted” picks, a narrative short called “The Walk Home.”

She described it as a campy, “thriller-ish” work about “being careful what you wish for.” Verdura, who appeared in a small part in the recent remake of “Arthur,” plays a character in “The Walk Home” named Law. Edie Monroy and Dawn Del Orbe directed the film, which was shot just around the corner from Monroy’s Elmhurst home.

Verdura said she is excited to be part of the festival, and noted she loves short films. “I think they’re great vehicles to start, to get different ideas out there.”

Films in the Queens World Film Festival have the chance to win a variety of prizes, with a “transparent jury system,” according to Cato. Jury members include people who work in the industry at organizations like IdeaRocket, a motion graphics and animation company based in Queens, as well as Cavu Pictures, Kino Lorber Films and the Queens Council on the Arts.

Cato and her husband are locals themselves, having lived in Jackson Heights for 22 years. Though the festival may lack the bells, whistles and frills of some, Cato said money had been spent where it was most necessary.

“Sixty percent of our budget goes to the projectionists and all of the equipment,” she noted.

What a filmmaker truly wants, she added, “are people there to see his film.”