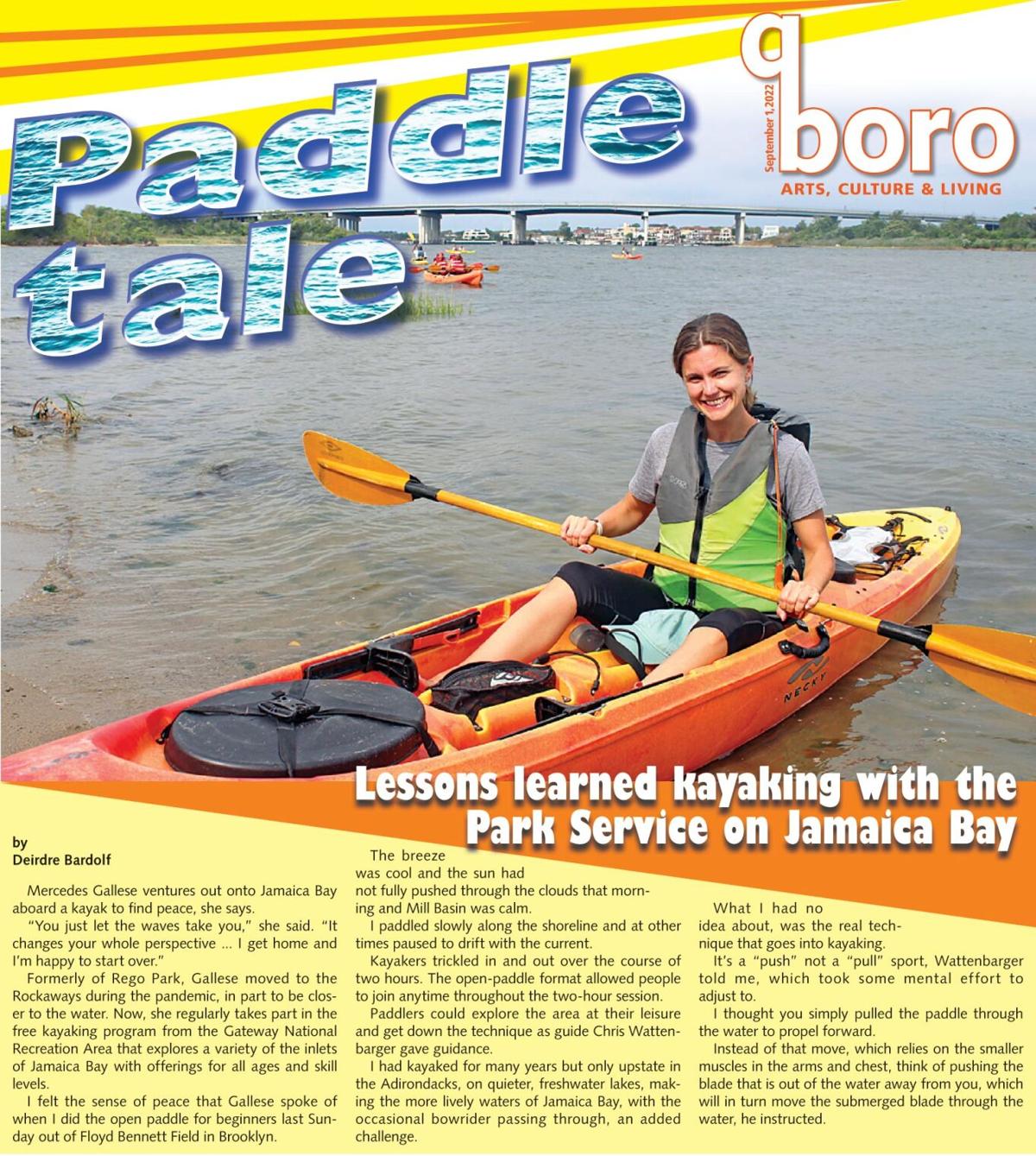 Reporter Deirdre Bardolf gives kayaking on the bay a shot for the first time. 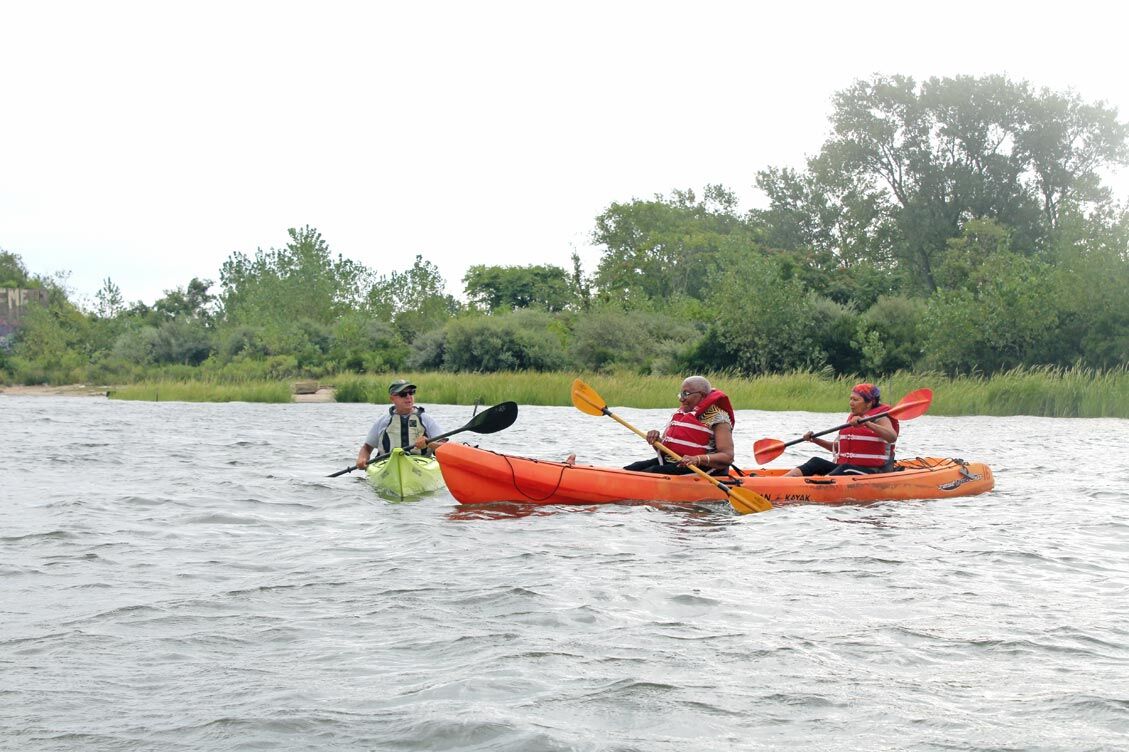 Reporter Deirdre Bardolf gives kayaking on the bay a shot for the first time.

Mercedes Gallese ventures out onto Jamaica Bay aboard a kayak to find peace, she says.

“You just let the waves take you,” she said. “It changes your whole perspective ... I get home and I’m happy to start over.”

Formerly of Rego Park, Gallese moved to the Rockaways during the pandemic, in part to be closer to the water. Now, she regularly takes part in the free kayaking program from the Gateway National Recreation Area that explores a variety of the inlets of Jamaica Bay with offerings for all ages and skill levels.

I felt the sense of peace that Gallese spoke of when I did the open paddle for beginners last Sunday out of Floyd Bennett Field in Brooklyn.

The breeze was cool and the sun had not fully pushed through the clouds that morning and Mill Basin was calm.

I paddled slowly along the shoreline and at other times paused to drift with the current.

Kayakers trickled in and out over the course of two hours. The open-paddle format allowed people to join anytime throughout the two-hour session.

Paddlers could explore the area at their leisure and get down the technique as guide Chris Wattenbarger gave guidance.

I had kayaked for many years but only upstate in the Adirondacks, on quieter, freshwater lakes, making the more lively waters of Jamaica Bay, with the occasional bowrider passing through, an added challenge.

What I had no idea about, was the real technique that goes into kayaking.

It’s a “push” not a “pull” sport, Wattenbarger told me, which took some mental effort to adjust to.

I thought you simply pulled the paddle through the water to propel forward.

Instead of that move, which relies on the smaller muscles in the arms and chest, think of pushing the blade that is out of the water away from you, which will in turn move the submerged blade through the water, he instructed.

That, as well as putting your whole shoulder and core into the move, gives you four times as much power, he said.

And you should feel it all the way down to your feet, Wattebarger added, which I felt an immediate difference from.

From doing yoga or lifting weights, I know the power of rooting through your feet, so the only difference here was pushing them into the foot rests fixed to the inside of my kayak, which gave me more strength and stability to push the paddle forward and get me moving.

Some of the paddle trips welcome walk-ups, like the beginners one I did, but others are miles-long excursions that tour areas like the Plumb Beach, Rockaway Cove and the World War II fire control tower near Breezy Point.

Often, they “go with the tide,” said John Daskalakis, who leads the Gateway kayaking program. The upcoming fire control tower excursion is designed to bring riders back with the tide.

My paddle last Sunday was actually moved from the more open waters of Jamaica Bay off the eastern coast of Floyd Bennett Field to the calmer waters on Mill Basin because the wind was too strong.

“There is a chance to do just about every level of kayaking, from some pretty long trips to beginner paddles and how-tos,” Daskalakis said.

“I think it’s just the best way to see Jamaica Bay. Being immersed in the resources, I mean, literally immerged, is really a fantastic way to appreciate what we’ve got here.”

He said it’s a “real New York City experience” because kayakers may see turtles and herons and egrets ... and then planes taking off from Kennedy Airport.

Wattenbarger, a 70-year-old Sunnyside resident who was a longtime participant being hired during the pandemic to help run the program, calls it his “cool summer job.” He said one can kayak Jamaica Bay for years and still not see all it has to offer.

“We’ve had people this year who we met probably five or six weeks ago who had never paddled a kayak and [last] Friday, they paddled six and a half miles,” he said.

The participants ranged in age from 6 to 83 years old, he said.

The season wraps up on Sept. 11 but there are still plenty of trips to take. Walk-up kayaking is held at Floyd Bennett Field Saturday and Sunday from 9:30 to 11:30 a.m. There are also walk-up programs on alternating Saturdays at Canarsie Pier and Riis Landing from 1 to 3:30 pm.

Visit nps.gov/gate/planyourvisit for the calendar of upcoming events or call (718) 758-3671 for more information.