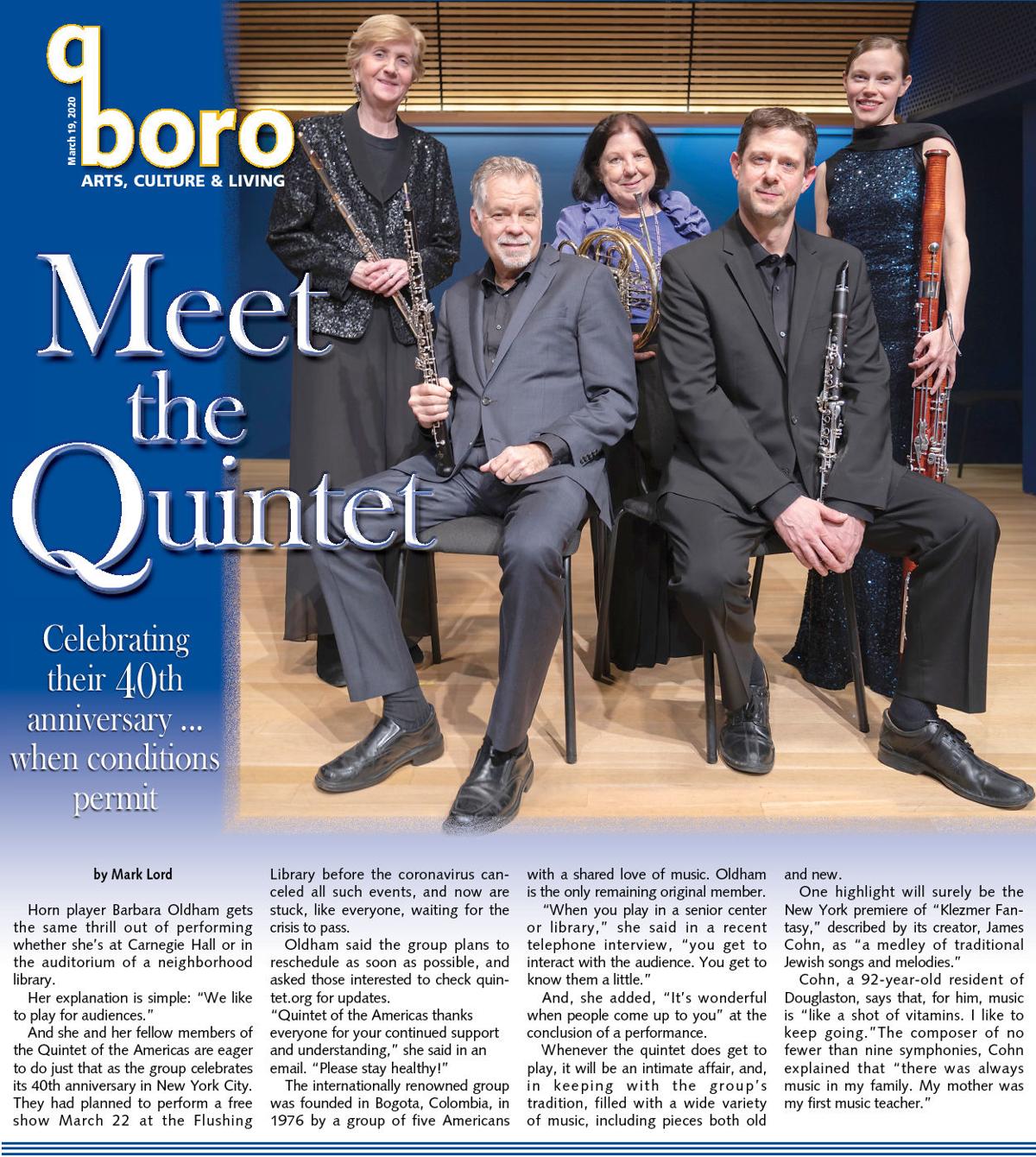 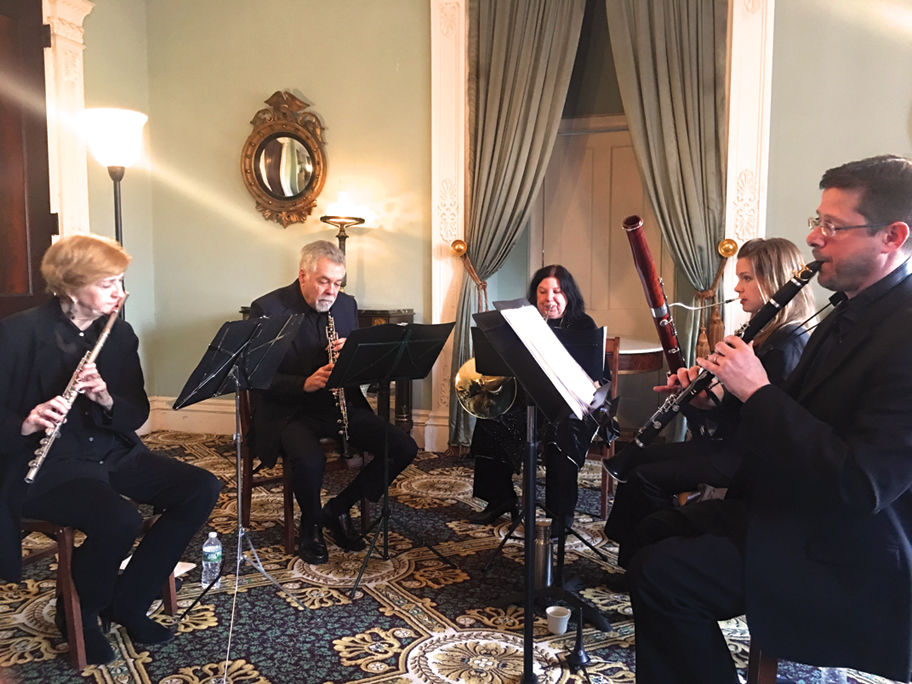 The Quintet of the Americas — Karla Moe, left, Matt Sullivan, Barbara Oldham, Sasha Gee Enegren and Ben Baron — are celebrating the group’s 40th anniversary this year. On the cover: The players at rest.

The Quintet of the Americas — Karla Moe, left, Matt Sullivan, Barbara Oldham, Sasha Gee Enegren and Ben Baron — are celebrating the group’s 40th anniversary this year. On the cover: The players at rest.

Horn player Barbara Oldham gets the same thrill out of performing whether she’s at Carnegie Hall or in the auditorium of a neighborhood library.

Her explanation is simple: “We like to play for audiences.”

And she and her fellow members of the Quintet of the Americas are eager to do just that as the group celebrates its 40th anniversary in New York City. They had planned to perform a free show March 22 at the Flushing Library before the coronavirus canceled all such events, and now are stuck, like everyone, waiting for the crisis to pass.

Oldham said the group plans to reschedule as soon as possible, and asked those interested to check quintet.org for updates.

“Quintet of the Americas thanks everyone for your continued support and understanding,” she said in an email. “Please stay healthy!”

The internationally renowned group was founded in Bogota, Colombia, in 1976 by a group of five Americans with a shared love of music. Oldham is the only remaining original member.

“When you play in a senior center or library,” she said in a recent telephone interview, “you get to interact with the audience. You get to know them a little.”

And, she added, “It’s wonderful when people come up to you” at the conclusion of a performance.

Whenever the quintet does get to play, it will be an intimate affair, and, in keeping with the group’s tradition, filled with a wide variety of music, including pieces both old and new.

One highlight will surely be the New York premiere of “Klezmer Fantasy,” described by its creator, James Cohn, as “a medley of traditional Jewish songs and melodies.”

Cohn, a 92-year-old resident of Douglaston, says that, for him, music is “like a shot of vitamins. I like to keep going.”

The composer of no fewer than nine symphonies, Cohn explained that “there was always music in my family. My mother was my first music teacher.”

The Klezmer piece runs just over eight minutes, he said, including a wedding march which he was more than eager to hum during a recent telephone interview. It also includes a song of praise, the melody of which he similarly shared.

“I put together the entire thing,” he added.

In addition to Oldham, the concert will feature Karla Moe on flute, Matt Sullivan on oboe and English horn, Ben Baron on clarinet and Sasha Gee Enegren on bassoon.

Two of the scheduled works were inspired by recollections of seniors residing in the borough, part of the Quintet’s Memory Project: Lembit Beecher’s “Music for Bayside,” composed in 2013, and “Retrospectives,” written by Harold Gutierrez in 2015, which, according to Oldham, has a distinct Latin feeling.

Also on the program will be Robert Deemer’s “Manahatta Windows,” a work that was commissioned for the 400th anniversary of Henry Hudson sailing up the Hudson River and refers to the name of Manhattan before Europeans arrived.

“It begins with a Native American chant,” Oldham said. She described the music as “driven, lots of activity, evocative of Manhattan construction.” It moves into a “jazzy section,” and concludes by returning to the opening chant.

“Echoes from a Distant Land,” a “lively, rhythmic Cuban dance” piece created by Jose Raul Bernardo, is also on the bill. And, of course, music representative of Colombia will be prominently featured.

According to Oldham, the Quintet’s mission indicates that at least one piece by a Colombian composer is to be included in each concert.

“When we came back to the United States,” Oldham said, “We had a repertoire of Colombian dances.” Two of them will be performed at the upcoming concert, including “Mananita,” by Jorge Olaya Munoz.

In fact, she said, the “whole program is tuneful and pretty.”