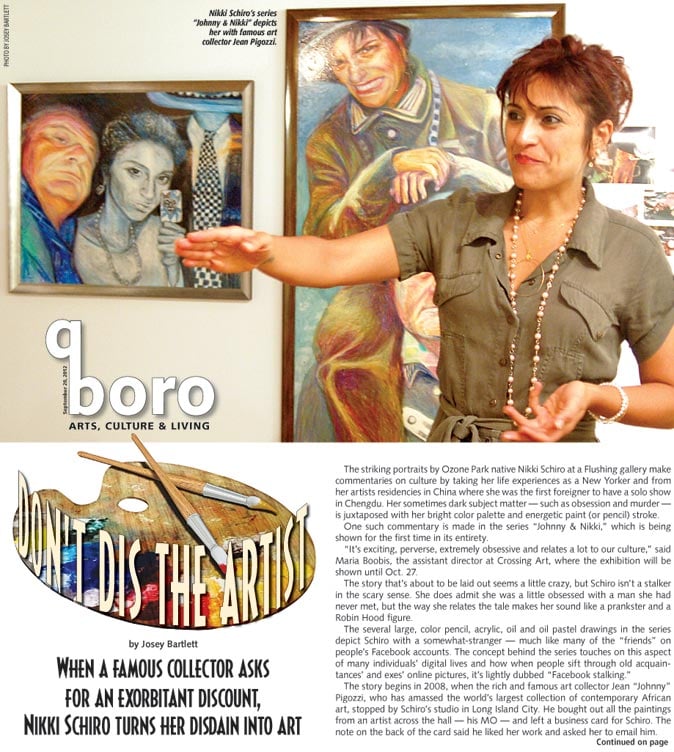 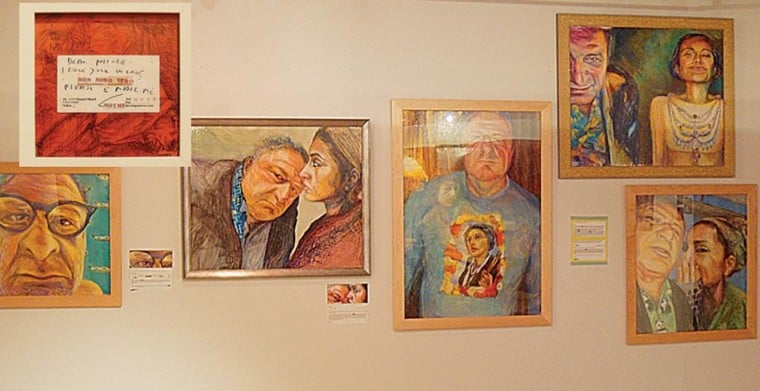 Nikki Schiro’s series “Johnny & Nikki” depicts her with famous art collector Jean Pigozzi, whom she hadn’t met when she started the works. A business card, inset, that spurred the series is displayed along with the colorful portraits.

Nikki Schiro’s series “Johnny & Nikki” depicts her with famous art collector Jean Pigozzi, whom she hadn’t met when she started the works. A business card, inset, that spurred the series is displayed along with the colorful portraits.

The striking portraits by Ozone Park native Nikki Schiro at a Flushing gallery make commentaries on culture by taking her life experiences as a New Yorker and from her artists residencies in China where she was the first foreigner to have a solo show in Chengdu. Her sometimes dark subject matter — such as obsession and murder — is juxtaposed with her bright color palette and energetic paint (or pencil) stroke.

One such commentary is made in the series “Johnny & Nikki,” which is being shown for the first time in its entirety.

“It’s exciting, perverse, extremely obsessive and relates a lot to our culture,” said Maria Boobis, the assistant director at Crossing Art, where the exhibition will be shown until Oct. 27.

The story that’s about to be laid out seems a little crazy, but Schiro isn’t a stalker in the scary sense. She does admit she was a little obsessed with a man she had never met, but the way she relates the tale makes her sound like a prankster and a Robin Hood figure.

The several large, color pencil, acrylic, oil and oil pastel drawings in the series depict Schiro with a somewhat-stranger — much like many of the “friends” on people’s Facebook accounts. The concept behind the series touches on this aspect of many individuals’ digital lives and how when people sift through old acquaintances’ and exes’ online pictures, it’s lightly dubbed “Facebook stalking.”

The story begins in 2008, when the rich and famous art collector Jean “Johnny” Pigozzi, who has amassed the world’s largest collection of contemporary African art, stopped by Schiro’s studio in Long Island City. He bought out all the paintings from an artist across the hall — his MO — and left a business card for Schiro. The note on the back of the card said he liked her work and asked her to email him.

She pinned the card on her bulletin board — “I was holding onto it like it was this precious thing,” she said — and then did what many Gen Y-ers do; she Googled him.

From this research she created a drawing of the two of them together and sent it to him as a gift, along with some photos of her other custom-framed works, per the advice given by a book on sales she was reading. She has since questioned that philosophy because he has never bought any of her works.

Pigozzi’s assistant Tasha responded that he wanted a 75 percent discount. The correspondence, which is shown along with the works at Crossing Art, was intermittent because he was on his boat, Tasha said.

“He wants a discount, but he’s on his yacht. I was so upset,” Schiro said in an interview.

Tasha stops replying to Schiro, but her series goes on with a little bit of anger to fuel her.

She painted a portrait of Pigozzi with Mr. Limo, the icon from his clothing brand LimoLand.

Schiro also created a drawing of herself holding a joker card with Pigozzi by her side. Another work has him wearing a T-shirt with her picture on it.

She found an online picture with Pigozzi next to an expensive necklace and drew a work with him next to her, while she’s wearing the piece of jewelry.

She said this pokes fun at him wanting a discount but still buying other luxurious items.

She sends photos of all these drawings to him and he wants to buy one, but again at a large discount. She tells Tasha that it’s too much and she stops receiving emails, until Schiro, after an awkward meeting with the assistant at an art show/mingle event, said she was going to post the art on a French blog Pigozzi writes and posts photographs of himself on.

The response from this was “Mr. Pigozzi is not used to being someone’s muse and is feeling a little uncomfortable with the whole thing.”

“So then I had to kill him,” Schiro said with a joking laugh, hinting that the project/joke was nearing its end ... maybe.

The last painting in the series — for now — is of Schiro beheading Pigozzi, which mimics the painting by Caravaggio “Judith Beheading Holofernes.”

The gallery is putting together a panel discussion pertaining to the exhibition. Pigozzi has been asked to talk, but there has been no reply as of yet.

‘Let Them Find an Effigy, They’ll Never Find Me’