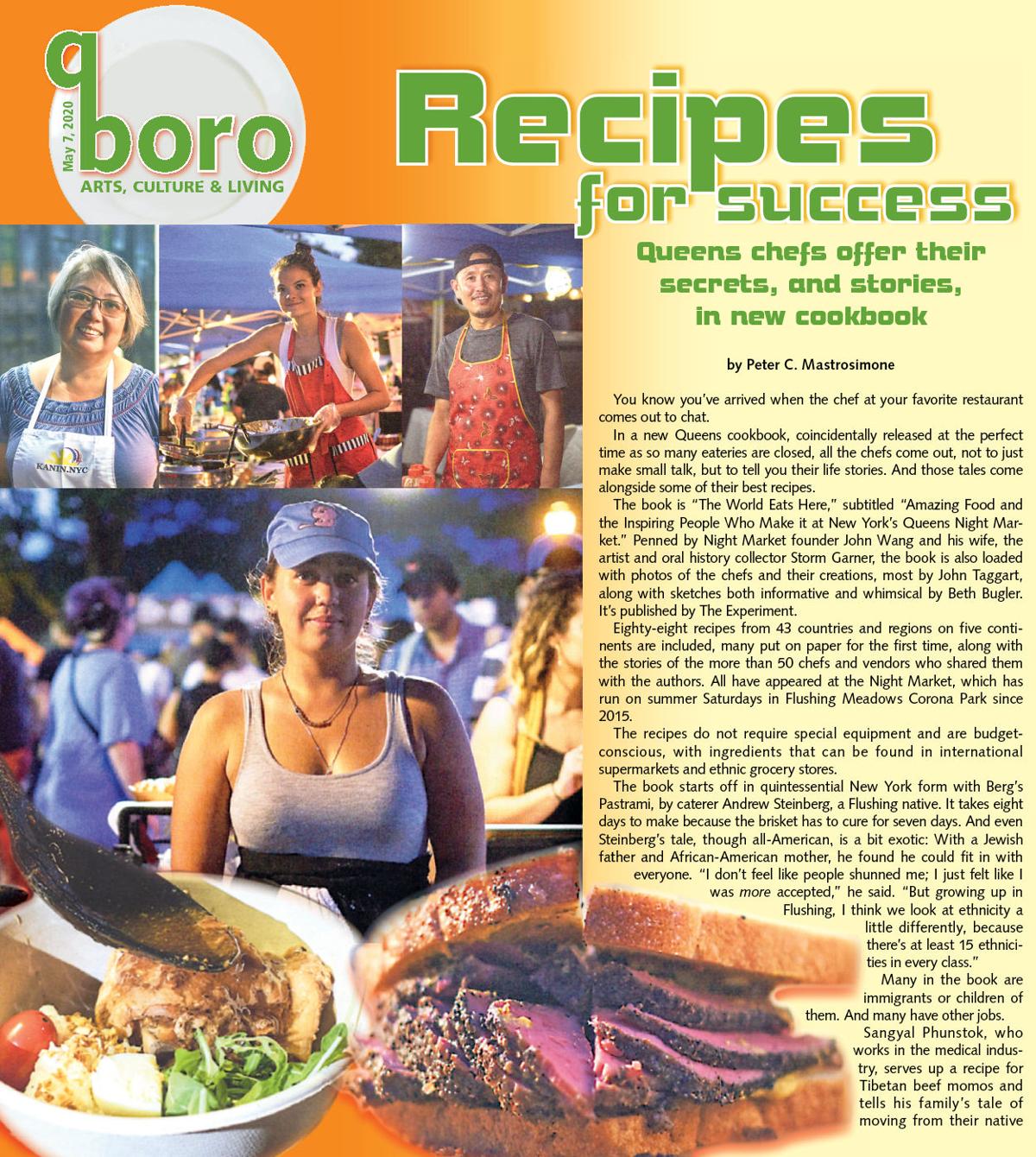 On the cover: Just a sampling of the chefs and foods in the book.

“The World Eats Here,” by John Wang and Storm Garner, features scores of recipes and stories of the people behind them, as well as great photos and sometimes informative, sometimes whimsical drawings, left.

On the cover: Just a sampling of the chefs and foods in the book.

“The World Eats Here,” by John Wang and Storm Garner, features scores of recipes and stories of the people behind them, as well as great photos and sometimes informative, sometimes whimsical drawings, left.

You know you’ve arrived when the chef at your favorite restaurant comes out to chat.

In a new Queens cookbook, coincidentally released at the perfect time as so many eateries are closed, all the chefs come out, not to just make small talk, but to tell you their life stories. And those tales come alongside some of their best recipes.

The book is “The World Eats Here,” subtitled “Amazing Food and the Inspiring People Who Make it at New York’s Queens Night Market.” Penned by Night Market founder John Wang and his wife, the artist and oral history collector Storm Garner, the book is also loaded with photos of the chefs and their creations, most by John Taggart, along with sketches both informative and whimsical by Beth Bugler. It’s published by The Experiment.

Eighty-eight recipes from 43 countries and regions on five continents are included, many put on paper for the first time, along with the stories of the more than 50 chefs and vendors who shared them with the authors. All have appeared at the Night Market, which has run on summer Saturdays in Flushing Meadows Corona Park since 2015.

The recipes do not require special equipment and are budget-conscious, with ingredients that can be found in international supermarkets and ethnic grocery stores.

The book starts off in quintessential New York form with Berg’s Pastrami, by caterer Andrew Steinberg, a Flushing native. It takes eight days to make because the brisket has to cure for seven days. And even Steinberg’s tale, though all-American, is a bit exotic: With a Jewish father and African-American mother, he found he could fit in with everyone. “I don’t feel like people shunned me; I just felt like I was more accepted,” he said. “But growing up in Flushing, I think we look at ethnicity a little differently, because there’s at least 15 ethnicities in every class.”

Many in the book are immigrants or children of them. And many have other jobs.

Sangyal Phunstok, who works in the medical industry, serves up a recipe for Tibetan beef momos and tells his family’s tale of moving from their native land to Bhutan. Gladys Shahtou, who lived in Sudan, Ethiopia, the United States and Switzerland, all by the time she was 8, has one for tomato salad and one for eggplant salad. Lenin Costas tells how to make Peruvian ceviche with leche de tigre, and talks about traveling between here and his homeland. Judymae Esguerra, a native of the Philippines who made a career in finance and has lived in Chicago, San Jose, Calif., and New York, offers her recipes for rice porridge and leche flan. The variety of the cooks’ recipes and stories is endless.

Wang recognized the good and bad sides of the book coming out now when asked.

“Many of us seem to be spending a lot more time in our kitchens, which is a great opportunity to work through the cookbook!” he said via email. “Unfortunately this pandemic may have compromised some of the shopping experience associated with ‘The World Eats Here.’ One of the joys of cooking your way through the stories and recipes is the shopping adventure, scouring unfamiliar grocery stores and aisles for unique ingredients. But until those days are back again, you can still have the ingredients delivered or follow our substitution suggestions.”

Garner asked that New Yorkers, used to cuisine from all over the world, continue supporting small food businesses, especially those run by immigrants, and said:

“If that’s beyond logistic possibility right now for whatever reason, and, like us, you’re getting tired of your own home cooking repertoire, this book can help you feel like a real New Yorker again, in the best way: not only can you learn to make the tasty dishes from around the world that will spice up your quarantined life right now, but you’ll also get to know the people behind the recipes, as fellow New Yorkers who have, through their food and their entrepreneurship, become part of a beautiful, multicultural Queens community history.”