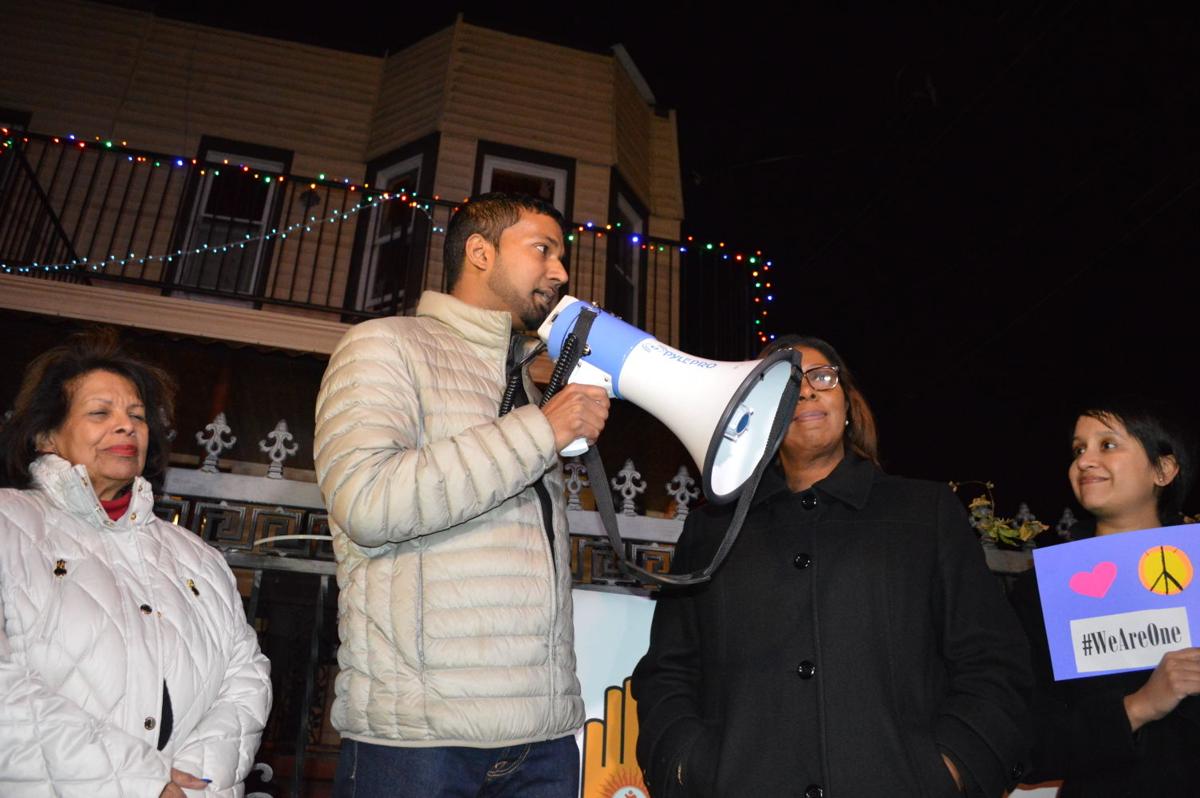 Community Board 9 member Richard David, with megaphone, calls for Hindus to stand up for their rights. 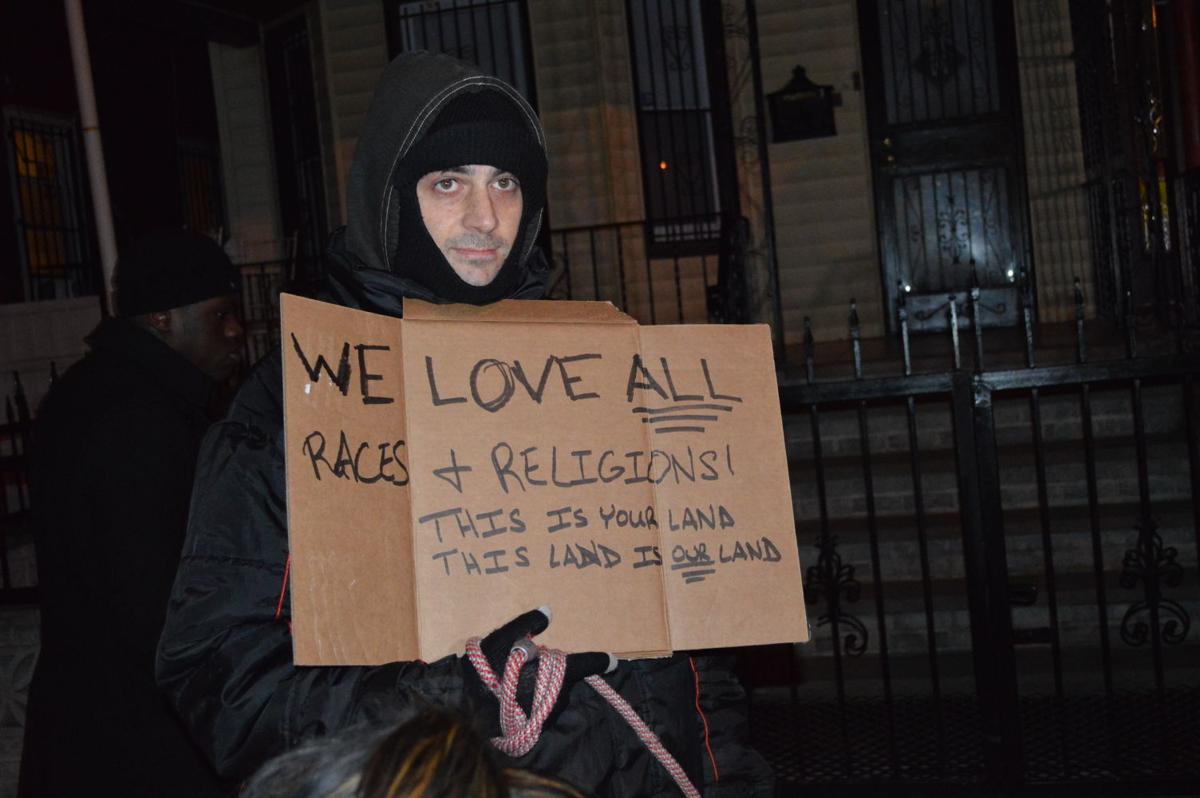 Community Board 9 member Richard David, with megaphone, calls for Hindus to stand up for their rights.

The message was simple, but loud on the streets of Woodhaven on Friday: "We are one."

"We gather as a diverse group, unified by love and oneness," Aminta Kilawan, co-founder of Sadhana: Coalition of Progressive Hindus, said at a rally in front of a home where 40 Jhandi flags were burnt early Thanksgiving morning.

Kilawan was joined by dozens of people from different faiths and ethnicities who stood in front of the house, at the corner of 80th Street and 89th Avenue, to condemn the hate act carried out by an arsonist who is still on the loose. The suspect was last seen wearing a baseball cap and a three-quarter-length jacket and carrying a medium-sized travel bag, according to police.

Jhandi flags are used in the Hindu religion - they come in different colors, bear the image of deities, and are put outside homes after prayers have been said.

They are a common sight throughout South Queens.

The Narine family, whose flags were burnt and did not appear at Friday's rally, said in a statement, "Although we feel hurt and we were afraid that something worse could have happened, we feel blessed that we are safe.

"We don't understand why someone would target our home," they continued. "If the perpetrator is found, we would like to try and talk with them to understand their motivation and explain about our culture and religion, which is peaceful. We want to build dialogue and trust to help the racism disappear. We have it in our hearts to forgive."

The family thanked the community for coming together in support of them and asked for privacy at this time.

While the flags were the main focus of Friday's event, those who spoke also reflected on the recent acts of terrorism carried out by the Islamic state and condemned the terror cell for invoking the name of Islam.

"It is very heartachening, regardless if atrocities are committed in the name of Islam or any other religion, when we see innocent lives are taken," Imam Safraz, of the Masjid Al Abidin mosque in Richmond Hill, said. "It is always my belief that religion is supposed to bring us closer together, it is not supposed to divide us."

It's necessary, Safraz and many others said, that whenever a hate act is committed against one group that people of all backgrounds come together to condemn it, as they did on Friday.

"Whenever there is a hate act in this city, all of us must respond immediately," Public Advocate Letitia James said. "We live in a city where we celebrate diversity. Whoever thinks they can divide us, let me tell you that you will not shake the bonds that tie us together as one."

For Naheed Bahram, member of the Flushing Interfaith Council, hate is something that happens too often.

"And I hope that this kind of gathering, where we stand with different faiths and different cultures, shows that we are all one." Bahram said.

Alfonso Wyatt, an elder at the Greater Allen A.M.E. Cathedral of New York in Jamaica, called the rally "a ministering of love."

"We are ministering because we understand that we are one," Wyatt said. "It is important that all of us stand with all of us so that we remind one another that if you hurt, I hurt. We are one."

Kenrick Ross, executive director of the Indo-Caribbean Alliance, also called for everyone to work together for there to be coexistence in New York and everywhere else.

"We have to make sure that all of us are accountable for creating an environment of respect and tolerance," Ross said.

Last week's incident was not the first time Jhandi flags have been desecrated, according to Community Board 9 member Richard David, who added that there have been many times in the past where hateful acts are not reported to authorities.

That has to change, he said.

"We're a silent community," David said. "Sometimes we don't stand up for our rights. And the truth is, we'll be disrespected and continue to be disrespected. What happened here is utter disrespect. We have to stand up because we are one."

Vishnu Mahadeo, president of the Richmond Hill Economic Development Corp., said this should be an opportunity for the Hindu community to educate people on the importance of Jhandi flags.

"And for us to be proud of that," he said of families displaying the flags. "That's why we put it at the front of our yard."

Kilawan said some Indo-Caribbean Hindu families have said flags should be moved to the back of homes in light of last week's arson attack.

"We should be proud of our heritage, proud of our culture, proud of our religion and we should not allow individuals like the one who committed this hateful crime to get to our mind such that we hide who we are," she said.

Some who spoke directed their comments at the arsonist, and at the end of the night $4,500 was raised for the arrest, indictment and conviction of him.

"We're sticking together," Assemblyman Mike Miller (D-Woodhaven) said. "To get this coward who committed this act of vandalism brought to justice."

Rep. Nydia Velazquez (D-Brooklyn, Manhattan, Queens) urged the NYPD to keep the pressure on the suspect and catch him as soon as possible.

"Because this is not who we are," she said. "We are better than this. Love and compassion and hope is better, always better, than this type of behavior. It has no place here, or in any other part of New York City."

But Martin Colberg, president of the Woodhaven Residents' Block Association, believes the perpetrator should make the cops' jobs easier.

"Do yourself a favor, turn yourself in," Colberg said. "And man up to your problems. You will be forgiven ... Close this chapter in your life and join this community that wants to come together. Because this is not the way we want to live."

Sanders added that Queens, and the rest of the country, will stay united.

"We are going to have one America for everybody," he said.

"We stand with your community more than you know," Adams said. "Hate will not be tolerated because it never wins."