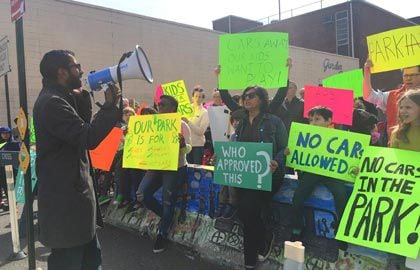 Shekar Krishnan rallies a crowd that last Saturday called on Koeppel Mazda in Jackson Heights to close its 78th Street service entrance so the city can turn the entire block south of Northern Boulevard into a pedestrian space. Most of it is already, but they say the proximity of vehicles and children creates danger. 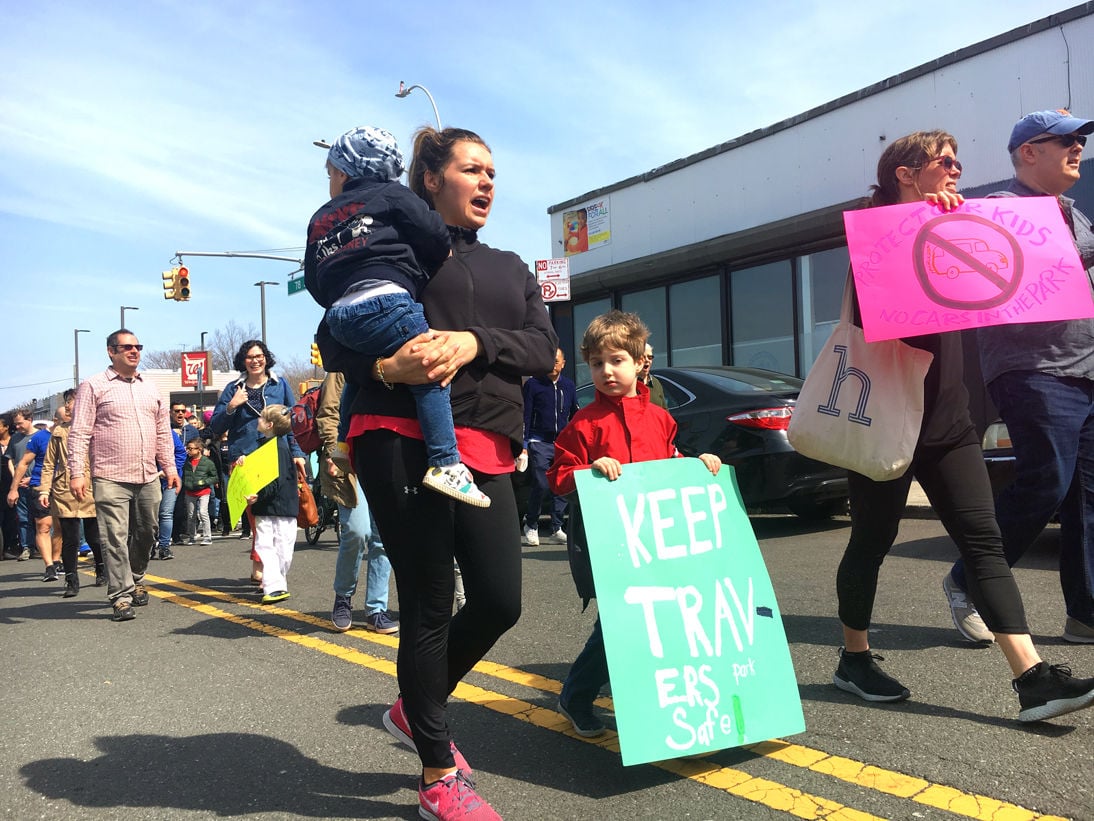 Jackson Heights residents protest the location of a service entrance at an auto dealership at Northern Boulevard and 78th Street, an entrance they believe brings cars dangerously close to children using the adjacent Travers Park and pedestrian plaza.

Shekar Krishnan rallies a crowd that last Saturday called on Koeppel Mazda in Jackson Heights to close its 78th Street service entrance so the city can turn the entire block south of Northern Boulevard into a pedestrian space. Most of it is already, but they say the proximity of vehicles and children creates danger.

Jackson Heights residents protest the location of a service entrance at an auto dealership at Northern Boulevard and 78th Street, an entrance they believe brings cars dangerously close to children using the adjacent Travers Park and pedestrian plaza.

Koeppel Mazda on Northern Boulevard has an entrance on 78th Street, where cars that need to be serviced enter. The street is adjacent to the park and was supposed to be a pedestrian plaza, according to original plans to redesign and expand the park.

More than 200 people, including many children, took to 78th Street near the park Saturday morning. They beat drums and chanted against the vehicles, booing when a red minivan drove onto the street and under the entrance’s automatic door.

Shekar Krishnan, a Jackson Heights father and Friends of Diversity Plaza member, said the dealership’s use of the road is a safety and environmental justice issue.

The dealership opened its doors in November 2018 after finishing renovations. Owner Howard Koeppel said the entrance is needed to conduct business. Without it, cars would have to enter on Northern Boulevard, which would create a real traffic hazard, he said.

“It’s not a playground,” Koeppel said of the street in question. “There’s no slides, no swings. It’s not even a whole street.”

Koeppel said he met with the departments of Parks and Recreation and Transportation last year, months before the service entrance was first used last November. That’s when he agreed to keep the street clean, ensure there’s a valet directing cars and stick to a 5-mph speed limit. He has no plans to close the entrance.

“The design is currently under review, but no changes have been finalized at this point,” a spokeswoman for the Parks Department said in a statement. “We look forward to continuing to work with the community on this project.”

The city broke ground on a reconstruction of Travers Park in April 2018 and expects to be finished by the fall of 2019. Additions include a great lawn, expanded play area and asphalt sports area.

A painted concrete barrier sits on 78th Street, just past the dealership but before the park’s entrance. Parents said it does little to make them feel safe.

Nadine Murphy stood near the front of the rally, holding a sign that read “Our park is for kids, seniors, families, athletes — not cars.” Murphy said she raised her kids in Travers Park.

“They’re using the street as a private driveway. This is the toddler section,” she said, pointing to the park’s nearest entrance. “How are [drivers] going to see a toddler?”

Kate Menken of People for Public Schools reminded the crowd of dangerous traffic in the area. Two days earlier, a 12-year-old boy was hit by a car outside IS 145, just two blocks from the park.

Menken said the boy remains in the intensive care unit and encouraged those in attendance to give what they could to help the family.

To end the rally, protesters marched from the concrete barrier onto Northern Boulevard — right in front of the dealership.

Marc Lacher, the executive manager of the Nothern Boulevard location, came outside during the rally. He spoke to residents for a few minutes before heading back inside.

After the march, Ada Aris sat down on the sidewalk in front of the service entrance. Her 3-year-old, Ara, sat in a stroller beside her. A few other parents and kids joined them.

“I feel like this is a much better statement,” Ada Aris said.