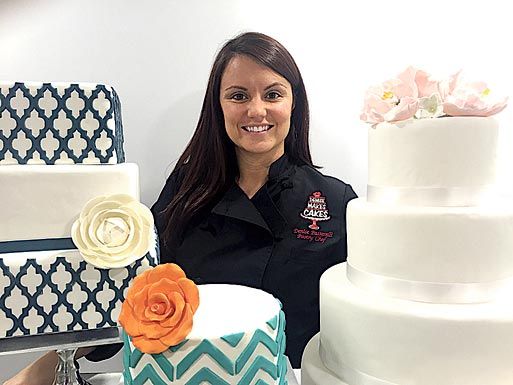 Denise Passarelli, of Middle Village, stands with two of the cakes she created. Tune into the Food Network on March 28 to see if her skills can win her $10,000 on the network’s hit show “Cake Wars.” 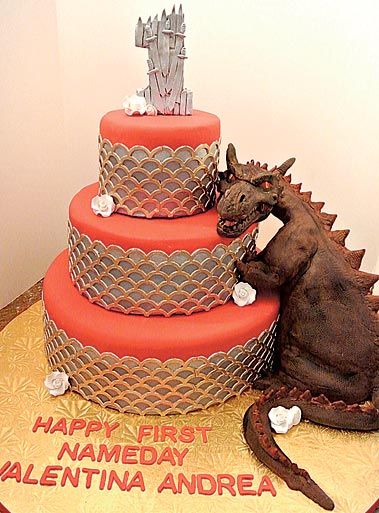 Denise Passarelli, of Middle Village, stands with two of the cakes she created. Tune into the Food Network on March 28 to see if her skills can win her $10,000 on the network’s hit show “Cake Wars.”

In just five short years, the Middle Village resident was able to channel her love of baking, birthdays and celebrations into a highly successful custom cake-making business simply known as Denise Makes Cakes.

In addition to her unique creations and growing roster of loyal clients, Passarelli has one more reason to celebrate: She’s earned herself a coveted spot as a competitor on an upcoming episode of the Food Network’s hit show “Cake Wars.”

She will appear on the March 21 episode.

Passarelli grew up in Middle Village, where she attended St. Margaret’s Elementary School, followed by The Mary Louis Academy in Jamaica Estates. She had enjoyed baking for family members and special occasions and while working in the field of radiation therapy, Passarelli decided to follow her heart and turn her hobby into a career.

“I always had a passion for baking,” she explained.

Passarelli took a leap of faith and enrolled in culinary school at night, even while maintaining her full-time day job in the healthcare industry.

In 2010, she graduated from the Institute of Culinary Education. Passarelli completed the institute’s Pastry and Baking Program the following year, along with its Culinary Management Program in 2012. As a testament to her tenacity and dedication, Passarelli would leave work each day only to spend her weeknights working long hours at a fine-dining restaurant to fulfill the school’s rigorous externship requirements.

In 2011, Passarelli decided to open her own business and launched Denise Makes Cakes. The bespoke cake business is run out of a small commercial kitchen and relies upon online orders through the company’s website. All of her recipes are original, custom creations made from the best ingredients and are designed to taste as good as they look.

“We want to make memories for people,” she said. “If you can dream it, we can make it for you. We can make everything from a small ‘Frozen’ birthday cake to a six-tier wedding cake covered in sugar flowers.”

As the business’ sole employee, Passarelli is truly a one-woman act. The entrepreneur personally oversees each cake’s creation, from initial client consultation and design to shopping for ingredients and delivering the final masterpiece.

In the five years since Denise Makes Cakes launched, Passarelli has created many show stoppers, including custom cakes made to look like airplanes, sports jerseys, running shoes and liquor bottles. Some of her more memorable confections include a three-tiered “Game of Thrones” cake, as well as a custom groom’s cake in the shape of the Ecto-1 vehicle from “Ghostbusters,” complete with blinking headlights and sirens.

Passarelli’s unique, over-the-top designs caught the eye of a prop designer at HBO last August. The network commissioned a special cake to use on the set of “Vinyl,” the upcoming series created by Mick Jagger and Martin Scorsese that explores the inner workings of a record company in 1970s New York City.

“I had to make two identical cakes for the show, just in case they didn’t get the shot with the first one,” Passarelli said. “That was my first time on a television set.”

It would, however, not be her last. After watching the season one finale of “Cake Wars,” Passarelli decided to take a chance and filled out an application to appear on the show’s upcoming second season.

“I was surprised, truthfully, when they called me,” she admitted. “I had applied for other baking competition shows in the past, and I’ve made it to the final round, but I never made it on to the actual show, so I was just kind of expecting this to be the same.”

Passarelli flew to Los Angeles in October to film “Cake Wars,” where she was one of four competitors vying for a $10,000 grand prize. As part of the show’s rules, Passarelli brought fellow Institute of Culinary Education graduate Poornima Solairajan with her on her “Cake Wars” quest.

The challenge for Passarelli’s episode was to create an elaborate cake with an extreme element, such as light, sound or movement, to celebrate the 75th anniversary of “Archie” comics. In addition to the show’s regular judges, “Archie” comics CEO and Publisher Jonathan Goldwater also joined the panel for the episode.

“I felt excited when I got there,” Passarelli said. “At first it was nerve-racking, but once the competition starts, you kind of get into the groove, your nerves sort of dissipate, and you have a focus and a task to get your cake done.”

She hopes to open a brick-and-mortar appointment-only custom cake studio in Queens within the next two years.

Due to incorrect information being given to the newspaper, this article originally misstated when the episode of "Cake Wars" will air. It will be on March 21. We regret the error.