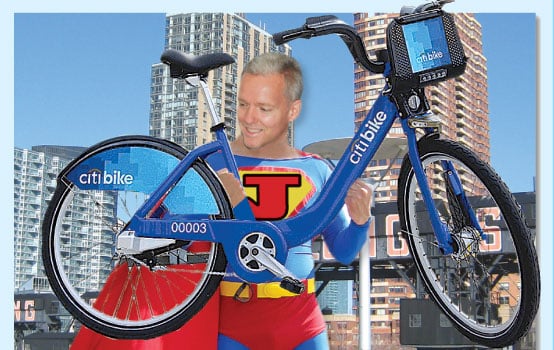 Councilman Jimmy Van Bramer used his apparent super powers to bring Citi sponsored bike share to LIC this year, after the city initially said not until 2013. 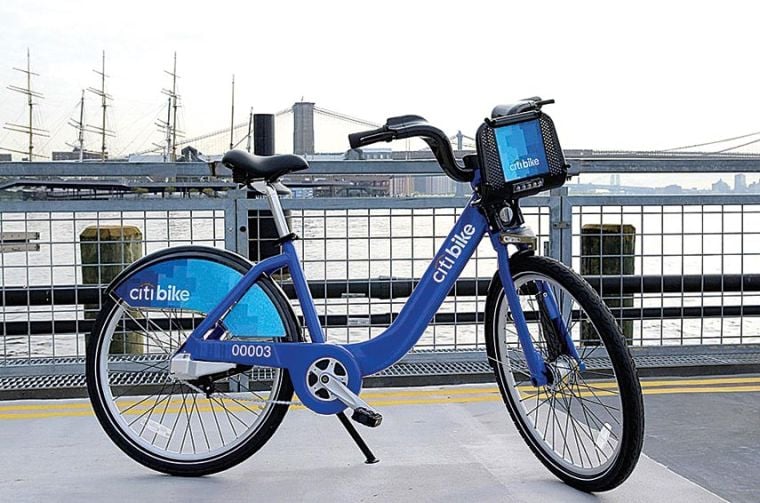 The popularized CitiBike has ridden into financial trouble, and the firm managing it is asking the mayor to use public funds to bail it out. Queens officials say while they want CitiBike to stay, they aren’t willing to use the city’s money so soon.

Councilman Jimmy Van Bramer used his apparent super powers to bring Citi sponsored bike share to LIC this year, after the city initially said not until 2013.

The popularized CitiBike has ridden into financial trouble, and the firm managing it is asking the mayor to use public funds to bail it out. Queens officials say while they want CitiBike to stay, they aren’t willing to use the city’s money so soon.

A bike share program will come to Queens this year after all.

The banking giant Citi, also known as Citigroup or Citibank, will install 10,000 bikes and 600 dock stations in Manhattan, Brooklyn and Long Island City. The bikes in the “Citi Bike” fleet will be branded with the bank’s name.

Mayor Bloomberg, Transportation Commissioner Janette Sadik-Khan, other officials and Citi CEO Vikram Pandit announced the deal on May 9 at City Hall Plaza. At the time Sadik-Khan said the $40 million project would come to Long Island City eventually, but did not say when. Andrew Brent, a spokesman for Citi, said the bikes would be available in LIC sometime next year.

However the plan quickly changed.

Councilman Jimmy Van Bramer (D-Sunnyside) on May 13, just three days after the announcement of the environmentally-friendly plan, said the bikes will roam the borough that has the company’s name on Queens’ biggest building and on the Mets stadium.

“You can’t have a citywide bike share program that doesn’t include Queens,” Van Bramer said.

Earlier, in a prepared statement, he said, "I want to thank the Department of Transportation for working with my office to make sure that Queens is a part of Phase 1 of Bike Share. The 10 proposed locations will not only facilitate commuters into and out of Long Island City but it will also attract new visitors to all the fantastic cultural and culinary options the neighborhood has to offer.”

Though many people in Western Queens are happy about the plan, not everyone is.

Officials said the program will not use any taxpayer money, but Woodside resident Catherine Volpe questions that statement.

“There can’t be completely no city money. Who paints the bike lanes? Have Citi pay for after-school,” said Volpe. “They are going through the budget dance, no sense of priority. They are cutting after school care and senior programs.”

Citi Bikes will come with a rules-of-the-road pamphlet, but Piazza is skeptical this will help prevent bad biking behavior. He also wondered if this would take away from MTA profits.

“No, not an issue. Ridership is trending up,” a MTA spokesman said.

Community Board 2 will host a forum on May 21 at the NY Irish Center, 10-40 Jackson Ave., from 7 to 9 p.m., to discuss the proposed locations. If the spots get approved, the bicycles will be in place by July.

Prior to May 21, the city held an online forum where residents could vote for locations.

A handful of businesses located near the docking stations didn’t want to talk about the program. The few that commented, did not have a strong opinion.

“I don’t know how I feel yet. I don’t have much of an opinion yet,” said the manager at Bella Via on 48th Avenue and Vernon Boulevard.

“A lot of people already bike to work. It might make parking easier, but probably won’t make much of a difference either way,” said Natalia Chin, administrative assistant at Green Light Expediting on 21st Street and 43rd Avenue.

Participants will pay $95 a year to join the program, which will give them unlimited use of the bicycles for rides of up to 45 minutes. Members using them for a longer time will pay graduated fees to do so. Daily and weekly memberships will also be available. Participants have to be at least 16 years old. They will borrow the bicycles from and return them to the stations.

Portland, Ore.-based Alta Bicycle Share, which will split the profits with the city, will operate the system. MasterCard will be the “exclusive payment sponsor,” the city said.

Hurricane Sandy made a soggy mess of some the CitiBank-sponsored bike share equipment and has postponed the program yet again.

I am a bicycle rider and a commuter and I think that Bike Share accessibility is important for everyone in Queens and everyone going to Queens!
The opinion that cyclists using the bike share system will be inexperienced is without merit ... are car rental companies going out of business? I am, let's just say, a 'seasoned' cyclist & commuter and on my visits to Boston I use their Bike Share program every time. Boston's program saw the opportunity to fill a gap in their downtown public transportation system by giving people a quick way to get across town at any time of day or night at a reasonable cost - I've not seen a wayward rider yet.
The opinion that only commuters will use the bikes doesn't do Queens justice - Bike Share will be there for residents that are not everyday cyclists... those of us that want to warm up to riding in the city and not have to worry about the price of a bicycle or a place to store it, ones that remember riding, but it's been awhile.
Also residents like myself that have guests visiting but no extra bikes at home - I mean who has the space! What a great opportunity this will be!
And don't forget the visitors to the city that are trying to see more of Queens than their already-fatigued walking legs can carry them - they will be able to take in ALL of the museums that Queens have to offer in a day (or at least try!) rather than just one or two.
As for commerce near a bike station or anywhere for that matter... it's easier to stop and shop when you are on a bicycle than in a car!
It's a win-win-win-win- - - !! Support it !(Edited by staff.)