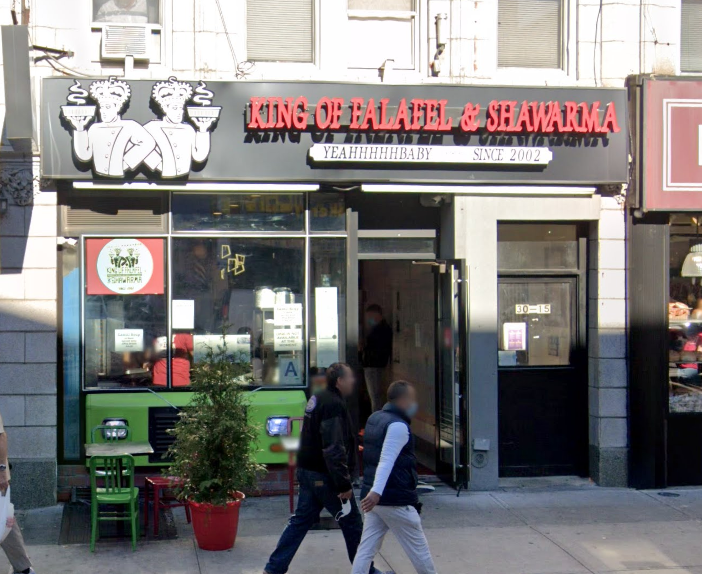 King of Falafel & Shawarma in Astoria was inundated with tens of thousands reviews from pro-Saudi trolls after it displayed criticism of the crown prince. 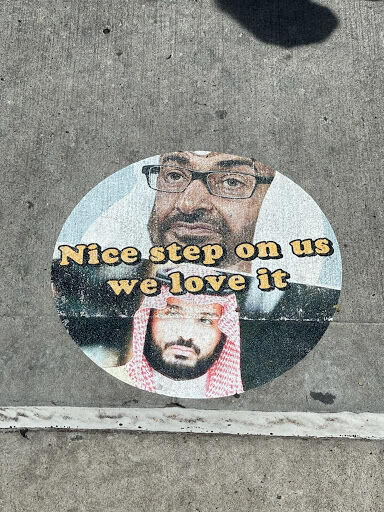 The Astoria falafel shop displayed a social distancing floor decal with pictures of Mohammed bin Salman, the crown prince of Saudi Arabia, and Mohammed bin Zayed al-Nahyan, the ruler of the United Arab Emirates, with an invitation to step on their faces.

King of Falafel & Shawarma in Astoria was inundated with tens of thousands reviews from pro-Saudi trolls after it displayed criticism of the crown prince.

The Astoria falafel shop displayed a social distancing floor decal with pictures of Mohammed bin Salman, the crown prince of Saudi Arabia, and Mohammed bin Zayed al-Nahyan, the ruler of the United Arab Emirates, with an invitation to step on their faces.

A beloved falafel restaurant in Astoria has been getting sha-warmed by Saudi loyalist trolls in response to its owner’s criticism of the crown prince.

King of Falafel & Shawarma, a restaurant with a brick-and mortar site on 30-15 Broadway and food trucks in Manhattan and Astoria, got over 37,000 scathing one-star reviews within a span of 30 hours earlier this week.

Its owner, Freddy Zeideia, said the reviews came from trolls who targeted KOFS after, @Columbuos, a pro-Saudi social media account, shared a video of the restaurant's social distancing floor decal with pictures of Mohammed bin Salman, the crown prince of Saudi Arabia, and Mohammed bin Zayed al-Nahyan, the ruler of the United Arab Emirates, and an invitation to step on their faces.

The KOFS patron who originally filmed the video made an inflammatory attack on Saudi Arabia in Arabic after entering the restaurant, according to a translation of the video that has surfaced online.

The pro-Saudi influencer shared a link to the restaurant’s Google page and encouraged his followers to give the restaurant a one-star rating.

Zeideia, who is originally from Palestine’s West Bank, has not shied away from proudly displaying his political beliefs. In response to the Israel-Hamas violence in May, he displayed a Palestinian flag in the front window.

Earlier in the summer, he installed a similar floor decal with Andrew Yang’s face after the mayoral hopeful pledged solidarity with Israel.

The floor piece that upset the influencer was aimed at criticizing Saudi Arabia’s war in Yemen and the UAE’s military intervention in Libya's civil war. Zeideia said that the trolls were also aggrieved that he had posted a PRIDE flag honoring the LGBTQ awareness month.

Contacted by the Chronicle on Friday morning, Zeideia was remarkably unflustered by the attacks on his business.

“I'm not gonna stress myself. I know my Astoria. I know my people out here and they know who we are. We've been serving them for the last 20 years,” he said.

Google has picked up on the sudden influx of reviews and temporarily suspended anyone from making reviews of the restaurant, and it appears that Yelp has done the same as it investigates the recent reviews.

The remaining problem, Zeideia said, was the inundation of international phone calls.

“They said they're going to chop me to pieces the way they did to Jamal Khashoggi,” Zeideia said.

Other calls threatened to burn down the store. All are nonsense, Zeideia said.

While he didn’t seem to believe that the threats to his life, or to his business for that matter, were credible, he did admit that it was a pain to have his phone line constantly tied up.

“It's going to take a couple of weeks before things have slowed down. I'm going to let them bark on their own for a while,” Zeideia said.

The story has been updated with comments made by the patron who filmed the viral video of KOFS.

You deserve what you got.

The Saudi government and people always supported the Palestinian cause.

The restaurant offers racism to the customers, by insulting the leaders of the Gulf and its people.

I hope from Google and Yalb and the community as well as the newspaper They know the video was racist from the restaurant and the owner.

The Saudis don't give a $hit about Palestine and Palestinians, and they haven't since the Sudairis murdered King Faisal, the only Saudi King who cared about Palestine. The current crown prince when he isn't busy murdering yemeni children, is a collaborator of the settler colonial entity along with the shameless Bin Zayed. Shame on all Khaleejis who defend their dictators and this treacherous "Abraham Accords"(more like the Judas Accords) they conspired with Jared Kushner and Bibi Netanyahu, and look the other way in the ethnic cleansing of palestinians in the west bank and east Jerusalem.

And no its not racism to criticize your "beloved" murderous shaitan Crown Prince Bin Salman, who likes to chop up journalists and dissolve them in acid. Palestinians have respect for King Faisal when he was there and he spoke up for the dignity of Palestinians, but the current leadership is absolutely shameless.

"The restaurant's social distancing floor decal with pictures of Mohammed bin Salman and an invitation to step on their faces." Why would you do this to yourself?

It is the right of Palestinians to criticize Bin Zayed and Bin Salman for their schemes with Jared Kushner to legitimize the theft of Palestinian land and Palestinian expulsion. These people try to present the conficlt as some religious conflict by calling it the "abraham accords" but it is not, there are Palestinain christians and Palestinains muslims who are both victims of land theft and ethnic cleansing by the settler colonial entity.

He published a racist video against Saudi people, and what happened is a reaction of that video. Racism is not tolerated in the US. To see the full picture, I will ask my friend to translate the racist video, and I will share it with you.

The owner of the restaurant is a climber, racist and anti-Semitic, adding homosexuality in his Google profile, except when we started our reaction to win the sympathy of the LGBT community and climb their rights.

I sympathize with the gays because of these climbers.

The Israelis have the right to protect their land that they bought from you with their money and to protect their sacred right. Why do you want us to usurp their land after you sold it to them while you demand the American citizenship that you curse in the East and claim that you love it in the West?

Why do you call us infidels, you bullies, and mobilize extremists, because of our relationship and friendship with Christian America, and want us to fight them? Why do Palestinians support extremism and incitement against Christianity and Jews and denigrate the Saudis here in America and claim love for all?

Israel has the right to protect the land it bought from you, and we do not enter into wars of hatred and remorse