Carlos Amador will use aerosol paint and canvas to create a work on the spot at the Viva la Comida festival on Friday. 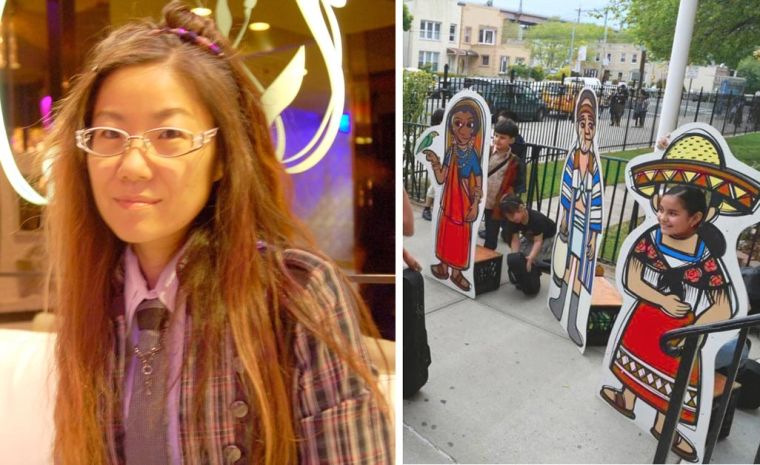 Artist Rica Takashima will bring her array of “peekaboo” art boards to the Viva la Comida festival on Friday.

Carlos Amador will use aerosol paint and canvas to create a work on the spot at the Viva la Comida festival on Friday.

Artist Rica Takashima will bring her array of “peekaboo” art boards to the Viva la Comida festival on Friday.

Artists Rica Takashima and Carlos Amador will create and display their works at the second annual Viva la Comida Festival on 82nd Street off of Roosevelt Avenue.

The Hibridos Collective, a relatively new Jackson Heights-based art group, picked the artists to add to the music, arts and crafts and food at the event.

Takashima, who moved to Elmhurst and then Astoria from Japan four years ago, will showcase her series of life-sized people painted on wood boards with a cutout circle where people can stick their faces through, as at amusement parks.

“You get to try being other people and see what it could be like,” Takashima said. “I hope this can create a little bit of peace and understanding.”

They are playful and look like they sprung from the pages of a comic book. (Takashima has received praise for her manga, Japanese comic book style. )

She has been working with this concept for 19 years with different themes from gender to family. Her most recent theme is called “Aliens in New York,” a series of paintings of people in traditional clothes from all over the world. Taskashima said her inspiration came from when she immigrated to the United States and saw her status was described as alien on her documents.

For the festival Takashima is aptly bringing about 20 “peekaboo” boards of food — bread and coffee are two— and many of people in traditional garb from South America.

Amador, who lives in Jackson Heights, will come to the festival armed with aerosol cans and a canvas.

Since moving from Mexico in 2002 he has been painting murals and canvas works of traditional Mexican scenes. The people in his paintings look realistic with vivid shading and rich colors.

“It’s about ancestors and traditions and sharing that with people,” Amador said.

His heritage is what he focused on for a live painting he created in June at the Jackson Heights Art Festival at Diversity Plaza, at 37th Road between 73rd and 74th streets, also curated by the Hibridos Collective.

For Viva la Comida, Amador will focus his spray paint on the topic of corn.

“It’s so important for many countries — Mexico and the United States,” he said.