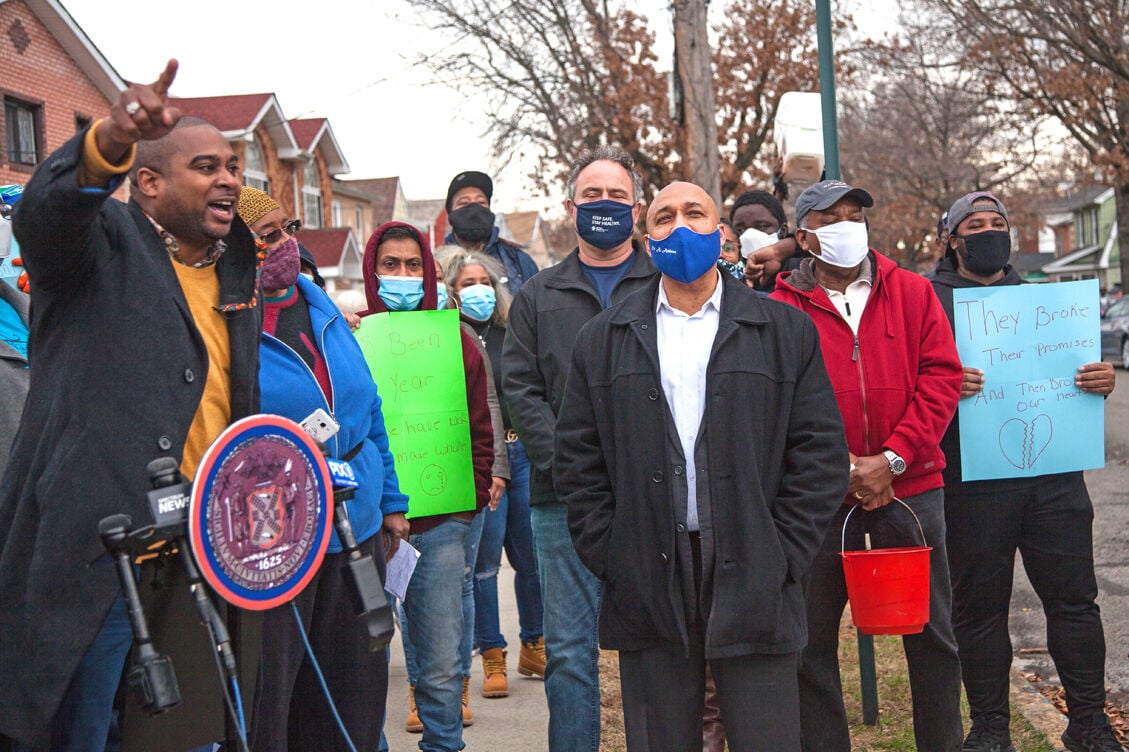 Those affected by the sewage backup from last Thanksgiving say that the city has still not adequately reimbursed them for the damage to their homes, which was found to be caused by a collapsed sewer pipe. The 149th Street South Ozone Park Civic Association president, Khari White, left, addresses homeowners and elected offi cials who urged Comptroller Scott Stringer to remedy the reimbursement process. 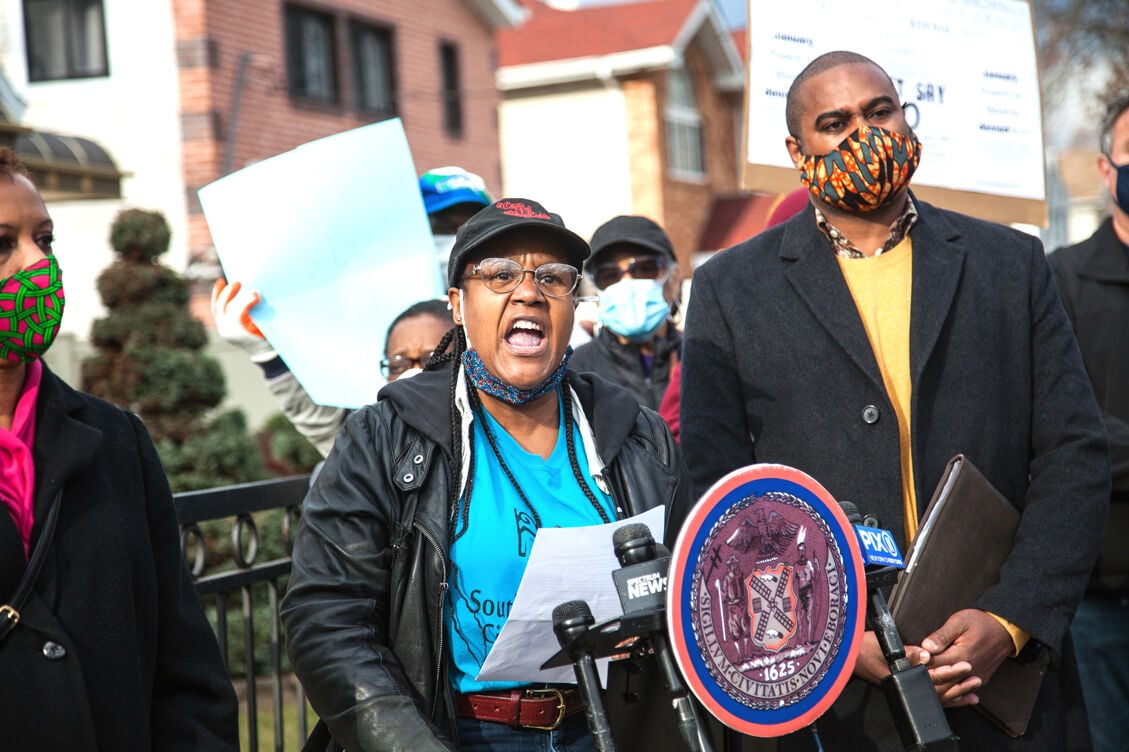 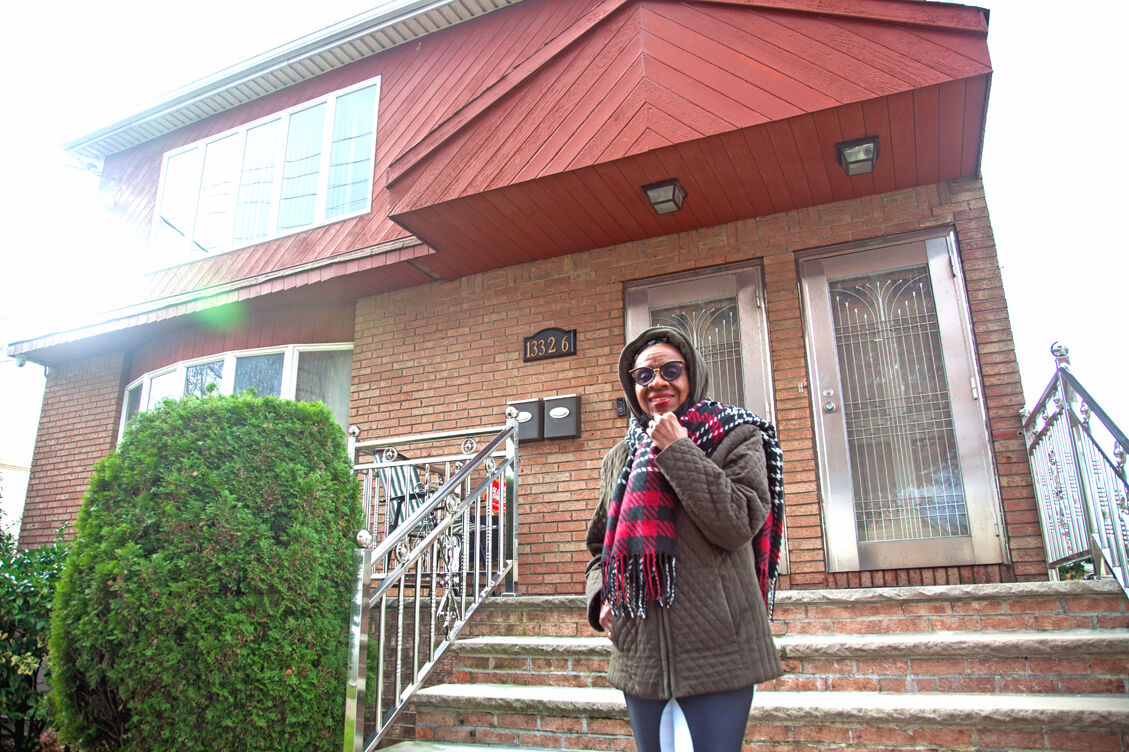 Olive Harrielal accepted an offer for sewage damages that she says is a fraction of what she spent.

Those affected by the sewage backup from last Thanksgiving say that the city has still not adequately reimbursed them for the damage to their homes, which was found to be caused by a collapsed sewer pipe. The 149th Street South Ozone Park Civic Association president, Khari White, left, addresses homeowners and elected offi cials who urged Comptroller Scott Stringer to remedy the reimbursement process.

Olive Harrielal accepted an offer for sewage damages that she says is a fraction of what she spent.

A year after raw sewage flooded over 100 houses in South Ozone Park, destroying what it came in contact with and displacing residents to hotels, affected residents say they’re faced with another disaster: city bureaucracy.

A group of residents from the neighborhood rallied with local elected officials at 133rd Avenue and Inwood Street on Saturday to raise concerns over the way city Comptroller Scott Stringer’s office has handled the process of reimbursing residents for resulting damages.

“The comptroller promised residents a fair and expedited process back to a life of normalcy. None of us have been made whole. Many of us have not been made offers at all,” said Aracelia Cook, vice president of the 149th Street Civic Association.

In the wake of the disaster last year, Mayor de Blasio and Stringer, who is a frontrunner in the 2021 mayoral race, toured through the area and promised that the city would reimburse residents for the damages that were later found to be caused by a collapsed pipe in the sewer main.

When many of the residents who went through the process of filing a claim began receiving offers from the Comptroller’s Office, they were disappointed with its initial offers. Others still have not received one.

Those who have received offers say that it was never made clear to them how the figure was calculated or that they could negotiate for a better payout.

Offer letters urged homeowners to accept it within a 30-day timeframe — a move that advocates and the civic organization say was meant to rush them to accept an offer that was lower than they deserve.

“The real issue is that they’re low-balling people, and they’re in this position that they’re just accepting offers because they don’t know how to fight,” said Queens College professor Natalie Bump Vena, who has undertaken a role of helping residents share information. “They’re broke from the pandemic and they’re scared that if they don’t take this they’re not going to get anything.”

In mid-November, 22 city councilmembers signed on to a letter that Councilwoman Adrienne Adams (D-Jamaica) wrote to de Blasio and Stringer demanding that the homeowners be able to amend their claims, make new ones, receive mold inspection and get more transparency in settlement calculations, among other things.

“To date, our office has offered settlements on 85 percent of claims that are before us. We’re committed to this important work and doing everything possible to help New Yorkers get back on their feet,” said comptroller spokesperson Hazel Crampton-Hays in a statement to the Chronicle.

In response to the councilmember’s letter, Stringer wrote back acknowledging that there is a “longstanding gap of resources available to New Yorkers filing claims against the City without attorneys.”

He diverted responsibility for the low settlements to the Bureau of Law and Adjustment — which is part of his office — as the agency that determines and apportions an amount due in claims against the city. While his office regularly assists claimants by advising them on timelines and conducting hearings, it “is unable, as a legal matter, to become an adverse party to the city of New York by concurrently advocating for both the city and the claimant,” Stringer wrote.

To date, the office said it has offered settlement on 86 of the 101 claims from South Ozone Park residents and settled 61 of those claims for a total payout of $755,012.88 — an average of $12,377. Advocates and residents have disputed the number of claims. Cook, of the 149th Street Civic Association, said that the office previously told her it had received 147 claims. After Bump Vena sent a freedom of information request for documents related to assessing damages for the claimants of the sewage backup, she got a response back that there were over 200 claims that fit her description.

At the rally, residents made it clear that they were not happy with the comptroller’s guidance and communication. One of the affected residents, Winnifred Robinson, said that she had received a settlement offer for $4,000 in early November, and had avoided accepting past her 30-day window because she wasn’t satisfied with the initial figure and the Comptroller’s Office was slow to get back to her.

“A bunch of people thought that what they got were take-it-or-leave-it offers,” said Gorenberg.

Rishad Mubarak, who bought his house four days before the disaster, said at the rally that he still was waiting for an offer of compensation.

Olive Harrielal said that when she objected to her initial offer, someone from the Comptroller’s Office provided her a negotiated figure with an additional $3,000 but that was still just a fraction of what repairs would cost. She begrudgingly accepted it due to financial strain.

“It’s been a bit of black box with what is going on inside the city agency,” said Gorenberg. “It’s not clear what they’re looking at, what they need to be provided or what they’re using to base an adjustment. That contributes to the turmoil and confusion.”

Since the statute of limitations for suing the city expires at the end of February 2021, Gorenberg said that NYLPI lawyers intend to help residents pursue the comptroller’s settlement process before launching suits.

Bump Vena has echoed Adams’ call for the comptroller to allow residents to either amend their applications or make new ones.

Gorenberg said the most immediate issue is creating clear communication about negotiating and accepting offers.

“Clean up the communication channels and dig in so that people are compensated fairly,” she said.