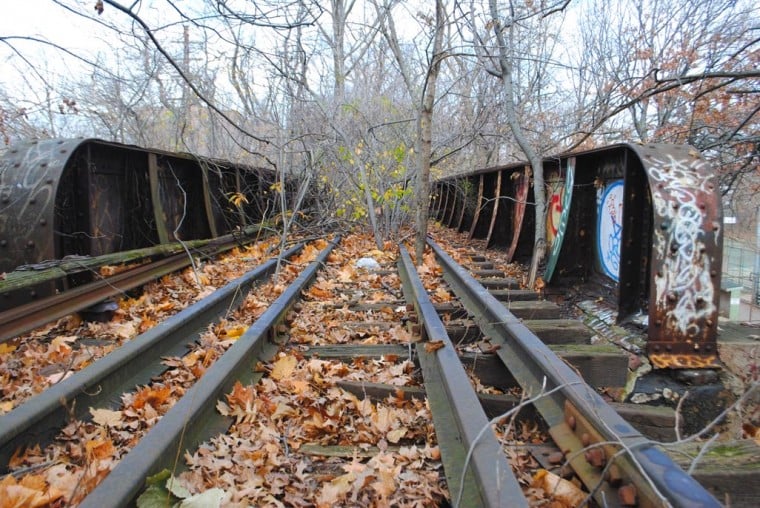 A trestle carries the same railroad tracks across Fleet Street in Forest Hills as it did 49 years ago, when the Long Island Rail Road abandoned the Rockaway Beach Branch line. A Queens group is looking to turn a 3.5-mile stretch of the old line into a public greenway. 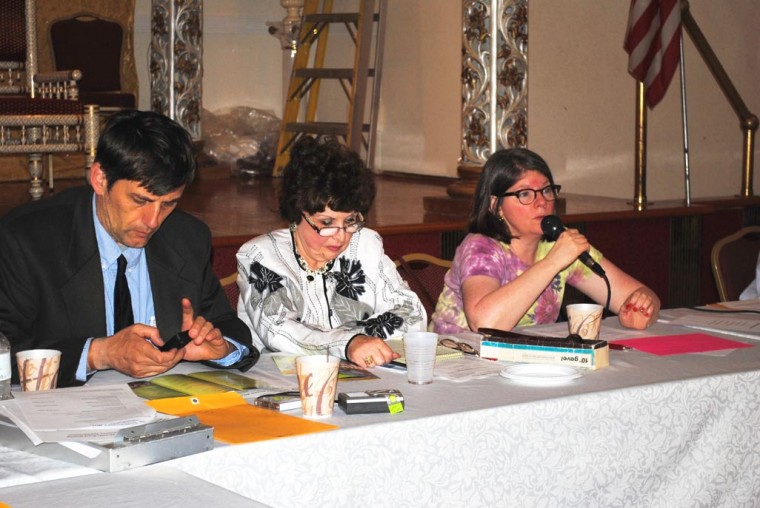 A trestle carries the same railroad tracks across Fleet Street in Forest Hills as it did 49 years ago, when the Long Island Rail Road abandoned the Rockaway Beach Branch line. A Queens group is looking to turn a 3.5-mile stretch of the old line into a public greenway.

A group of residents and community leaders are trying once again to create an elevated greenway along a 3.5 mile stretch of long-abandoned railroad tracks in Queens.

The old Rockaway Beach Branch of the Long Island Rail Road last carried a train during the Kennedy Administration, being dropped from service by the LIRR in 1962.

Its trestles and platforms still are in place, as are most of the tracks and a few towers, now long overgrown with trees, shrubs and vines. Any and all manner of trash and junk have been dumped and accumulated on the right of way.

But Andrea Crawford, president of Community Board 9 and one of the leaders of the Rockaway Beach Branch Greenway Committee, sees an opportunity to link Rego Park and Ozone Park by turning the roadbed into a high-line park, as the tracks are owned by the city.

“Rail-to-trail programs are popular all over the country,” Crawford said. “There is a big move to open areas that can be used as greenways ... We’re really interested in giving green space to places that don’t have a lot of it.”

The stretch runs roughly from 63rd Street in Rego Park down to Rockaway Boulevard, ending not far from the Jamaica Bay preserve.

Some is at ground level, much is elevated and some areas have been overtaken by industry, ballfields and other development. But the Greenway Committee, which is gathering signatures in an attempt to compel action on the plan, feels the benefits would be myriad.

Crawford says the group envisions a public park where people could walk, hike, bike or relax along a path roughly parallel to Woodhaven Boulevard.

She also said the city and MTA have repeatedly stated that they have no intention of ever restoring the line to service.

“It’s not like it is a viable track anymore,” she said. “There are some places where the tracks don’t exist anymore. It’s not like tomorrow you could flip a switch and there would be a viable railroad. It would be a multi-billion dollar project.”

The city’s Parks Department did not comment on the plan. But even if the city were to give its full blessing, the appeal of a high-line park was not universal in 2007 during the last serious effort to get approval.

Back then, members of Community Board 6 voted down a feasibility study of the project, 14-9. Opponents cited the possibility of increased noise, litter, crime and other consequences that would impact on quality of life and property values.

Michael Perlman, chairman of the Rego-Forest Preservation Council, said his group has not reached a formal consensus on the idea. But he personally would like to see some sort of trail concept gain traction.

“It would be a huge benefit to the communities if that were transformed into a park,” Perlman said. “It would connect communities and offer a welcoming atmosphere.”

Perlman said there is American as well as local history in evidence as well, with plaques on some of the trestles showing them built by the now 111-year-old American Bridge Company in 1908.

I think Woodhaven and the affected areas need both mass-transit and more trails, but if you have to choose they need better mass-transit options more than they need a trail. There are already plenty of walking trails in Forest Park. This is a rare example of almost completely intact right of way stretching from Rockaway to Roosevelt Avenue, and potentially to link up with ROWs on into the Bronx across the freight train bridge. Right of way in super built-up areas like Queens are priceless. People complain about depressed towns and depressed home values, but in the long-term the future of the city is to be more dense in the Bronx and Queens. People's property values would skyrocket were there an express mass-transit line running this route. People would certainly be injured by the noise along the route, but there is a way for injury to be made whole - money. For the minority of neighbors' objections to keep communities economically depressed is not to the long-term benefit of Queens. I was raised in Woodhaven, and have walked this 'trail' many times. It breaks my heart to think of all those abandoned, rotted stations. They closed because the LIRR was running them, and couldn't make it work on their budgets, multi-zone fare system and volume needs. The MTA however, with the structure of their long-term capital plans, can pull it off with the volumes. Crawford's opinion about 'viable' track, and what the MTA has sworn to do or not do, is just a self-serving statement. For all that we like cars in eastern Queens, we all know in our hearts that the subway and buses are the city's circulatory system and carry its lifeblood. When they're sick, it means the city is sick. When they're growing, the city is growing. The time of America's cities is returning.