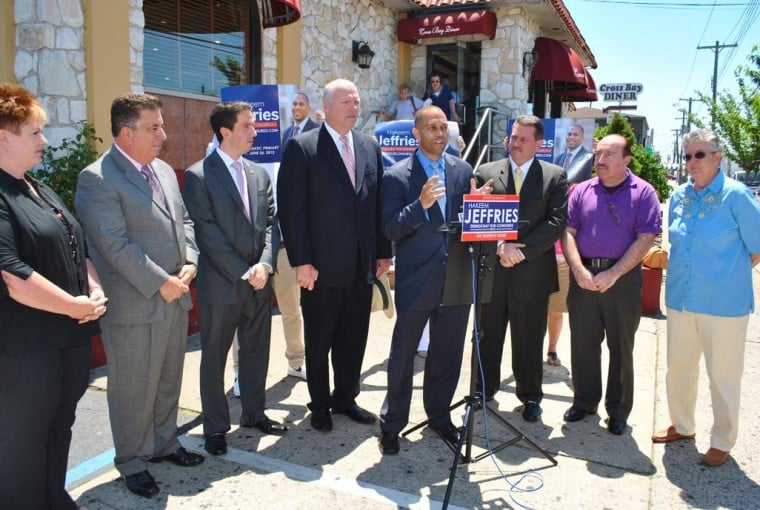 With the June 26 primary breathing down their necks, Democratic candidates running for the congressional district that covers Howard Beach and Ozone Park are making last-ditch efforts to lure voters to the polls, crisscrossing neighborhoods and touting endorsements —including those of Queens Democratic heavyweights for Assemblyman Hakeem Jeffries (D-Brooklyn) and that of U.S. Rep. Ed Towns (D-Brooklyn) for Councilman Charles Barron (D-Brooklyn).

Jeffries and Barron are vying to replace Towns, who announced a couple months ago that he would not run for the 8th Congressional District after representing the area for about three decades.

Both candidates have landed major endorsements, though high-profile Queens leaders are backing Jeffries, saying the Brooklyn legislator will not forget about the South Queens constituents who make up a small portion of the recently redrawn district, most of which was formerly in the 10th Congressional District.

“Howard Beach and Ozone Park, these will not be forgotten parts of the district,” U.S. Rep. Joe Crowley (D-Queens, Bronx), chairman of the Queens County Democratic Party, said at a press conference last Friday outside the Cross Bay Diner in Howard Beach announcing his, and other Queens Democrats’, endorsement of Jeffries.

Jeffries noted the vast differences in the newly drawn 8th District — which, along with Howard Beach and Ozone Park, includes neighborhoods like Bed-Stuy and Coney Island, joking he has “been getting a lot of use out of my GPS.”

Howard Beach and Ozone Park are now situated in the 9th Congressional District, represented by U.S. Rep. Bob Turner (R-Queens, Brooklyn). During the redistricting process, when state legislators are tasked with redrawing the political lines for Assembly, state Senate and Congressional districts once every 10 years, Turner’s district was one of two in the state to be axed — a byproduct of the U.S. Census reporting New York’s population had not grown as much as in other states.

With both candidates vying for the 8th district hailing from Brooklyn, and the Queens neighborhoods making up a small portion of the area, legislators and civic leaders have expressed concern about the borough getting the political shaft. But on Friday, that sentiment seemed to have dissipated.

“He told me he’d represent all the people, all the time,” said Democratic District Leader Frank Gulluscio. “When he said ‘all,’ I knew he was our guy.”

State Sen. Joe Addabbo Jr. (D-Howard Beach) said he needs a “federal representative I can work with” on issues that his constituents routinely come to him with, such as immigration and citizenship.

Calling Jeffries “an inspiration,” Assemblyman Phil Goldfeder (D-Ozone Park) also agreed that the Brooklyn politician would “really focus on all parts of his district.” And Community Board 10 Chairwoman Betty Braton said Jeffries, upon learning of the new district lines, “immediately reached out to find out what our issues are and how we can work together.”

Barron, who recently landed Towns’ endorsement, has said in interviews with the Queens Chronicle that he too would focus on Howard Beach and Ozone Park, though his background as a former Black Panther who has made racially incendiary comments has drawn concern from residents in the area. In a 2008 Daily News article about a Queens jury dropping charges against a white Howard Beach man who had allegedly threatened to torch his black neighbor’s house in 2007, Barron was quoted as saying, “there are enough racists in Howard Beach already —they don’t need a signal from the DA to think it’s okay to hate black people.”

Crowley said Barron did not seek the endorsement of the Queens County Democrats.

“People in Queens need the same things people everywhere need —safe communities, economic development, job creation, better healthcare,” Barron said in a previous interview with the Queens Chronicle. “Those are the same issues around the district … And I’m open to hearing what people in these new parts of the district need.”

Towns, who has long had a contentious relationship with Barron, endorsed the councilman in a move that surprised political insiders, who noted the congressman once called Barron a “bomb thrower,” while the councilman has accused the representative of being “missing in action.”

“Let me begin by saying, so there is no question — I’m endorsing Councilman Barron for Congressional District eight,” Towns said. “One might ask the question ‘why?’ Well I’m glad you asked the question. We need a strong voice in Washington DC. A person that’s independent and is going to tell it like it is.”

The New York Times and the New York Post —two papers whose editorial boards do not often see eye to eye —both endorsed Jeffries, as did the Daily News, while the Amsterdam News backed Barron. U.S. Sen. Kirsten Gillibrand (D-NY) recently came out against Barron.

“Any candidate who is anti-Israel does not share Sen. Gillibrand’s values,” Glen Caplin, a spokesman for Gillbrand, wrote in an email to the Weekly Standard.

Over the years, Barron has made comments questioning the state of Israel, and, according to a 2010 article from usariseup.com, said Jewish residents “only make up 20 percent” of Crown Heights, “but they’ve always walked these streets as if they owned them, and acted as if they are the only ones in the community that matter.”

The addition of Howard Beach and Ozone Park to the 8th Congressional District brings new demographics to a political landscape that has been predominantly black and often perceived as more liberal than the two Queens neighborhoods.

“I think there’s an opportunity to show how far we’ve come in New York City, that we can have a district with Bed-Stuy and Howard Beach,” Jeffries said, responding to a reporter’s question about “racial tension” in the area. “… I’ve represented every single group, regardless of race.”

Crowley emphasized that the “incident” to which the reporter was referring —the 1986 altercation that began on Cross Bay Boulevard in Howard Beach between three black men and a group of white teens and resulted in the death of Michael Griffith, 24, who was hit by a car while trying to escape — “took place a quarter of a century ago.”

“Our city and country have changed,” Crowley said.