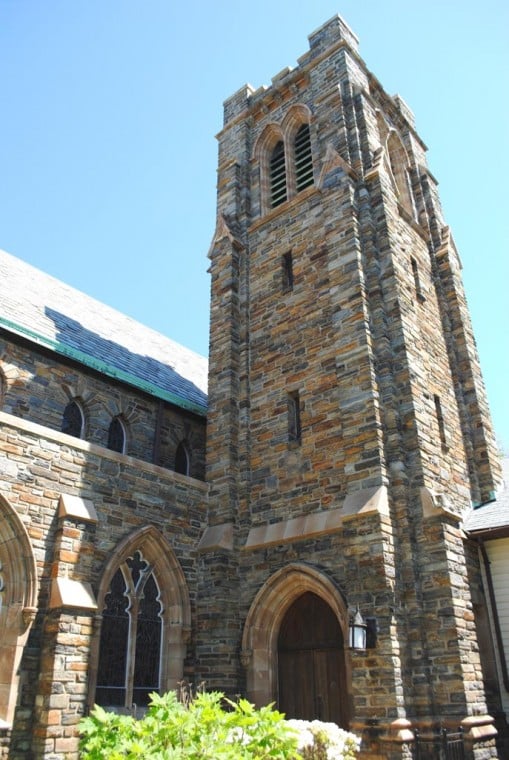 Residents are worried what could happen to the church, built in the late Gothic Revival style, after it closes. 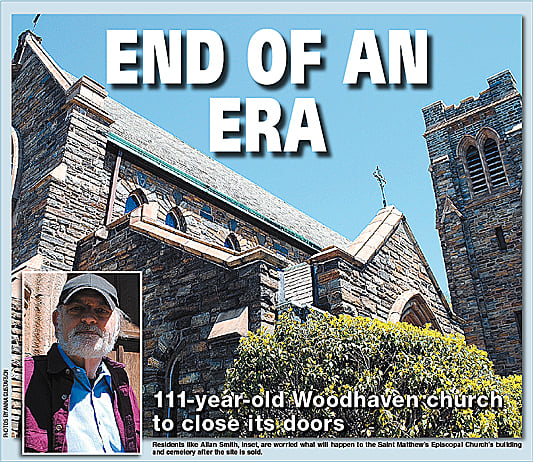 Residents like Allan Smith, inset, are worried what will happen to the Saint Matthew's Episcopal Church's building and cemetery after the site is sold.
1 of 2

Residents are worried what could happen to the church, built in the late Gothic Revival style, after it closes.

Residents like Allan Smith, inset, are worried what will happen to the Saint Matthew's Episcopal Church's building and cemetery after the site is sold.

The impending closure of the beloved 111-year-old Saint Matthew’s Episcopal Church in Woodhaven is sending shadows across a community whose residents worry the diocese could sell the site to someone with little reverence for the historical building and the cemetery behind it.

Saint Matthew’s, which was added to the National Register of Historic Places in 2001, will hold its last service on May 22 at 3 p.m. Officials from the Episcopal Diocese of Long Island, which owns the church at 85-45 96th St., said they decided to shutter it because of a dwindling number of parishioners.

“The church has always been a staple in the community,” said Community Board 9 District Manager Mary Ann Carey. “The cemetery has to remain there. They shouldn’t be selling it.”

Carey and Maria Thomson, president of the Greater Woodhaven Development Corp., said they are concerned about what a new owner will do with the property.

“It’s so unfortunate they’ll sell the property,” Thomson said. “The church never said anything to the community about this situation.”

According to a message in the church’s May 8 service bulletin, the rector, the Rev. Tracey Williams, will continue to live on site until plans for the sale of the church are finalized. Diocese officials did not say when they expect to sell the church, nor to whom. They said the building will be deconsecrated during the last service.

“This action has been taken after many years of faithful ministry in the midst of a declining population and dwindling resources,” the Rev. Lawrence Provenzano, bishop of the Long Island diocese, wrote in a recent e-mail to supporters.

Several former parishioners said the decrease in population occurred following disputes with the church’s current rector. Williams did not respond to a request for comment.

John McGinty, the diocese’s director of communication, said it was “unclear” as to what will happen to the Wyckoff-Snediker Family Cemetery, which the church purchased from the city in the early 1960s and which was also placed on the National Register of Historic Places in 2001.

The cemetery has about 160 individual gravestones denoting burials from 1793 to 1892.

Allan Smith, 73, a Woodhaven resident who was baptized in the church, grew up going there and worked for years to restore the cemetery, said he is distraught to see the end of an establishment that has played an instrumental role in his life.

“It’s probably the finest example of English Gothic architecture on Long Island and probably on the East Coast,” said Smith, a former architect who has conducted tireless research on the cemetery and the church but is no longer a member. “It has a bell tower and beautiful stained glass. It really is very special.”

Saint Matthew’s held its first service on Jan. 7, 1900 at a storefront rented on Jamaica Avenue near 91st Street.

It moved from that spot to a a small wooden church on 96th Street in 1901, and the cornerstone for the building that houses the congregation today was laid in 1927.The first service in the stone church was held on Dec 2, 1928.

“It is a sad day for such a beautiful church to close,” state Assemblyman Mike Miller (D-Woodhaven) said. “The many programs St. Matthew’s provided, like its food pantry, served the community for years and its loss will be felt by everyone. St. Matthew’s is a fixture in the Woodhaven community, and it will be impossible to replace.”