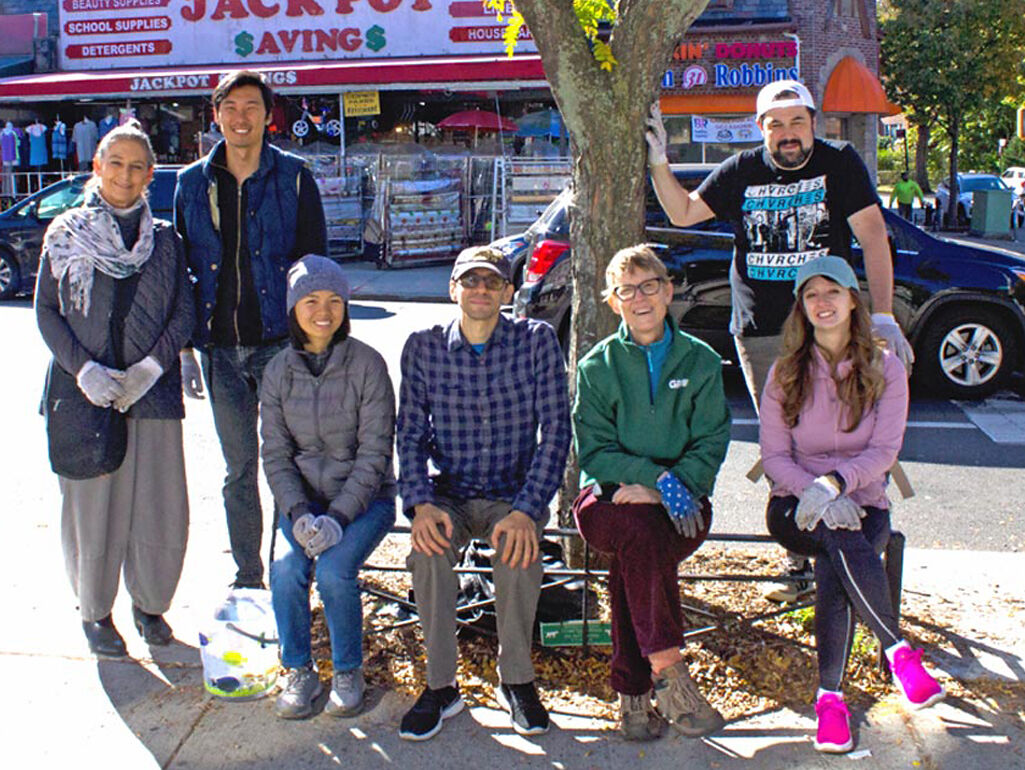 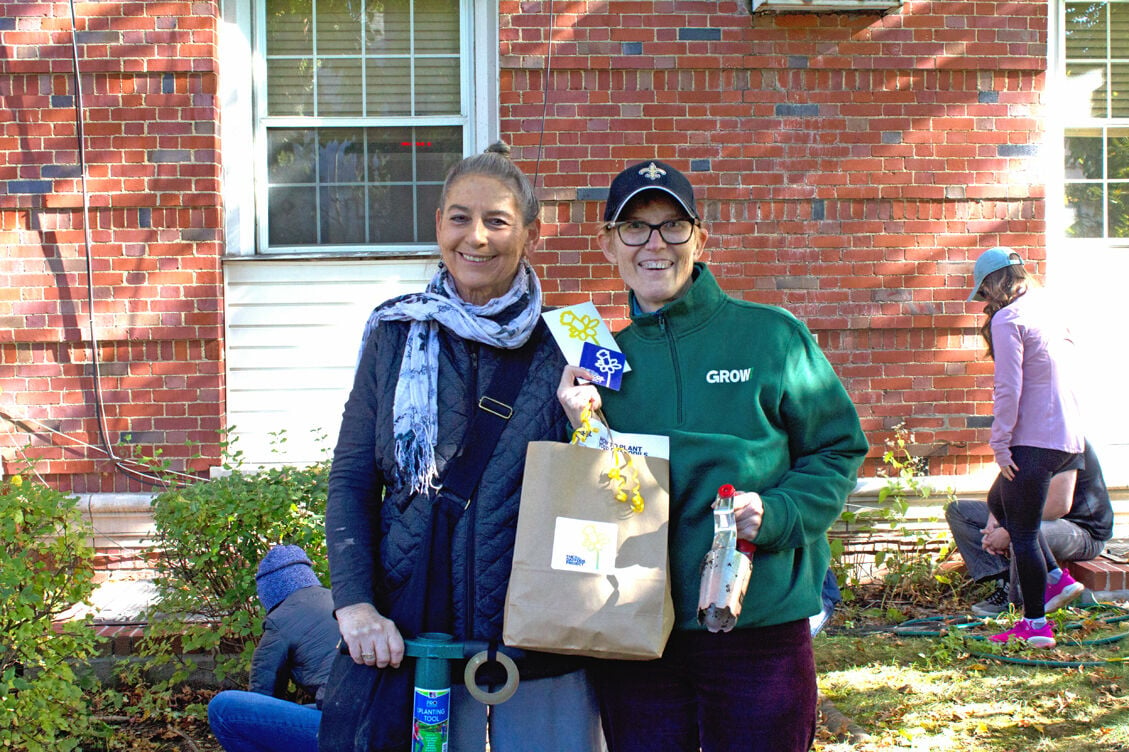 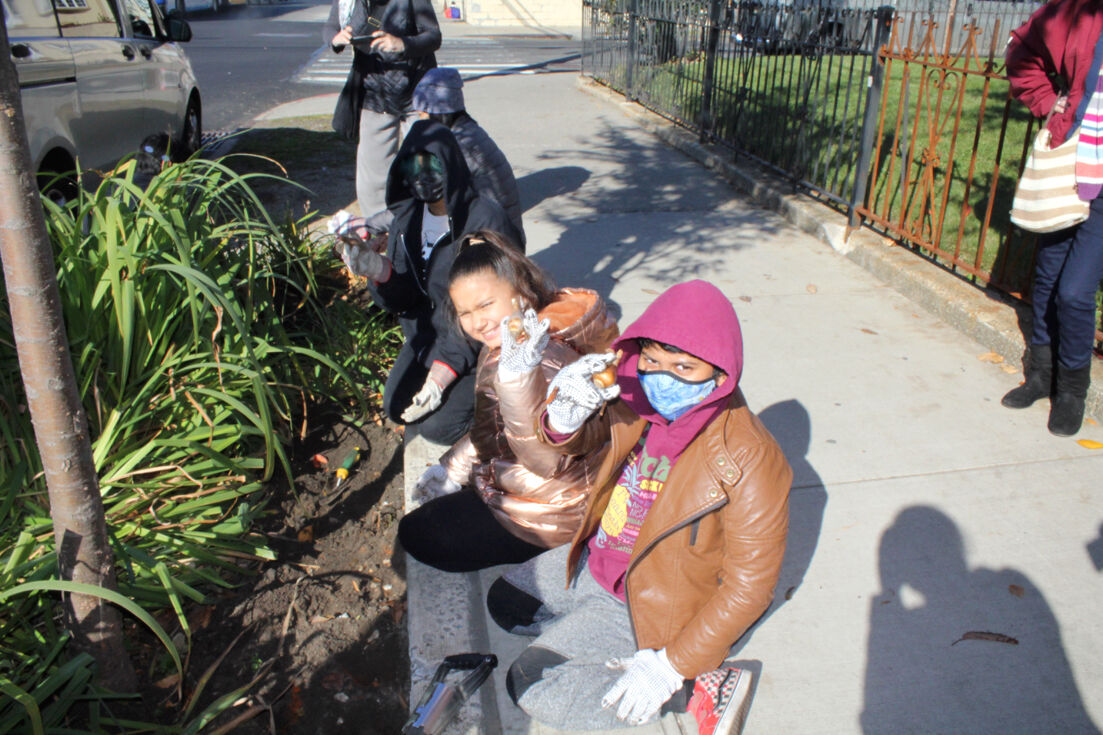 Avangeline Bacchus, Olivia David and Sydney Bacchus help them out. 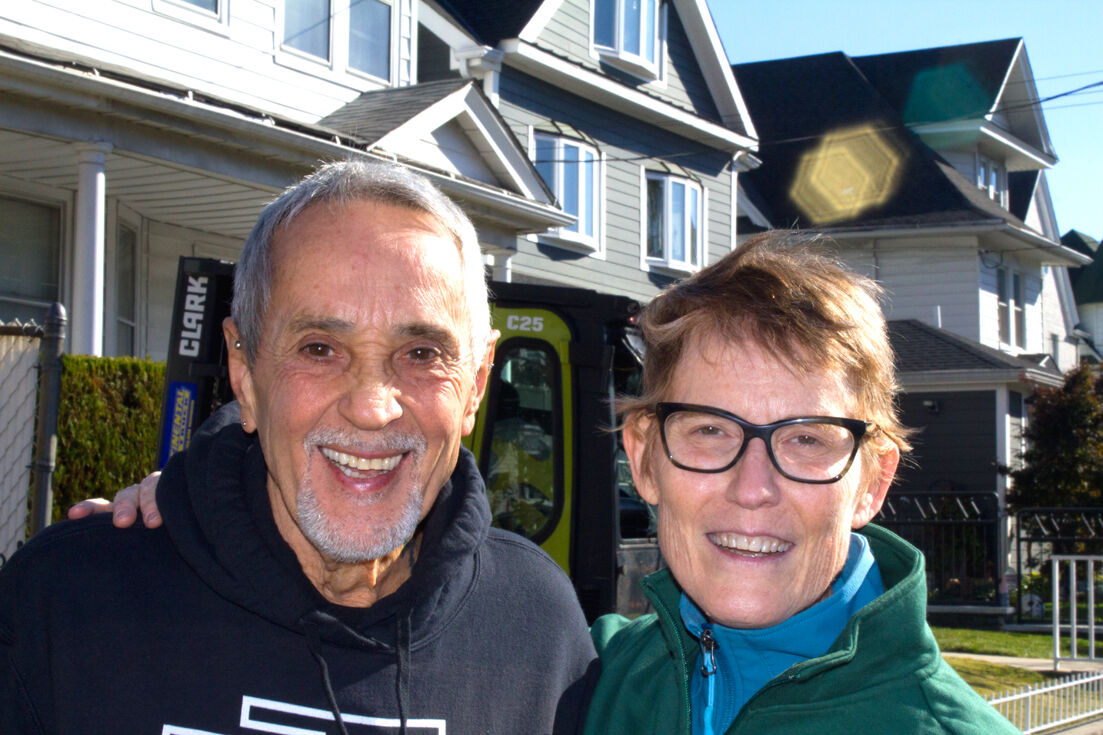 At top, Swami Durga Das, founder of The River Fund, thanks Anne Craig for beautifying the charity’s neighborhood. 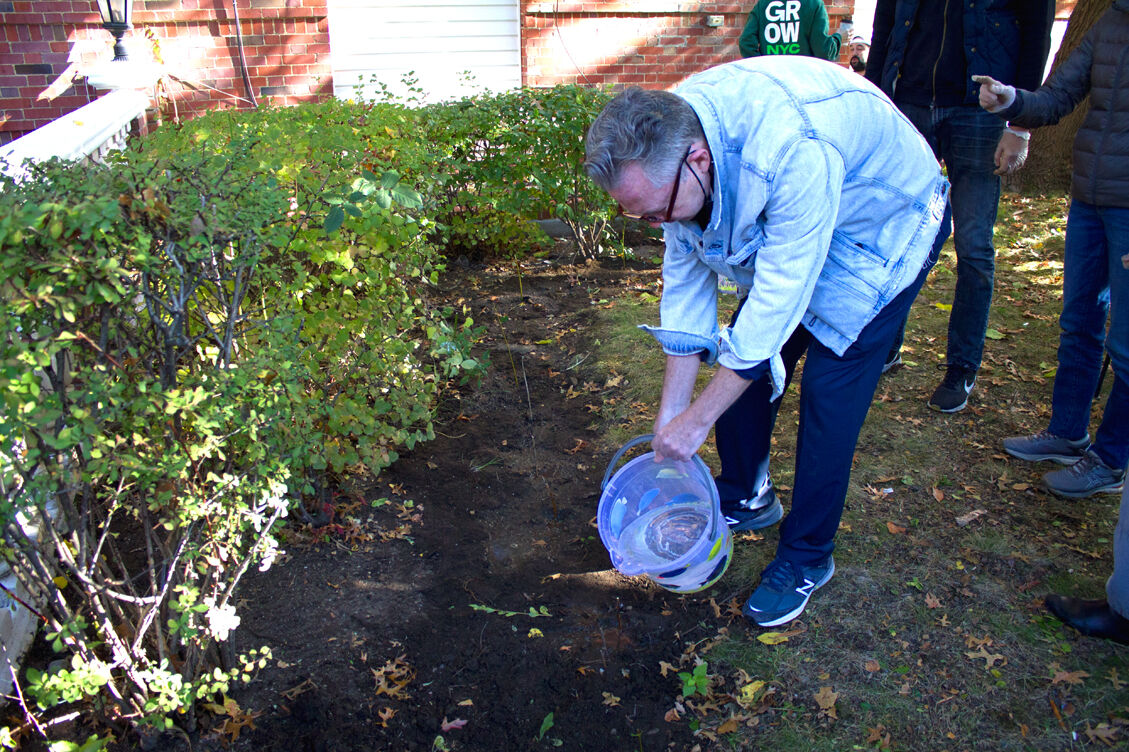 Avangeline Bacchus, Olivia David and Sydney Bacchus help them out.

At top, Swami Durga Das, founder of The River Fund, thanks Anne Craig for beautifying the charity’s neighborhood.

Off the kitchen table and into the garden, a Parmesan cheese shaker leads a new life as a vessel for red clover seeds. A small group of children excitedly jiggle the jars as the seeds fall and permeate the soil in a local tree well that not too long ago was covered in clutter and trash. Soon enough, the little multicolored orbs will grow into a sea of miraculous pink flowers.

The transformation of the tree well on Metropolitan Avenue between 116th and 118th streets and many other spots like it is entirely owed to Kew Gardens residents Anne Craig and Carol Lacks, and the support of the Kew Gardens Council for Recreation and the Arts.

Craig and Lacks hope to inspire their Queens community to get involved in gardening. Planting red clover is just one of the many beautification projects the pair is working on.

With big hopes, Craig said, they received 600 daffodil bulbs from New Yorkers for Parks' The Daffodil Project, a program that provides these flowers to volunteers in honor of the victims of 9/11. On Nov. 6 the pair, along with a few volunteers, planted many of them near The River Fund, a food bank in Richmond Hill, which, just like the other tree well, was sprinkled with litter.

“They’ve done an amazing amount of work cleaning up trash off of the streets,” Craig said of The River Fund. “Come next spring I want to start turning that into an area that’s not just cleaned of trash, but that’s beautiful. It’s hard enough to have to go to stand in line for food, but you know, it might as well be beautiful.”

Swami Durga Das, founder and CEO of The River Fund, was excited to have the volunteers there, calling the project “a reward for our neighborhood and site.”

The morning of the beautification of the River Fund, Craig met up with the volunteers at a Kew Gardens senior center, the New Homestead Home for Adults, where they planted a few bulbs. Next, they headed to the tree wells on Metropolitan Avenue and continued to pick up litter and plant the bulbs. Many of the volunteers were passionate about beautifying the community.

“It’s important to get involved in your community to make a difference and to make sure your neighborhood is clean,” he said.

Clearly, Craig and Lacks aren’t alone in wanting to beautify the community and bring neighbors together in the process. Since the early days of the pandemic, gardening has exponentially increased in popularity, and it shows no sign of slowing down anytime soon, according to an article published by the University of Florida. There are quite a few residents who have expressed interest on social media in starting a community garden, specifically in Ozone Park, where there’s never been one.

Although community gardens present some obvious neighborhood benefits, they also come with their own challenges to get them literally off the ground. Melissa Checker, author of “The Sustainability Myth” and a professor at Queens College, said the first obstacle is obtaining a plot for a garden. Additionally, the city mandates insurance coverage, which must be paid for by a volunteer who is in charge of the garden.

Despite these difficulties, gardens are still wanted by so many in these communities and there are ways to work around the financial burden that one might bring. The Whole Kids Foundation provides grants to those who create a garden in tandem with a local K-12 school or nonprofit that works with children. Other assistance for these kinds of projects might come from GrowNYC, which has built more than 130 gardens in the city.

Even so, none of their gardens reside in Kew Gardens, and for those who want to partake in community planting, they must travel outside of their own neighborhoods to the Rockaways or Woodside, where community gardens are thriving.

Nabilah Islam, a long-time Ozone Park resident and program associate with Land, Water and Climate Justice at American Jewish World Service, said many residents enjoy gardening, particularly immigrants from Bangladesh. She said that she believes gardening is an amazing way to build a sense of community in the neighborhood, while preserving cultural heritage.

Staples in Bangladeshi cuisine, such as squash and cilantro, are grown from seeds and then used in cooking, whether by the gardener who planted them, or by a neighbor who is given the vegetable or spice.

“In Bangladesh most people do have their own farms and home-grown vegetables and stuff,” Islam said. “It’s just like what they would do in their normal everyday lives, back in their country. That really makes them feel like they’re still connected in a way ’cause it’s their hobby and they’re so used to being able to be themselves that way.”

Although many residents currently grow produce in their yards, that isn’t possible for everyone. The housing market is changing in Ozone Park, Islam said, and single-family homes are becoming multifamily homes. She said that more apartments are being built and fewer people will have backyards. According to reports from the city the number of multi-family homes in Queens has increased by more than three thousand since 2017.

With the change comes the need for a community garden, and Ozone Park resident Carolyn LaVeglia said she intends to spearhead the campaign.

While taking an afternoon stroll with her husband last February, LaVeglia came across a lot of land which was entirely empty, other than a few tires and trash scattered about. Near a baseball field, and a park, this plot had the potential to transform from dirt and scrapes, plastic cups, and old crumpled receipts to a community garden where residents could plant food and flowers, said LaVeglia.

This idea blossomed into something more after she created a poll in a local Facebook group, asking her neighbors whether they’d like to have a community garden in the area. Ninety one percent of the 84 survey participants agreed that they would.

By early March, LaVeglia pitched the idea at a community board meeting, but says the idea was not met fondly by officials, who brushed her off and said they were working on a different beautification project. This did not satisfy LaVeglia. She is in the process of creating a formal proposal and gathering signatures of residents who are interested in the project. She said she is determined to transform the poorly maintained lot into an enriching space for her neighbors.

“It could be a great source of green space for the community, planting trees and planting flowers and all those kind of things,” said LaVeglia. “But you know in our mind, being able to produce food for the community in this neighborhood is really important to us.”

This article was amended to say that The Daffodil Project is a program of New Yorkers for Parks.