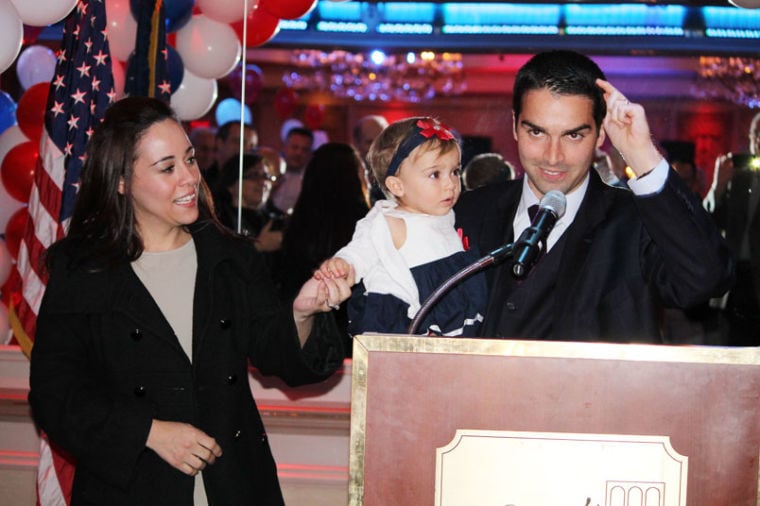 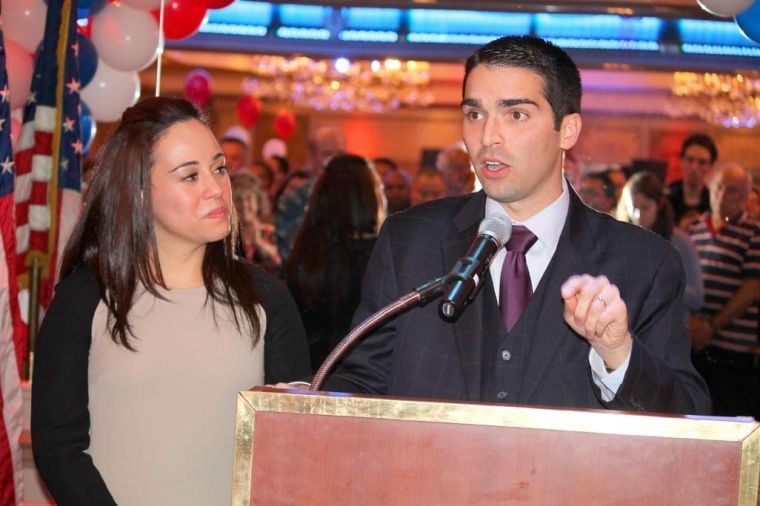 A Democratic surge swept across the city Tuesday night, but it did not appear to take down Queens’ lone Republican officeholder.

Councilman Eric Ulrich (R-Ozone Park) appeared to prevail over his Democratic rival, District Leader Lew Simon 53 percent to 47 percent in the 32nd Council District — a margin of about 1,100 votes — in what ended up being the closest race in the entire city.

Both Ulrich and Simon declared victory Tuesday night, each assuring supporters that ballots still to be counted would go in their candidate’s favor.

At Russo’s On The Bay in Howard Beach, Ulrich supporters filed in slowly after 9 p.m. They had little reaction to the expected victory of Mayor-Elect Bill de Blasio and other Democrats on the ticket as the night wore on, but kept eyes glued to the televisions screens in the catering hall for news on the Council race.

Simon lead for a good portion of the night — and often by large margins — and was ahead right up until Ulrich declared victory at around 11 p.m. The Democratic challenger was able to run up his numbers in Woodhaven and Richmond Hill — areas moved into the district during redistricting last year and where de Blasio trounced his Republican opponent, Joe Lhota — and held his own in his native Rockaway. Though totals still had him down, Ulrich campaign staffers assured supporters that Howard Beach had not yet been counted and would give the incumbent the lead. In Lindenwood, Ulrich prevailed even as de Blasio won the neighborhood by a wide margin.

“I am happy to announce we won,” Ulrich said as he took the podium with his wife Yadira and year-old daughter Lily. “We kicked Lew Simon’s ass, now let’s have a drink.”

Ulrich said he would move forward to work with the mayor-elect, but praised the previous two chief executives for their work over the years.

“I have a lot of work to do, helping people recover from Hurricane Sandy, working with the new administration to create jobs in the city and continue some of the good things Mayors Giuliani and Bloomberg have done and implemented over the past twenty years,” he said. “I will work with Bill de Blasio. I will work with Melinda Katz. I know them both personally. I consider them friends and I will work with them in a bipartisan way to help my constituents.”

Ulrich will be one of only three Republicans on the City Council and the only one outside of Staten Island, where newcomer Steve Matteo was elected to the seat left open by Staten Island Borough President-Elect James Oddo and Councilman Vincent Ignizio, who was re-elected to his seat on the island’s South Shore. When asked about entering the new Council as the senior Republican, Ulrich dismissed talk of running for minority leader in the new Council.

“I think I could play a much different role in the Council and I want to see who the next Speaker will be,” he said.

Ulrich said he wasn’t too surprised by the close margin, noting that the Republican Party has taken a hit in New York City. He blamed national Republicans for the issues his party has locally and noted the ongoing civil war in the Queens GOP between the party’s official leadership, and a faction Ulrich is part of, isn’t helping the situation.

“The Republican brand is at an all-time low and people have lost confidence and respect for the Republican Party,” he said. “That’s mainly because of these Tea Party extremists who have taken my party off a cliff and also because of the corrupt elements of the party locally that have yet to be purged.”

Simon did not concede in a statement released Wednesday.

“We defied expectations,” he said. “The race isn’t over.”

Simon supporters at his victory party at the Irish Circle pub in Rockaway Park were declaring him the winner, but a Democratic source said Simon had not taken the Howard Beach numbers into consideration when he declared victory.

“We thought we had it,” the source said. “But the numbers [in Howard Beach] were terrible for us.”

The 32nd District — which is one of the few in the city that remain competitive for both parties — covers Woodhaven, Richmond Hill, Ozone Park, Lindenwood, Howard Beach, Broad Channel and the western Rockaway Peninsula including Belle Harbor and Breezy Point.