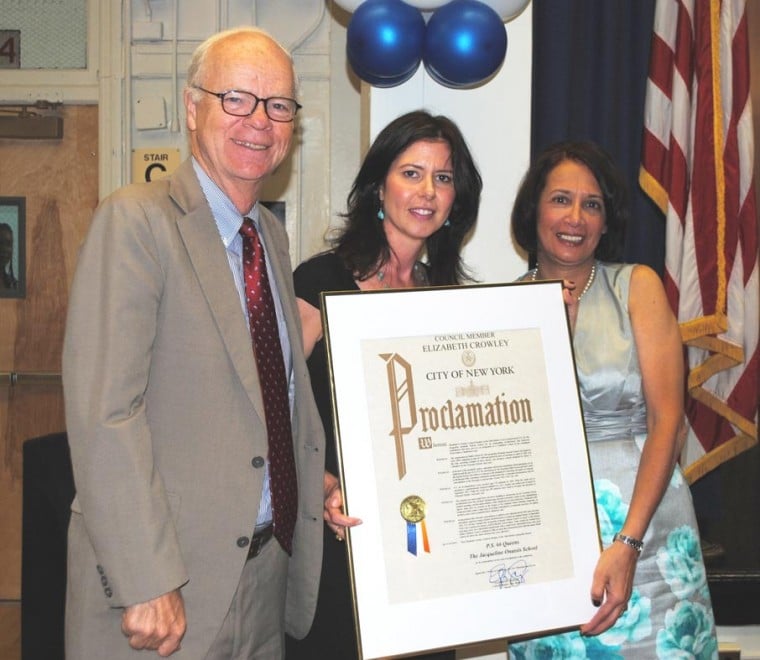 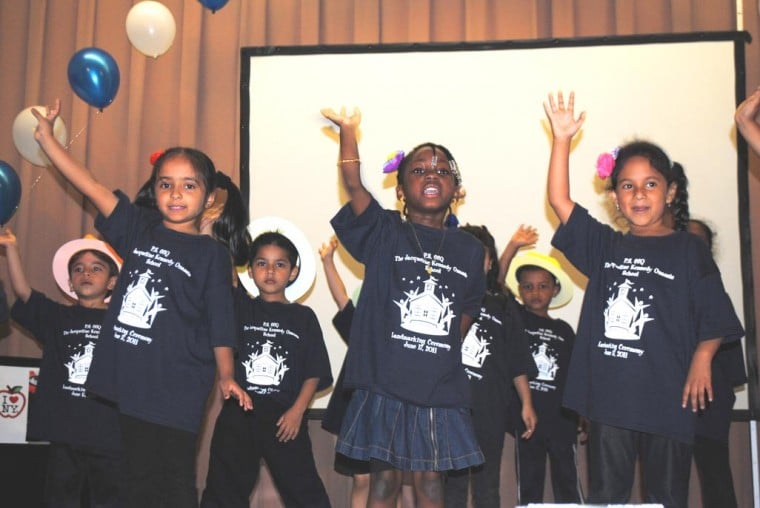 Students perform a song and dance piece during the landmarking celebration. There were a number of pieces performed which revolved around the theme of loving the city.

Students perform a song and dance piece during the landmarking celebration. There were a number of pieces performed which revolved around the theme of loving the city.

When PS 66 opened its doors in Richmond Hill at the turn of the 20th century, the students — most of them the sons and daughters of German, Italian and Irish immigrants —knew the imposing building as a huge brick castle with a bell tower that would toll to call the pupils from their farms to class.

It was in that building, which was named the Jacqueline Kennedy Onassis School in 2001, that students have been a witness to history, discussing the 1929 stock market crash in class and living through the subsequent Great Depression, celebrating the end of World War II in the school yard and watching the inauguration of President John F. Kennedy and the resignation of President Richard Nixon on a television screen in the auditorium.

The rich history of PS 66 was celebrated Friday, when school and city officials, legislators, students and civic leaders gathered to celebrate it receiving a city landmark status, which protects the the building from being torn down and severely limits what can be changed to the structure.

PS 66 is the first school in Queens to be granted landmark status.

“PS 66 was one of three schools built in the 1890s, and it’s the only one to survive being torn down,” Principal Phyllis Leinwand said during the Friday morning ceremony that was dedicated to Nancy Cataldi, the former president of the Richmond Hill Historical Society who spearheaded efforts to landmark the school and died in 2008.

The school was built in 1898, at a time when the city education system was undergoing a massive transformation because federal law had recently mandated all children be educated.

It is built in the Romanesque Revival style of architecture, making it appear as though it should appear in the pages of a storybook with its high, paned windows and the bell tower that once tolled to call students on neighboring farms to class.

“New York City landmark status is not only an honor, but it provides significant protection with what can be changed here,” said Robert Tierney, chairman of the city Landmarks Preservation Commission. “It’s a great assurance for the future generation.”

After it was built in 1898, it remained vacant until 1901, which landed the city some negative press in Brooklyn Daily Eagle article from May 18, 1900.

“While in Brooklyn and Manhattan there are thousands of children who cannot go to school because there is no room for them, in Union Course there is room for nearly 2,000 which the population of the village has not yet been blessed,” the article said in reference to PS 66, originally named the Brooklyn Hills schools, and another nearby school.

School officials played a number of videos they made for the ceremony, including one in which students read letters from former students.

Many members of the school’s community, including former students, principals and teachers, attended the ceremony, and Councilwoman Elizabeth Crowley (D-Middle Village) presented the school with a proclamation from the Council.

“To me, it was more than a school, it was a family,” said Ethel Duyrea, a Woodhaven resident who graduated from the school in 1928. “It was here I learned to love education and the joy of music and reading.”

Duyrea said one of her fondest memories of PS 66 was when the sixth-grade students would dance around the maypole during the school’s annual June festival.

Daniela Caba, a fifth-grade student, said she feels especially honored to attend a school so steeped in history.

“The landmarking of PS 66 is an important step in protecting the rich history of Richmond Hill,” Caba said.

Caroline Kennedy sent a letter that was read during the ceremony, praising the school named in honor of her mother, who championed preserving architecture in the city, especially Grand Central Station.

“She’d be so pleased a new generation of New Yorkers is living and thriving” in a landmarked building, the letter stated.

Carl Ballenas, a Richmond Hill historian, also noted how important the landmarking would have been to Cataldi.

Ballenas noted that the owner of the company, Underhill, that made the bricks for the school stamped them with the letters “IXL,” — in other words, “I excel.”

“How appropriate that is for this wonderful school,” Ballenas said.