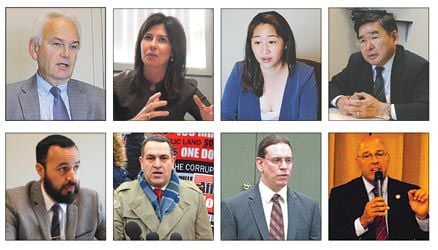 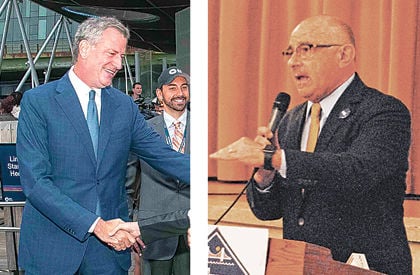 Mayor de Blasio, left, and one of his primary opponents, Sal Albanese. 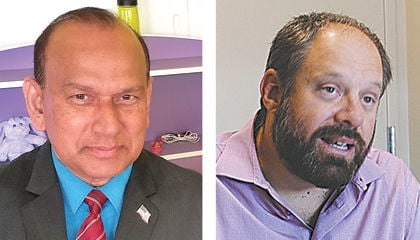 Mayor de Blasio, left, and one of his primary opponents, Sal Albanese.

In Middle Village, a longtime civic leader seeks to put his money where his mouth is by unseating the incumbent he’s publicly criticized for years. An assemblyman’s wife in Flushing looks to become his colleague in government by becoming the area’s councilwoman. And in Corona, the Democratic establishment seeks to stop a candidate from regaining his seat.

These are just some of the storylines playing out as Democratic voters get ready to head to the polls Tuesday, to cast their ballots in citywide and Council races.

Here are the basics you need to know before heading to the polls next week. The end of the story contains information for anyone with questions on when and where to vote.

For almost as long as Councilwoman Elizabeth Crowley (D-Glendale) has been in office, Juniper Park Civic Association President Bob Holden has been there criticizing her. Now, he’s looking to convince the voters it’s time for a change of pace. As anticipated by some, the race has become personal and ugly at times. Holden last week said a Crowley campaign mailer led to a bomb threat being made at his house. Even if the incumbent wins on Tuesday, she’s not rid of Holden just yet — he’s also running on the Reform and Conservative lines in November.

The 30th Council District includes parts of Woodhaven and Ridgewood and all of Middle Village, Maspeth and Glendale.

Hiram Monserrate last held public office on Feb. 9, 2010 — the then-state senator, and former councilman, was stripped of his title after he assaulted his girlfriend in their apartment lobby and in 2012 he pleaded guilty to fraud and spent two years in prison.

Now, he believes he’s owed a second chance and is looking to win the seat he previously held. Monserrate started campaigning before Councilwoman Julissa Ferreras-Copeland (D-East Elmhurst) in June announced she would not seek another term in the Council, citing personal reasons.

After her announcement, Assemblyman Francisco Moya (D-Jackson Heights) threw his hat into the ring.

Although the assemblyman enjoys the support of Mayor de Blasio and the Queens Democratic Party, Monserrate does have a base — he’s popular among LeFrak City residents, where he’s been leading a protest against the moving of the complex’s polling site; the residents are now suing the Board of Elections over the move — and is hoping to pull off the upset.

Whoever wins the race will essentially be crowned councilman-elect — no Republican is running in November.

The 21st Council District includes all of East Elmhurst, LeFrak City and Corona and parts of Elmhurst and Jackson Heights.

Koo believes his “district-oriented” approach to government has made Flushing a better place since he took office in 2010. He’s now looking to get the city to invest in the district’s infrastructure.

The two in recent weeks have traded barbs over campaign contributions, their views on development, cigarettes and Koo’s second home in Port Washington, LI, which Tan says the incumbent actually lives in, something he denies.

There is no Republican challenger running in the general election.

The race to replace Wills

For years, the ongoing corruption trial of former Councilman Ruben Wills has hung like a cloud over 28th Council District. That cloud was lifted when he was kicked off the Council following his conviction in August.

Richard David, a native of Guyana, has been campaigning since last year and has the support of Councilman Eric Ulrich (R-Ozone Park), who represents one of the neighboring districts. David says he’s the only one who has lived on both sides of the Van Wyck Expressway, which splits the district, and is the only one with a plan for both halves.

Rochdale Village attorney Hettie Powell touts that she’s been using her legal background to help people for 35 years — longer than David’s been alive — and says she’s the best candidate to deliver constituent services, something the area has been “craving” for, she says.

But the Queens Democratic Party pick Adrienne Adams, chairwoman of Community Board 12, says her experience on the advisory panel, working with city officials and agencies, makes her the most qualified.

Other candidates announced their intentions to run but did not make it onto the ballot.

The winner of the three-way race will face Republican Ivan Mossop on Nov. 7. The victor of that race will be sworn in upon certification of the results to serve the remainder of Wills’ term before starting the full one in January.

The 28th Council District includes parts of Richmond Hill and South Ozone Park and all of South Jamaica and Rochdale Village.

Urban planner Paul Graziano is to Councilman Paul Vallone (D-Bayside) what Holden is to Crowley. The civic activist has lambasted much of what the incumbent has done during his time in office. He wants to stop the “jarring changes” he’s seen in the district and use his background to do so.

Vallone on his campaign website touts the $40 million in funding he’s brought back to the district to pay for vital resources such as libraries, parks and schools.

The BOE states Floral Park resident Benny Itteera is challenging Councilman Barry Grodenchik (D-Oakland Gardens) on Tuesday, but no information for the candidate can be found online. Grodenchik is looking to win his first full term in the Council. He replaced former Councilman Mark Weprin in 2015.

Lancman denies that charge, saying he’s provided tens of thousands of dollars to such groups since taking office in 2014.

Anthony Rivers, a former U.S. Marine and retired police officer, is looking to unseat Councilman Daneek Miller (D-St. Albans) and promises to address inequity in the district and issues such as the many homeless shelters in the area, according to his campaign website.

The incumbent took office in 2014.

The 27th Council District includes parts of Jamaica and Queens Village and all of Cambria Heights, St. Albans and Springfield Gardens.

Scala vs. Sheikh vs. Ruiz

Three Democrats are looking on Tuesday for the chance to defeat the borough’s lone Republican, Councilman Eric Ulrich (R-Ozone Park).

Mike Scala is a Howard Beach attorney who’s made a name for himself as a transportation activist.

He wants a chance to prove he’s not a one-issue candidate.

Helal Sheikh is an Ozone Park doctor whose website states is focused on preserving affordable housing and assisting homeowners on ways to stay in their houses.

William Ruiz works at a nonprofit that seeks to provide people with permanent housing and wants to use that experience to help the district.

In the district that has the smallest sliver of Queens, Brooklyn Democratic district leader Tommy Torres is challenging Councilman Antonio Reynoso (D-Brooklyn, Queens). The district includes a part of Ridgewood.

Queens Borough President Melinda Katz is being challenged by perennial candidate Everly Brown, who has run for office multiple times including in the 2013 Democratic primary that Katz won.

He came in third in that race.

Mayor de Blasio is being challenged by former Councilman Sal Albanese, Richard Bashner, Michael Tolkin and Robert Gangi, according to the BOE.

Albanese is considered his most serious threat, though the incumbent is expected to win handily, according to several polls.

The winner will face Republican Assemblywoman Nicole Malliotakis (R-Staten Island, Brooklyn), who has no primary opponent, in the general election.

Former police detective and TV personality Bo Dietl will also be running in November as an independent after he bungled paperwork trying to switch from Republican to Democrat and was left off both party lines.

How and when to vote

All of the races next week are for Democratic nominations, so only registered members of that party can vote.