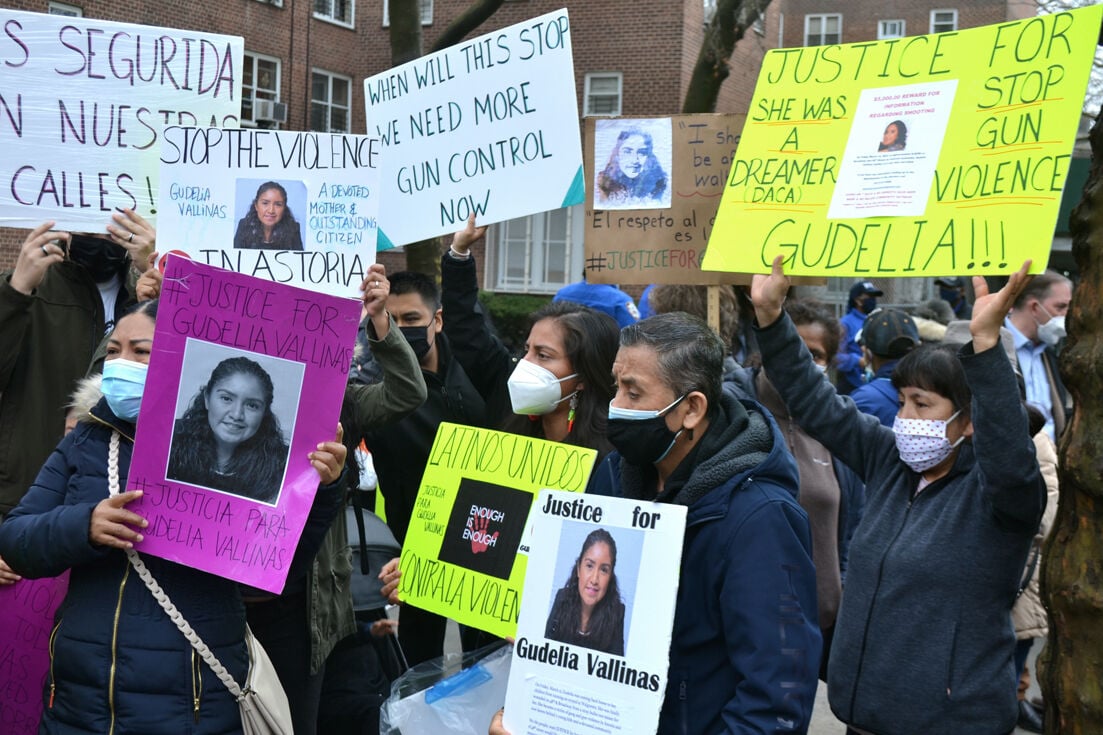 The stray-bullet slaying of Gudelia Vallinas March 12 near the Astoria-Woodside border was lamented at a protest against gun violence held last week. The victim’s widowed husband was among those who pleaded for an end to the spate of shootings in the area. 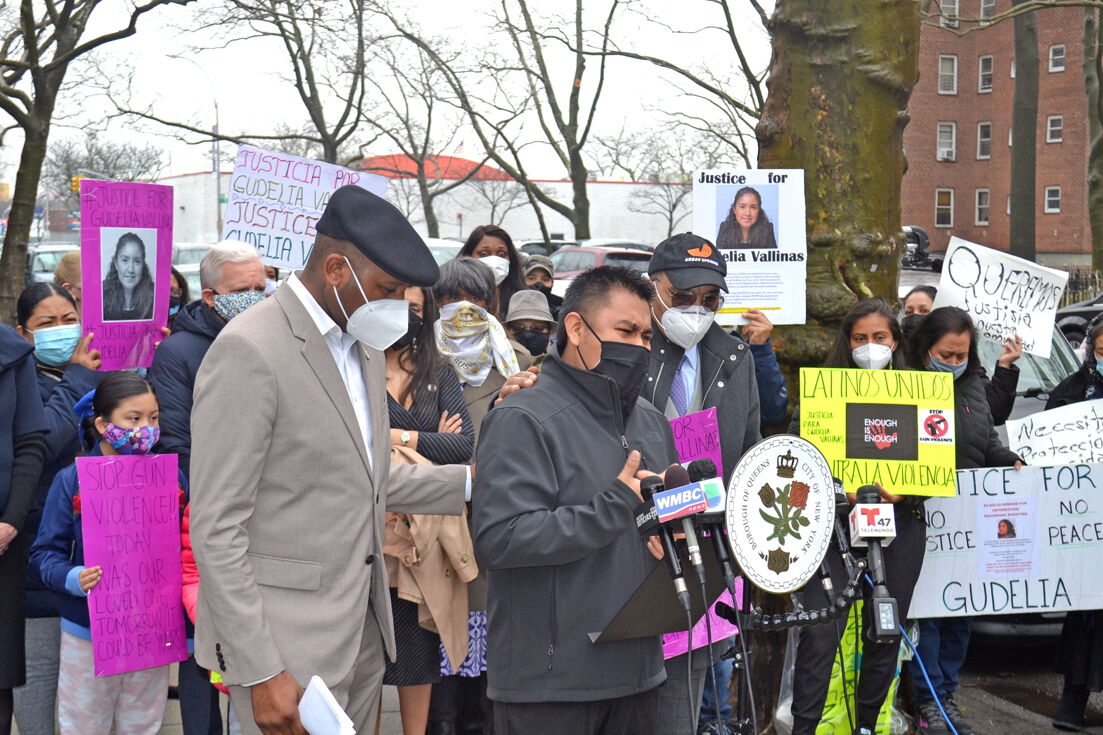 Alfredo Vallinas is comforted during a rally Thursday by Borough President Donovan Richards and Bishop Mitchell Taylor as he remembers his wife, Gudelia, who was shot to death in Woodside on March 12.

The stray-bullet slaying of Gudelia Vallinas March 12 near the Astoria-Woodside border was lamented at a protest against gun violence held last week. The victim’s widowed husband was among those who pleaded for an end to the spate of shootings in the area.

Alfredo Vallinas is comforted during a rally Thursday by Borough President Donovan Richards and Bishop Mitchell Taylor as he remembers his wife, Gudelia, who was shot to death in Woodside on March 12.

The Woodside community gathered last Thursday in the wake of fatal shootings in the area.

“They did not only kill a wife and a mother, a friend, they also killed me, too, because now when I walk the streets I know I’m never going to see her again and the pain will never go away,” said Alfredo Vallinas, whose 37-year-old wife, Gudelia, was killed by a stray bullet during a March 12 gang shootout.

The two started dating at 15 and married at 23. The couple, who have two children, were supposed to celebrate their 15th anniversary in May.

“I just want the streets to be safe again,” Vallinas said. “We shouldn’t be living like this, shootings all the time.”

Borough President Donovan Richards, speaking outside the Woodside Houses Management Office at 50-51 Broadway, said he wants to see the criminals turned in.

“We call for the community to turn them in because you know who they are,” he said. “We have to turn them in. We’re not asking for vengeance but when you do the crime you gotta do the time and her family deserves justice.”

Elliot Claiborne, 29, was killed after being shot in the lower back, legs and arms outside the Woodside Houses March 23.

The night before the press conference, a 32-year-old man was shot in the back at the complex. He is expected to survive.

“Parents, take control of your household where some of these children and young men are living,” said Annie CottonMorris, who heads the tenant association at the Woodside Houses.

Similar to CottonMorris, Coger said if parents in broken homes don’t train their children, “then they’ll go into the streets and do whatever and that’s what’s happening here.”

Around 30 people were part of the rally, with some holding signs saying “Justice For Gudelia Vallinas,” “Stop the Violence” and “I Should Not Be Afraid To Walk Outside.”

Some speakers spoke of the city’s Cure Violence movement, which views gun violence as a public health issue.

State Sen. Jessica Ramos (D-East Elmhurst), who grew up in the area, said there need to be more conflict resolution skills brought into neighborhoods. “Isn’t the rat race enough? Coronavirus took a toll in our community,” she said. “Our people have to work themselves to death in order to put food on the table. We got a whole slew of problems to take care of. Put the damn guns down and let us get to work.”

City Council candidate Tiffany Cabán said one of her earliest memories came as she was sitting in a stroller as a 3-year-old and her mom had to push her behind a car when they unexpectedly found themselves in the middle of a gun fight.

“It’s an epidemic as dangerous and deadly as a pandemic,” she said of gun violence, adding, “We need to inoculate our communities against gun violence.”