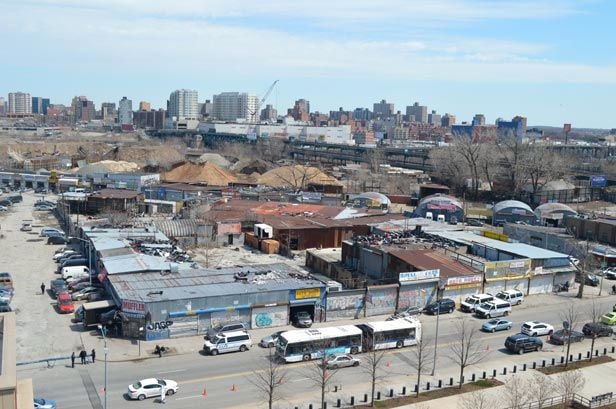 Willets Point, as seen from Citi Field in April, may stay much the same in the near future as plans to redevelop the area are on hold pending a legal appeal by the developers, who want to proceed to build a mega-mall. Even the mayor is backing away from the deal. 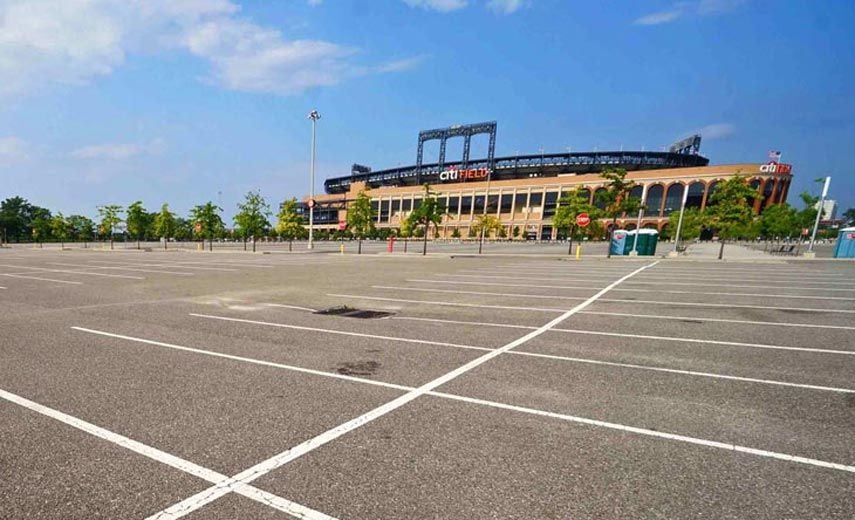 The Citi Field parking lot was the location for a proposed 1.4-million-square-foot mall that would be on city parkland. Now the city has not joined the developers in their legal appeal to proceed, which could mean the end of the project.

Willets Point, as seen from Citi Field in April, may stay much the same in the near future as plans to redevelop the area are on hold pending a legal appeal by the developers, who want to proceed to build a mega-mall. Even the mayor is backing away from the deal.

The Citi Field parking lot was the location for a proposed 1.4-million-square-foot mall that would be on city parkland. Now the city has not joined the developers in their legal appeal to proceed, which could mean the end of the project.

The decision by Mayor de Blasio not to join the legal appeal by the developers who want to erect a mall in the Citi Field parking lot could spell the beginning of the end for the shopping center and even the entire 47-acre Willets Point project.

That’s the opinion of several people familiar with the ins and outs of the star-crossed $3 billion redevelopment plan originally pushed by Mayor Bloomberg and awarded to the Queens Development Group, consisting of The Related Companies and Sterling Equities, which is headed by Fred Wilpon, owner of the Mets.

The developers want to build a 1.4-million-square-foot mall known as Willets West on the parking lot to help pay for later projects on 126th Street, across from Citi Field that called for some affordable housing.

But the developers stalled on the affordable housing and don’t expect to build it until 2025 with the option of not building it at all by paying the city $35 million to void the plan.

That apparently did not sit well with de Blasio, who is leading the affordable housing charge as key to his administration.

So last week at the 11th hour, the city pulled out of joining the developers in appealing a court ruling made last month that they can’t build the mall because it is on city parkland.

It is believed that weakens the developers’ case even more. According to published reports, Alicia Glen, deputy mayor for housing and economic development, indicated the city’s Law Department attorney doesn’t believe the developers can win.

A state Appellate Division panel ruled unanimously in July that any alienation or removal of parkland must be authorized by the Legislature, as per state law. The developers were basing their case on a 1961 administrative code that allowed Shea Stadium to be built in Flushing Meadows Park.

The judges said that permission for a shopping mall, unrelated to the stadium, is illegal unless authorized by the Legislature.

The lawsuit challenged the city’s sweetheart deal that gave away 47 acres to the developers with an estimated worth of $1 billion for $1 to build the mall.

The fact that the judicial ruling was unanimous is seen as making an appeal unlikely to succeed. Paul Graziano, an urban planner from Flushing and one of the plaintiffs in the case, said it is very difficult to overturn; “it’s pretty ironclad.”

Now, with the mayor’s pullout, Graziano said he couldn’t be happier. “I think the mall is a dead deal,” he said. “Stealing parkland is not good and the city admitted they will lose the appeal.”

He predicts a long process, with the court not likely to make a decision for a year, if, in fact it decides to hear the case at all.

State Sen. Tony Avella (D-Bayside), who filed the lawsuit with several groups including Willets Point United, said he was satisfied the mayor has withdrawn the city’s support.

“I am pleased to hear that the city administration has decided not to appeal the Appellate Division’s unanimous and well-reasoned decision which declared that the development of Willets Point West can go no further without state legislative approval.

“Unfortunately, the developers, in filing their appeal, have refused to see the fundamental flaws in the Bloomberg plan in all its variations that would take away city parkland, displace small businesses without just compensation and fail to make substantial commitments to provide affordable and market rate housing,” Avella said. “Instead they are demanding a giveaway of millions of dollars of taxpayer money without any real public benefit being given back to this city.”

He called the developers’ appeal an “indefensible fight.”

Members of the WPU, who own businesses and land in the area and don’t want to leave, while happy at the mayor’s decision, offered words of caution and suggestions on how the city should proceed.

“We find it disturbing that the de Blasio administration is still attempting to salvage any deal with Sterling and Related for affordable housing,” members said in a statement.

The group believes the city should seek a new request for proposals that stresses the importance of affordable housing and issued a four-point manifesto:

Rescind the deal with the QDG and take back the two acres of property already sold to it; use the $99 million allocated to the QDG for cleaning up Willets Point and use it to remediate the area; complete installation of sewer lines; and sell Phase 1 property on the open market for commercial and industrial use and restore the zoning.

“It is time to recognize the past eight or so years as a very unproductive detour, a grand failed attempt to steer Willets Point away from the commercial and industrial use that it has always supported,” the group concluded.

Phil Singer, spokesman for the QDG, issued a statement that its principles are committed to the redevelopment of Willets Point and that they “and are confident that our appeal of the Appellate Court’s ruling will be successful.”

QDG’s plan called for building the mall and a parking garage while adding parking to the 126th Street side. Once completed, additional work would begin at 126th Street — which is not parkland — for a hotel, offices, restaurants and shops with housing scheduled last for 2,500 apartment units, including 875 for low- and moderate-income families.

Meanwhile, the administration has indicated that no action will be taken until the appeal is resolved, but that the city could eventually reclaim the two acres owned by the developers.