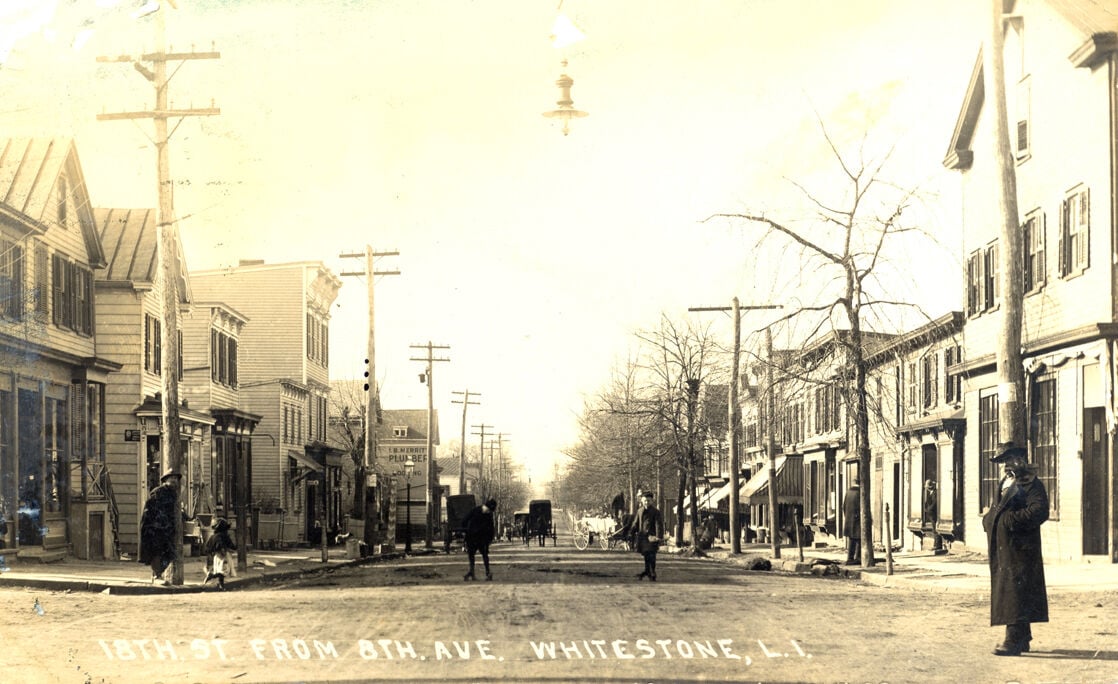 A scene from 1906 shows what is now 14th Avenue looking west from 150th Street. Today, it is a commercial corridor one block from the Cross Island Parkway. 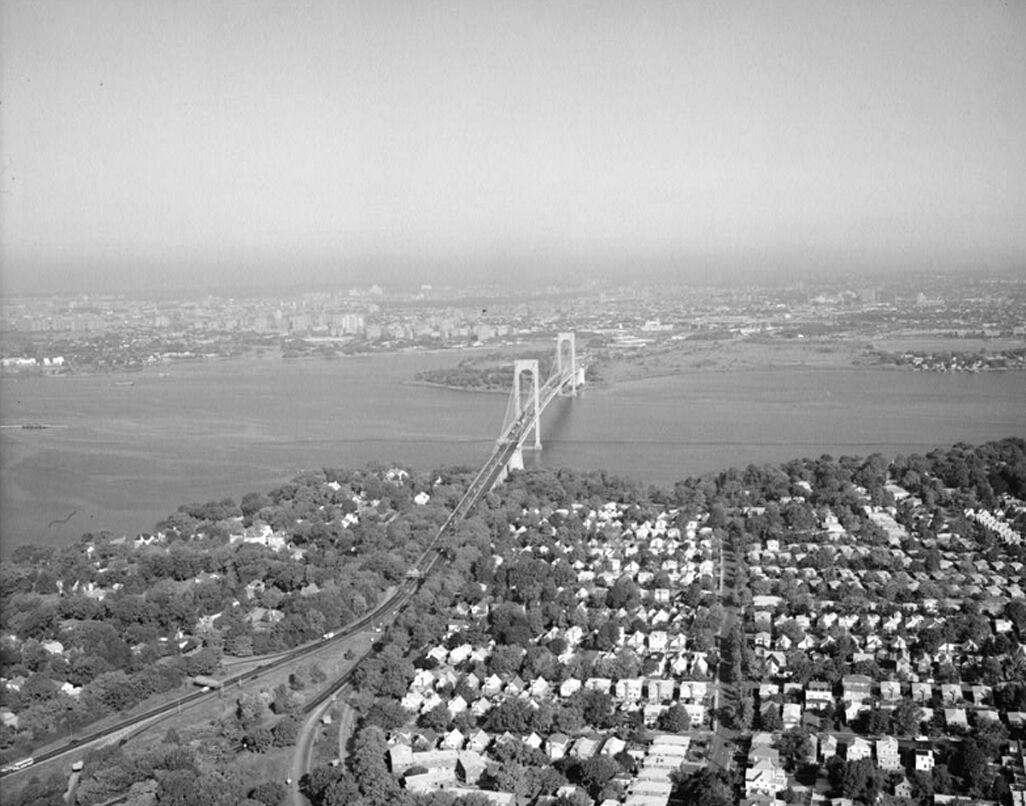 An aerial shot of the Whitestone Bridge depicts its namesake neighborhood and the East River.

A scene from 1906 shows what is now 14th Avenue looking west from 150th Street. Today, it is a commercial corridor one block from the Cross Island Parkway.

An aerial shot of the Whitestone Bridge depicts its namesake neighborhood and the East River.

Whitestone is a quiet, residental community that has been neatly sandwiched between its namesake bridge and the Throgs Neck since the latter opened in 1957, but it once was known as a bustling spot popularized by movie stars and the famous.

The list of notable people who once lived in Whitestone goes on and on. Movie stars, writers and playwrights are just a few of the opulent people who lived on the shores of the neighborhood.

The Towers at Beechhurst, located at 160-15 Powells Cove Blvd., has housed plenty of celebrities. The landmarked complex, which was converted into a co-op in 1988, according to its website, had once been the Beechhurst Towers Hotel.

Charlie Chaplin may have been the most notable celebrity to have stayed in the building during the 1920s. During that time, he was shooting silent movies at Astoria Studios on the other side of the borough. Other vaudeville and film stars, like Mary Pickford, the Marx Brothers and W.C. Fields, were also famous guests.

Walt Whitman wrote poetry on the waterfront, according to old diary entries. He is recorded as saying, “every morning I am kissed by the sun coming through my window at the bay of Whitestone.”

Arthur Hammerstein, a Broadway legend, built a Tudor-style home in Beechhurst in 1924, the year before he began building the Ed Sullivan Theatre in Manhattan.

“It was a beautiful old house,” state Sen. Toby Stavisky, a longtime Whitestoner, recalled of the home.

Stavisky and her husband, who was then the area’s assemblymember, led the efforts to landmark the “lavish” home during the late ’70s and ’80s. At the time, it was known as “Wildflower,” named after Hammerstein’s popular 1923 musical.

The Staviskys were successful in their efforts, and the home was landmarked in 1982. However, it was heavily damaged by a 1994 fire before it could be totally restored.

“There was a fire before they were able to complete it,” Stavisky said. “The owner of the building let it become a derelict, empty structure.”

The home was eventually refurbished and split into apartments. It’s one of the few estates that are still standing, she said. Many had dotted the shoreline, but were torn down and replaced for larger housing developments. Wildflower is now part of a gated condo community and surrounded by townhouses, though the refurbished version of the building does not include the popular restaurant that had been attached to the home until the 1980s, Ripples on the Water.

“Often when we were campaigning and I was tired, we would stop at Ripples for dinner,” Stavisky recalled nostalgically. It had been one of her favorite places to frequent during her four decades living in Whitestone.

Stavisky and her husband were one of the first tenants of Cryder House, located just down the block from the Wildflower estate. The couple moved into the top floor of the complex in 1964 and snagged the last one-bedroom apartment left for rent. The building would not be converted into a co-op until the ’80s, she said, when the whole neighborhood experienced a large conversion to that type of housing.

By the mid-20th century, Whitestone had largely become a residential community and the stars no longer turned to it as a vacation destination. That can be attributed to the major transportation switch in the 1930s, according to Tim Keogh, an assistant history professor at Queensborough Community College.

“In 1932, the Whitestone [Long Island Rail Road] station shut down, and in 1939 the Whitestone Bridge is completed,” Keogh said. “The expressway that’s connected to it cut up parts of Whitestone to the grid it is today.”

The rail line had provided a direct line to Manhattan that was now cut off, Keogh explained. The change reduced Whitestone’s appeal to the upper middle class as a destination away from the city. Some of the rich stayed, as well as their country clubs and some estates, but middle class and working class were ushered in.

The lack of mass transportation, but access to vehicular routes, led to Whitestone transforming into a family-oriented town. Residents needed cars to get around, and the suburban atmosphere became a perfect place to raise a family, Keogh said.

“Being outside of public transit doesn’t bring the eye of developers,” he continued, adding that Whitestone eventually become popular for people looking for a “quieter element.”

Kim Cody, the president of the Whitestone Taxpayers Civic Association, moved to the neighborhood in 1955 with his family when he was just 3 years old. He came from Manhattan, found the suburban sprawl of Whitestone perfect for his childhood, and decided to raise his family there as well. His wife, Marlene, shared the same sentiment, and the two live in her childhood home on Third Avenue.

“It was a fabulous place to grow up,” Cody said. “The community is sitll a fabulously great community and it was a great place to raise my sons.”

Whitestone has certainty changed since his adolescence, he said, to become a more congested community. He recalled spending his younger days running through backyards to get to friends’ houses, because there weren’t any fences and Whitestone felt like a hamlet.

Today, Whitestone could be considered an “outlet,” Cody said. There are more homes than there were decades ago, and more people want to move into the neighborhood.

Alfredo Centola, the president of the We Love Whitestone Civic Association, said the increased congestion is a side effect of the community being so wonderful.

“The beauty of Whitestone is the fact you have a suburban feel in an urban environment,” said he said.

The issue of overdevelopment is a beast the neighborhood is fighting against, particularly splitting one-family homes into multiple units, Centola said.

That suburban feel extends into the way the community interacts with one another, Centola continued. The way neighbors invest in small businesses, attend community events and advocate for their neighborhood contributed to his decision to move to Whitestone in the mid-1990s and start his civic association in 2015.