A green taxi is stopped on a street in Elmhurst while woman approaches what appears to be her vehicle behind it, left. An SUV, right, barrels through the corner of Parsons Boulevard and 33rd Avenue in Flushing. 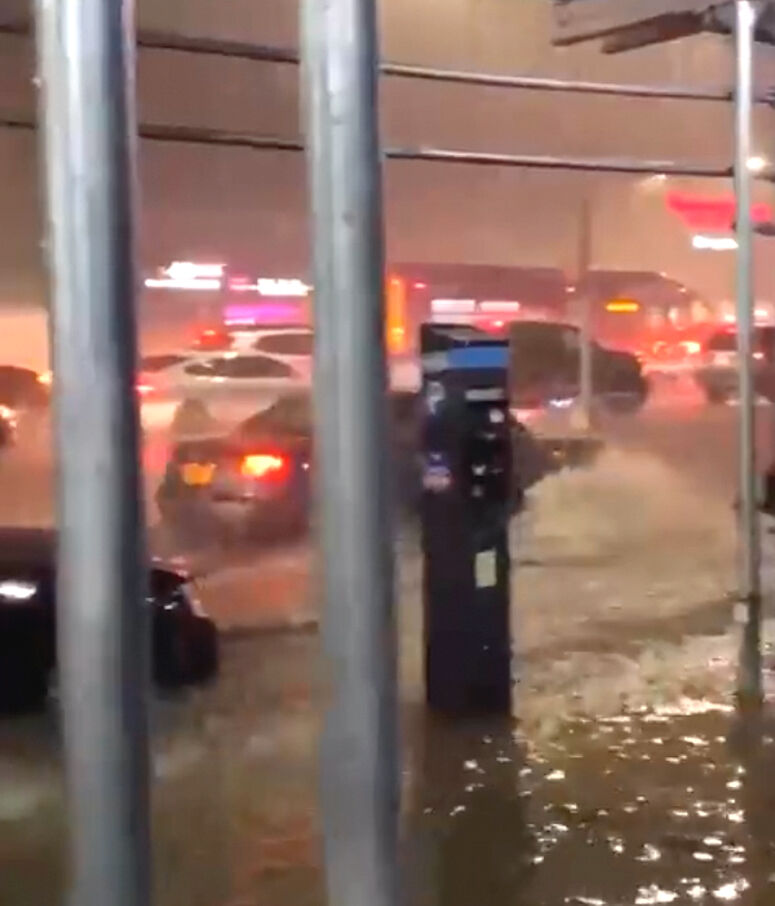 A green taxi is stopped on a street in Elmhurst while woman approaches what appears to be her vehicle behind it, left. An SUV, right, barrels through the corner of Parsons Boulevard and 33rd Avenue in Flushing.

Manholes turned into geysers, shooting water onto streets where an SUV might make it but a compact could not. A stuck bus filled with several inches of water. Basements flooded out. Subway stairs turned into waterfalls. And, tragically, a number of deaths.

When the remnants of Hurricane Ida hit Queens and the greater New York region with unexpected force last Wednesday, they prompted the first-ever flash flood emergency warning for the city along with, later on, a travel ban. The storm shattered the record for the most rainfall ever recorded in one hour in the city, dropping 3.15 inches on Central Park in one 60-minute period, far more than the 1.94 inches that came down less than two weeks ago during Tropical Storm Henri, according to USA Today.

As the storm raged, countless residents and visitors posted video of flood and fury on social media, many saying they have never seen what they were seeing before, at least not where they were seeing it. Among them was Christopher Barca, a Flushing resident who’s been in Queens about 12 years, since his time at St. John’s University. One of his videos was posted at 10:50 p.m. on Twitter.

“So this is 33rd Avenue in Flushing, one of the highest points in the neighborhood,” Barca, a weather buff and former Queens Chronicle editor who posts at @cbarca_, said as he recorded the rain pouring down and the water piling up. “As you can see, it’s become an actual river.”

“Traffic stops,” he narrates as he heads down the block. “The entire sidewalk is flooded. This isn’t even the worst part. As you get further down to the intersection of 33rd and Parsons, it’s actually significantly worse. I’ve lived in this neighborhood for about eight, going on nine years, lived in Queens for about 12, and I’ve never, ever seen this kind of flooding in this neighborhood.

“This is definitely not one of the more flood-prone areas of the borough, that’s for sure, but it is today. I mean, this is ankle-deep right here. It actually gets significantly heavier this direction ... this is whitewater rapids kind of flooding.”

He notes that it’s “significantly worse” at the intersection — though earlier, the water there had been above his knees.

Twitter was full of videos of the flooding in Queens, many of them more intense than Barca’s and some narrated in a different manner.

“Yo, what? No; this guy’s a f---in’ idiot,” Twitter user @eddyisboring posted as he filmed a car driving through floodwaters. “He’s gonna get stuck,” he said, drawing out the last word.

“Oh, this man is sick,” he continued as the driver stopped, backed up and stopped again.

Over in Elmhurst, @JVBetaPhotos posted a vignette from his street, focusing on a woman who was walking through water up to her thighs toward a parked Lexus SUV, which was inundated nearly up to the top of its tires. Also prominent in the scene was a green cab, a Toyota Camry, that apparently was stalled out in the flooded street.

“All right, so, here in Queens, we have a taxicab that stopped in the middle of the road,” the narrator says. “We have people — I don’t know why that lady is out, really, unless she’s trying to move her car. Her car is screwed if that’s her car.”

Twitter user @PDTV3 had it worse, posting video at 12:30 a.m. from the hallway of his apartment building in Woodside that showed residents wading through water up to their thighs.

“You got your bathing suit?” one person asks another as people pass each other in the hallway.