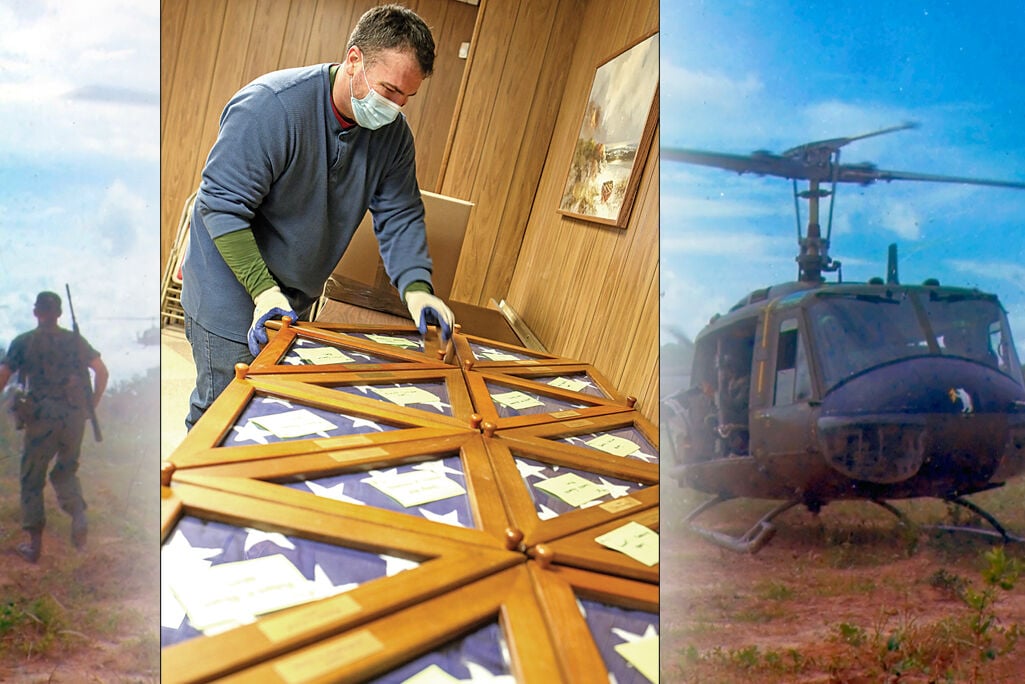 A mover arranges memorial flags for more than 125 vets who died in recent years without family to claim them. 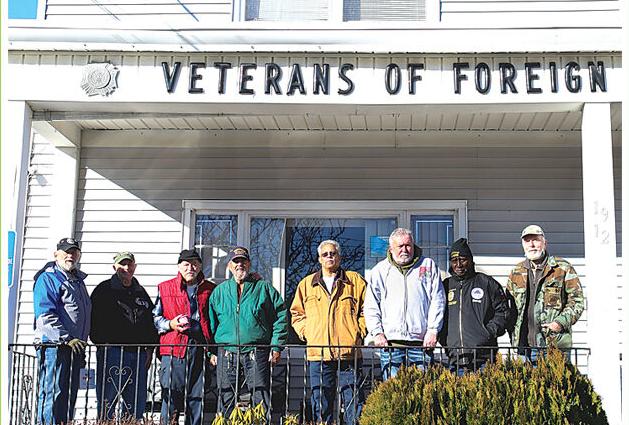 The VFW Post on 149th Street in Whitestone, home to the Vietnam Veterans of America Chapter 32 for the past decade, is being sold. The Polish Legion of American Veterans Post 4 in Maspeth will serve as the new home. Chapter members discussed their experiences and life after the war while helping with the move last Saturday. 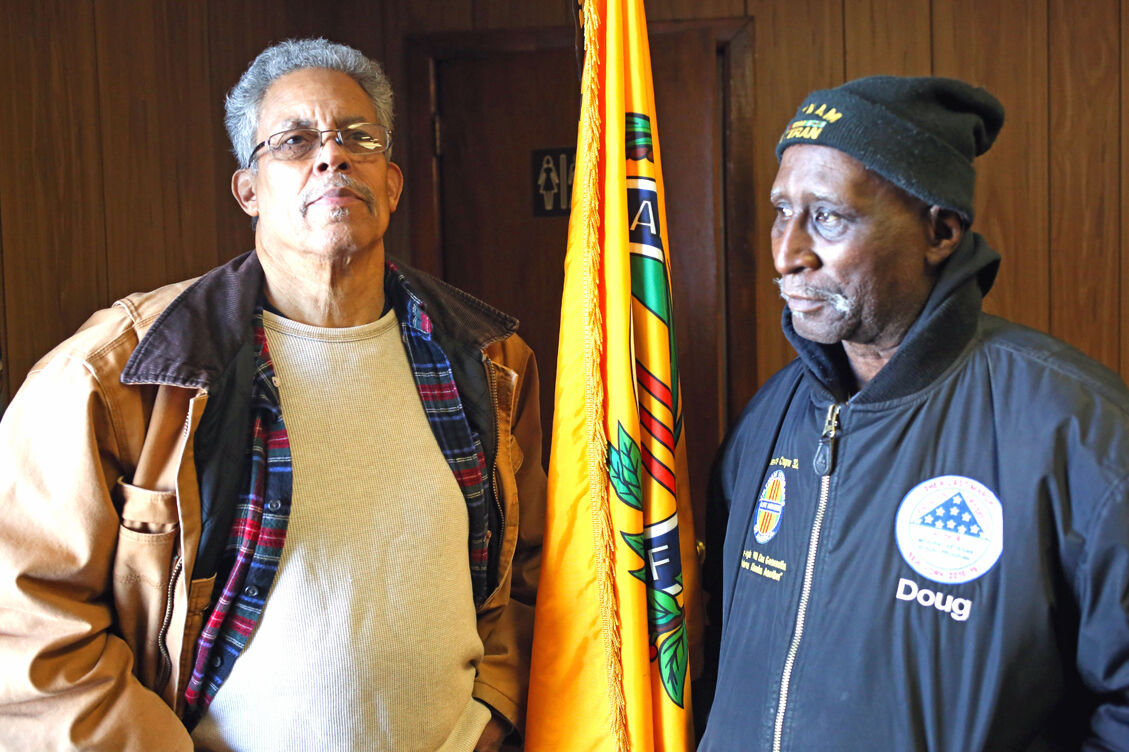 The VFW Post on 149th Street in Whitestone is being sold, left. Mike Daughtry and Doug Williams, center, joined the VVA in large part to reach out to other, less well-off veterans. 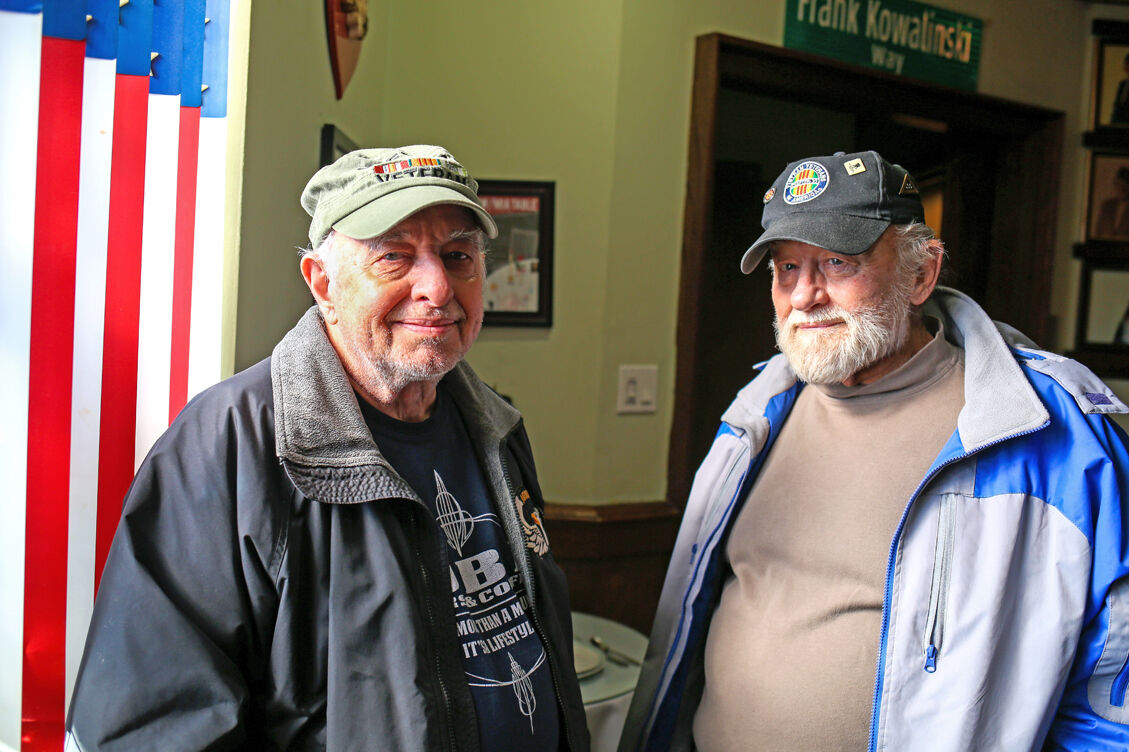 Paul Feddern was sent to Vietnam three months after his brother Russ, right, a former Marine, returned from Southeast Asia.

A mover arranges memorial flags for more than 125 vets who died in recent years without family to claim them.

The VFW Post on 149th Street in Whitestone, home to the Vietnam Veterans of America Chapter 32 for the past decade, is being sold. The Polish Legion of American Veterans Post 4 in Maspeth will serve as the new home. Chapter members discussed their experiences and life after the war while helping with the move last Saturday.

The VFW Post on 149th Street in Whitestone is being sold, left. Mike Daughtry and Doug Williams, center, joined the VVA in large part to reach out to other, less well-off veterans.

Paul Feddern was sent to Vietnam three months after his brother Russ, right, a former Marine, returned from Southeast Asia.

Mike Daughtry brought the Vietnam War home with him in a very real way.

To this day, he carries about 20 pieces of shrapnel in his leg and back — the legacy of a misguided artillery shell fired by his own men in 1968.

His wound has for years been triggering metal detectors at airports and the like. “The sensitive ones, not the regular ones,” he said.

Like most other members of the Queens’ Chapter 32 of Vietnam Veterans of America, Daughtry — now 75 and retired from a working life at General Motors — joined the group many years after he was discharged.

The stories the members of VVA tell are remarkably similar. After raising a family and retiring from their jobs, they had the time and emotional room to deal with what had happened to them after coming home from the most unpopular war in American history.

VVA Chapter 32 lists some 240 members on its website. About a dozen showed up last Saturday to supervise the closing of its headquarters in Whitestone and the move to a new home in Maspeth.

Only one or two of the VVA vets who took part in the move last weekend had ever been to the group’s new home, a converted firehouse on Maspeth Avenue that is now Post 4 of the Polish Legion of American Veterans USA.

The VVA had been renting space for about a decade in a Victorian-style house on 149th Street owned by the Veterans of Foreign Wars Post 4787, said Paul Feddern, treasurer of Chapter 32.

The VFW Post was down to its last few members. Financially, it had been limping along with the help of VVA and the income from renting out its large community room for catered parties.

The Covid-19 lockdown wiped out the party business and, last year, the VFW told the VVA it was going to sell the building, Feddern said.

“The commander [of the Maspeth post] is also a member of our group,” said Feddern. “He invited us.”

Three workers from a Maspeth moving company, GMS Transfer, did most of the heavy lifting last weekend, loading a single truck with the chapter’s well-used office furniture, files and — perhaps its most heartfelt holding — a collection of funeral flags in triangular, wooden cases.

The armed services provide upon request flags to drape the coffins of vets at funerals. After burial, the flag is presented as a keepsake to the family of the deceased “on behalf of the President of the United States and a grateful nation.”

For the last 12 years, Chapter 32 has volunteered to accept the flags of indigent vets who died in Queens. By the time of the move, the chapter had collected more than 125 flags, which it displayed in neat rows on the walls of the Whitestone headquarters’ basement.

“Main concern,” read an email inviting members to aid the move out of Whitestone last Saturday, “is making sure the encased flags are properly stacked for safe transport. Arrive early for coffee and donuts.”

Unlike older vets groups like the VFW or American Legion, the members of the VVA didn’t join seeking a social club or something to get them out of the house on weekends, they said.

Vietnam had been a vastly different war than World War II or even the Korean War, and the after-conflict experience of its veterans was just as disparate.

“When we got back, we didn’t have a lot of pride in what we did,” said Feddern, a retired NYPD detective from Glendale. “It wasn’t a thing that made you want to wear a hat saying you’d been in Vietnam.”

In those days, he said, enlisting is simply what you did in times of war.

“We were following in our parents’ footsteps,” he said. “Doing the right thing.

“My brother Russ was in the Marines. I left for basic training three months after he got out.”

Assigned to a mortar crew in the 101st Airborne infantry, Feddern arrived in Vietnam in December 1967 and, shortly after, was shipped not far from the border with North Vietnam to the city of Hue. “Just in time for the start of the Tet offensive,” he said of the bloody, two-year military push from the north that marked the beginning of the end for U.S. forces there.

He and his brother joined VVA 15 years ago. “That’s when these guys started to feel proud of what they did,” he said. “We had a lot of camaraderie.”

“I wanted to do my part for the vets,” said Doug Williams, 69, who enlisted in the Navy in the early 1970s and joined VVA about 10 years ago.

“There are still a lot of vets from my time who are homeless, hungry and need someone to give them a hand,” said Williams, a member now of Community Board 3 in Brooklyn.

“Sometimes, they can talk to a vet better than anyone else,” he said. “I actually believe in what I do.”

The members are keenly aware that they represent the likely end for fraternal groups of the kind that thrived in New York after the world wars.

“People don’t feel they need to gather in-person anymore. You can get on a computer any time you want and talk about what’s bothering you.”

On the second floor of the chapter’s new digs in Maspeth, Daughtry watched as the moving men toted in the precious flag collection.

From a pile of incoming stuff, he picked up a green-and-white street sign that read “Vietnam Veterans of America Lane,” a long-ago presentation from the city’s Transportation Department at a street co-naming ceremony.

He propped it up over the flags. That way, when the VVA crew left, the regulars at the post would know whom the flag display belonged to.

“I guess it’ll work out,” Daughtry said of the move. “We’ll survive.”

Vietnam vets on the move to Maspeth