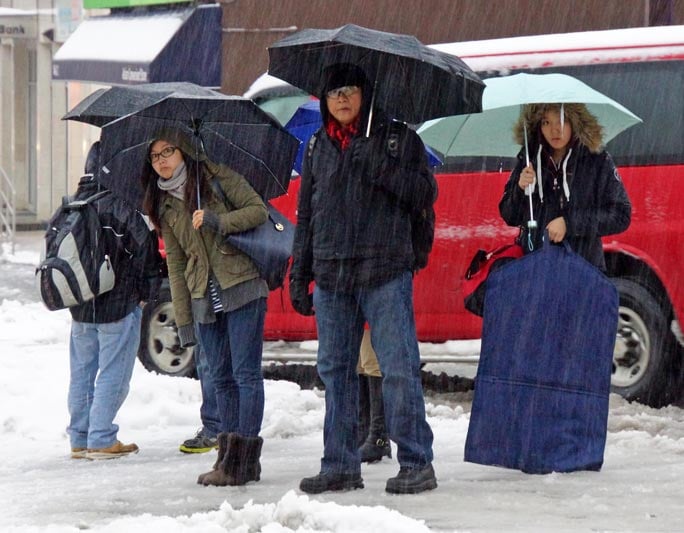 Flushing residents wait for a bus Wednesday on Northern Boulevard amid snow, slu8sh and freezing rain. Will it ever stop? 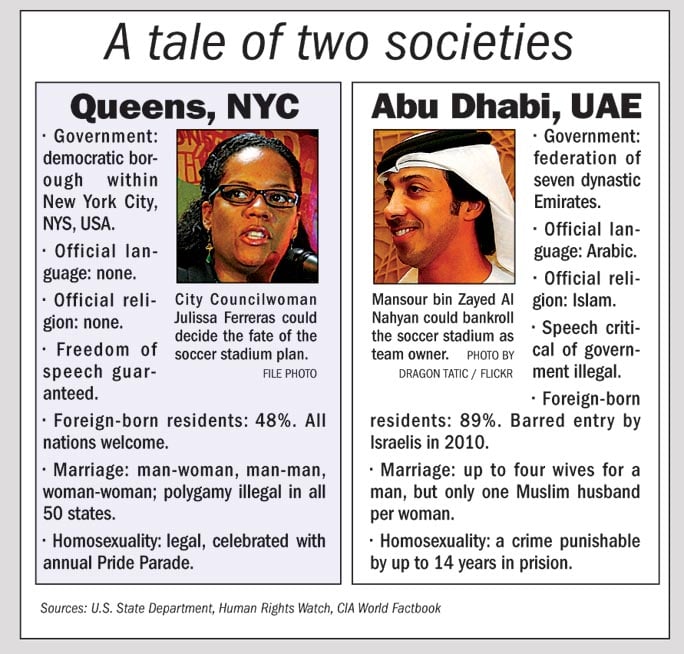 Flushing residents wait for a bus Wednesday on Northern Boulevard amid snow, slu8sh and freezing rain. Will it ever stop?

Major League Soccer’s proposal to build a stadium in Flushing Meadows Corona Park has re-emerged this week, jangling a borough that has spent the better part of three months focused elsewhere.

The league once again contends it’s weeks away from finalizing a deal with the city, as it did last fall. This time, the league may have found an oil-rich owner for the proposed franchise: Sheikh Mansour bin Zayed Al Nahyan, a billionaire member of the Abu Dhabi royal family and deputy prime minister of the United Arab Emirates.

Though MLS is reportedly still weeks away from formally announcing an agreement, various news outlets, as well as sources familiar with the negotiations, tell the Chronicle a deal is nearly done. And some members of the community are already lambasting the sheikh’s selection before it’s even official.

His wealth, they contend, is only overshadowed by his nation’s trouncing of basic human rights, a laundry list that reportedly includes: a subtly aggressive relationship with Israel; dubious women’s rights under Sharia law; and hostility towards gays and lesbians.

If the Bloomberg Administration is going to force the handover of 13 acres of Flushing Meadows to MLS, opponents contend, it better find someone other than Sheikh Monsour on the receiving end.

He also serves as the deputy prime minister, which has some holding him accountable for the UAE’s uneasy relationship with Israel, while also being cited for various human rights violations within its borders.

The UAE is often portrayed as an anodyne actor within the combative realm bookended by Iran and Israel. But reported evidence suggests otherwise.

Some instances are borderline comical, such as state-owned airline Etihad reportedly removing Israel from the touch-screen world maps passengers can stare at while they travel.

But research suggests a cozy relationship with one of the U.S. and Israel’s most hostile enemies. The Washington Institute for Near East Policy said trade between Iran and one emirate had reached $12 billion in the five years leading up to 2010. The same Dubai emirate keeps stringent rules against allowing Israelis within its borders, going so far as to prevent Israeli tennis pro Shahar Pe’er from competing in a tournament within its borders.

In 2011, the UAE also directed $34 million in humanitarian and government assistance to the Palestinian Authority.

When asked about its policy, the UAE embassy in Washington, DC said, “The UAE doesn’t have diplomatic relations with Israel.”

The U.S. State Department 2012 Report on Human Rights Practices was published on April 19, 2013, and paints a not-so-pleasant picture of the nation of about 8.5 million. It cited the UAE for arbitrary arrests, incommunicado detentions and limited civil liberties.

The country even reportedly revoked the citizenship of six residents, after they signed a petition calling for an elected parliament with executive powers. (The UAE’s seven semiautonomous emirates form a ruling class of their own, not beholden to the general population.)

For women, laws penalizing rape and domestic violence were not enforced effectively, according to the State Department. Spousal abuse and the rape of domestic employees remain a problem.

The marrying of a non-Muslim man by a Muslim woman is also strictly forbidden, while men may marry up to four women of any religious background.

The sheikh also holds a leadership position in a nation that criminalizes same-sex activity. The State Department cites one instance of a Belgian man who served a year in prison and was deported for have a same-sex relationship with another man.

The UAE’s record has the two gay members of Queens’ council delegation vehemently opposing the sheikh’s ownership of the franchise and stadium.

“I urge my colleagues in the City Council and elected officials across the state to join me in saying that New Yorkers will not do business with a murderous regime and we will not sell, trade or giveaway our public assets to those who discriminate and participate in human rights abuses,” said Councilman Danny Dromm (D-Jackson Heights).

Since last fall, MLS has kept mum on the potential Queens franchise owner. League President Mark Abbott in January said MLS was willing to begin the public review of the stadium without a potential owner.

“The plan is to continue to move forward with the [Uniform Land Use Review Procedure],” Abbott told the Chronicle at the time. “Our goal is to move this project forward. That’s where our attention is.”

Various reports have stated the league has courted Sheikh Monsour for months. And for good reason.

MLS has made repeated promises that the stadium’s construction would not include even a dime of taxpayer funding. When considering the estimated $350 million cost of the facility, a reported $100 million league buy-in fee, and the ancillary costs that come with filling a roster and staff, the list of folks able to fork over more than half a billion dollars begins to thin out. Enter Sheikh Monsour.

The still-young royal reportedly has $4.9 billion in the bank — enough to build 14 MLS stadiums. His personal wealth comes along with family lucre in the $150 billion range.

He’s already bought a middling soccer franchise in a major sports market before, shelling out $330 million in 2008 for Manchester City in England. But it’s that same wealth that has some calling any potential giveaway of parkland a bad deal.

“The potential swapping of public parkland to a family wealthy enough to purchase the vacant land necessary to construct a stadium is deeply troubling,” Van Bramer said. “To do so with the member of a royal family from a country that actively prosecutes gay men, under threat of the death penalty, for having consensual sex is appalling.”

The vast sums of money involved can be tough to process. But here’s one context that may help: Sheikh Monsour has enough cash on hand to rent 13 acres of Flushing Meadows Corona Park for over four billion years if the city and MLS agree to the $1-per-year fee previously reported in Crain’s.

“Obviously it’s absurd that public parkland is even being considered for a man of his wealth,” said NYC Park Advocates’ and Save Flushing Meadows Corona Park’s Geoffrey Croft. “It shows how desperate these guys are.”

The league demurred at the chance to speak specifically about Sheikh Monsour.

“While we are making progress on the New York expansion team, we have not finalized the ownership agreement,” MLS said in a statement. “Our discussions with potential ownership groups remain private.”

The creation of a Major League Soccer stadium has been touted as a “legacy project” for Mayor Bloomberg, whose tenure in office ends this year. So when MLS Commissioner Don Garber last Thursday said he hopes to announce a deal for MLS’s New York City franchise soon, a stream of reports from local media and sports pages snatched onto the glitz of the sheikh.

Rarely mentioned in any stories were the six community boards, Borough Board and City Council — all of which the project must navigate as part of ULURP.

Opponents of the plan claim the Bloomberg Administration is willing to muscle MLS through the community oversight process to ensure its passage during the mayor’s tenure.

“Part of what has upset this borough from the beginning is the sense that this administration and MLS have considered this as a done deal without speaking with the community,” said Councilman Peter Vallone Jr. (D-Astoria), who has opposed the MLS plan. “They take this path at their peril — the ‘this is a done deal path.’”

The stadium’s biggest obstacle may be the timetable required for its approval.

Garber and the league are reportedly expected to announce a deal with Sheikh Monsour at or ahead of Manchester City’s friendly game against Chelsea FC at Yankee Stadium on May 25.

If the league’s plans are certified this month, a rush through ULURP will likely ensue. The league could try to crush together committee and public meetings in June, forcing at least a dozen gatherings across the borough before community boards disband for their usual summer breaks.

Opponents of the project hope the natural inertia of seeking public approval may lard up the MLS plan’s progress. And they’re not shy in expressing outrage at the sheikh’s potential ownership.

But while park activists are jumping ahead of the announcement of ownership, key lawmakers are waiting for an official announcement.

Councilwoman Julissa Ferreras (D-East Elmhurst), whose district includes the chunk of the park affected by the proposal, declined to comment about the potential owner. Ditto state Sen. Jose Peralta (D-East Elmhurst), who would likely call the project up to Albany to approve the alienation of replacement parkland.

But Dromm and Van Bramer jumping ahead of Ferreras on the matter breaks with the common councilmanic practice of deferring to the presiding lawmaker. It leaves Council Speaker Christine Quinn (D-Manhattan) in the odd bind of being AWOL on an LGBT and women’s rights issue.

The speaker’s office did not respond to requests for comment after being given Dromm and Van Bramer’s statements.

Vallone, whose run-ins with the speaker have been well-documented, said the sheikh’s involvement only reinforces his stance.

“Someone should tell the sheikh that we have a beautiful stadium which already exists called Citi Field,” he said, adding it’s a bad deal for the city. “The fact that he has obscene amounts of money makes it even more ridiculous that we would have to entice him with parkland. He could clearly put this in a much more appropriate location without using parkland.”

The league has had a quiet few months after an all-out media and local advertising push during the fall and winter to promote its proposed stadium at the current site of the Pool of Industry.

The plan calls for the creation of a 25,000-seat stadium, taking up to 13 acres of parkland that will be replaced, possibly in several locations around the borough.

But in February Garber expressed frustration with how long it was taking to iron out a deal with the city.

It left some miffed at Garber’s claim a deal could be in ironed out soon. The city is in the midst of two other big-ticket projects slated for Flushing Meadows Corona Park navigating ULURP: the proposed expansion of the United States Tennis Association’s National Tennis Center, and the redevelopment of Willets Point.

“We’re making progress,” Garber said of talks with New York City. “We continue — you’ve heard this for the last year — but we continue to negotiate with the City of New York and meet with local political folks and community leaders to get support for the stadium we hope to build in Flushing Meadows Park.”