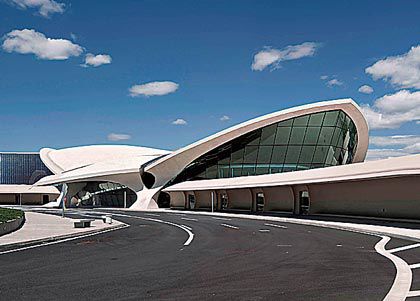 The TWA Terminal, above, built by Howard Hughes and designed by architect Eero Saarinen, is getting a second life as a hotel, the only one on the grounds of JFK Airport. 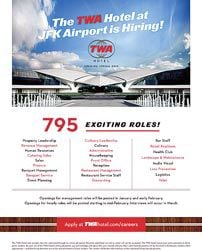 Job fairs and a website for hiring managerial and hourly workers are starting.

The TWA Terminal, above, built by Howard Hughes and designed by architect Eero Saarinen, is getting a second life as a hotel, the only one on the grounds of JFK Airport.

Job fairs and a website for hiring managerial and hourly workers are starting.

The new TWA Hotel at JFK International Airport has begun hiring nearly 800 people — from sous chefs to night managers to housekeepers — to begin work as soon as May 15, the day the hotel officially opens.

A website for the hotel (twahotel.com/careers) recently began posting a handful of job openings — most of them managerial — that the operators are looking to fill.

The ambitious, $265-million luxury hotel project, which includes the renovation of the famed TWA Terminal and construction of two towers with 505 rooms behind it, is finally nearing completion after two years.

Now attention is turning to staffing the hotel.

Representatives from the hotel are, for instance, appearing at community boards in Howard Beach and Jamaica, both next door to the airport, to talk about an upcoming job fair at Borough Hall March 12.

Queens residents will get preference in hiring, Irene Ajagbe, the hotel’s human resources director, told Community Board 13 this week.

The array of positions includes catering and banquet service personnel, kitchen staff, bartenders, front desk managers, health club attendants, landscapers, bookkeepers and stewards, according to a flier to be handed out at sites around the airport starting this week.

The hotel was conceived as a step back in time to the beginning of the jet age, when the TWA Terminal — one of the m asterpieces of mid-century American design — was opened.

Bringing the distinctive TWA Terminal back to life as a hotel — the building was closed nearly 20 years when jets got too big for it — is among the first projects slated for completion in Gov. Cuomo’s full-scale renovation of JFK.

The planners believe the hotel, with several bars and high-end restaurants, will become a social center for travelers on layovers, as well as a place to stay overnight.

Several large event spaces have been built below grade with an eye to attracting corporate conferences, trade shows and even weddings — giving guests the chance to fly in and fly out of New York without ever having to leave the JFK grounds.