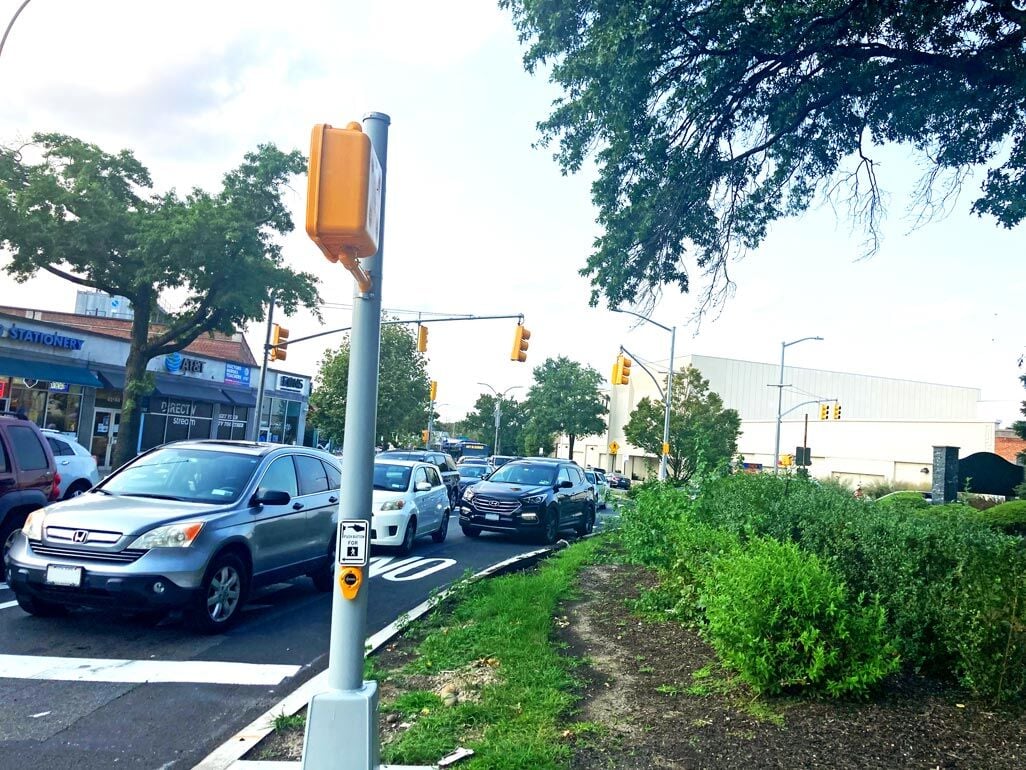 The city Department of Transportation installed several safety measures at the 188th Street and 64th Avenue circle in Fresh Meadows this summer, but residents say the new lights are poorly timed and cause terrible backups. 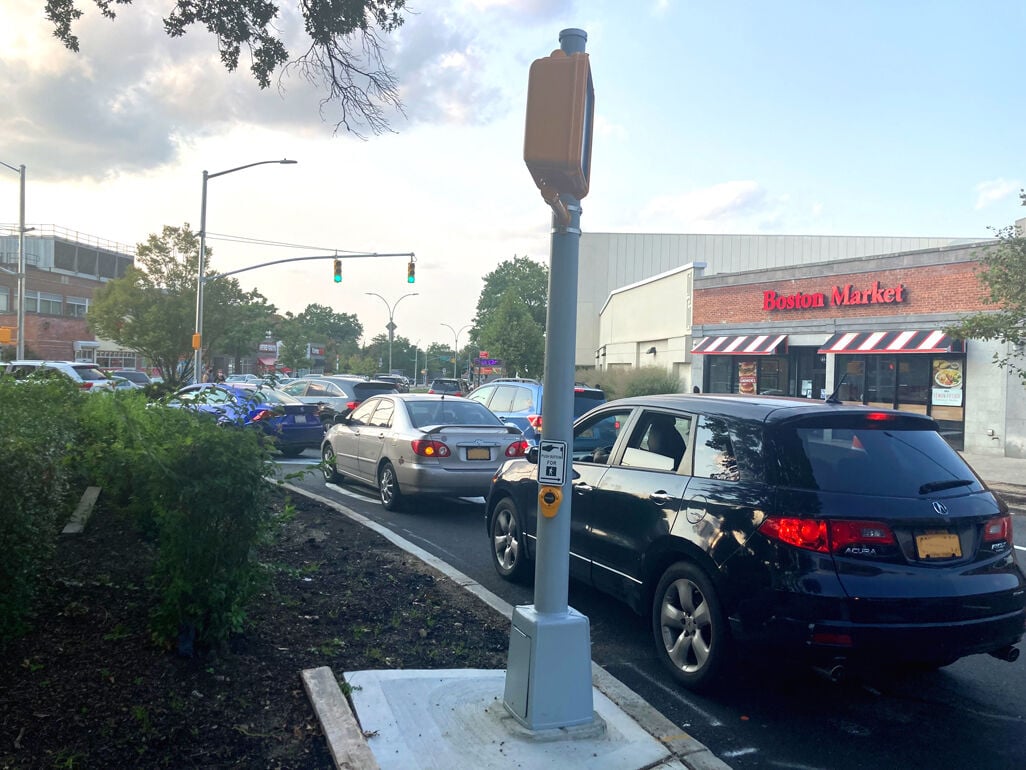 Cars moved slowly even with a green light because of congestion at the 64th Avenue and 188th Street traffic circle in Fresh Meadows Sept. 13.

The city Department of Transportation installed several safety measures at the 188th Street and 64th Avenue circle in Fresh Meadows this summer, but residents say the new lights are poorly timed and cause terrible backups.

Cars moved slowly even with a green light because of congestion at the 64th Avenue and 188th Street traffic circle in Fresh Meadows Sept. 13.

A Fresh Meadows traffic circle was outfitted with new signals, lights and delineators to increase pedestrian safety this summer, changes that area residents say have caused an insufferable increase in vehicular congestion.

“It’s a complete nightmare,” Elaine Young, president of the West Cunningham Park Civic Association, said of the 188th Street and 64th Avenue circle, which lies parallel to the Long Island Expressway and in front of the Fresh Meadows Place shopping plaza.

According to Young, the traffic lights are so poorly timed that cars cannot get through the roundabout without being halted at each one, backing up traffic for blocks. The other day, Young was stuck in the circle for 15 minutes, but she said drivers risk sitting in traffic for up to half an hour during rush hour.

“It’s a complete, unmitigated disaster,” she continued. “Many agree and have decided not to shop in that area anymore ... It’s horrible [the city has] done this to local businesses. They’ve suffered enough and now they have this problem.”

The circle’s stop signs have been replaced by lights at each quadrant. The city Department of Transportation installed north, east and west legs to the circle, expanded median tips and reorganized roadway markings on 64th Avenue.

A spokesperson said the changes were influenced by numerous accidents between 2012 and 2016. Over that period, there were 77 total injuries, two of which were severe, and one fatality, along the stretch of 188th Street between the Horace Harding Expressway and 73rd Avenue.

The fatality occurred closer to 73rd Avenue after a driver turning left from the grocery store parking lot struck a pedestrian, prompting the DOT to install flexible delineators to restrict the dangerous northbound left turn out of the lot.

“To protect pedestrians at this location, we’ve been making safety improvements this year in response to requests from elected officials and the Community Board,” a spokesperson told the Chronicle in an email. “The new traffic signals and concrete refuge spaces give pedestrians safer ways to cross the traffic circle. Installation is nearly complete, but we do anticipate there will be a period of adjustment as drivers get used to the new conditions, so we’re monitoring conditions and are prepared to make adjustments as needed.”

Jim De Bonet, the former president of the Flushing Heights Civic Association, agrees that the circle is in need of safety improvements — he can recount two incidents in which he was nearly struck by drivers flying through.

“A few years ago, and a year ago I was passing from the circle to the sidewalk on 188th Street and was forced to hurry because of rushing cars towards me,” De Bonet recalled. “The last time, I had to jump out of the way because the car almost hit me. I was with a cane due to an injury to my left knee.”

De Bonet said he filed complaints with the community board because “something had to be done before someone got killed.” However, he doesn’t believe traffic flow has to be sacrificed in order to achieve significant pedestrian safety.

Sol Sturm, president of the Fresh Meadows Tenant Association and area resident of 45 years, called the current design “horrible” and believes most of the traffic lights should be deactivated. There are too many to be functional, he said.

“I think the design of this project is really one of the least effective that I’ve ever seen anywhere by any city agency because it’s making things less safe than they used to be,” Sturm said.

As a retiree, he said that sitting in traffic is a nuisance for him, but debilitating for those who need to get to work on time. Frustration could lead to road rage, which could result in vehicular accidents.

Sturm also questioned what will happen when an emergency vehicle needs to pass through the circle. The cars are so packed together and unable to move that he foresees it being a disaster.

“It’s a mess. It’s a real mess,” Sturm continued. “It’s mind-boggling ... You’d think a fourth-grader did it. You’re not creating a better situation when people are just sitting one behind the other.”

During a visit to the circle Sept. 13, a delivery truck driver stuck inside the circle told the Chronicle from his window that his route has become significantly impaired since the traffic lights were installed. The stop signs, in his opinion, “made a lot more sense.”