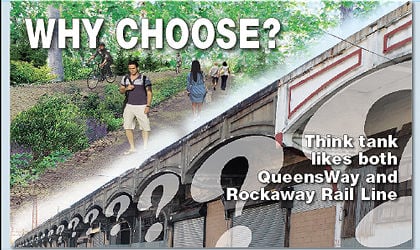 The Regional Plan Association, an infl uential think tank, recently proposed that the abandoned Rockaway Beach Rail Line be used for the QueensWay and to carry trains to John F. Kennedy International Airport, splitting the two at Atlantic Avenue. 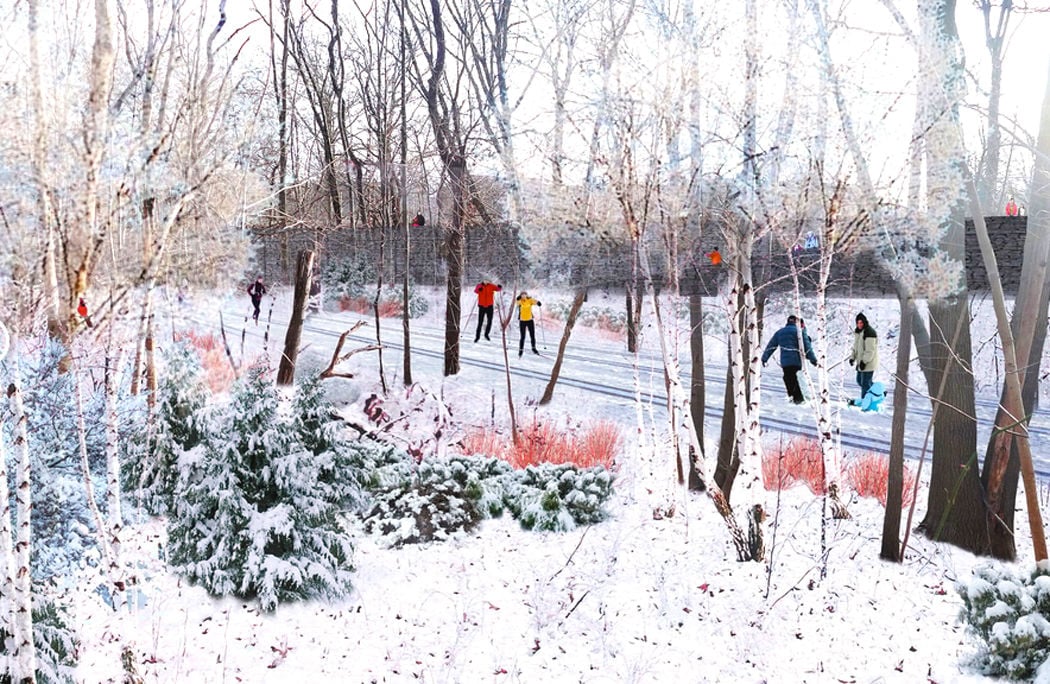 The Regional Plan Association, an influential transportation think tank, has partially endorsed both plans for the defunct Rockaway Beach Rail Line. From Atlantic Avenue south, the group supports the reactivation of the line. But north of there, the RPA believes the elevated park called the QueensWay is the right move.

The Regional Plan Association, an infl uential think tank, recently proposed that the abandoned Rockaway Beach Rail Line be used for the QueensWay and to carry trains to John F. Kennedy International Airport, splitting the two at Atlantic Avenue.

The Regional Plan Association, an influential transportation think tank, has partially endorsed both plans for the defunct Rockaway Beach Rail Line. From Atlantic Avenue south, the group supports the reactivation of the line. But north of there, the RPA believes the elevated park called the QueensWay is the right move.

The Regional Plan Association isn’t choosing the QueensWay over the Queens Rail, or vice versa.

Instead, the transportation think tank has partially endorsed both ideas for the abandoned 3.5-mile Rockaway Beach Rail Line.

In its Fourth Regional Plan, issued late last month, the RPA called for the creation of the QueensWay — a proposed park along the elevated right-of-way — between Rego Park and Woodhaven.

From Atlantic Avenue south into Ozone Park, the RPA has endorsed the reactivation of train service along the defunct line.

Under the Fourth Regional Plan, the Queens Rail would run between Atlantic Avenue and Kennedy Airport with a stop near Aqueduct Race Track in between.

At Atlantic Avenue, the service would connect to the Long Island Rail Road’s Atlantic Branch — which itself would be extended west from Atlantic Terminal in Brooklyn into Manhattan.

That would give train proponents that 30-minute one-seat ride from Manhattan to JFK many have advocated for.

“It is clear that many neighborhoods in Queens would benefit from more safe space for people who walk or bike,” the think tank said of the QueensWay. “This line has been abandoned for over 50 years, and the RPA believes that 80 percent of it could be turned into a greenway that would give hundreds of thousands of nearby residents more access to open space and also a safer connection north-south through Queens.

“The QueensWay would bring significant local benefits and has the potential to be a citywide attraction,” the think tank added. “But the project also needs to be balanced with the regional transportation benefits that a new rail connection to JFK would bring. The RPA believes this is not an either or, but that both are important projects and should be done.”

More than $2 million has been has already been allocated or otherwise raised for the development of the northern third of the QueensWay — an approximately $150 million plan popular with many residents and leaders in Forest Hills and Rego Park.

The Trust for Public Land and the Friends of the QueensWay, the two groups pushing the plan, even hope to have the northernmost section of the proposed green space open by 2020.

Meanwhile, South Queens residents are more amenable to the rail plan — which the MTA is in the process of studying — which could cost upwards of $1 billion or more.

Councilwoman Karen Koslowitz (D-Forest Hills) has been a strong supporter of the QueensWay for years, as the defunct line sits just feet from dozens of homes in Forest Hills and Rego Park — “It’s right in their backyards. The train would be right next to their windows.”

But when informed of the RPA’s opinion during a Monday interview, the lawmaker said it would be something she would certainly be interested in.

“That would be fine,” Koslowitz said. “It’s a very decent compromise.”

While she emphatically supports the QueensWay, the councilwoman added she’s all for improving transportation for those living in the southern portion of the borough, hence her interest in a compromise.

“Certainly they deserve that,” she said of new transit options, “but not at our expense.”

In a Tuesday interview, state Sen. Joe Addabbo Jr. (D-Howard Beach) — a critic of the QueensWay who hasn’t sided with either the park or rail plan — said the RPA’s opinion sounds good in theory, but the devil is in the details.

“If you get the best of both worlds, everyone might be happy. If this could happen, of course I would be interested,” Addabbo said. “But I would have to see more details to see if it could be something I would support.”

The lawmaker has said he has deep concerns about safety if the QueensWay comes to fruition, as people using the Forest Hills and Rego Park sections of the green space would “almost be right in people’s backyards.”

The Trust for Public Land and the Friends of the QueensWay said last year they would be hiring a security consultant to study how such concerns could be addressed.

On Wednesday, the two groups issued a joint statement thanking the RPA for its words about the “world-class, family-friendly” project.

“They have recognized the significance of this project in serving as an alternative transportation corridor, and the many benefits it will bring,” the two groups said. “Our support for this project continues to grow, and we are hopeful that Mayor de Blasio will respond to the growing coalition of citywide and local organizations endorsing the QueensWay — a first phase of which is fully conceptualized and would enhance and beautify its surrounding neighborhoods.”

The Regional Plan Association's plan is a bit like being a little bit pregnant.

The idea is a non-starter.

And the several years long borough civil war between Queensrail and southern Queens and Queensway and Northern Queens along the Rockaway Beach Branch. [beam]

So the northern section of the originally proposed 3.5mi Queensway gets a beautiful elevated park and the southern section which was to provide much needed outdoor recreation space for residents, gets more transportation to JFK?

All while the empty Airtrain to JFK is a $15, 35min trip from midtown Manhattan-

The RPA has bucked to political pressure by suggesting that the majority of the Rockaway Beach Branch (AKA QueensRail) be used for a park instead of a rail line.

This is an unobstructed right of way with zero grade crossings vs.at least 11 grade crossings and other challenges that the Lower Montauk Branch faces. Like the park itself, this proposal is just another way of NOT reconnecting south Queens with the rest of the City.

The Coalition for QueensRail has proposed that this critical rail link be rebuilt along its original route and if money can be found to put it underground with a park on top, so much the better.

Let's stop playing politics and do what's right for the majority of people for a change.