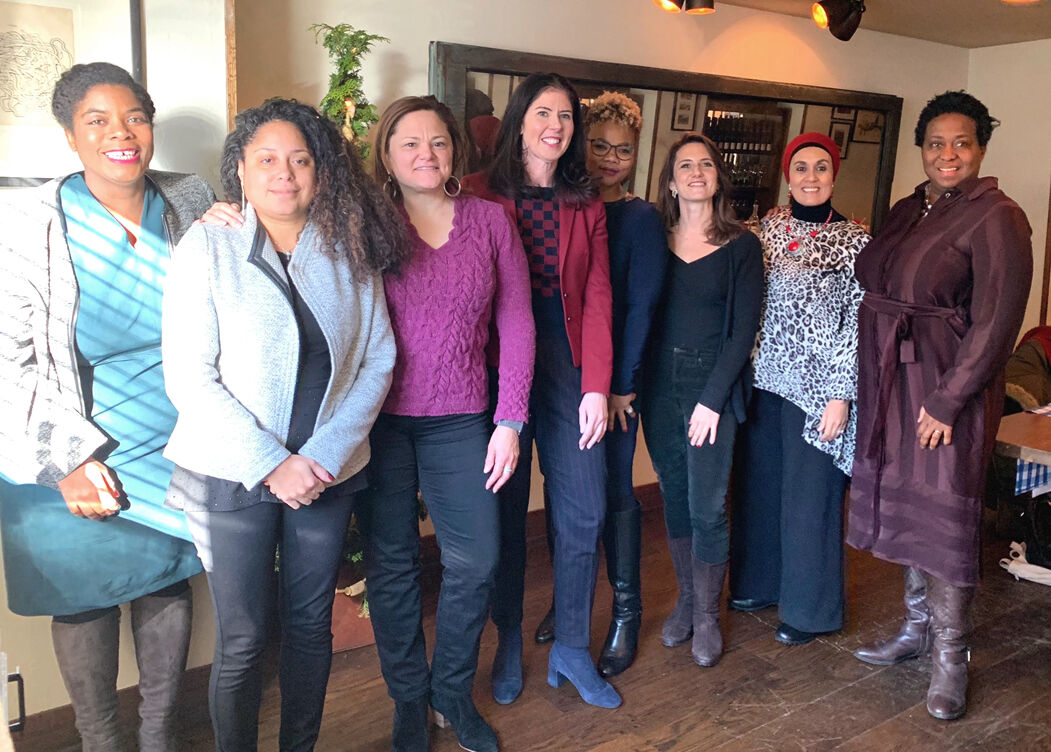 Amelia Adams, left, Camille Rivera, Melissa Mark-Viverito, Elizabeth Crowley, Yvette Buckner, Elyse Buxbaum, Debbie Almontaser and Beatrice Sibblies are eight of 21 in ’21’s 11 board members who vote on whom the organization will throw its support behind in the City Council elections. 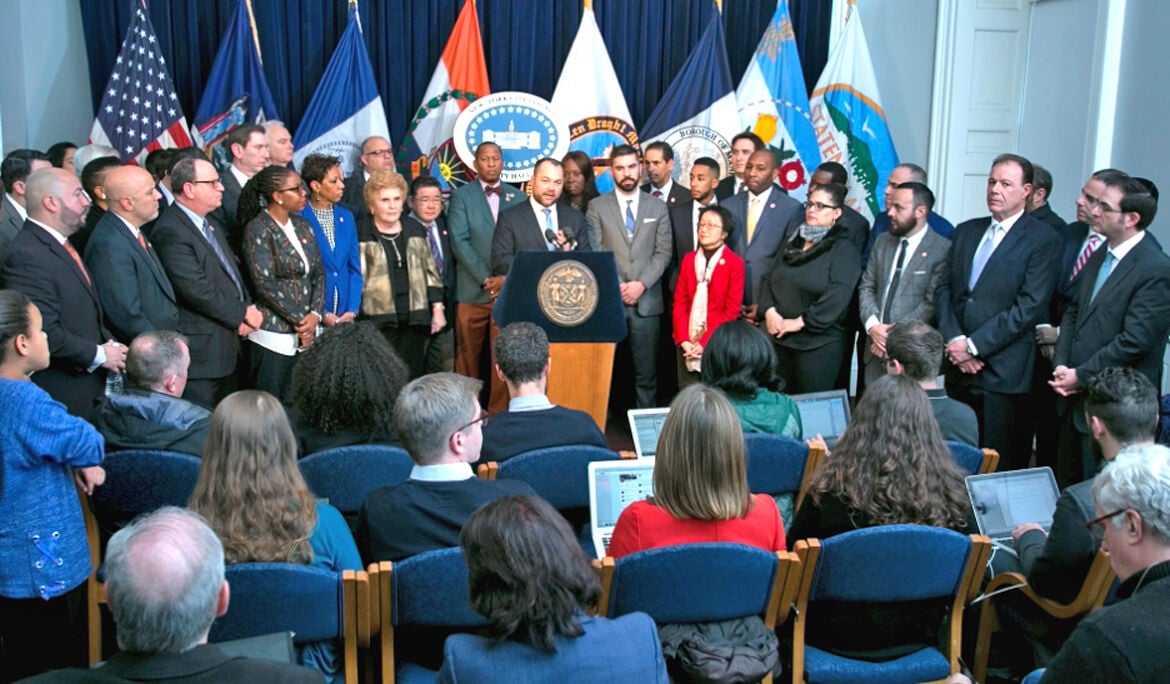 As of 2020, fewer than 20 percent of the members in the New York City Council are women, a condition 21 in ’21 hopes to change in the coming election year.

Amelia Adams, left, Camille Rivera, Melissa Mark-Viverito, Elizabeth Crowley, Yvette Buckner, Elyse Buxbaum, Debbie Almontaser and Beatrice Sibblies are eight of 21 in ’21’s 11 board members who vote on whom the organization will throw its support behind in the City Council elections.

As of 2020, fewer than 20 percent of the members in the New York City Council are women, a condition 21 in ’21 hopes to change in the coming election year.

This year is the one 21 in ’21 has been waiting for and working toward for the last three. After organizing, strategizing and educating, the feminist organization is ready to push at least 21 female City Council candidates to victory.

The group was created in 2017 after only 11 women were elected to the City Council, a total that made up about one-fifth of the governing body. Former Councilmembers Elizabeth Crowley and Melissa Mark-Viverito, both of whom left the chamber at the end of that year, found that the lack of representation was unacceptable and established 21 in ’21 to bump the total of women representatives up to at least 40 percent.

Since the group began three years ago, the number of women councilmembers grew by just two.

“When you think of the New York City Council — we don’t have one woman on each committee without doubling up. That’s an issue,” said Amelia Adams, the organization’s executive board chairperson, noting that there are 36 Council committees. “Representation is not there.”

With a majority of councilmembers being pushed out because of term limitations, 21 in ’21 hopes to fill the gaps with progressive-minded feminist officials.

The election season will also be the first to utilize ranked-choice voting, which allows voters to cast their ballots for up to five candidates in a priority-based sequence. 21 in ’21’s endorsements per Council race reflect the new system and rank endorsements in a similar fashion. For example, 21 in ’21’s first choice to replace Jimmy Van Bramer (D-Sunnyside) in District 26 is Democrat Julie Forman, followed by Julie Won and then Hailie Kim.

“We have to be intentional,” said Adams.

The process to fill the Council with more women begins with the Feb. 2 special election for the District 24 seat, which was left vacant after Rory Lancman, who had been term-limited anyway, formally resigned in November to begin a new post as special counsel for ratepayer protection with the Governor’s Office. Though there are three women running, the organization has only endorsed one — small business owner Deepti Sharma.

To be considered for endorsement, candidates must be able to check off each point on 21 in ’21’s checklist, the most important being that they identify as a “womxn.”

“I don’t think it’s controversial,” Adams said on the gender limitations. “We are at this place where there are only 13 women in the Council because people are not prioritizing it. In order for us to achieve our goal — the reality is men, especially, need to give up something.”

Or as the group said in a Sept. 4 tweet: “It’s time to get in formation, say bye to these boys, and achieve full representation for womxn on the [City Council] in 2021.”

Though the organization won’t endorse a male candidate, even if he is a progressive, feminist figure, that doesn’t mean men are excluded from participation. They can become members, donors and supporters.

Other 21 in ’21 candidate requirements include reflecting the values of gender equity within their own campaign staff and platform points as well as committing to civil discourse for an inclusive and transformational form of government.

After conducting interviews with each candidate, the Board of Directors votes in the same fashion the rest of the city ultimately will for the June 22 primaries and Nov. 2 general election: by ranked choice voting.

21 in ’21 ended up endorsing 68 women ahead of their primaries. According to the organization, the first-ranked choices are 76 percent women of color, 76 percent first-time candidates, 9 percent LGBTQ+, 52 percent mothers and 21 percent who served as essential workers during the pandemic. Almost all the candidates are Democrats; Felicia Kalan, running for Costa Constantinides’ (D-Astoria) District 22, is the only 21 in ’21-endorsed Republican candidate, though the organization did endorse three Democrats who could face her in the November general election.

Though most of the 51 Council seats are up for grabs in the 2021 election, the organization has only endorsed candidates running in 32 of the races. Speaker Corey Johnson’s (D-Manhattan) seat, for example, is left vulnerable by his term limitations, but 21 in ’21 has not endorsed either of the two women vying for it. The reason, Adams said, is because the board would rather stay out of the race than throw support behind a candidate just for the sake of endorsing a woman, especially if her values misalign with the organization’s.

• Selvena Brooks-Powers first for District 31, followed by Monique Charlton and Latoya Benjamin; and

Aside from two special elections in February, primaries are scheduled for June and the general election for November, at which time 21 in ’21 hopes to have achieved its goal.

But what happens next?

“We joke and say 51 in ’31,” said Adams on the group’s future. “We have started discussions and we’ll try to make a determination because in order to plan for the future you have to start now.”

For now, the organization is focusing solely on the City Council races in the year ahead. Even though the city mayoral election coincides with the Council elections and features a few female candidates, Adams said 21 in ’21 won’t play into the race.

In the meantime, 21 in ’21 is actively growing its base and members. Adams said the mostly volunteer group is looking to hire qualified and ambitious women. The group continues to collect membership dues as well as generous donations from supporters and sister organizations. Throughout the election year, 21 in ’21 will continue its virtual programming on a wide array of issues, such as housing and climate change, to educate members of the community.

“The board has been amazing. We have great supporters and we’re getting the work done,” Adams said.