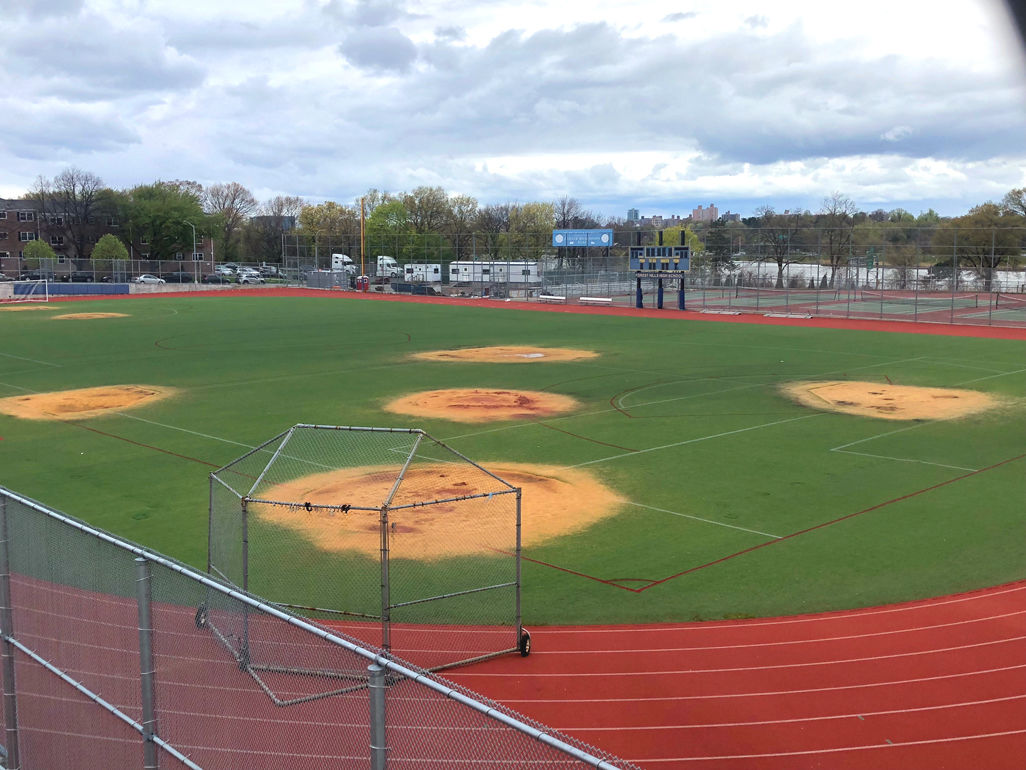 With schools closed because of the coronavirus crisis sports have come to a halt in addition to classes as teams aren’t competing and seniors realize they’ve already played for their schools for the final time.

Bayside third baseman Sebastian Cabrera spent months recovering from a torn labrum so he could play his senior season only to see the coronavirus stop the school year and games.

With schools closed because of the coronavirus crisis sports have come to a halt in addition to classes as teams aren’t competing and seniors realize they’ve already played for their schools for the final time.

Bayside third baseman Sebastian Cabrera spent months recovering from a torn labrum so he could play his senior season only to see the coronavirus stop the school year and games.

Sports have gone missing as schools have closed amidst the coronavirus crisis.

Brown misses coaching even more than watching the Mets. And he feels terrible for his players.

“I can get past it,” he said. “I’ll coach next year. I’ll be fine. But the kids worked hard the whole year for this just for it to be taken away.”

The team had a dozen practices and played a nonleague game. Brown hasn’t seen his players since the abrupt shutdown.

“It’s terrible for the kids, especially the seniors,” he said. “It’s not even just baseball but prom, graduation, senior day.”

There were six seniors on the 18-player roster who won’t play for Bayside again.

Third baseman Sebastian Cabrera spent fall and winter rehabbing a torn labrum to get back on the field for his senior season and get recruited by colleges.

“One of the biggest baseball years of my life right in front of me and it just came to a halt,” he said.

Cabrera went through physical therapy along with a throwing and hitting program and is now at 100 percent physically. He still wants to play college baseball, saying that he’s looking at a few schools.

The third baseman said he was shocked when the schools closed.

“I was really looking forward to this season, playing with some of my freshman friends that I didn’t get a chance to play with last year ... and my last dance with the seniors,” Cabrera said. “Some guys I’ve been playing with since I’m 10 years old and this isn’t the farewell I imagined.”

This season is the first in nearly a half-century that Marty Finkelstein won’t be coaching. The junior varsity baseball coach at Cardozo High School — “the team looked terrific” in five practices before the shutdown according to the coach — is staying at home and watching old sports films.

Finkelstein, who led Forest Hills’ varsity baseball team to the city title in 2000, enjoys highlights of two of his favorite pitchers, Hall of Famers Nolan Ryan and Sandy Koufax.

“I’m staying in touch with baseball,” he said. “I have no choice.”

Baseball, lacrosse, cricket and flag football are just some of the sports that have stopped because of the coronavirus.

Handball standout Gabriella Sullivan was ready for her senior season at Forest Hills High School. She won the PSAL individuals last year and lost only once in three seasons.

In the early days of the crisis, Sullivan and her friends were confident schools and sports wouldn’t need to shut down. But then they did.

When Sullivan sat down to think about what she cared about she thought about handball.

“To see it end so suddenly, before we even got our jerseys, hit me,” she said.

Sullivan will be attending Queens College in the fall and wants to play volleyball, which she also plays at Forest Hills.

Not only was Sullivan playing handball competitively for Forest Hills but she would also play at parks outside school.

“Not being able to pass by a handball court is tough,” she said.

Tara DelMaestro coached the girls handball team at John Bowne High School to the city championship game last season. The runners-up were heavy with seniors and this season’s roster saw a lot of new girls.

“They were eager to play and excited,” DelMaestro said.

She said there are students who haven’t been outside at all since the lockdown and that there were some who “finally had a life” after the school day was over.

“Their outlet was sports,” DelMaestro said.

She’s been coaching 17 seasons and this was going to be her last. But DelMaestro, who wants to spend time with her two young children, plans to return for one more given everything that’s happened.

She said she also has a message for her students who are sad about not being outside during the crisis.

“We’re all in this together,” DelMaestro said. “We’re going to make it through this and be outside together again.”