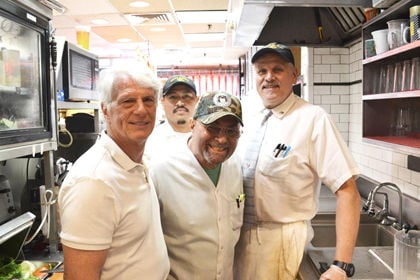 Ben’s Best Delicatessen owner Jay Parker, left, and his staff will no longer be serving up their famous pastrami in a few weeks time, as the culinary icon will be closing its doors for good on June 30. Parker said last summer’s installation of bike lanes, replacing parking, outside the Queens Boulevard eatery led to a 25 percent decline in business, forcing the closure. 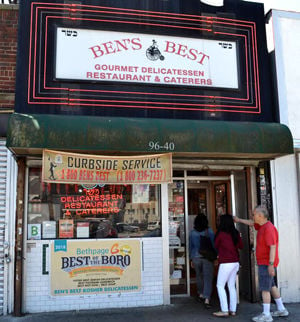 The famed Ben’s Best Delicatessen will close its doors for good on June 30. Owner Jay Parker blames the installation of bike lanes on Queens Boulevard.

Ben’s Best Delicatessen owner Jay Parker, left, and his staff will no longer be serving up their famous pastrami in a few weeks time, as the culinary icon will be closing its doors for good on June 30. Parker said last summer’s installation of bike lanes, replacing parking, outside the Queens Boulevard eatery led to a 25 percent decline in business, forcing the closure.

The famed Ben’s Best Delicatessen will close its doors for good on June 30. Owner Jay Parker blames the installation of bike lanes on Queens Boulevard.

When you walk through the doorway of Ben’s Best Delicatessan in Rego Park, you’re greeted by the likes of former President George W. Bush, former Secretary of State Hillary Clinton and even Pope John Paul II.

Well, pictures of them with the famed eatery’s owner, Jay Parker, at least.

While the wall across from the deli counter is an impressive collage of global figures, no image in the eatery looms larger — literally and figuratively — than the dining room painting of Parker’s late father, Benjamin, who founded the 96-40 Queens Blvd. establishment in 1945.

The elder Parker died in 1984, with the younger one taking over as owner of the iconic deli. And more than 30 years later, Jay Parker can still remember his father’s parting piece of advice

“When I bought the store from my father,” Parker said, “his parting words were, ‘Hey, try not to f--k this up.’”

Over the last three decades, Parker helped grow the deli from a neighborhood staple to a national treasure — Ben’s Best employees have catered fundraisers for federal lawmakers, while the establishment has been featured on the Food Network, Travel Channel and in Hollywood productions.

In a sitdown interview with the Chronicle and another outlet on Tuesday, Parker said the business was running along “fat, dumb and happy” until last August.

That was when the Department of Transportation laid down a bike lane on both the eastbound and westbound Queens Boulevard service roads between Eliot Avenue in Rego Park and Yellowstone Boulevard in Forest Hills.

To make room for the cycling paths, the city removed 198 parking spaces along the 1.3-mile stretch of service road, while also adding curbside delivery-only zones.

That move, Parker said, sent Ben’s Best’s bottom line into a tailspin — one that, despite his past success, he ended up being unable to recover from.

After 73 years in business, Ben’s Best, one of the most famous kosher delis in America, will close on June 30.

“We tried marketing, we tried promotions, we cut back on additional expenses,” he said. “Every month, it got worse and worse ... we couldn’t move the needle. We’re in hospice mode.”

Sales have plummeted 25 percent since last August, as Parker said customers have been scared away by both the lack of parking and the $95 tickets they get when they unknowingly park in a loading zone.

One diner even walked up to Parker during his interview with the reporters to both thank him for his service to the community and to say that he just got a parking ticket for being in a loading zone.

“It’s still a great pastrami sandwich, but how much pain and suffering are you willing to take to get it?” Parker asked. “If you can’t get here, you can’t eat here.”

The decision to close, the owner said, was not made lightly.

In order to stay open, Parker took a number of initiatives, including meeting with social media influencers in the hopes of attracting more customers and participating in a marketing event with Yelp, the popular restaurant reviewing website.

But what he declined to do was fire any of his longtime employees in order to save money.

“This is more of a family than anything else. I’ve worked with Richy [Meseika] for like 35 years. He’s my work wife,” Parker said. “I couldn’t fire anyone. We all go out together, anyone who helped me build this business.”

The owner added that he’s been in touch with other eateries across the area in order to find his employees new jobs.

But Meseika said that after making good money at Ben’s Best for more than 30 years, not only does he not want a new job, he doesn’t think he can afford to still live in Suffolk County even if he got one.

“I’m not going to get a new job just so I can pay my taxes,” he said. “I’m probably going to sell and move down south where it’s cheaper to live. I was looking to retire in a year and a half but now I have to fast forward.”

One of them, a Montana native named James, said he first heard of Ben’s Best when he was on a trip in Denver.

James, who asked that his last name not be published, said it wasn’t until he moved to New Jersey a few years ago that he was able to visit the deli — which was everything he expected and more.

“My first sandwich was phenomenal. I thought it was way better than Katz’s,” James said, referencing the famous Manhattan deli. “I was a professional chef for 14 years and I just thought the way they cut the meat and the flavor was way better than anything I had had before.”

In a Tuesday statement, Councilwoman Karen Koslowitz (D-Forest Hills) said she was “dismayed and saddened” about the neighborhood institution’s closing.

An initial supporter of the bike lanes’ installation, the lawmaker said she is in the middle of planning a rally against them — an action she has rarely taken in her time in office.

“I am not opposed to the concept of bike lanes. But I am opposed to the imposition of bike lanes without regard to its impact on a neighborhood,” she said. “I will be holding a rally in the near future to demonstrate the depth of the community opposition to these bike lanes and their negative impact.”

Asked what he plans to do in retirement, Parker said he has other interests he would like to pursue — with more mountain climbing across the world being one.

But before he attempts to tackle Mount Everest, which he said he hopes to try, he has to get through June 30 — an “emotional day” that will end with him taking the image of his father off the wall.

“I walk in every morning, I look at the picture of my father and say the same thing: ‘Why not real estate?’” Parker joked. “I could have done real estate.”

As others elsewhere have tirelessly pointed out with facts and figures, the bike lane had NOTHING to do with this deli closing and the guy is bringing shame and disrepute onto himself by continuing to claim that it did. Kosher delis have been closing all over New York for the simple reason that the cultural and demographic landscape has changed and the market for them has shrunk dramatically. No amount of parking would have changed the fortunes of a deli which would have closed anyway.

Studies have shown that bike lanes, pedestrianization and the removal or reduction of traffic in general do NOT adversely affect the revenue of local businesses - in fact in many cases business thrives afterwards. These community boards are full of bitter, twisted old people who refuse to update their world view even in the face of confirmed facts and objective reason. Many of them are unbelievably selfish people who would quite happily sacrifice human life in order to get a parking spot. People like this are a disgrace to society and should probably think about what kind of legacy they're leaving to the world. Thankfully, in 20 years time much of this old world, backward mentality will have died off.

Or perhaps his food sucks, he stopped caring, the Board of Health is pestering him about rats and most of his customers moved or died.