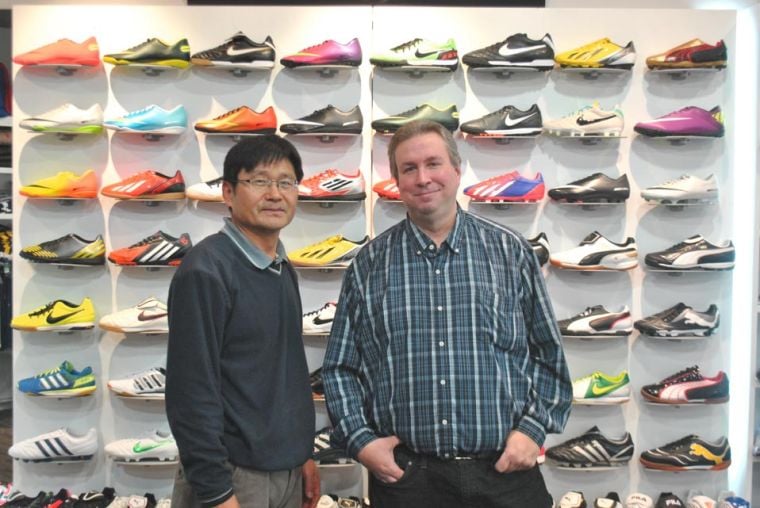 Myrtle Sporting Goods owner Moon Kim, left, stands with manager Tom Deja in front of a section of the store’s extensive soccer cleat section, one of its best sellers. The Myrtle Avenue store also features a wide range of fitted hats and jerseys. 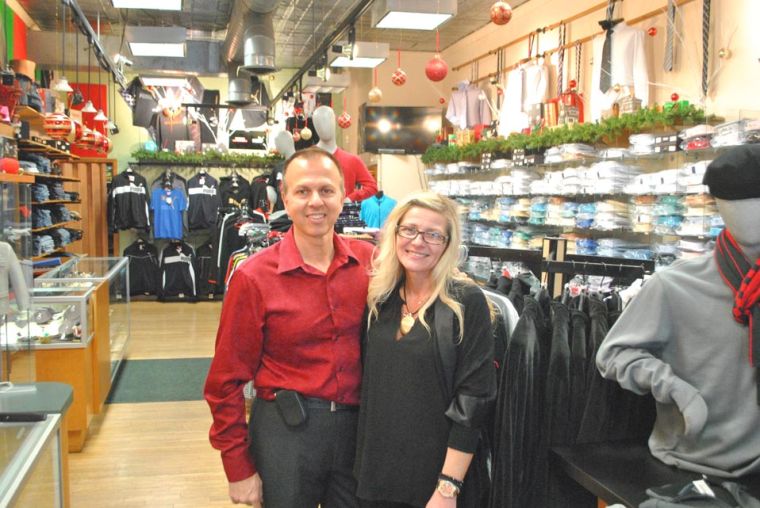 Domino Men’s Shop owner Manny Nicolosi and manager Gina Gurujan, combined with their other employees, have over 100 years of experience at the store. Nicolosi says customers come from all over the country because of the store’s personal touch.

Myrtle Sporting Goods owner Moon Kim, left, stands with manager Tom Deja in front of a section of the store’s extensive soccer cleat section, one of its best sellers. The Myrtle Avenue store also features a wide range of fitted hats and jerseys.

Domino Men’s Shop owner Manny Nicolosi and manager Gina Gurujan, combined with their other employees, have over 100 years of experience at the store. Nicolosi says customers come from all over the country because of the store’s personal touch.

With just under two weeks before Christmas, the masses are rushing to buy those last-second gifts.

But with grand Black Friday and Cyber Monday sales only available for a short time, some struggle to find great gifts at great prices.

Instead, many a shopper relegates himself to becoming just one frantic consumer in a sea of souls wandering the aisles of a large-scale department store looking for a good deal.

For residents of Middle Village, Glendale, Ridgewood and Maspeth, vibrant streets like Myrtle Avenue offer a tremendous wealth of small businesses that can be a reprieve from the season’s shopping mall monotony.

These independently owned shops can provide a great deal of fantastic gift ideas, and with the NFL playoffs fast approaching and the NHL and NBA seasons getting fully underway, sporting goods are always in demand around the holidays.

The economic recession of 2008 severely impacted small businesses nationwide, and the Ridgewood sports store is still recovering from the downturn in business.

But manager Tom Deja believes that, while the holiday shopping season is slower than normal, the store hasn’t remained a community staple for 21 years by accident.

“We have the biggest selection of fitted hats this side of Knickerbocker Avenue,” Deja said. “It’s been a slow year overall. The economy is still in the toilet but what’s keeping us alive is our very dedicated soccer section. We have a whole slew of styles and we’re constantly getting new stuff too.”

Nearly half of Myrtle Sporting Goods’ entire back wall features dozens of top-shelf soccer cleats, and other assorted gear, which Deja claims is a hit with the many soccer fans in the area.

Aside from the soccer equipment, Deja says that the store has been moving a sizable amount of Yankees hats, as customers come just for their large selection of caps.

However, the most important aspect of the store to Deja, more than the rare Roberto Clemente jerseys or the fashionable Brooklyn Nets winter hats, is the connection it has with its customers, especially those who have shopped there for decades.

“People have come here with their kids and they say they remember when they were here as children too,” he said. “It’s tough in a major market like New York with all of the big chain stores. We have to provide what they can’t and that’s personality. We love providing trust and loyalty to people that come here.”

For shoppers looking to purchase a new suit or tie for their fashionable husband, father or son from a store with all of the same qualities of trust and loyalty, Domino Men’s Shop just down the block at 58-25 Myrtle Ave. can provide just that.

With over 100 years of experience of offering a wide range of male attire combined among the employees, store manager Manny Nicolosi believes that it’s the loyalty to their customers combined with that experience that draws people back.

“Grandfathers, fathers and sons all shop here,” Nicolosi said. “Here, we are family-oriented and we have a personal touch.”

Much like Myrtle Sporting Goods, Domino Men’s Shop has seen a decline in business this year because of the still-struggling economy.

To attract customers during the holiday season, Nicolosi says that they have several suits on sale and that they are selling quite well.

“We also do alterations right away,” added manager Gina Gurujan.

“I encourage people to shop here locally because we live locally,” Nicolosi said. “Everything is of good, quality craftsmanship too.”

When it comes to craftsmanship, do-it-yourself gifts have become popular as of late. Art Cove, an arts and crafts store at 60-09 Myrtle Ave. can be of help to those who would rather make a gift than simply buy one.

The 43-year-old business has sold well despite the economic conditions, something general manager Josh Simone says is a result of pride and a dedication to the generations of customers who have come through the doors.

“We take pride in our business,” Simone said. “We get people here with their kids and they say that they came here as kids as well.”

A relatively small store in terms of floor space, Art Cove nonetheless offers more than 10,000 items as the tall shelves extending over 10 feet high are packed from top to bottom with various arts and crafts items.

Simone says that part of the reason Art Cove has been able to withstand a slow economy with little impact on sales this Christmas is because of its successful website, and also because of its care for the community.

“If you’re looking for a wide selection of products for your arts and crafts needs and fantastic customer service,” he said, “this is your place.”

For those who want to impress their mother, wife or daughter with a fashionable bag or a new addition to her wardrobe, Moda Boutique at 60-25 Myrtle Ave. has a wide selection for sale.

Longtime owner Ayse, who did not provide her last name, borrowed money from a friend to start her business 21 years ago and now owns the building in which the store resides.

She says that, as it has with other area businesses, the fluctuating economy and increasing rents have made it harder to survive, but she has remained in business for a reason.

“People know us around here,” Ayse said. “We have good, quality items for sale.”

As the rain poured outside, Ayse groused at the lack of customers on the dreary Friday morning.

She did, however, reiterate the cost-cutting deals that holiday shoppers would receive when purchasing items ranging from blouses and jeans to jackets and handbags.

“We’re having a sale where everything is 15 percent off,” she said. “It will be like that until New Year’s Day.”

Much like other area small businesses, the familiarity factor reigns supreme inside Moda Boutique.

People who have lived in the neighborhood for years know of the best deals around as well as the best owners with the personalities that make customers feel like family.

“I survived 21 years here, I’m happy with that,” Ayse said. “We always try to help customers. I’m an honest person and that’s why people keep coming back.”