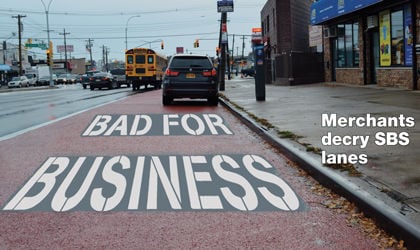 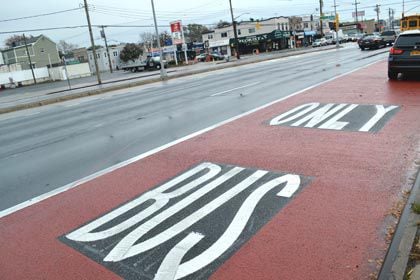 The Select Bus Service lanes along parts of Cross Bay Boulevard are not only causing a parking headache for some businesses, but at least one is seeing a significant drop in the number of people shopping there.

The Select Bus Service lanes along parts of Cross Bay Boulevard are not only causing a parking headache for some businesses, but at least one is seeing a significant drop in the number of people shopping there.

Rose, a manager at the C-Town Supermarket on Cross Bay Blvd. in Ozone Park, is usually busy helping her customers find what they’re looking for.

But lately, she’s been talking about the bus lanes right outside her business rather than what’s on sale.

“I was speaking to a customer just now about it,” said Rose, who didn’t want her last name published. “Nobody knows what to do right now. The customers are getting confused. They don’t know when they can park or when they’re going to get a ticket.”

Not only that, but the curbside bus lanes — installed as part of the Select Bus Service project for Woodhaven and Cross Bay boulevards — have led to a decline in the number of people shopping at the supermarket, located at 107-66 Cross Bay Blvd.

And that’s impacting the bottom line.

“I’d say about 20 percent since they were put in,” said Rose, referring to the store’s loss in business in the past few weeks.

The lanes, which stretch from Rockaway Boulevard to the Belt Parkway, kill curbside parking and standing from 7 to 10 a.m. and 4 to 7 p.m. Monday to Saturday.

“Most of my customers come here after 4 o’clock and now they can’t find parking,” Rose said. “And I don’t understand why it has to be on Saturday, too. Nobody is rushing to get into Manhattan on Saturday.”

C-Town isn’t the only business finding it difficult to acclimate to the newly redesigned Cross Bay Boulevard.

Roselle at A&J Stitching, located at 134-02 Cross Bay Blvd., told the Chronicle she too has seen her clients get frustrated with the bus-only lanes.

Roselle didn’t say if fewer people have been coming in since the lanes were installed — but she’s worried that could happen in the future.

“What if people decide not to come in anymore?” she said.

Rose, from C-Town, said she’s met with a Department of Transportation representative and a staffer from the office of Councilman Eric Ulrich (R-Ozone Park) about the issue.

“They said we could petition for more parking,” she said. “But where are they going to put it? There’s no parking on the side streets.”

State Sen. Joe Addabbo Jr. (D-Howard Beach) on Wednesday wrote a letter to DOT Commissioner Polly Trottenberg requesting the agency provide some relief to the businesses along the corridor.

A DOT spokesman acknowledged a request for comment but did not send one by press time.

Thomas Grech, executive director of the Queens Chamber of Commerce, said in an interview last month he was concerned what impact the lanes might have on the Cross Bay Boulevard stores.

“I’m fearful they’re going to lose a lot of business,” said Grech. “It’s going to be a huge problem, especially for some of the older people ... They’re going to need access to the stores.”

The Chronicle reported last month the businesses along the corridor were not notified that curbside parking would be restricted during rush hours.

Monday marked the official launch of the Woodhaven and Cross Bay SBS, the longest in the five boroughs.

MTA vehicles now travel along bus-only lanes for much of the corridor and commuters getting on from Park Lane South to the Liberty Avenue/Rockaway Boulevard corridor must wait on stops on the median between the main and service roads. Those getting on the Q52 and Q53 lines are now not using MetroCards to board — instead, they must purchase tickets at off-board machines.

The city insists this is the way to go.

“Woodhaven and Cross Bay Boulevard are critical roads in Queens — and from the Rockaways to Elmhurst, residents deserve this first-class service,” Mayor de Blasio said in a prepared statement. “Here in Queens, along a street that has been a Vision Zero Priority Corridor with far too many tragic crashes, we expect these changes to make a big difference.”

Another factor of SBS is that cameras will soon take photos of drivers using the bus lanes — motorists are only allowed in them to drop off or pick up a passenger, park when permitted or to make a right turn. The cameras will go into effect Sunday, Nov. 19 and for 60 days motorists will only be issued warnings. After that, they will be fined anywhere from $115 to $150. The times vehicles other than buses are allowed in the lanes vary. From Dry Harbor Road to Metropolitan Avenue, the lanes are now in effect 24/7 — they were previously only restricted to buses only during rush hour.

The curbside lanes from Union Turnpike to Myrtle Avenue are in effect from 7 a.m. to 7 p.m. Monday to Friday and the median bus lanes from Park Lane to Liberty/Rockaway are 24/7. Addabbo’s letter also requests the 24/7 lanes be changed to rush hour only.

There are no bus lanes on Cross Bay Boulevard south of the Belt Parkway.

The Mayor’s Office press release on SBS — which, in a break from the norm, did not include a quote from any elected officials representing the corridor — touted the endorsement of Stephanie Burgos-Veras, a community organizer with the Riders Alliance and a bus rider who grew up in Woodhaven.

“Tens of thousands of bus riders depend on the Woodhaven corridor every day, but they have been stuck on slow and unreliable buses for as long as anyone can remember,” Burgos-Veras said in the release. “Select Bus Service will make the bus a faster, more dependable option for thousands of Queens residents, helping connect people with jobs and educational opportunities. SBS is a step forward for Queens, and for long-suffering bus riders who are clamoring for better service.”

Several left turns have also been eliminated, such as at 101st Avenue and Union Turnpike, along Woodhaven and Cross Bay boulevards in an effort to improve the flow of traffic.

It's an absolute disaster. There is not one part of this plan that makes sense. All the negative consequences of this plan - which far, far outweigh the one positive (faster bus service) - were painfully obvious to see in advance for anyone with a brain. The idea that there is a safety component to this is a total farce. People will die running through traffic trying to catch a bus in those idiotic median bus stops. Also, as motorists now try to avoid the blvd and find alternatives on side streets it will be creating congestion and hazardous conditions on the side streets - putting lots of children, in particular, at risk. With all the parking lanes removed, businesses will be closing left and right resulting in substantial job losses. I'm generally a fan of Councilman Ulrich, however, I'm shocked he supported this. A real misstep. It's terrible when elected officials completely ignore the will of the people such as in this case. This plan was overwhelmingly rejected by all communities along the Woodhaven/Cross Bay blvd corridor. So for it to go ahead anyway is representative of everything that's wrong with government.

Editor's note: Councilman Ulrich formerly supported the Select Bus Service plan but changed positions and announced his opposition to it some time in 2016.

There has been enough lying from the DeBlasio Administration, DOT Commissioner Trottenberg and Queens DOT Commissioner Garcia about the potential benefits of this plan for SBS and what we are seeing now is what most of us who were paying attention believed from the beginning. This was a nightmare in the making.

As a resident of Woodhaven, a commuter and automotive owner, I believe that Commissioners Trottenberg and Garcia should be held accountable for this avoidable mess. They should do the proper thing and resign, and let someone else patch together a short-term fix until the next can come in and reverse this mess. Unlike the Riders Alliance people- we live here and can wait until it is fixed. They can move on and screw up the next community in their cross-hairs.

Even with more SBS routes that will be implemented by both the city and the MTA during the next several years, overall bus ridership continues to go down, down and down: The rise of ride-hailing app services, gridlock, fare evasion and dollar vans are the main contributing cases of all of this. [tongue]