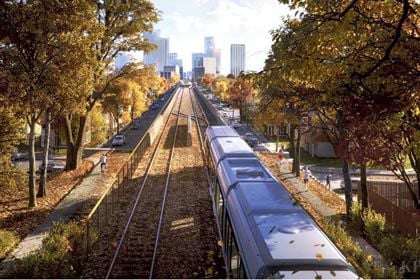 Former Councilwoman Elizabeth Crowley spent her last two years in offi ce drumming up support for her plan to reactivate passenger rail service along the Lower Montauk branch between Jamaica and Long Island City. A year-long study of the idea, conducted by AECOM and released this week, said the proposal is physically feasible. But adding commuter service while maintaining freight hauling operations would cost more than $2 billion. 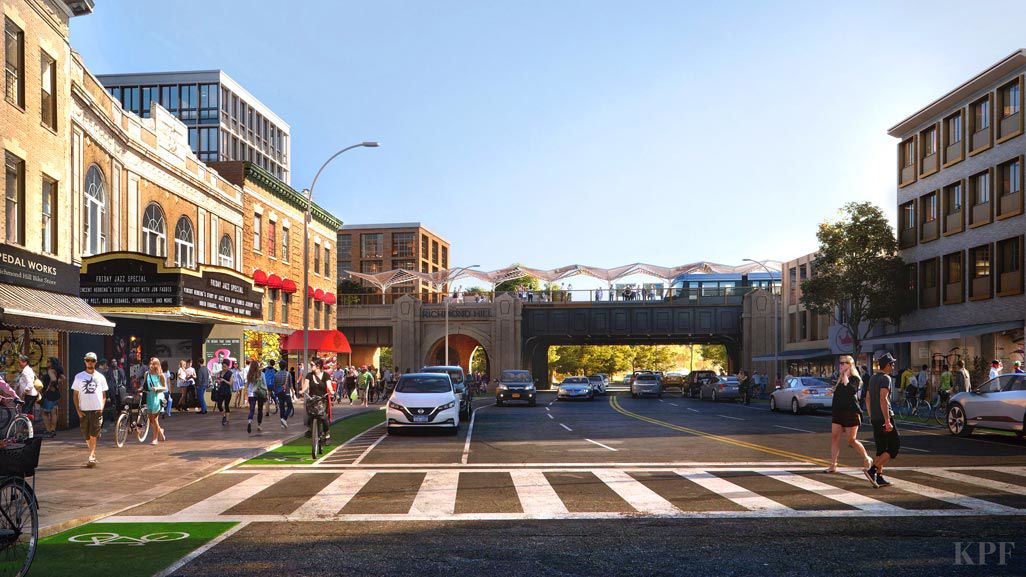 The Richmond Hill station along the QNS Rail line, as proposed by former Councilwoman Elizabeth Crowley.

Former Councilwoman Elizabeth Crowley spent her last two years in offi ce drumming up support for her plan to reactivate passenger rail service along the Lower Montauk branch between Jamaica and Long Island City. A year-long study of the idea, conducted by AECOM and released this week, said the proposal is physically feasible. But adding commuter service while maintaining freight hauling operations would cost more than $2 billion.

The Richmond Hill station along the QNS Rail line, as proposed by former Councilwoman Elizabeth Crowley.

The reactivation of commuter light rail service along the Lower Montauk line between Jamaica and Long Island City is feasible but costly, according to a highly anticipated study released by the engineering firm AECOM.

The proposal is the brainchild of former Councilwoman Elizabeth Crowley, who spent her final two years in office garnering support from area community boards and fellow government colleagues for it.

She told the Chronicle on Tuesday that she is “thrilled” by the study’s results, saying it will yield tremendous benefits to those from Richmond Hill to Glendale to Maspeth.

The 289-page document — commissioned by the Department of Transportation at Crowley’s request last year — touches on the QNS Rail’s feasibility, potential ridership figures and, most importantly, a possible price tag of more than $2 billion.

Quite simply, passenger and freight service can coexist on the right-of-way, but not before multiple obstacles are cleared.

And of the half-dozen train models studied by AECOM, only heavy-duty “diesel multiple units” — nontraditional diesel locomotives that feature an engine in each car — make sense. Electric trains were considered by the firm. But for such a model to be used, an electrified third rail would have to be installed at a cost of more than $50 million.

“DMUs have the advantage of using diesel but often without the same level of noise pollution as a diesel locomotive,” the study reads, “and they do not require electric infrastructure such as a third rail.”

Second, a number of area bridges along the line would have to be either torn down and rebuilt or significantly renovated.

The most obvious candidate for replacement, according to AECOM, is the Dutch Kills railroad bridge in Long Island City.

The 120-year-old structure used to be able to swing open to allow ships to pass undernearth, but it malfunctioned 30 years ago and has been locked into position ever since

That bridge only has one track on it, and two would be needed to allow passenger service to operate. But AECOM said demolishing and replacing the bridge complete with two tracks is a necessary move regardless.

The railroad crossings above Grand and Flushing avenues in Maspeth may also have to be replaced with ones that contain a necessary extra set of tracks.

Of the 10 former passenger stations along the line, excluding the existing Jamaica and Long Island City termini, AECOM suggests that 8 of them are still viable stops.

From west to east, they include:

• Haberman, at the corner of 49th Street and 56th Road in Maspeth;

• Grand Avenue-Flushing Avenue in Maspeth, between the two roads on Rust Street;

• The Metro Mall in Middle Village;

• The Shops at Atlas Park in Glendale;

• Woodhaven Boulevard, just north of Union Turnpike in Glendale; and

• Richmond Hill, on Lefferts Boulevard between Hillside and Jamaica avenues.

“The stations would be expected to develop and drive growth in the residential, commercial, or industrial sectors,” the study reads. “In most instances, the station may have a transformative impact on an area that did not have direct access to rail service.”

According to the firm, passenger rail trains would run between 5 a.m. and 10 p.m. seven days a week. Freight hauling would occur between 10 p.m. and 5 a.m., as well as intermittently during the midday.

Peak weekday travel times, identified as 6 to 10 a.m. and 4 to 8 p.m., would see commuter trains arrive every six minutes.

Ridership: then and now

Passenger service along the line was discontinued in 1998 after years of extremely low ridership.

But the area has seen a modest growth in population, with approximately 180,000 people — including 87,000 members of the work force — now living nearby.

Of those 87,000, 56 percent commute to work via public transportation and 27 percent drive to work. They combine for an average commute time of 40 minutes.

Because of the population boom and a relative lack of public transportation options AECOM estimates that annual ridership in 2025 — the first year service could realistically open — will hover around 5,820,000.

That total is about 800,000 more than that of the Staten Island Railroad — which has 11 more stations.

When it comes to average daily ridership, the Richmond Hill station is expected to be the busiest with 5,200 users. The firm anticipates that around 3,500 people per day would use the 80th Street and Metro Mall stops, while about 2,000 people would get on trains at Jamaica, Fresh Pond and Long Island City.

Getting down to dollars

AECOM estimates that the cost of reactivating passenger rail service on the branch, while also maintaining freight operations, would cost upwards of $2.16 billion — less than half the cost of the recently opened three-station Second Avenue Subway line.

Of that total, $914 million would be for renovating and replacing existing infrastructure to handle passenger service while $150 million would go toward buying 15 one- or two-car trains. Should freight service be eliminated entirely, passenger rail reactivation would cost $1.1 billion.

When it comes to the cost of a ride, AECOM said charging a commuter the same price as a Metrocard swipe would make the most sense, as fares comparable to the LIRR or Metro-North could see anticipated ridership tumble as much as 40 percent.

Revenue derived solely from ticket purchases are expected to hover around $15 million per year, while annual operating costs would be around $55 million.

Community Board 5 District Manager Gary Giordano told the Chronicle on Tuesday that while he sides with Crowley on needing to create more transportation options, he thinks the idea is too costly.

“These projections for how many riders there would be, it’s just too expensive — from what I’m reading — to justify it,” Giordano said. “The estimation alone for annual revenue versus annual operating cost is very significant.”

Other ways AECOM said the project could be funded include federal grants, the selling of approximately $480 million in air rights along the line and up to $309 million in tax increment financing.

Crowley told the Chronicle she always thought the plan was feasible, adding that she was happy to hear she was right.

“The people who live along the right-of-way live in a transit desert and spend too much time commuting every day,” she said. “That’s unnecessary. The line is like a highway you’re not allowed to drive on.”

The former lawmaker also said the estimated ridership numbers prove the project would be worth it financially, adding that there are “a lot of other ways” to bring in revenue besides just ticket purchases.

“That is in line with major investments that have happened before,” she said, “and it certainly exceeds the ridership numbers of other similar projects in the country.”

While Crowley said she misses her job as a Council member, a silver lining is that she can dedicate more hours to projects she’s passionate about.

And with her newfound time, she said she is going to advocate fiercely in favor of the plan to anyone who will listen.

“We’re facing such hardship right now. We’ve never had our fair share,” Crowley said. “We have an opportunity now to discuss what’s real and what’s fair.

“The L and the E, which are a few miles north and south of the district, both of them are operating beyond capacity,” she added. “We need more help in this part of the city.”

Holden held the opposite opinion, saying in a statement he thinks the study — which cost $500,000 from the Council Speaker’s Office — proves the project is pointless.

“This study was a colossal waste of money that could have otherwise been used to benefit my district,” Holden said. “Instead, those tax dollars went to fund a study for a project that is both infeasible and undesirable.”

According to AECOM, the future of the light rail is entirely up to the policy makers and city and state agencies. Holden said he doesn’t think there is a future, adding that Crowley’s pushing for the study “shows a complete lack of understanding of the community and its transportation needs.”

“I could say I’d like to derail it, but it’s a train that never really left the station,” he said. “The light rail plan is a non-starter, and the study was a waste of taxpayer dollars.”

Crowley shot back, saying that’s not at all the feeling she got when shopping her idea across Queens.

“It’s unfortunate that Mr. Holden cannot see the value in this study, but his colleagues in the City Council do, as well as the community boards neighboring the rail, who overwhelmingly endorsed it,” she said. “Thousands of residents across the borough see value in better mass transit, shorter commute times, and less traffic clogging our streets.”