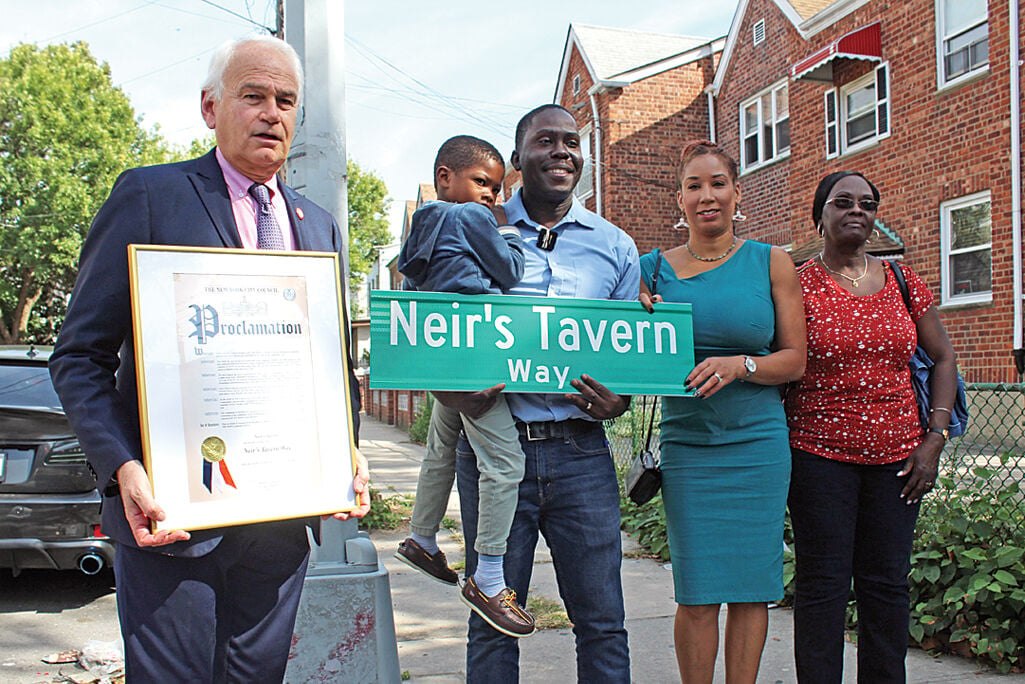 The 192-year-old Neir’s Tavern was honored with a street co-naming at the corner of 78th Street and 88th Avenue. Councilman Bob Holden sponsored the event and Neir’s owner Loycent Gordon unveiled the street sign with his son, Evan, his wife, Aisha, and his mom, Doris Bredwood. 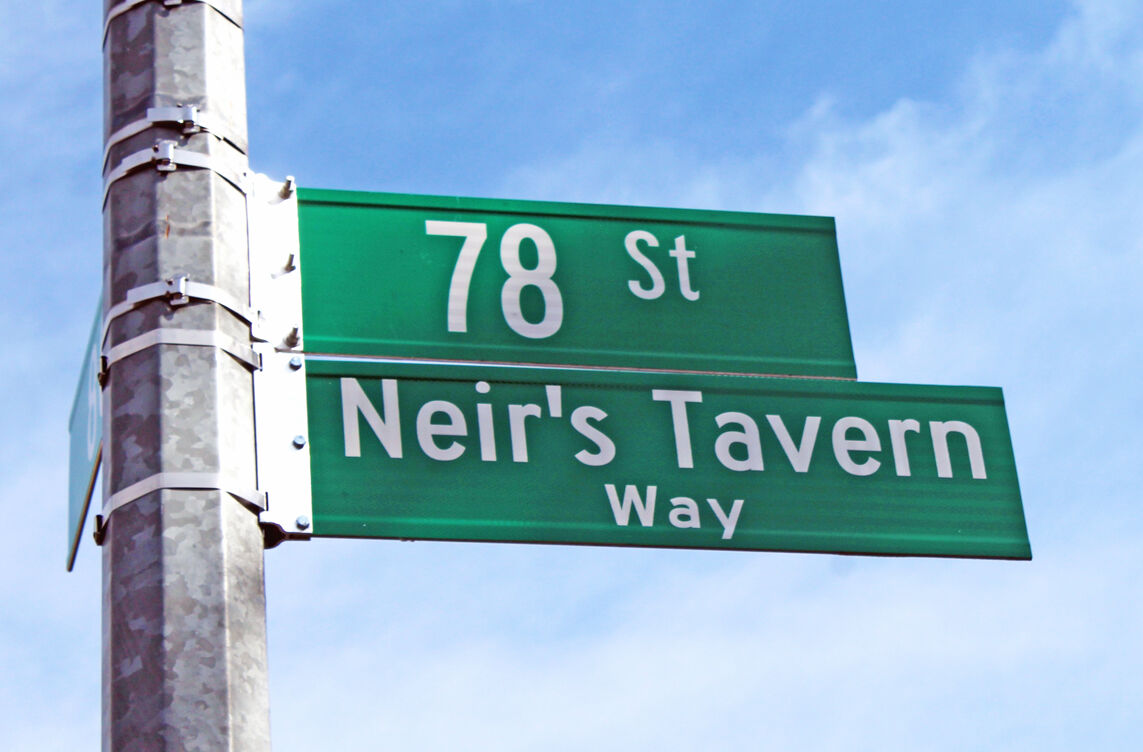 Loycent Gordon, owner of Neir’s Tavern in Woodhaven, unveiled the new street sign honoring the 192-year-old bar. He is pictued with his son, Evan, and wife, Aisha. 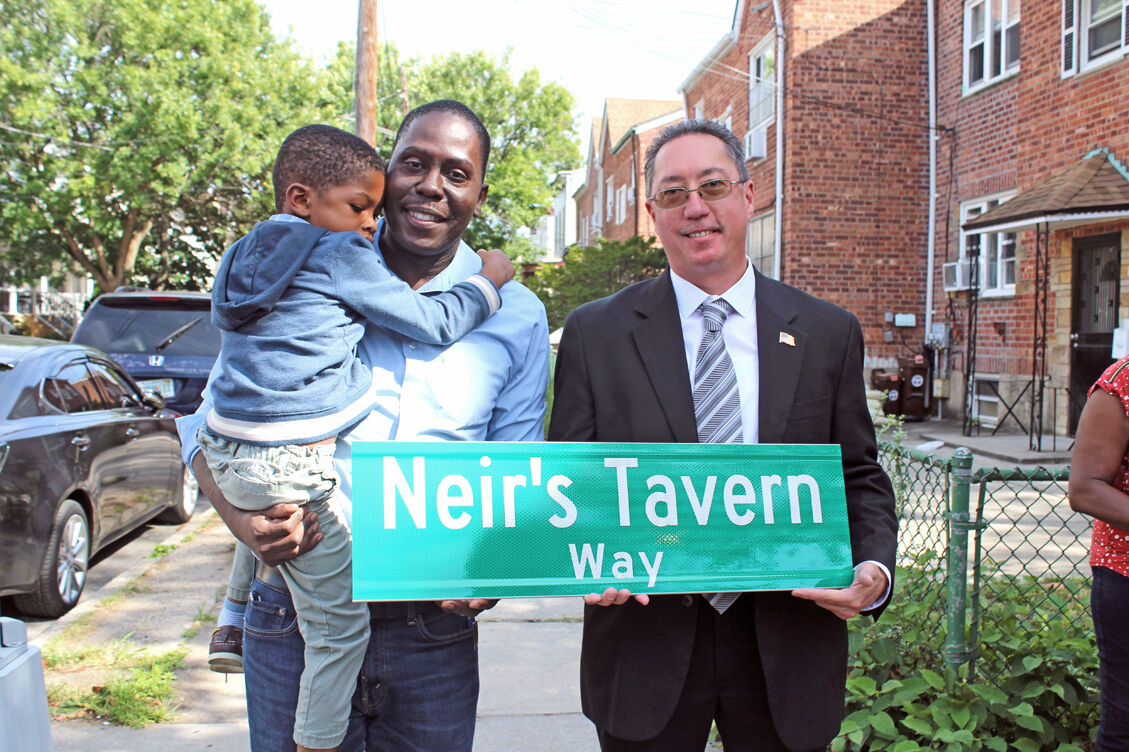 Loycent Gordon with his son, Evan, and Kenichi Wilson. 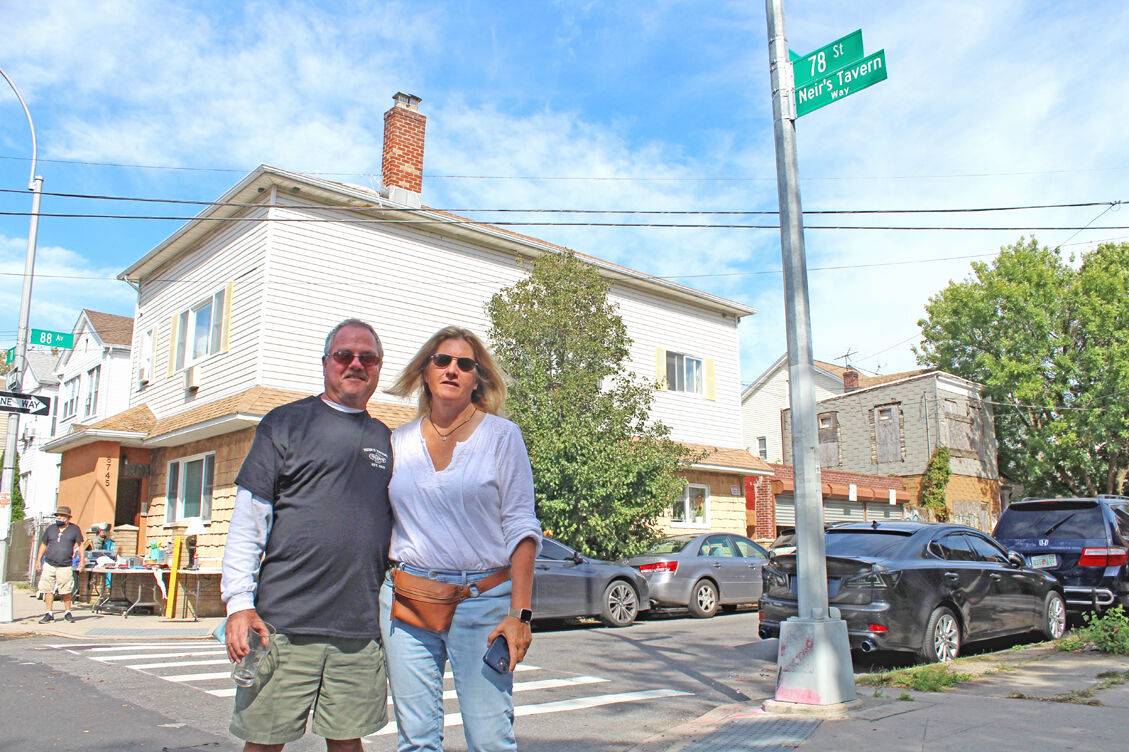 Kenny and Christine Goddard, right, who are regular patrons at Neir’s.

The 192-year-old Neir’s Tavern was honored with a street co-naming at the corner of 78th Street and 88th Avenue. Councilman Bob Holden sponsored the event and Neir’s owner Loycent Gordon unveiled the street sign with his son, Evan, his wife, Aisha, and his mom, Doris Bredwood.

Loycent Gordon, owner of Neir’s Tavern in Woodhaven, unveiled the new street sign honoring the 192-year-old bar. He is pictued with his son, Evan, and wife, Aisha.

Loycent Gordon with his son, Evan, and Kenichi Wilson.

Kenny and Christine Goddard, right, who are regular patrons at Neir’s.

The 192-year-old Neir’s Tavern will now be permanently commemorated with last weekend’s co-naming of the intersection opposite the bar. Community members, local officials and members of the private NEIRS200 group gathered on Saturday for the unveiling of Neir’s Tavern Way, at the corner of 78th Street and 88th Avenue in Woodhaven.

“It’s nice to know that it wasn’t all for nothing. This shows that we did something here,” said owner Loycent Gordon, who pulled the rope to unveil the street sign with help from his wife, mother and son.

The event was delayed for the past 10 months because of the pandemic, said Gordon, but his investment in the beloved watering hole extends back over a decade, with what he was initially told would be a “bad business decision.”

“These past 12 years, my heart and my passion has been trying to contribute something of significance to a city and a country that has given me so much as an immigrant from a little island called Jamaica,” said Gordon.

Gordon, an active FDNY firefighter, has owned the historic bar since 2009 and is credited for bringing the name “Neir’s” back, honoring the family that bought it in 1898, explained Ed Wendell, president of the Woodhaven Historical Society.

Neir’s is one of the oldest and most historic continuously operating taverns in the country, retaining much of its original character including a tap system that still uses ice to serve cold beers. The films “GoodFellas” and “Tower Heist” were filmed at Neir’s and it is argued that Mae West performed there early in her career.

Wendell described the bar as a mainstay since before the Civil War, through the time of the bygone Union Course Racetrack, which held its first race 200 years ago this month, surviving the cyclone of 1895 and the stock market crash of 1929.

Neir’s narrowly survived the Covid-19 pandemic and was also rescued when a “handshake deal” was brokered among city officials including Mayor de Blasio and Councilman Bob Holden (D-Middle Village). They prevented a twofold increase in rent, keeping the bar afloat.

“Since 1829 this has been the center of Woodhaven and way before we were all around, this was a meeting place revered by Woodhaven,” said Holden.

Assemblywoman Jenifer Rajkumar (D-Woodhaven) described how people often bring up Neir’s when she mentions that Woodhaven is her district.

“Neir’s is one of the historical landmarks that really puts us on the map,” said Rajkumar. “This really is a cornerstone of our community.”

Today, Neir’s offerings go beyond burgers and beers, with a volunteer group called NEIRS200, which contributes ideas for the full recovery of the tavern, working to ensure it makes it to 200 years old. There is also a membership-based ambassadors group that provides financial support and helps promote community events and causes. Elected officials lauded Neir’s for giving back during the pandemic.

Christine Goddard grew up near 91st Avenue in Woodhaven in the 1970s and her aunt lived next door to Neir’s. Her father, a former fire chief, would go to the bar in the afternoon. She lives in Breezy Point now but she and her husband, Kenny, visit the pub often. “It’s a real special place for us. When I want to feel close to my parents, I don’t go to the cemetery, I come here,” she said. “I can still see them sitting at the bar.” Back in the 1970s, her mother sent a set of encyclopedias to the bar to help settle arguments about facts among patrons. They are still there today.

As for what is next for Neir’s, Gordon hopes the ambassadors club can help figure out a way for Neir’s to own the building and not be subject to rent increases.

In the meantime, Neir’s Taven Way may be neighbored by a street co-named for the Union Course Racetrack, which Councilman Holden said is “in the works now.”