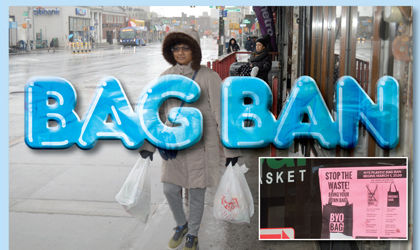 In an effort to reduce plastic waste and become more environmentally conscious, the state is mandating a ban on most thin plastic bags in most stores effective March 1. 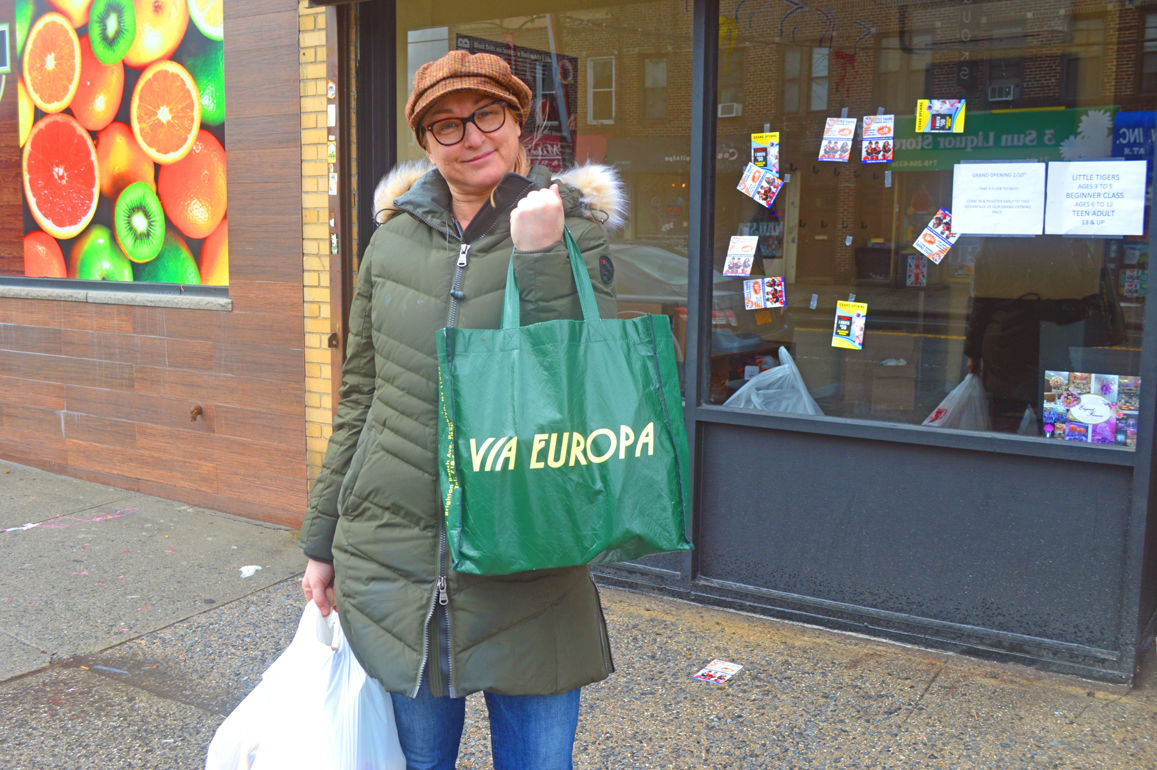 Olga Shtatlender of Forest Hills usually has more than one reusable bag when shopping, but circumstances forced her to settle for some plastic bags last week. 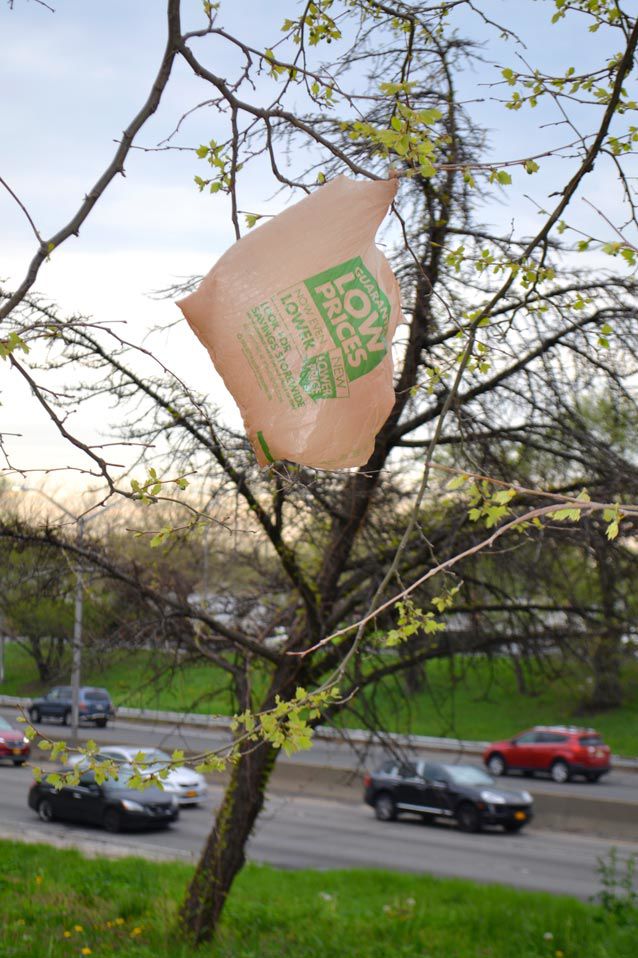 After blocking a 2017 city plan to slash the availability of “single-use” plastic store bags like this one blowin’ in the wind, the state enacted a law banning them in nearly all cases. The measure takes effect March 1.

In an effort to reduce plastic waste and become more environmentally conscious, the state is mandating a ban on most thin plastic bags in most stores effective March 1.

Olga Shtatlender of Forest Hills usually has more than one reusable bag when shopping, but circumstances forced her to settle for some plastic bags last week.

After blocking a 2017 city plan to slash the availability of “single-use” plastic store bags like this one blowin’ in the wind, the state enacted a law banning them in nearly all cases. The measure takes effect March 1.

In the city, that means grocery stores, bodegas, hardware stores and just about any other retailer where one had carried out merchandise can now charge 5 cents for paper bags unless customers bring their own, or they can give them away.

At the Hempstead South Deli Corp. in Queens Village last Friday, the owner, who gave his name only as Ali, said he had some serious reservations — and concerns for his bottom line, particularly if he needs to absorb the cost of paper bags.

“I don’t know,” he said when asked about how it might affect his customers and business. “I can’t have plastic bags. If I have paper and I charge them for it, maybe they go somewhere else. Maybe it starts a fight.”

But some shoppers braving the day’s rain welcomed the change.

“I don’t like the plastic bags,” Edulio Morales of Jamaica told the Chronicle as he left the Ideal Food Basket market in Jamaica, pointing to the small bags filling his cart. “I’m ready for the ban. I have my own big bags at home.”

Olga Shtatlender of Forest Hills also favors the ban for environmental reasons. She left Vitelio’s Marketplace Yellowstone on Friday with a few of the store’s plastic bags augmenting a large, reusable sack, one of several she said she usually has with her on trips to the market.

“I only had the one with me because I wasn’t planning to go shopping,” she said. “And when I do get the plastic bags, I always reuse them for something.”

Not all plastic bags are banned. Shoppers buying meat, fish and produce, for example, can still get plastic. Customers using SNAP or WIC benefits are exempt from any per-paper bag charge.

The aim of the ban is to have residents bring their own reusable bags, whether they be made of cloth, heavy-duty plastic or something in between, thus eliminating as much as possible the thin plastic film bags that get stuck in trees, storm drains and eventually, if disposed of, landfills.

The ban has a brief but eventful history in the city.

The City Council had passed a 5-cent fee that was set to go into effect in February 2017 before Gov. Cuomo and the state Legislature stepped in at the last minute, with Cuomo creating a task force to examine a statewide ban. The new law was passed as part of last year’s state budget plan.

The City of Long Beach, LI, and Suffolk County are among the municipalities and counties in the state that have their own bans already in place.

The National Supermarket Association is a trade organization that represents about 400 stores on the Eastern Seaboard between New York City and Florida. All are independently owned.

Speaking to the Chronicle from the group’s Whitestone headquarters on Monday, Executive Director Elizabeth Peralta said the group is taking a multipronged approach.

“We’re trying to find the best solutions for our owners,” Peralta said.

She said first that paper bags are not considered ideal, as they can promote the breeding and transfer of roaches.

“That creates a different problem,” she said.

The association is still awaiting final criteria from the state for reusable bags that can be offered by its members. She said that any bag offered for sale to customers by retailers must be washable and durable enough for at least 125 reuses. Beyond that the trade group is waiting for advice on materials and composition requirements.

“Our members’ stores are all independently owned, so they have to pay any costs,” she said.

Peralta said the organization is investigating the possibility of teaming with bag manufacturers and sponsors to create reusable bags for their members that could be given away for their customers’ repeated use or sold in the stores at a nominal price.

The Chronicle reached out to a number of local and national retail chains to see how the ban is impacting them.

The only response came from 7-Eleven, which said all its stores are operated by independent franchise owners who are required in their agreements to obey all federal, state and local laws.

We are going to be able to pay for paper bags. I only hope that those bags are made from quickly-renewable bamboo, because cutting down all those trees to make paper bags is also extremely toxic to the environment.

WHY should customers be nickel & dimed to death with an extra charge for paper bags?

This is an outright gift for store owners, who no longer provide free bags for their merchandise, and a regressive tax on those who can’t afford to have everything delivered to their door.

I wonder if these out-of-touch legislators ever go shopping? Do they think that shoppers have developed pouches, likes kangaroos, to carry around all day long?

We must demand that other retailers do the same, until the nickel charge for paper bags is repealed (hint- call and email your state legistators).

If stores do not provide free paper bags they will lose business, which in today’s online economy they cannot afford to do.

I will not patronize stores who “leave us holding the bag” - by charging for paper bags.

I went to the new tourist trap- The Vessel at the Hudson yards sometimes over the summer. There was a lady in front of me who was pissed off after making a purchase in MUJI ( a Japanese store selling everything from pens to furniture) and she was mad because she had to pay for a plastic bag 5cents. I think people will be on one of two boats on this issue- they will be upset thinking great here's another way to take more money from me. Or they will understand this issue for what it is- that plastic bags are not sustainable! Rather than see it as a punishment- know that now you have to take matters into your own hands and when you go shopping be more mindful and bring bags. I remember when this first happened to me - it was after shopping in IKEA and I would pay for the bags- then eventually they had no bags. In the end - if you think about it its about consumerism and hey who told you to go shopping /online shopping anyway?

The coronavirus is having a worse impact on Chinese business owners than the plastic ban ever will. Trust me- people will still go shopping [beam]