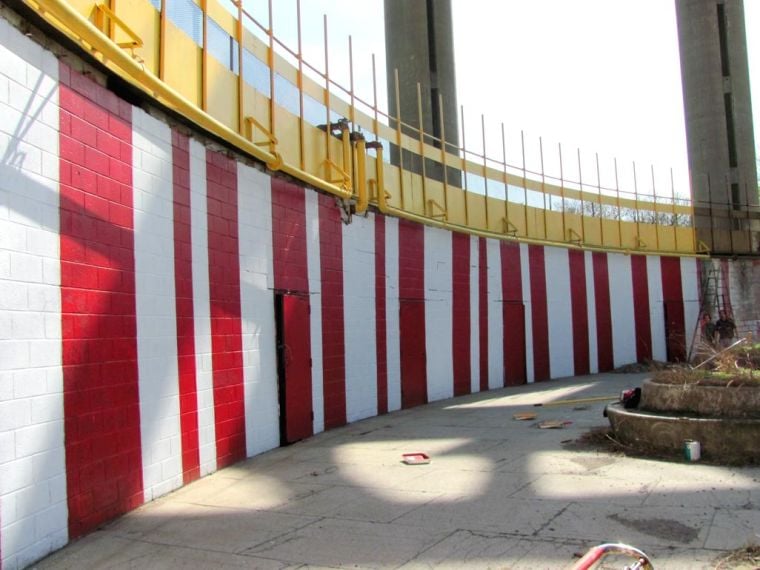 The fresh paint covering some of the State Pavilion’s interior is just the start of bigger plans to celebrate the World’s Fair’s 50th Anniversary. 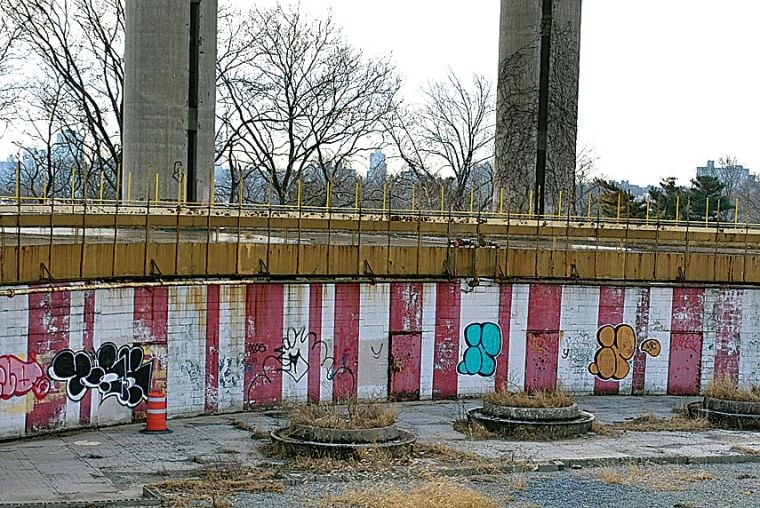 The graffiti that originally lined the State Pavilion last winter.

The fresh paint covering some of the State Pavilion’s interior is just the start of bigger plans to celebrate the World’s Fair’s 50th Anniversary.

The graffiti that originally lined the State Pavilion last winter.

The graffiti that once lined the interior of the New York State Pavilion in Flushing Meadows Corona Park is slowly becoming a thing of the past, as a crew of preservationists spent last weekend giving the historic site a fresh coat of candy striping.

Armed with 18 gallons of red, white and yellow paint, a crew of five World’s Fair aficionados repainted a sizeable portion of the pavilion’s rotunda.

“So far so good” was Mitch Silverstein’s assessment on Monday, after turning in a workman’s 9 a.m.-to-5 p.m. Friday through Sunday at the Flushing Meadows landmark.

The gang, which besides Silverstein included World’s Fair enthusiasts Jim Brown, Ed Gosset and Stephanie Bohn, painted the portion of the rotunda that’s visible from the gate — a carefully engineered optical illusion to give the appearance that the whole interior is cared for.

The unpainted portions that remain out of sight from the general public will also be touched up during the coming weekends, Silverstein said.

The efforts began after graffiti was discovered along the pavilion’s interior. Over a dozen “tags” lined the World’s Fair landmark, with bubble letters in various shades set at 6- to 10-foot intervals. The adjacent towers that supported what is left of the “Tent of Tomorrow” also have sporadic scrawls.

The vandalism frustrated Silverstein, Queens native John Piro and others, who planned on spiffing up the pavilion ahead of the 1964 World’s Fair’s 50th Anniversary.

The Parks Department power-washed the graffiti off the walls, but stripped some of the underlying white and red paint.

No worries, according to Silverstein. The bare concrete may have left the walls more porous and absorbent, but not to the detriment of rejuvenation efforts. Still, the interior poses unique challenges for the crew.

A sprinkler system was installed after the World’s Fair, with pipes jutting out of the interior, making the upper steel ring more difficult to paint.

The project is being funded mostly by the generosity of strangers, with funds coming from donations made through the group’s website, gofundme.com/1se3vg.

They had generated 70 percent of their $2,500 goal as of this writing, allotting a majority of the funds for the 45 gallons of paint needed to spruce up the entire interior.

As for their World’s Fair 50th Anniversary plans? Silverstein was mum.

“We’re kicking around ideas, nothing we want to declare publicly yet,” he said, making an allusion to a planned Major League Soccer stadium and United States Tennis Association expansion, both slated to begin around the anniversary. “The park is going to be under siege with construction projects at the time.”