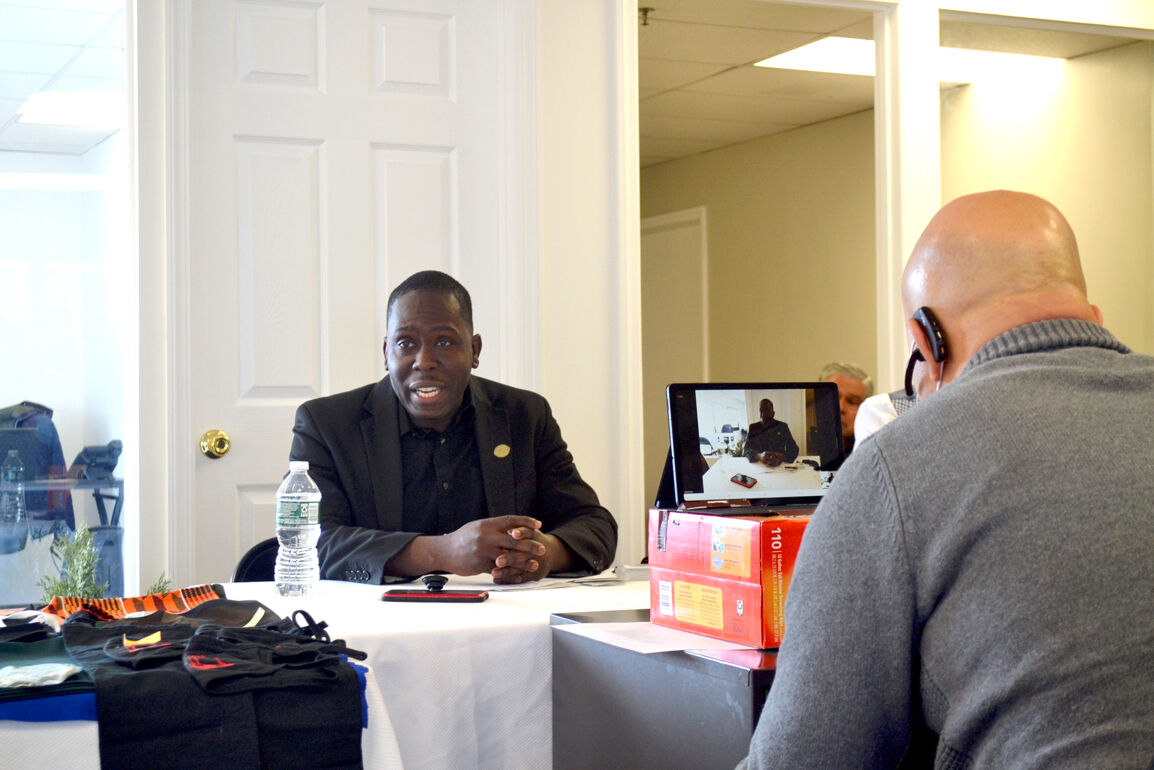 Loycent Gordon, owner of Neir’s Tavern, speaks of the bond between small businesses and the community on a Zoom meeting hosted by the National Small Business Chamber of Commerce last Saturday. 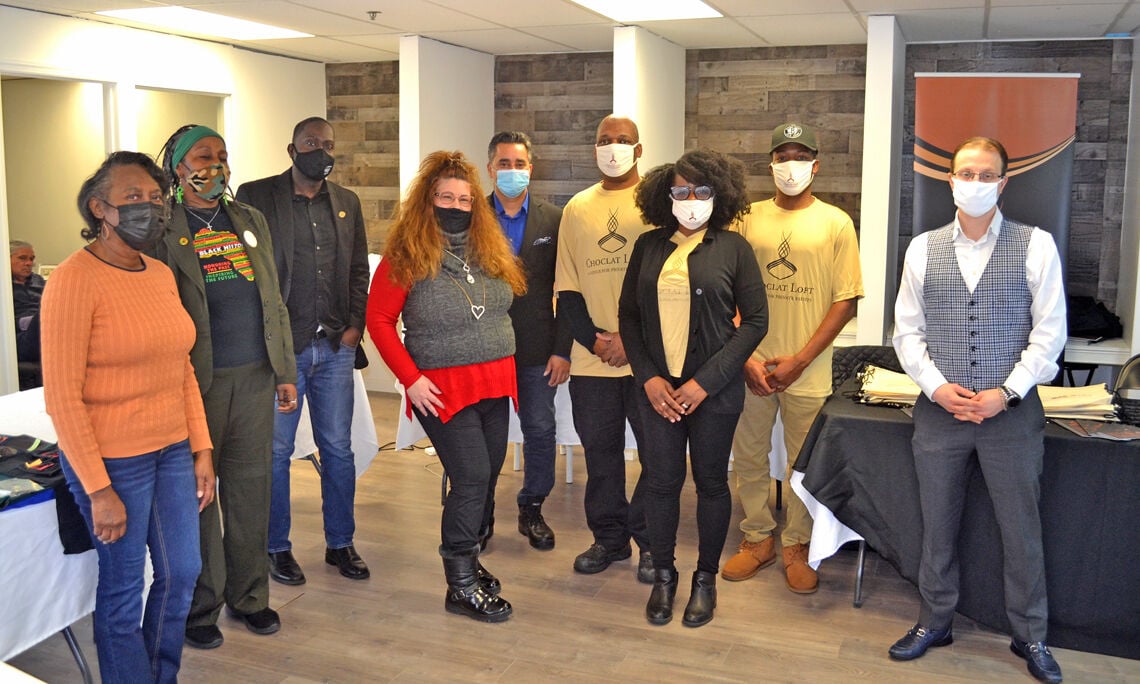 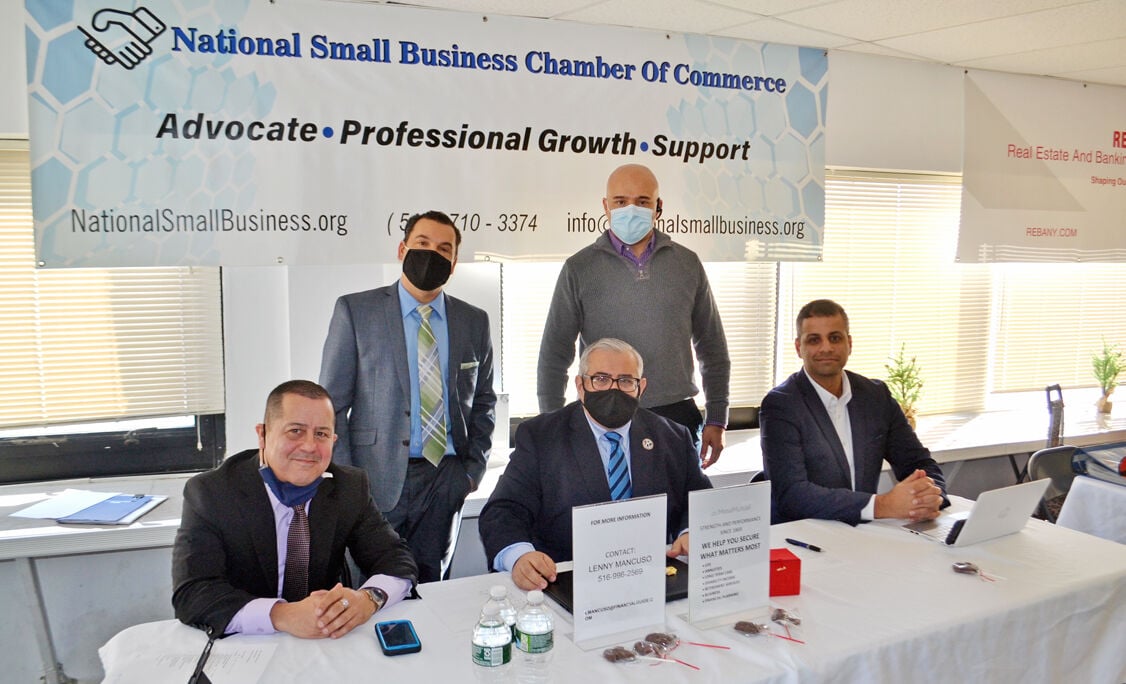 Todd Miranda of the National Small Business Chamber of Commerce, left, Erik Swensen, Lenny Mancuso, Eddie Sultan and Umair Zaman ran the conference on cultivating the relationship between small businesses and the community.

Loycent Gordon, owner of Neir’s Tavern, speaks of the bond between small businesses and the community on a Zoom meeting hosted by the National Small Business Chamber of Commerce last Saturday.

Todd Miranda of the National Small Business Chamber of Commerce, left, Erik Swensen, Lenny Mancuso, Eddie Sultan and Umair Zaman ran the conference on cultivating the relationship between small businesses and the community.

A gathering of Queens businesses owners in Floral Park last Saturday was billed as a celebration of Black History Month.

But it also was intended as a clarion call for small businesses and the community to pull together in challenging times that still could be far from over.

The Chronicle teamed up with the National Small Business Chamber of Commerce for the event, which went out on Zoom, with Todd Miranda and Erik Swensen of the NSBCC and Queens Chronicle Account Executive Ree Brinn serving as hosts.

Mickey King, the second-generation owner of Antun’s, has served generations of Queens residents. He said small businessed need their loyal customers now more than ever in the time of Covid-19.

“It’s been 11 months,” King said of state-imposed closures and reduced capacity. “We want our customers to come back, and they want to come back ... We normally employ more than 100 people.”

King said even some people who want to come back are canceling or delaying because of restrictions on things like dancing at wedding receptions. He said people can help by pushing their elected representatives to seek more reasonable conditions.

“We’ve known from the beginning it wasn’t restaurants causing the spread,” he said. “Restaurants know how to do this safely. We’ve been keeping our customers safe for 45 years. We take safety courses. It’s what we do.”

Loycent Gordon, owner of Neir’s Tavern for 12 of its 191-year existence and a lieutenant with the FDNY, told the Zoom audience that he has learned to have faith in the idea of community.

“How many of you remember your first day in fourth grade?” Gordon asked, referring to his first day in school after his family immigrated from Jamaica. He was embarrassed when his teacher asked him to write his unusual first name on the board for his classmates.

“They realized I could not read or write,” Gordon said. “But everyone in the school community, the teachers, the janitors, everyone worked to teach me.” That same community, he said, soon would applaud him “when I walked across the stage as valedictorian. And I became the first black HazMat lieutenant in the Fire Department, or one of the first.”

“When I bought Nier’s, I knew nothing about the restaurant business,” he said. “I wanted to repay the community that had helped me.”

It has been on the verge of closing a few times, most recently last year, when a friend told a friend who told a friend. Among the results was a grant from the city for small businesses.

Like King, Gordon said small businesses will be relying on the community much as he has had to overcome obstacles that bigger businesses don’t have or can afford to weather. He referred to both a maga-monolith restaurant, and Charles and Patricia Rogers, off to his left, who opened Chocolat Loft less than two years ago.

“We can’t do two burgers for $3 like McDonald’s,” Gordon said. “But McDonald’s can’t buy the relationship we have with our community ... I’m looking forward to our bicentennial. I don’t know if we’ll get there. But we also need to see how we can help Chocolat Loft get there, how to make them a generational business.”