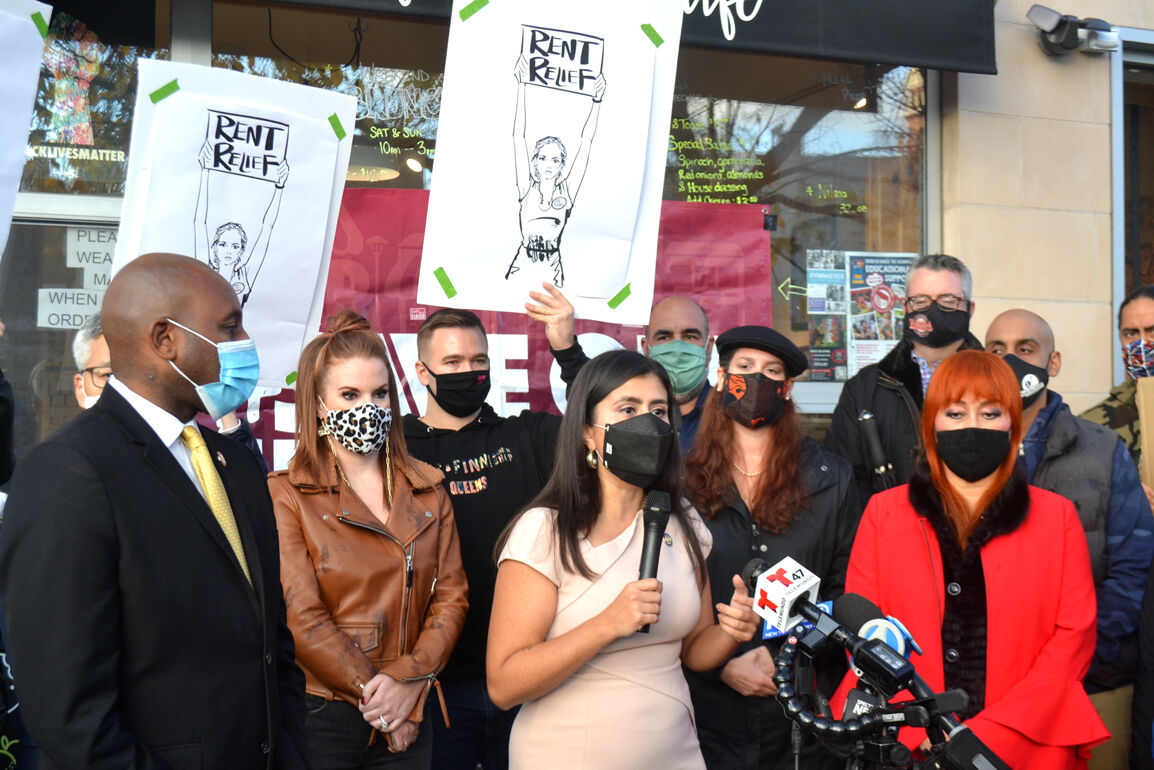 State Sen. Jessica Ramos speaks at a rally held last Friday in Long Island City for small business owners seeking support from government as the coronavirus and the response to it keep them down. Among those present were Borough President-elect Donovan Richards, left; Rebecca Trent, in beret, who just closed her popular club The Creek & The Cave; and Korean-American activist Christine Colligan, in red. 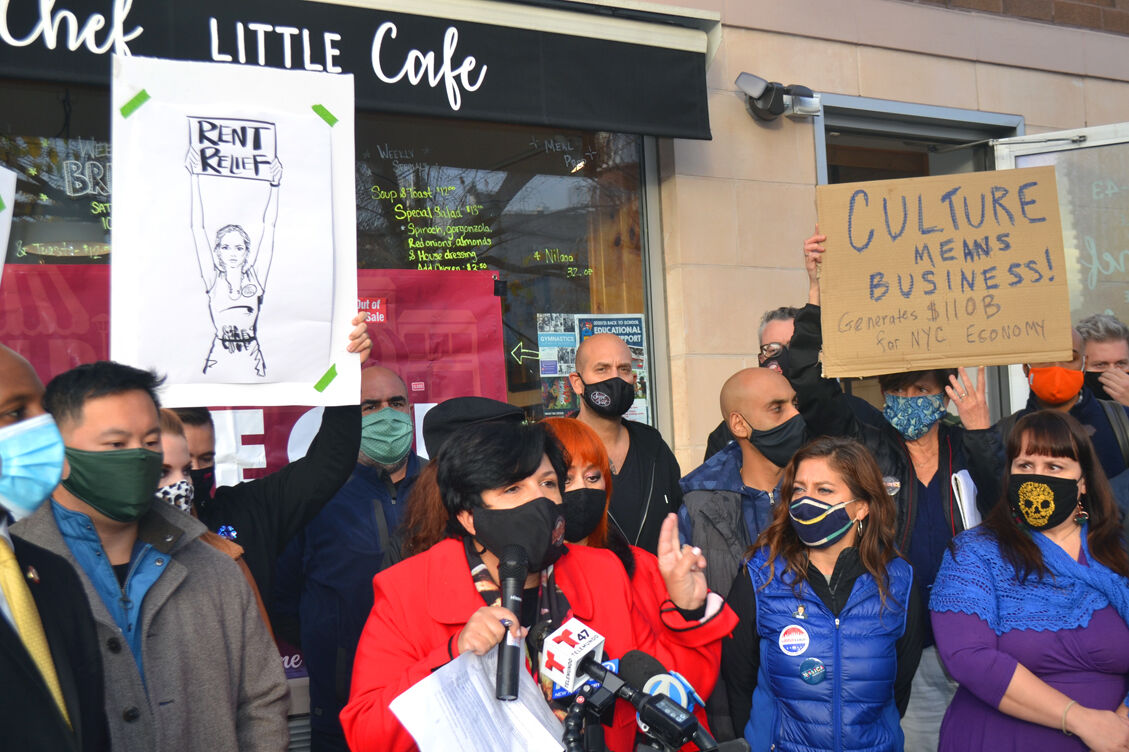 State Sen. Jessica Ramos speaks at a rally held last Friday in Long Island City for small business owners seeking support from government as the coronavirus and the response to it keep them down. Among those present were Borough President-elect Donovan Richards, left; Rebecca Trent, in beret, who just closed her popular club The Creek & The Cave; and Korean-American activist Christine Colligan, in red.

Western Queens small business leaders and elected officials rallied last Friday in Long Island City, asking the state for a specific plan to help guide them through the pandemic.

“Why did the cruise lines and the airlines get support and relief when they were asked to close and all of us that run businesses in this fine state of New York cannot get somebody to sit down, make a plan and give us some financial relief?” said Roseann McSorley, who owns Katch Astoria with her husband.

McSorley, calling the situation a “crisis,” has brought back 12 of the 40 workers she employed and said with 20 percent unemployment many people will struggle to have food for Thanksgiving.

Councilman Donovan Richards (D-Laurelton) criticized the city for giving more than 50 percent of small business relief grants to companies in Manhattan. “Manhattan is no longer the epicenter of New York City,” the borough president-elect said. “We are seeing more growth in the outer boroughs ... Queens is the future. So put the grant money into the businesses in Queens. They don’t need loans. They need grants.”

The Creek & The Cave, an LIC comedy club, announced its closure after 14 years in business [see separate story in some editions or online at qchron.com].

“If you didn’t go to The Creek & The Cave you missed out on a lot,” Councilman Jimmy Van Bramer (D-Sunnyside) said, adding, “The governor and the mayor don’t give a s--- about comedy clubs.”

Owner Rebecca Trent said closing the doors was the most heartbreaking thing she’s ever had to do and had a message for Gov. Cuomo: “How dare you turn your back on the artists and the gig workers that make this city great?”

“We want all of our customers to be safe and sound and healthy and we will do what we have to do. We will close our businesses,” McSorley said, adding, “If you want to close us, close us, but sit down and tell us what you’re going to do for us and help us out.”

McSorley said she and her husband are chasing their tails every week.

“We need hand sanitizer. We need gloves. Oh, now we close at 10. Now what do we do? I feel like an idiot,” she said. “I’m counting heads in my business every night so that we don’t get the Liquor Authority closing us down.”

State Sen. Jessica Ramos (D-East Elmhurst) said there is no state plan for small businesses. “The governor’s been twiddling his thumbs for the past seven months,” she said, adding, “You’re driving our economy into the ground in this way and it’s going to be so hard to dig ourselves out of this hole if you keep digging us in further and further and further.”

Ramos said people should not have to choose between risking their lives and putting food on the table. “It’s what’s leading to these waves,” she said.