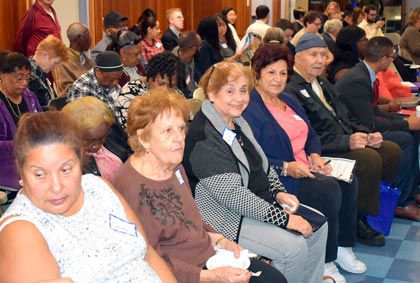 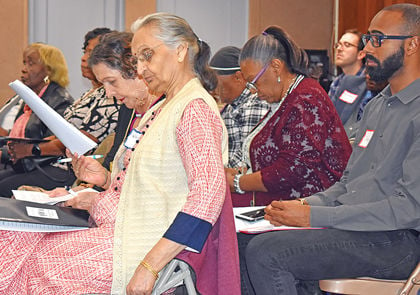 Dozens of seniors attended last week’s Queens Interagency Council on Aging Legislative Forum, and followed along during the reading of the organization’s position paper. 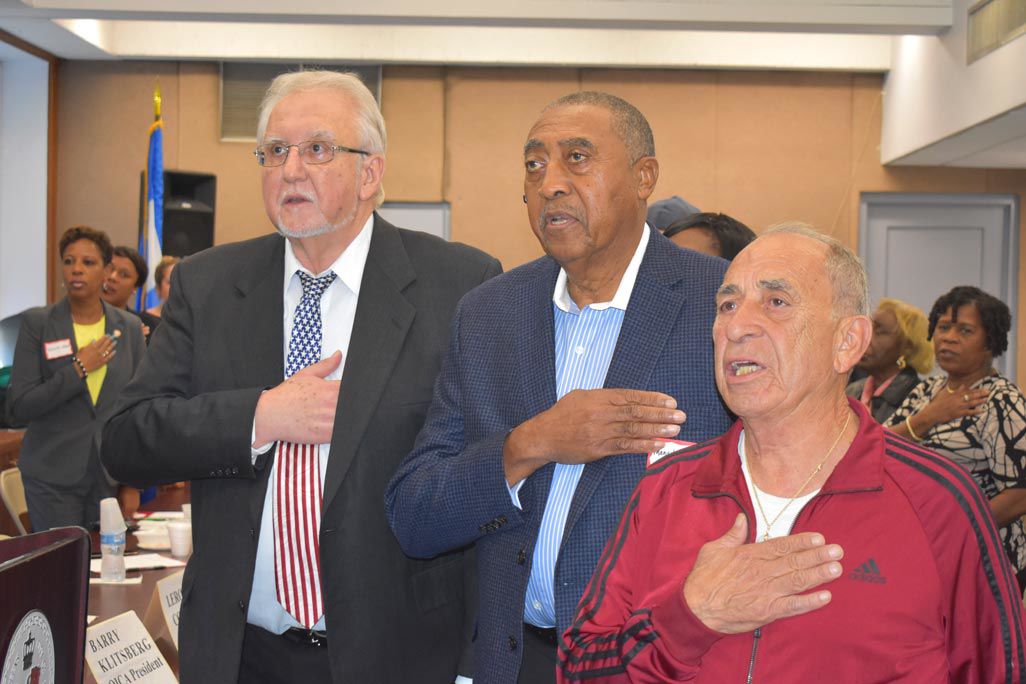 Dozens of seniors attended last week’s Queens Interagency Council on Aging Legislative Forum, and followed along during the reading of the organization’s position paper.

At its 36th annual Legislative Forum on Oct. 12, the Queens Interagency Council on Aging presented its primary concerns for the upcoming year, with a record-setting number of elected officials and dozens of the borough’s seniors in attendance.

It also marked the first time in QICA’s history that a representative of any governor was sent to attend the event, according to the organization’s president, Barry Klitsberg.

Setting the tone for the meeting, Klitsberg suggested “Seniors are in crisis. They need our help and they need it now. All members of our community, especially seniors, must make their voices heard.”

He indicated that by 2030 in the United States “the number of persons 60-plus will almost double to 72 million people. Federal, state and local programs need to be modified to accommodate this rapid growth.”

“It is QICA’s expectation that the needs of seniors be a priority on the agendas of elected officials for fiscal year 2018-19,” QICA Executive Director Bruce Cunningham said in a written foreword.

Each of the elected officials on hand offered responses.

Assemblyman Michael Den Dekker (D-Jackson Heights) indicated that many of the issues raised by QICA are fixable. “I don’t understand why they’re not being done. They take decades and no one even addresses them,” he said.

One of the most enthusiastic rounds of applause came when he condemned one particular aspect of life in the borough.

“We have horrible bus service,” he said. “I can’t understand why we give [the MTA]more money and we get less service. I’m sick and tired of hearing about that great borough Manhattan. I’d like to see bus service in Queens.”

The comment prompted Councilman Donovan Richards (D-Laurelton) to offer what he called a “friendly amendment,” saying, “If the state-run MTA stopped asking the city for money, we would have more money to do other things.”

Den Dekker indicated that for anyone having difficulty filling out an application for SCRIE, the senior citizen rent increase exemption, his office offers one-on-one assistance.

“It makes it much easier,” he said. “They’re very confusing applications.”

State Sen. Joe Addabbo Jr. (D-Howard Beach) pointed to health-related bills that are in the works. One would make it easier to locate Alzheimer’s patients who go missing. Another would help terminally ill patients on Medicaid remain in their own residences instead of being placed in nursing homes.

Councilwoman Adrienne Adams (D-Jamaica), who said she was heading off to a groundbreaking ceremony for what she called brand-new affordable senior houses, told the crowd, “Seniors are definitely a priority of mine.”

She discussed the City Council’s “little back and forth” with the mayor over the latest budget, particularly in regard to seniors. In the end, she said, “We increased quite a bit. $500 million was allocated for affordable senior housing in New York City. We also allocated millions of dollars for food pantries and for home-delivered meals.”

She admitted, however, that she was “disappointed that critical investments to fund senior meals was still left out ... it wasn’t enough. We’re still working on that.”

Her fellow Council member Richards agreed that housing is the “most critical” consideration regarding seniors.

Richards, who chaired the Subcommittee on Zoning and Franchises, said it “pushed through ... mandatory inclusionary housing. When developers ... want to build higher, and they need a zoning change, they now are required to put affordable housing in.”

Assemblyman Ed Braunstein (D-Bayside) expressed pride in the Assembly’s annual efforts to maintain “spousal refusal,” which allows a healthy spouse to protect assets from being spent on a sick spouse. The Assembly has also pushed for increased funding for Naturally Occurring Retirement Communities, or NORCs, a program that he said “facilitates people staying in their homes for a longer period of time.”

With the mid-term elections right around the corner, she reminded the audience, “We know what the power of the vote is. If we don’t take care of our seniors, we have ourselves to blame.”

Assemblyman David Weprin (D-Fresh Meadows) seconded the importance of voting, saying it “empowers the community” and, in particular, groups like QICA.

But, he added, “It’s because of the advocacy of the senior community that we’re able to battle in many ways.”

He alluded to one bill that passed for the first time this year in both the Senate and Assembly and will be going to the governor’s desk shortly: a retrofit tax credit bill, which, he explained, would allow people to deduct up to $5,000 from their state income tax for making retrofit improvements to their homes for disabilities, which often come as people get older.

As the sixth anniversary of Hurricane Sandy approaches, Stacey Pheffer Amato (D-Rockaway Park), who represents areas that were hardest hit, said, “We’re still recovering. A lot of our homeowners are not back in their homes yet, not returned to their communities. What we fight constantly for is, ‘What if the next Sandy comes?’ We talk with our senior population,” asking if they’re prepared.

“Mother Nature has no boundaries. How can we protect our seniors? That’s what it’s about,” she said.

Donna Corrado, commissioner of the city Department for the Aging, began with an admission: “We do not always get it right.”

She cited “the idea of putting a bike lane that leads right into the Cross Island [Parkway]. Who would think of that?”

“That’s why,” she said, “it’s important that your voices are heard.

“The number one issue for seniors across the five boroughs [remains] affordable housing ... what could be more important than that, having a roof over your head?

“You have my commitment to deal with the food issue at senior centers and the home-delivered meals program. We could be doing a better job of serving you better food and that’s what we’re working on.”

In her welcoming remarks, Borough President Melinda Katz said, “We work hard every day to make sure that seniors are represented. If you’re going to raise your grandchildren and children, you want to be able to live in the community that you’re in.”

Nutrition in senior centers is of particular importance, she said. “Council members and Assembly members keep that funding every single year. We work together on a daily basis.”

She also called the federal government’s new policy on granting a green card or citizenship, which could now take into account whether or not an individual is receiving subsidized healthcare, an “immoral decision.” With 60,000 children in the borough belonging to mixed-status families, she urged those in attendance to take advantage of the 60-day comment period, now in effect, to speak out on the issue.

Public Transportation must be a much bigger issue, especially for the elderly, the disabled and the pregnant. [smile]