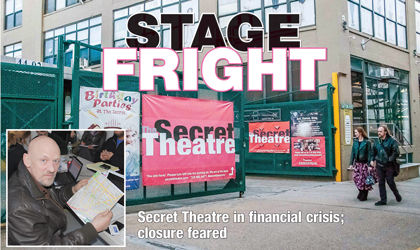 If The Secret Theatre in Long Island City doesn’t raise thousands of dollars soon through a GoFundMe campaign and other avenues, it could shut its doors as early as next month, according to Artistic Director Richard Mazda. The theater’s supporters say that would be a loss for the entire community. 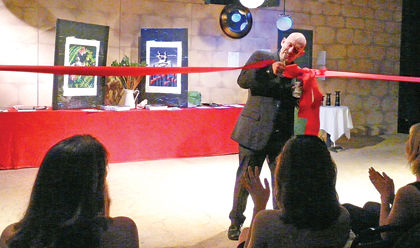 Eight years after Richard Mazda opened The Secret Theatre’s new stage, the institution finds itself in its biggest financial crisis yet, and could face closure.

If The Secret Theatre in Long Island City doesn’t raise thousands of dollars soon through a GoFundMe campaign and other avenues, it could shut its doors as early as next month, according to Artistic Director Richard Mazda. The theater’s supporters say that would be a loss for the entire community.

Eight years after Richard Mazda opened The Secret Theatre’s new stage, the institution finds itself in its biggest financial crisis yet, and could face closure.

They don’t call it show business for nothing.

Revenue matters. And after a decade of bringing straight plays, musicals, dance shows, concerts, opera and films to the borough, The Secret Theatre in Long Island City is in the throes of a financial crisis.

If things don’t improve soon, the theater could shut its doors forever as early as February, Artistic Director Richard Mazda said, likely having a far-reaching impact on the neighborhood.

While the theater has faced dire monetary issues before, “The situation we are in now is the worst,” Mazda said, and despite a burgeoning GoFundMe campaign, “We are not yet safe.”

A message on the page reads: “It’s hard to put in words how grateful we will be for your support, but we hope everyone will realize that you are supporting not only our dreams but the aspirations and hopes of thousands of artists.”

Councilman Jimmy Van Bramer (D-Sunnyside), who chairs the Cultural Affairs and Libraries Committee, said, “There is no Long Island City without the arts and without a strong presence of artists and the cultural class. The Secret Theatre fills a void, bringing people together, providing opportunities for children, in particular, to experience the performing arts.”

In addition to offering a wide variety of entertainment for general audiences (the annual Act One: One Act play festival is running through Feb. 3, with mountings of “Dutchman” and the Broadway musical “Gypsy” scheduled to immediately follow), the theater presents many performances aimed specifically at young audiences, as well as offering training in theatrical techniques for young aspiring performers or youngsters in need of confidence building.

“Basically, we are hoping to extend our lease for at least a year and then we are giving ourselves that year to reorganize and find ways to permanently avoid these regular crises,” Mazda said.

Plans include making “substantive changes to our organizational structure,” he said, including the founding of a new nonprofit to help raise grants and funds. Supporters can contribute via gofundme.com/savethesecret, by sending a check or making a cash donation at the theater.

If the current campaign is successful, the funds would be used to secure the theater’s immediate and mid-term future, Mazda said.

However, he cautions that if it finds itself in a similar position next January, “We will probably not survive. If the funding model is not sustainable, then I believe we could close in 2019.”

Mazda blames the “vicissitudes of the economy, fear about ongoing funding for the arts, and general 2017 malaise” for the crisis.

Struggling to stay afloat in the theater world is nothing new. According to Lynn Lobell, grants and resource director for the Queens Council on the Arts, it is “hard to keep the lights on. Costs are crazy. Rents are crazy. The cost of doing business in the city is not easy for any arts organization,” especially if they don’t own their own space.

Lobell noted that the council offers program support to arts organizations, providing funding — albeit limited — specifically geared toward putting on a production, such as pay for the involved artists and materials used in the production. It does not, however, provide general operating support, including funding for rent and building maintenance.

“The Secret Theatre plays a pretty big part” in the local theatrical scene, she said. “It would be a loss if it has to close its doors.” She indicated that the QCA has already offered support to the theater for the 2018 calendar year.

According to Mazda, the council’s grant of $2,500 represents the theater’s only grant this year. He indicates on the theater’s website that it receives no substantial grants from the city, state or corporations, with funding relying heavily on ticket sales and donations.

And, Mazda pointed out, because of rules set by the Actors Equity Association, the professional actors’ union, the theater is not allowed to raise its ticket prices above the current $18, the same as when it opened 10 years ago.

Losing the theater, a 99-seat space with 3/4-round seating that offers flexible staging possibilities, would result in a vacuum in the midst of a still-aborning artistic enclave. Steve Kanellos, owner of the nearby Court Square Diner, recalled that when he first came on the scene 27 years ago, it was “a very bad area, full of prostitutes. I appreciate the changes in the neighborhood. I support the artists. I’m the biggest donor for The Secret Theatre.”

Theatergoers and performers alike would be equally affected. Erin Clancy Balsamo, a Forest Hills resident, has been on both sides of the footlights at the theater. In addition to appearing on stage, she has attended several performances there over the years, most recently bringing her young son to see the musical “A Charlie Brown Christmas.”

“I would hate to see it close because it offers a quality performance space that is accessible financially both to the theatergoer as well as the performers,” she said. “As both a patron and a performer at this venue, I think it is a treasure.”

She particularly appreciates the intimacy of the space. “It connects the audience and the performers in a unique way. I’m so inspired by the possibilities that this theater could continue to offer writers, performers and the community.”

Any time a theater closes or is forced to move, “it’s a loss for the local community,” Van Bramer said. “We have encouraged Richard to apply for funding from our office. We want to support his work.”

While commercial pressures prove the ruination of many theaters, Mazda was quick to point out that his landlord has been willing to negotiate.

“He’s trying to work with us,” Mazda said. “He doesn’t want us to leave; he’s proud of the theater.”