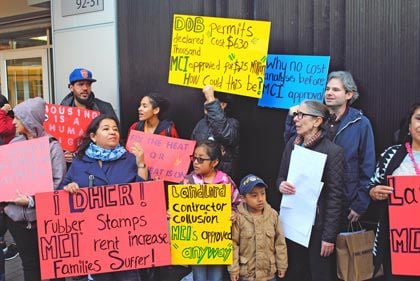 More than 100 residents of rent-controlled apartments gathered outside of state offi ces in Jamaica on Tuesday to protest rules that allow massive rent increases to pay for capital improvements to their apartment buildings. 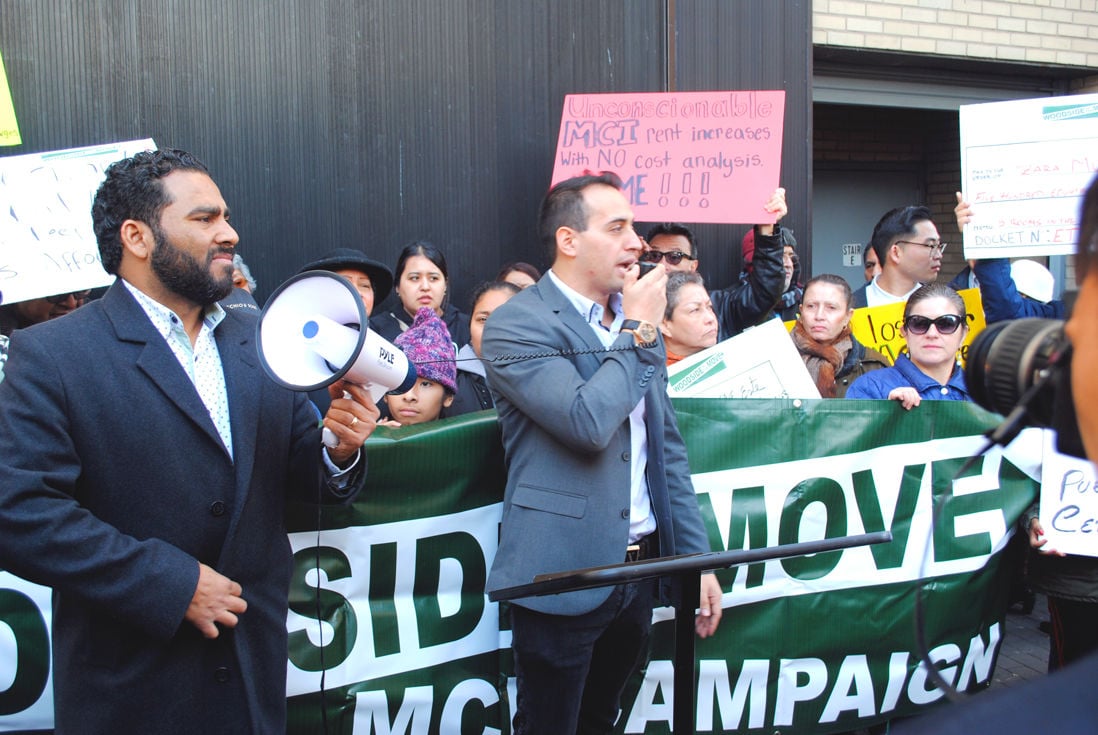 Ivan Contreras of Woodside on the Move speaks to more than 100 renters who are calling on the state to change regulations that allow what they claim are crippling and often unnecessary rent hikes on rent-controlled apartments.

More than 100 residents of rent-controlled apartments gathered outside of state offi ces in Jamaica on Tuesday to protest rules that allow massive rent increases to pay for capital improvements to their apartment buildings.

Ivan Contreras of Woodside on the Move speaks to more than 100 renters who are calling on the state to change regulations that allow what they claim are crippling and often unnecessary rent hikes on rent-controlled apartments.

More than 100 people from throughout Queens gathered in Jamaica on Tuesday seeking changes in a state law that they say allows landlords to slam them with unaffordable rent increases.

Under state laws, owners of rent-controlled buildings can apply for rent increases to offset the cost of major capital improvements — “MCI” was used as an epithet by the marchers — on a per-room basis.

Speakers included tenants from Jamaica, Woodside, Elmhurst and other neighborhoods. The rally, organized by Woodside on the Move, took place outside the offices of the state’s Department of Homes and Community Renewal on Union Hall Street.

“These increases are forcing people to leave their own apartments,” Ivan Contreras of Woodside on the Move said.“It’s not right. Some people have been increased $45 per month for each room. Someone here today has gotten over $100 per room. $550 per month isn’t a rent increase — it’s eviction.”

Several tenants accused the DHCR of being a rubber stamp for landlords, alleging that the agency has signed off on improvements that were not necessary; did not perform their intended purpose; and, in one case of a tenant, had the installation of new gas lines in her kitchen stopped — by order of the New York City Department of Buildings as unsafe.

“[DHCR] didn’t know they were installing a bomb,” Contreras said.

In a statement, a DHCR spokesperson said the agency is committed to protecting the rights of rent-regulated tenants and ensuring compliance with the rent laws, as established by the state Legislature.

“When an owner replaces a building-wide system in a rent-regulated building, they may apply for a rent increase from all tenants,” the spokesperson said in an email to the Chronicle. “If the Major Capital Improvement is approved, the increase becomes permanent, as required by law.”

DHCR protocols include notifying tenants of the work performed and if there are complaints on the workmanship, sending inspectors to conduct inspections to verify that the work was completed satisfactorily.

The agency also conducts inspections in a sampling of MCI applications whether there are tenant complaints or not; and is required to conduct a full audit of every application, reviewing contracts, change orders, invoices, checks, bank statements and other relevant documents.

Acknowledging that the regulations are written into state law, Tuesday’s organizers and marchers want the law rewritten. State Sen. Mike Gianaris (D-Astoria) has been working with the group in recent months and said a bill introduced by Sen. Liz Krueger (D-Manhattan) would do just that.

Among its provisions, Gianaris said, is one that would remove increases once a given capital improvement is paid for.

“Give the money back to the tenants,” he said.

If a tenant believes that an MCI order is based on an error in law, they should file a Petition for Administrative Review form RAR-2 within 35 days of the issuance of the order by contacting the Office of Rent Administration at 718-739-6400.