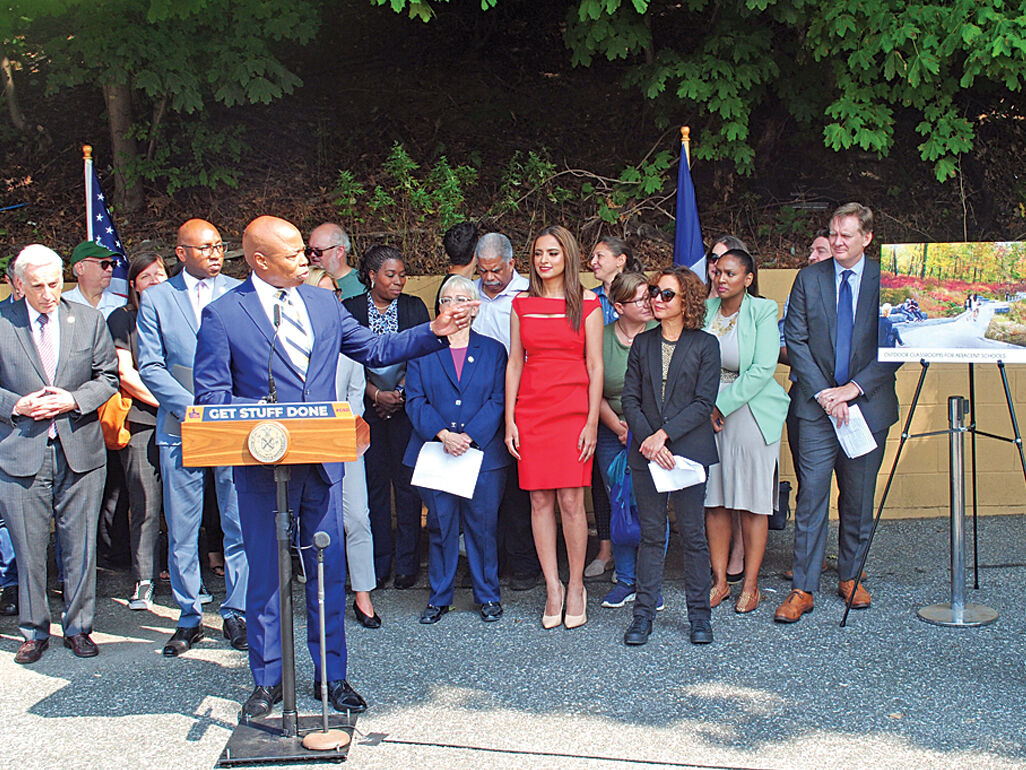 Mayor Adams visited Forest Hills last week to announce that phase one of the QueensWay project, which would bring 47-acres of linear park to central and South Queens, is getting a $35 million investment. Many see it as a major blow to efforts to bring transportation to the area with the QueensLink proposal. 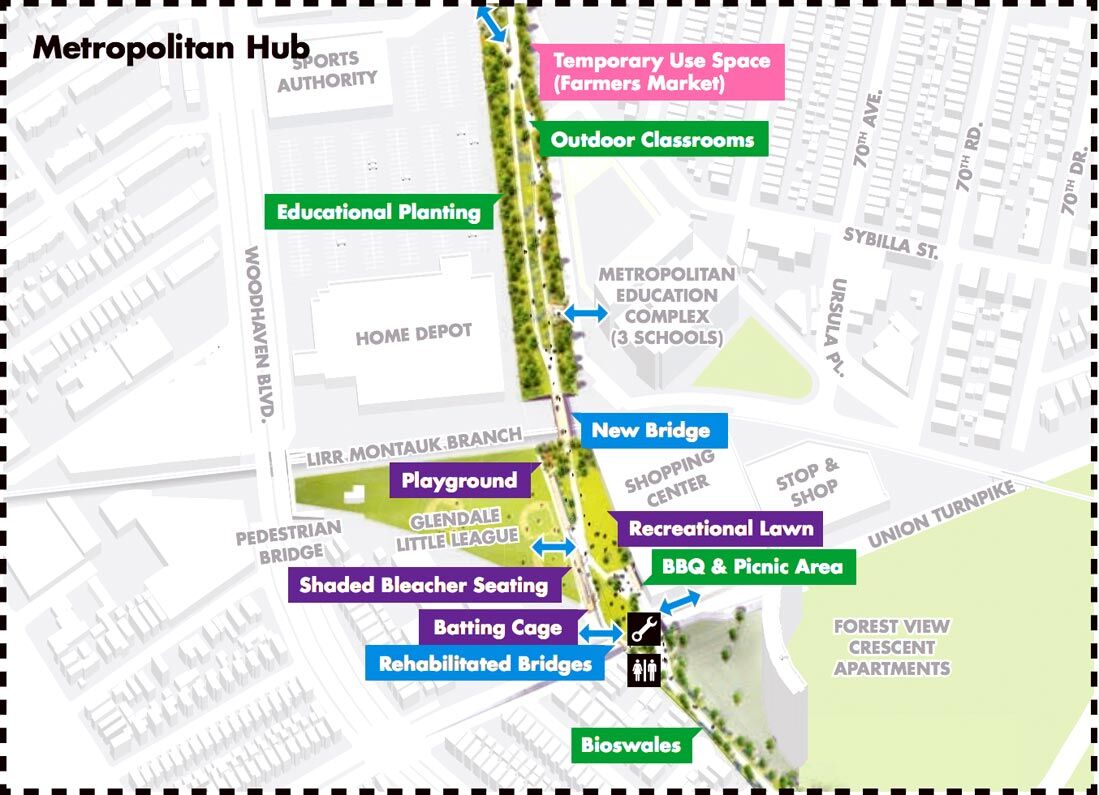 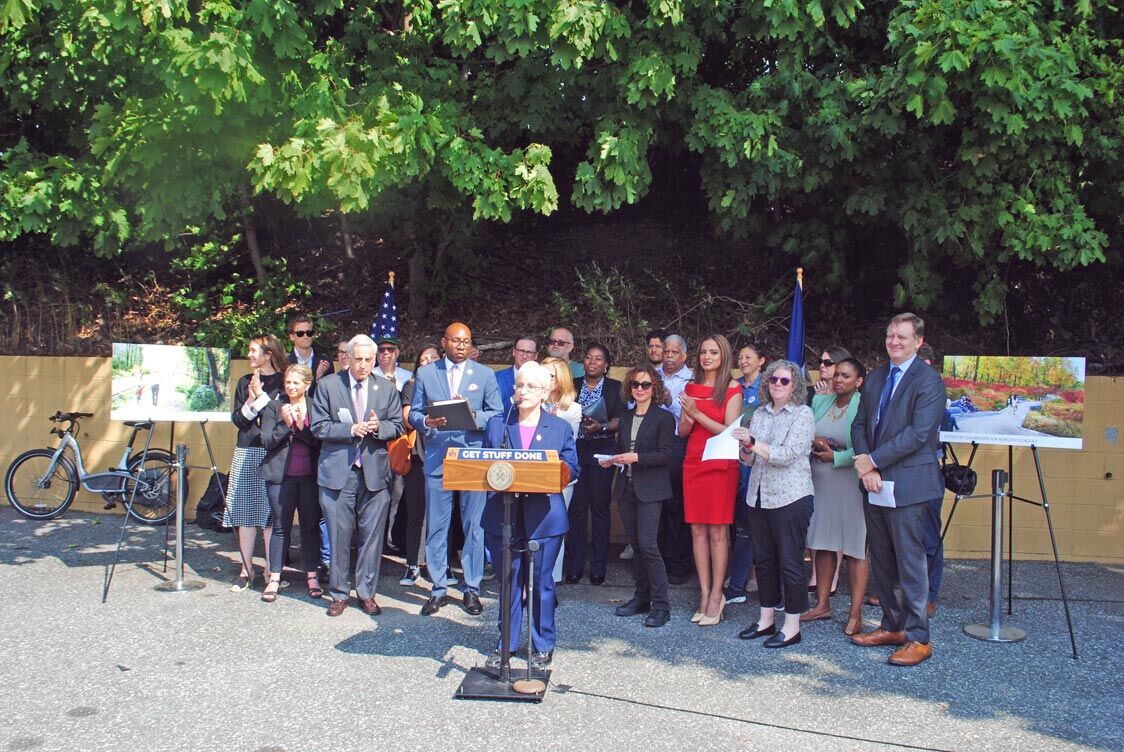 Mayor Adams visited Forest Hills last week to announce that phase one of the QueensWay project, which would bring 47-acres of linear park to central and South Queens, is getting a $35 million investment. Many see it as a major blow to efforts to bring transportation to the area with the QueensLink proposal.

Mayor Adams announced a $35 million investment into the first 5-acre phase of a project planned to bring a 47-acre linear park to central and South Queens.

The project, which has been advocated for since 2011, was in competition with the proposed QueensRail, later QueensLink, a transit corridor that would reactivate the old Rockaway Beach Branch.

“Phase one will convert abandoned railroad tracks which have been used as a dumping ground or worse into a five-acre linear park and provides a safe way for residents to walk, to jog, to enjoy the open space,” said Adams at a press conference on 73rd Avenue in Forest Hills last Friday, near a stretch of the rail right-of-way that borders the Metropolitan Expeditionary Learning School.

The tracks, which ran from Rego Park to the Rockaways, have been out of service for over 50 years.

The move comes a month after numerous officials signed on to a letter calling for the mayor and governor to fund an environmental impact study of the rail proposal, which also would include some park space.

“There hasn’t really been a political will to get anything done because of the competing interests,” said Queens Borough President Donovan Richards.

“We couldn’t get everybody on one page. But the mayor made an executive decision to say, ‘We’re going to do something here,’ which I respect,” he told the Chronicle.

In his remarks at the press conference, Richards echoed the idea that the QueensWay could be the borough’s version of the High Line in Manhattan. He did, however, bring up the lack of transportation in Queens and the continuing need to address it.

“Let me just point out that this is not an either-or scenario here,” said Richards, who did sign on to the request for an EIS study of the QueensLink railway proposal.

“We need to do both when it comes to making sure that we can enhance our public transportation and also ensuring that our communities have access to open space,” he said, adding that the state needs to “get the train moving” on the QueensLink study.

Miriam Bensman and Rick Horan of QueensLink were present to voice their opposition to the project.

Despite talk of a train line still being an option, Bensman is not convinced.

“If they build a park here, and it will probably be lovely and I’ll probably want to enjoy it, but then we need to run the train line through,” said Bensman, who is senior advisor for QueensLink.

“They’re not designing it with the train in mind … They want to build a bike path at the top of the embankment where the train tracks are now. Then, you’re going to tear it off after you build it? How does that make sense?”

Queens Chamber of Commerce President and CEO Tom Grech saw the estimated costs of the rail project to be prohibitive.

MTA reports put it at over $8 billion but QueensLink suporters say that was inflated and estimate it would cost half that.

“It was really tough to ignore the estimates for the potential reactivation of the rail line,” said Grech. “I don’t think the MTA is in any position to embark on a project like that.”

He had tried to suggest compromises in the past, he said, but does see the QueensWay project as a “win for economic development.”

Assemblywoman Jenifer Rajkumar (D-Woodhaven), who also signed on to the QueensLink study request, emphasized the reach QueensWay would have in her district.

“All the major thoroughfares in my district will be connected to QueensWay,” Rajkumar said.

“That includes Rockaway Boulevard, 101st Avenue, Jamaica Avenue, Atlantic Avenue. This is extremely exciting for my district. It will create new green space for Little Guyana and, of course, it will create wetlands that are going to help us with flooding as we combat climate change.”

Councilmember Lynn Schulman (D-Forest Hills) was instrumental in pushing the project and said she has been a supporter since Andrea Crawford and Travis Terry, both members of the Friends of the QueensWay steering committee, brought the idea to her 10 years ago, she said.

“There were many obstacles to overcome but I was determined when I took office in January to bring this extraordinary vision to fruition,” Schulman said.

The existing tracks are set to be reused as light fixtures, according to architect and designer Susannah Drake. The rails will also form edges of planting beds separating fast and slow traffic, she said in an email.

The first phase of QueensWay will transform the vacant, city-owned stretch of rail right-of-way in Forest Hills into a 5-acre park with 0.7 miles of greenway.

“One important hallmark of the Adams administration is we consider parks as part of our city’s infrastructure,” said Deputy Mayor for Operations Meera Joshi Friday.

“That hasn’t been the case in years past, but as fundamental as parks are to our well-being, our climate resiliency, and to our health and peace of mind, they absolutely are at the core of our infrastructure.”

The New York City Economic Development Corp. will manage construction of the space, called the Met Hub, along with the city Parks Department. Funding for the project includes $2.5 million from the City Council.

The plan was developed by the Trust for Public Land, and the New York State director for the organization Carter Strickland says work will begin in about a year.

First, the design, which is about 75 percent complete, he said, must be finished.

“There is a lot of infrastructure money coming down from the federal and state government so the timing could work out really well,” said Strickland.

In the meantime, QueensLink allies are not done fighting.

“I’m going to push the MTA to keep their promise to do the EIS and make sure that we start getting funding to make these things happen for transportation to the southernmost portions of Queens.”

She said there is an “absolute possibility” for both projects and that the City Council was assured that the QueensWay would not impede the QueensLink at all.

“It is a disappointment to see millions of dollars being poured into a park rather than putting funding towards creating more accessible transportation which the people of Queens actually need,” Assemblywoman Stacey Pheffer Amato (D-Rockaway Park) said in a statement.

“Communities throughout Queens have spoken on what they truly want and we will all continue to fight to make that happen.”

QueensLink advocates “transcended communities and reached out to engage with the public,” she added.

The lack of public engagement around QueensWay is where a lot of the anger, advocate Paul Trust says, comes from.

“We were just kept from the whole conversation,” he said. “We couldn’t even get a meeting with the deputy mayor.”

Trust continued, “We’ve always felt what should happen should be the will of the people. We have a vision for it. It’s unfortunate that they don’t see how it could be both park and transit.”