Skip to main content
You have permission to edit this article.
Edit
News
Editions
Opinion
qboro: Arts
Photos
School News
Classifieds
About Us
Sections
Digital Edition
Page One
Sports
1 of 5 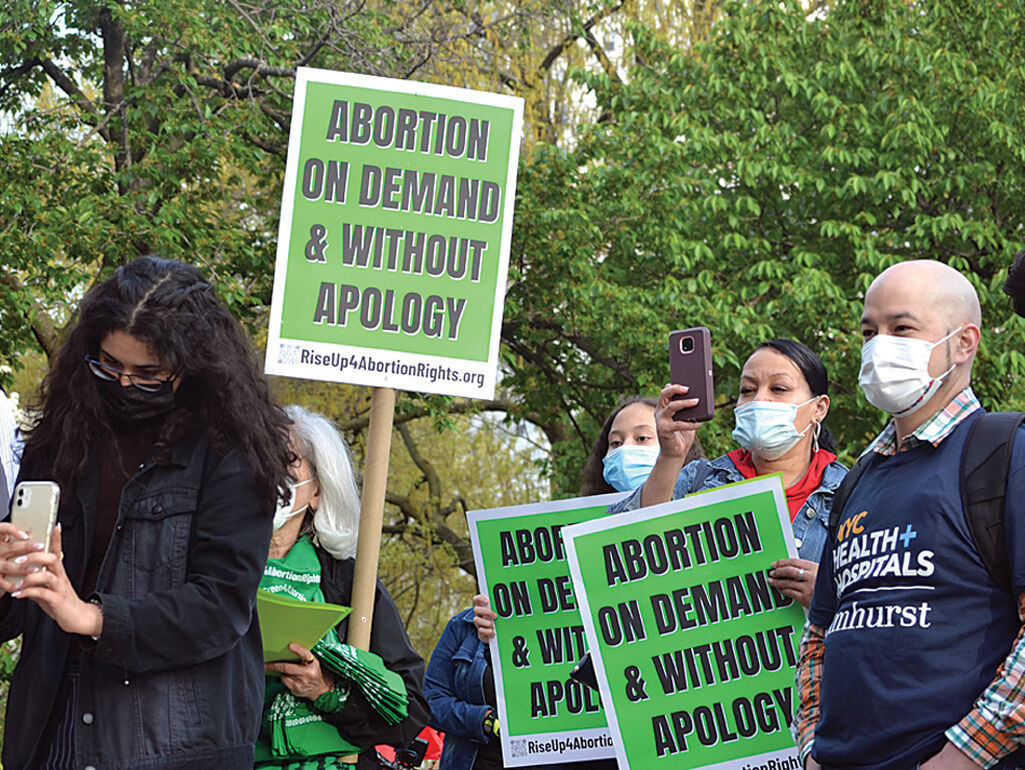 Protesters gather outside Borough Hall in Kew Gardens on May 5 to press for abortion rights after a leaked document indicated the United States Supreme Court may be leaning toward overturning the landmark 1973 decision in Roe v. Wade. 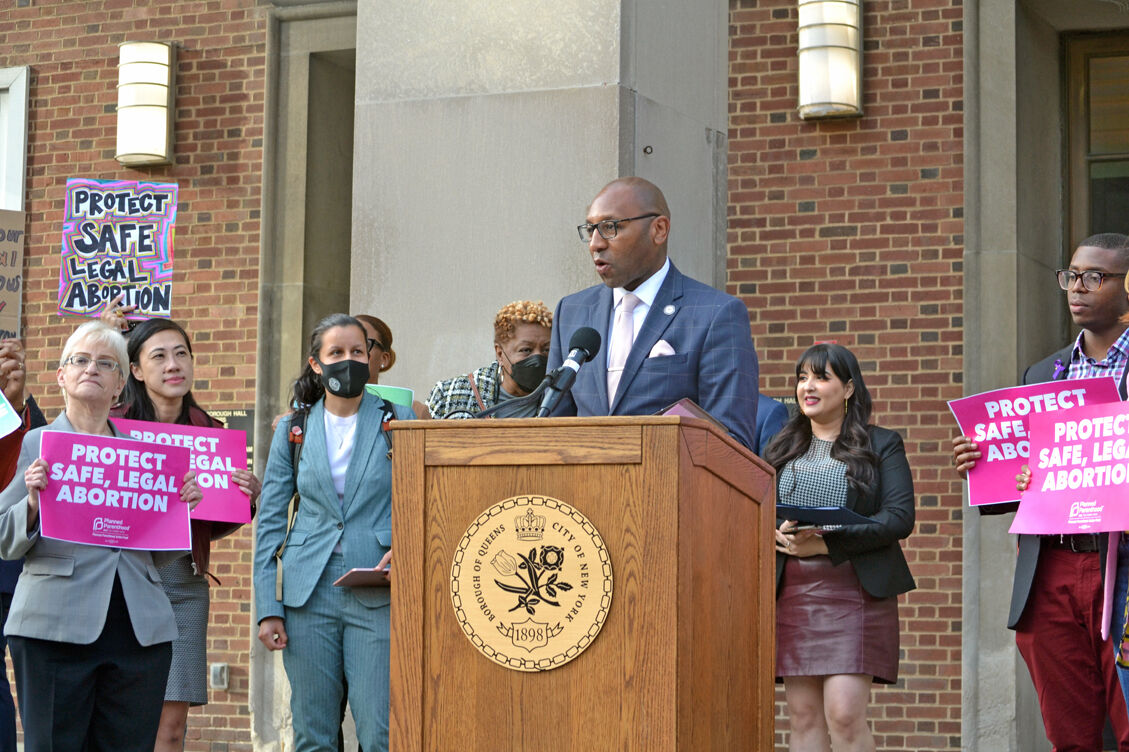 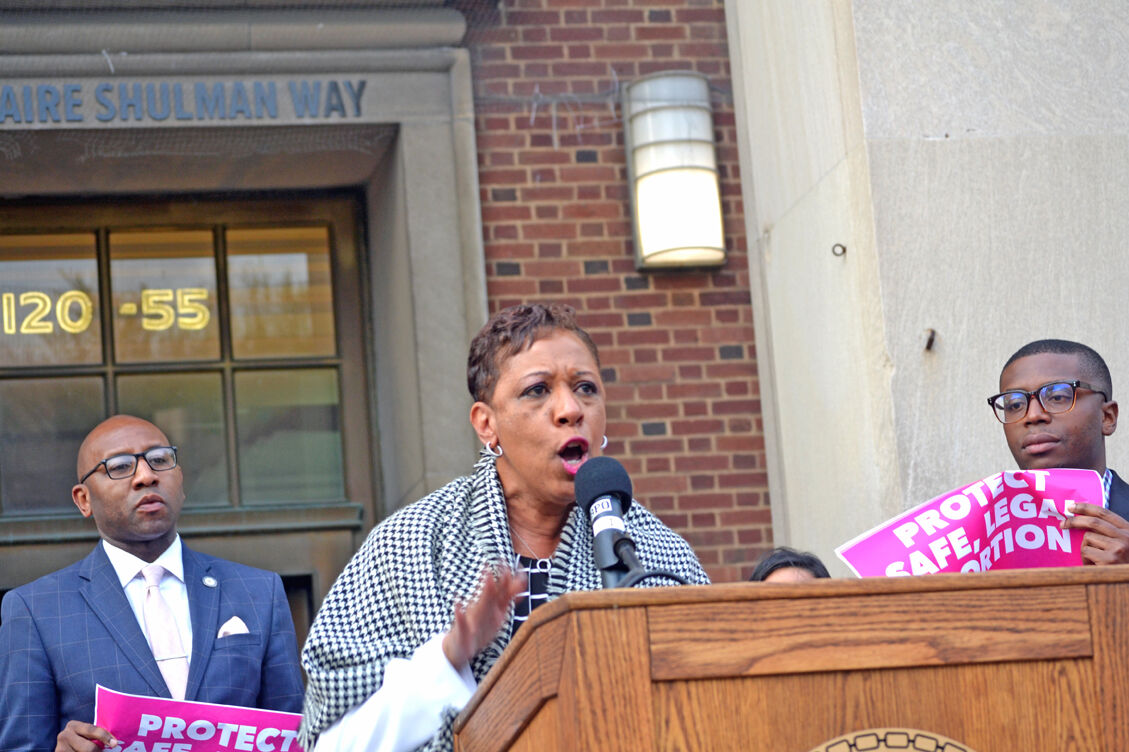 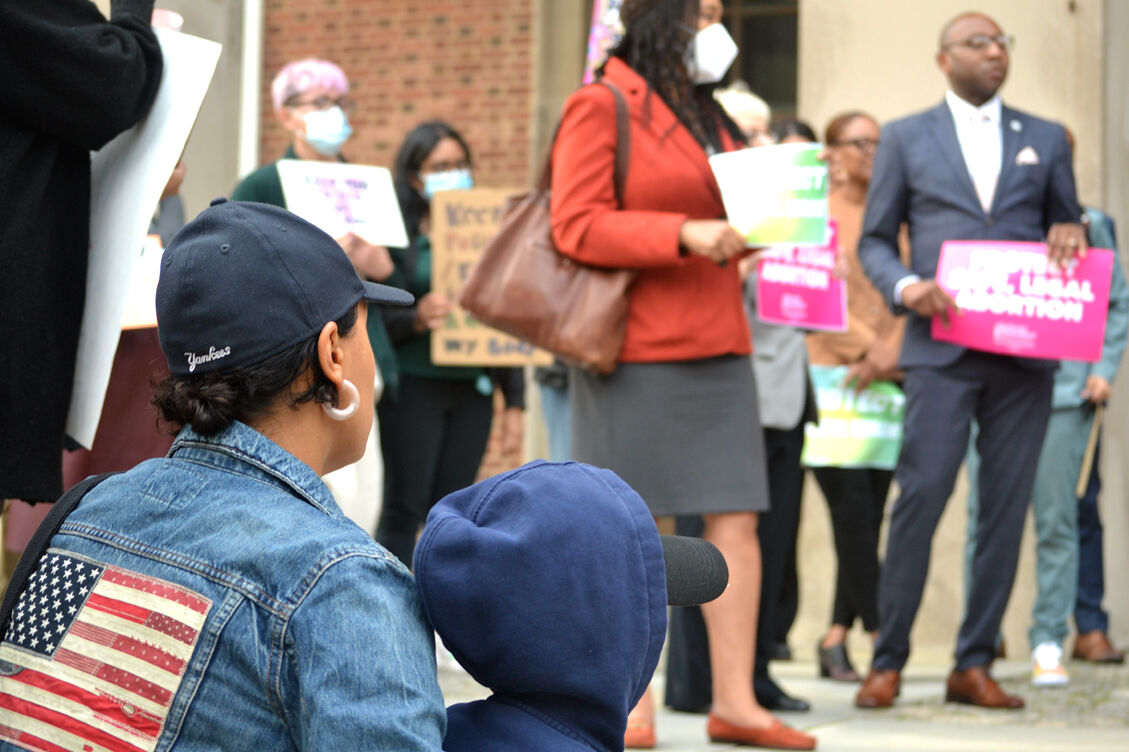 Julie Romero sits with her son as they listen to the rally’s speakers. 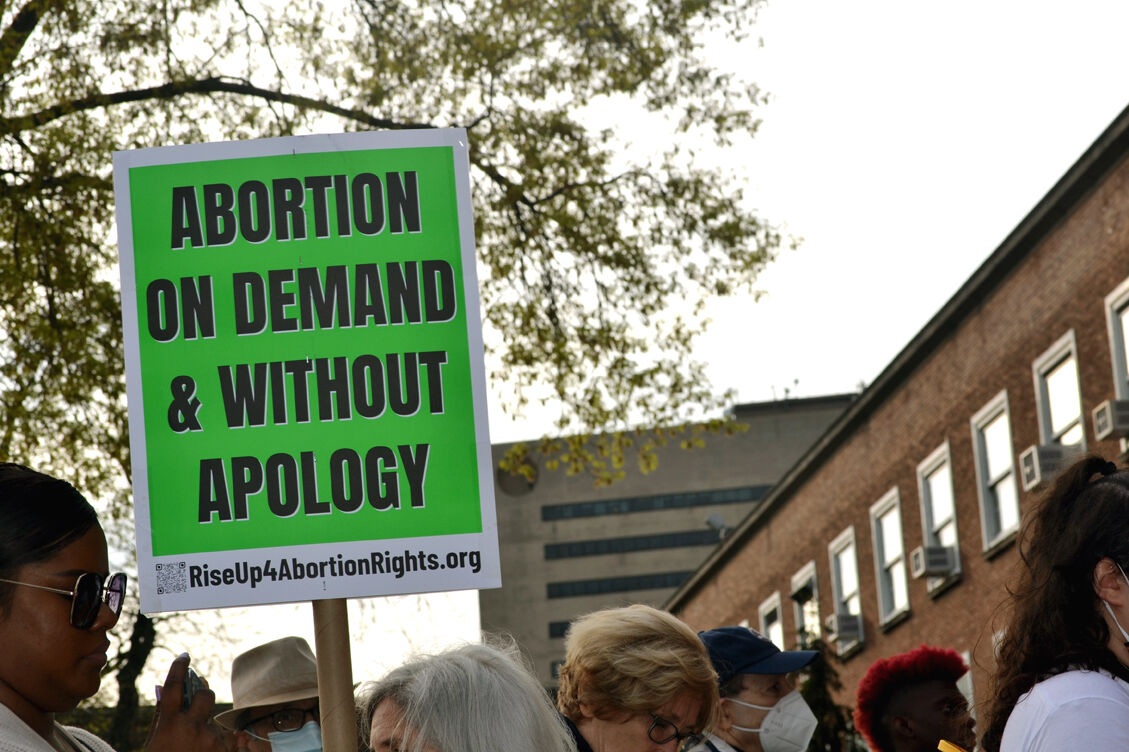 Protesters gather outside Borough Hall in Kew Gardens on May 5 to press for abortion rights after a leaked document indicated the United States Supreme Court may be leaning toward overturning the landmark 1973 decision in Roe v. Wade.

Julie Romero sits with her son as they listen to the rally’s speakers.

Donning a pink and navy-striped crewneck and a button with a clothes hanger crossed out by a red-slash “no” symbol, Forest Hills resident Diane Weisstuch certainly looked the part as she stood on the steps of Queens Borough Hall ahead of last Thursday evening’s abortion rights rally.

And it wasn’t her first rodeo, either. Weisstuch said she made the button for the 2017 Women’s March, when, following the election of Donald Trump as president, many Americans feared the right to choose would come under threat. But, she said, things are different this time, as, following the publication of a leaked, draft majority Supreme Court decision last week, the 1973 landmark case Roe v. Wade looks poised to be overturned, and with it, that fear would become reality.

“It’s extremely serious both times, and what we’re seeing now is the consequence of what happened in 2016,” Weisstuch told the Chronicle, referring to Trump’s election. Filled with “extreme disappointment and complete outrage,” she said she wants to do, “anything we could do to just be counted as protest for what’s coming our way.”

“I was here 50 years ago when this all started,” said Beverly Zuckerman, also from Forest Hills. She, too, said she was “distressed” and “disappointed.”

“Just sad we’re going through this,” she added.

The two were certainly not alone: Roughly 100 people carried signs and feelings of anger as they joined Borough President Donovan Richards as he led Queens residents, activist groups and fellow elected officials in mourning the imminent loss of nationwide access to safe, legal abortion.

“Queens will not stay silent as Roe was gutted by five right-wing justices in black robes, as if they were the Grim Reaper trying to destroy one of our country’s most sacred rights,” Richards said. “Overturning Roe won’t save lives — it will cost lives. And we know that those impacted the most would be communities of color, low-income communities, young people and the LGBTQIA+ community.”

City Council Speaker Adrienne Adams (D-Jamaica) agreed, and, reflecting on her time working at a women’s healthcare center while a student at Spelman College, noted that the effort to overturn Roe v. Wade has long been at work.

“I held the hands of women as they agonized over their well-thought-out and informed choices. I carry all of their stories with me to this very day — but it’s not something that the male-majority Supreme Court would ever understand,” she said. “We will never go backwards. We will continue to stand up, we will continue to speak out. We will continue to march until tens of millions of people across this country have their right to access safe and legal abortions.”

In recent days, some elected officials on the right — both in Queens and at the national level — have drawn more attention to the very fact of the leaked draft rather than its actual contents, calling for an investigation as speculation about the leaker has circulated (Chief Justice John Roberts quickly called for one last Tuesday when he confirmed the draft’s authenticity).

But Hoffman got straight to the point: “I’m not going to sit here or tell you who I think leaked that paper, why we’re at this point — we’re here.”

“Now, we have to fight,” she added before leading the crowd in cheering “Hell no, post-Roe.”

Tannuja Rozario, a founding board member of South Queens Women’s March, made similar calls to action.

“This moment right now is a wake-up call,” she said. “Our ability to make our own decisions, to family-plan, to plan our future and to ensure that our communities are living a healthy, reproductive life is on the line. So what do we do in this moment? We stand up and fight back.” Rozario encouraged the crowd to educate themselves on abortion access and support those groups working toward that goal.

Likewise, Richards emphasized that while abortion is protected by New York State law, expanding access is still critical, and encouraged elected officials at the state level to pass legislation to that effect. Specifically, both he and Adams referred to a bill introduced by Jessica González-Rojas (D-East Elmhurst) last week, which would provide funding for abortion providers and nonprofits supporting access to abortion.

On Monday, New York Attorney General Tish James held a press conference with the assemblymember, pledging her full support of the legislation. Gov. Hochul announced Tuesday that the state will put $35 million toward supporting abortion providers.

The crowd left the program energized after Deputy Borough President Ebony Young closed with chants of “My body, my choice.” That included Forest Hills resident Julie Romero, who had brought her two school-aged children to the rally.

“It’s important to have her understand her rights. It’s more important for me to have him understand female’s rights,” she said, referring to her daughter and son, respectively.

And for her daughter, Sophia, that message seemed to take hold: “Abortion is important.”