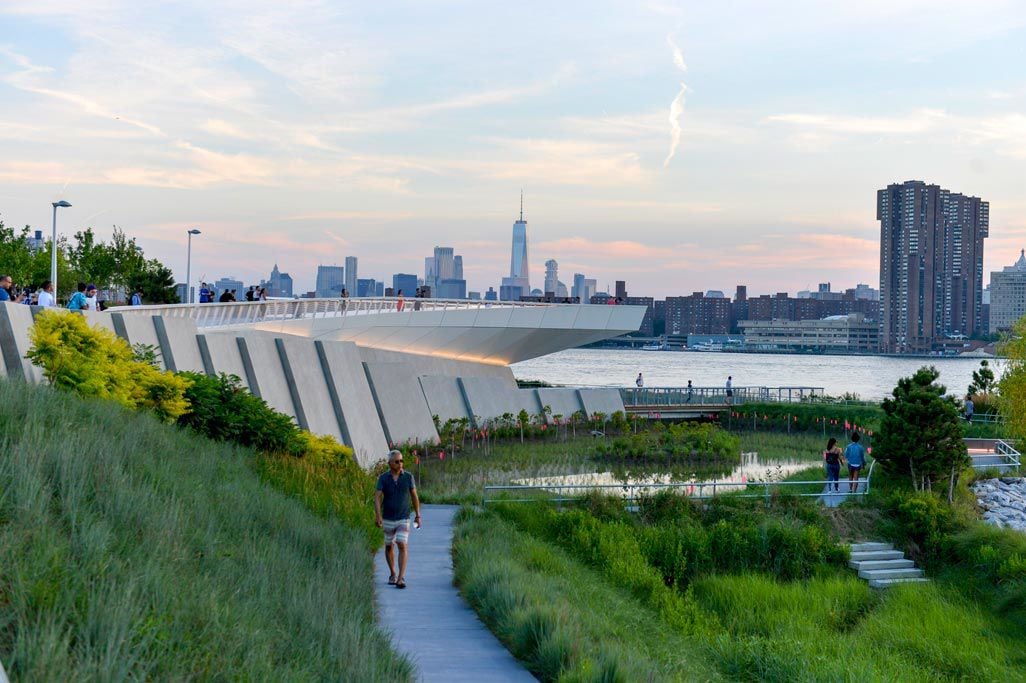 The new Hunters Point South Park, above, was built on land that used to house factories. 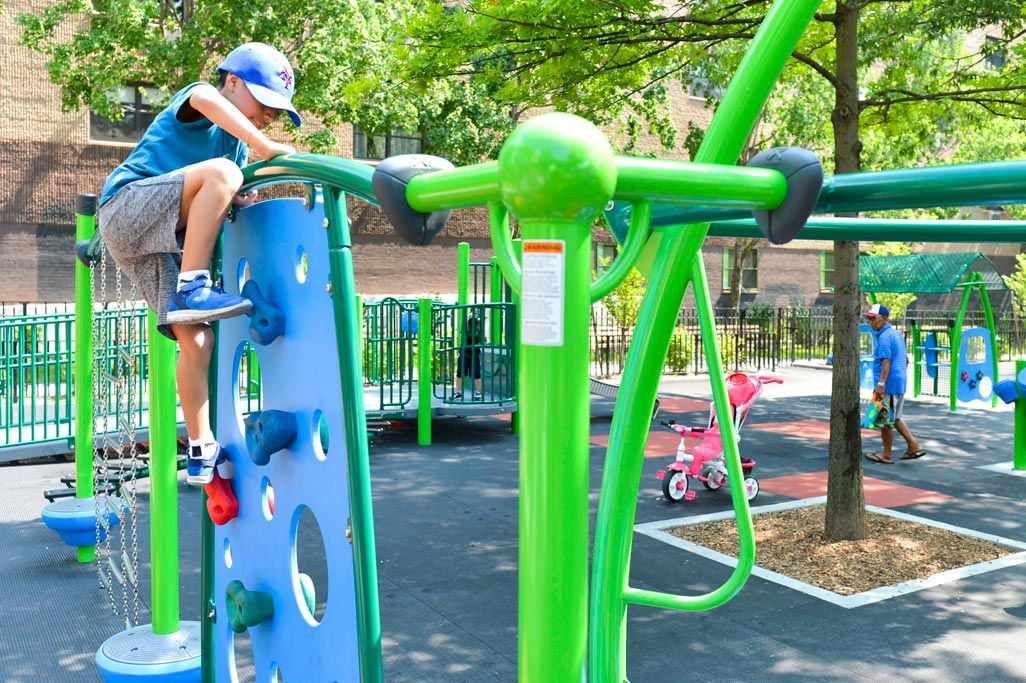 Big Bush Park is tucked in near the BQE in Woodside. 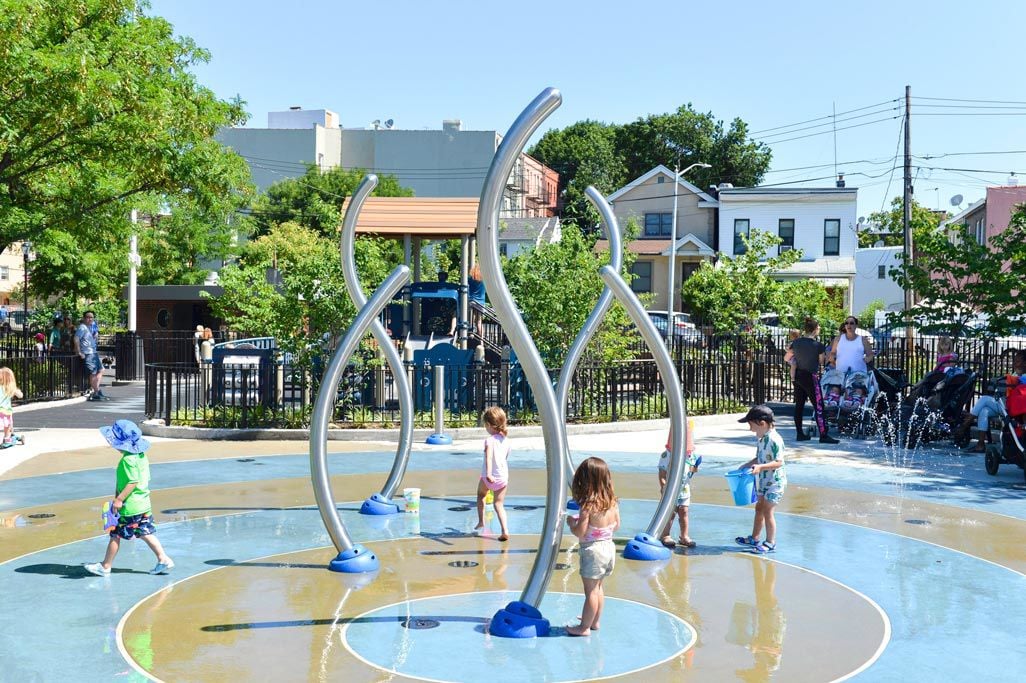 Astoria Heights Park was redesigned to keep kids’ activities like the spray showers separate from adults.

The new Hunters Point South Park, above, was built on land that used to house factories.

Big Bush Park is tucked in near the BQE in Woodside.

Astoria Heights Park was redesigned to keep kids’ activities like the spray showers separate from adults.

The average age of a New York City park is older than Helen Mirren — and, many would say, not nearly as well kept.

Little wonder. The city is rough on just about everything — roads, bridges, subways, mayors. All of them tend to look older after just a few years of use.

Keeping up with repairs, not to mention the more expensive and arduous task of makeovers, is a big job.

Eli Dvorkin, policy director for the Center for an Urban Future, a nonpartisan think tank, told a City Council hearing just last month that its two-year study found “parks in every borough are struggling with aging assets that are at or near the end of their useful lives.”

But the pace of renovations of the city’s parks and playgrounds, particularly in Queens, appears to be picking up.

In 2018, more than a dozen playgrounds were rebuilt from the ground up in neighborhoods from East Elmhurst to Far Rockaway.

In the year ahead, according to the new Queens borough commissioner of parks, Michael Dockett, some long-awaited projects will be ready for that most indispensable of civic events, the ribbon cutting.

The first phase of renovating the athletic fields in Astoria Park is slated to finish in May.

The historic Vanderbilt Motor Parkway, now a bike and hiking path, in eastern Queens is being repaved this year.

A new nature center will replace the old trailer in Idlewild Park in Rosedale and an addition to the one at Alley Pond Park in Douglaston will be completed.

The Lower East Playground in Highland Park — one of Queens, best-kept secrets, it overlooks the pristine Ridgewood Reservoir — is being rebuilt this year at a cost of about $10 million.

“This is only my fourth week on the job,” said Dockett, who replaced the borough’s longtime parks commissioner Dorothy Lewandowski last month.

“But the seed money is there. I have a lot of places to go see.”

So it’s time for genuine celebration when a park is overhauled or a playground brought back to shiny and new.

Here are some of the playgrounds and park facilities that were made over in the last year — just in time for the nice weather.

• Big Bush Park (78th Street and 34th Avenue) — A couple of blocks off Queens Boulevard next to the Big Six Towers in Woodside, this was a top-to-bottom renovation that included new equipment for kids, an adult workout site and new trees that give the park a more open feel.

• Travers Park with Staunton Field (78th Street and 34th Avenue) — In the heart of Jackson Heights, this $7-million project will combine two playing areas and several disparate sports sites — basketball, tennis, handball courts — into a seamless, two-block park. The first phase opened in February with the completion of the kids’ playground.

• Louis Armstrong Middle School (Junction Boulevard and 32nd Avenue) — Kids from the school took over from the adults and decided what they wanted in their new playground in East Elmhurst. Are you surprised that includes volleyball and basketball courts, a gazebo and handball courts?

• Grassmere Playground (Briar Place and Hanson Court) — A grand rebuild that was opened by the mayor last spring as part of a five-borough, parks relay of newly renovated playgrounds. The $3.3 million project in Far Rockaway included two new play areas (one for toddlers and another for kids from 5 to 12), a track, a junior soccer field, a wooded trail, an outdoor classroom, a basketball court, adult fitness equipment and a children’s water play area.

• Louis C. Moser Playground (25th Avenue and 76th Street) — On the border of East Elmhurst and Jackson Heights, the playground that used to be known as Bulova Park was renamed for a longtime civic activist from the 1970s and ’80s. A nearly $2 million makeover brought in a spray shower for the kids, game tables for chess enthusiasts and a new drainage system to solve its water problems.

• Triborough Playground B basketball courts (Hoyt Avenue and 21st Street) — The first major renovation to these courts in more than 20 years was paid for by cable TV’s Big Ten Networks to mark its tournament coming to Madison Square Garden.

• Louis Simeone Park (101st Street and Strong Avenue) — A $2.2 million makeover turned an unused corner of the Corona park into playground, with a spray shower, swings and an adult fitness spot.

• JHS 189Q and Flushing International School (144th Street and Barclay Avenue) — A new $1 million playground next to two Flushing schools opened with a running track, an artificial-turf sports field and even an outdoor classroom. Met Life was a sponsor.

• Hunters Point South (Center Boulevard and 54th Street) — At a cost of $100 million, this is one of the biggest and most expensive park projects in Queens in several years. But it is so big and spectacular, you’ll soon forget the price tag. This waterfront park along the East River and Newtown Creek was an abandoned industrial site in Long Island City.

While the facilities include several playgrounds, a dog run, a bikeway and a picnic terrace, the star of the park is the view. A 30-foot-tall cantilevered platform was built along the shoreline for viewers to admire the skyline and watch the boat traffic on the river.

It opened last June and is quickly becoming a crown jewel of the parks system in Queens.

• Merrick Academy Charter School (136th Avenue and 218th St) — This school in Laurelton had been without a real playground since moving to a new neighborhood in 2003. So the volunteers got together over a weekend last summer and built one themselves.

The volunteers came from among the school’s parents and Delta Airlines workers at all three New York airports. The expertise and materials came from KaBOOM, a national nonprofit that specializes in building playgrounds in neighborhoods that need them.

•Astoria Heights Playground (45th Street and 30th Road). The playground got its first major renovation in more than 20 years. The space was designed to put adult stuff like tennis and volleyball courts on one side and things like a large, new spray shower area and pint-sized equipment for kids on the other.