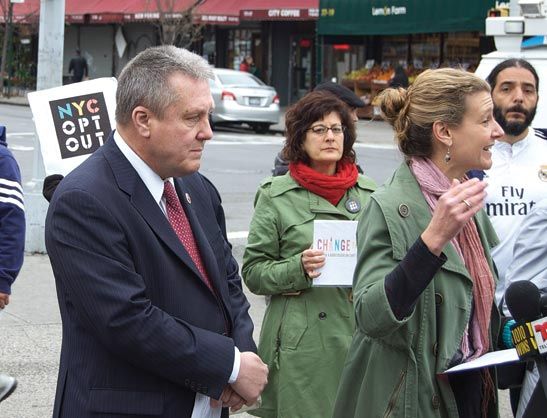 City Councilman Danny Dromm, a former teacher who has spoken out against the English Lanaugage Arts and math tests many times, hosted a rally Tuesday morning across from PS 69 in Jackson Heights, where eight students had declined to take the excams. At nearby IS 230, 11 students chose not to take them. 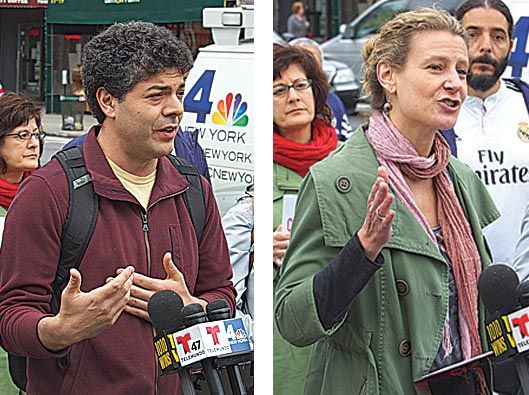 Parents Danny Katch, left, and Michelle Kupper, say the standardized tests many across the city are boycotting this week have taken over classrooms.

City Councilman Danny Dromm, a former teacher who has spoken out against the English Lanaugage Arts and math tests many times, hosted a rally Tuesday morning across from PS 69 in Jackson Heights, where eight students had declined to take the excams. At nearby IS 230, 11 students chose not to take them.

Parents Danny Katch, left, and Michelle Kupper, say the standardized tests many across the city are boycotting this week have taken over classrooms.

Some Queens families are testing the limits.

Eight children at PS 69 and 11 at IS 230, both in Jackson Heights, have joined an estimated 60,000 statewide who are not taking standardized tests, which take place in public schools this week and draw from the state’s Common Core curriculum.

Citing reasons such as unfair student pressure and reducing education to be “one-dimensional,” a handful of protesters met Tuesday by the Jackson Heights Post Office to decry standardized testing.

For Dudley Stewart, whose 10-year-old son, Spike, is among PS 69 students who are reading instead of taking the English Language Arts tests this week and the math ones next week, the choice was clear last year.

“His New Year’s resolution was to ‘pass the state test.’ That was the first thing he wrote down,” Stewart said. “I was like ‘Why are you being told that at 9 years old?’”

He looked into it and said other subjects, the arts, for instance, have fallen to the wayside.

“The system is not designed at this point to educate our children, it’s to teach them how to take this test,” he said, adding that other students are “vaguely aware” of the debate occurring over the state tests.

This year, grassroots movements led by groups such as NYC Opt-Out and Raise the Stakes, both of which say schools’ emphasis on testing has taken over classrooms, have said it was a win when the tests were deemed not necessary for students to move on to the next grade, but a fail when it was decided that 50 percent of a teacher’s evaluation depends on the tests.

“There is much time spent in my opinion wasted on continuous test preparation from actually the day you walk into school in September until the test is over. That to me does not provide our students with a holistic, well-rounded education,” Dromm said.

Those in favor of the exams say that standardized testing is not pointless and can help schools pinpoint areas of weakness, particularly regarding what minority students need. Another argument compares the tests to an annual physical, asserting that a checkup is harmless and that test results can improve teacher instruction. Others say the challenge doesn’t harm growing minds.

He also said he doesn’t believe the tests prepare children for the SATs or ACTs.

Other protesters asserted the tests aren’t designed to highlight student’s knowledge, and also contain mistakes such as questions for higher level-students, two possible answers per question, or incorrect scoring. Multiple speakers emphasized how the tests just evaluate schools and teachers.

Danny Katch, another PS 69 parent whose daughter opted out last year, said her participation in the decision and then seeing the state remove tests as a requirement was a more valuable learning experience for his daughter than preparing for the test.

Leonie Haimson, from Class Size Matters, said the tests are at the core of a “widespread mania” of data-based assessment that now permeates public education.

“They’re being used in an illegitimate way to fire teachers and close schools,” Haimson said.

Rosalie Friend, an educational psychologist who taught teacher assessment, said she is all-too aware of how “inappropriate” the tests are. She cited a 2014 study by the American Statistical Association, which found that standardized test scores do not directly indicate teacher effectiveness.

“This is a group that’s neutral, they’re not concerned about Common Core or anything, they’re just concerned about statistical procedures,” Friend said. “They say you can’t use the kids’ scores to tell us about the teachers.”