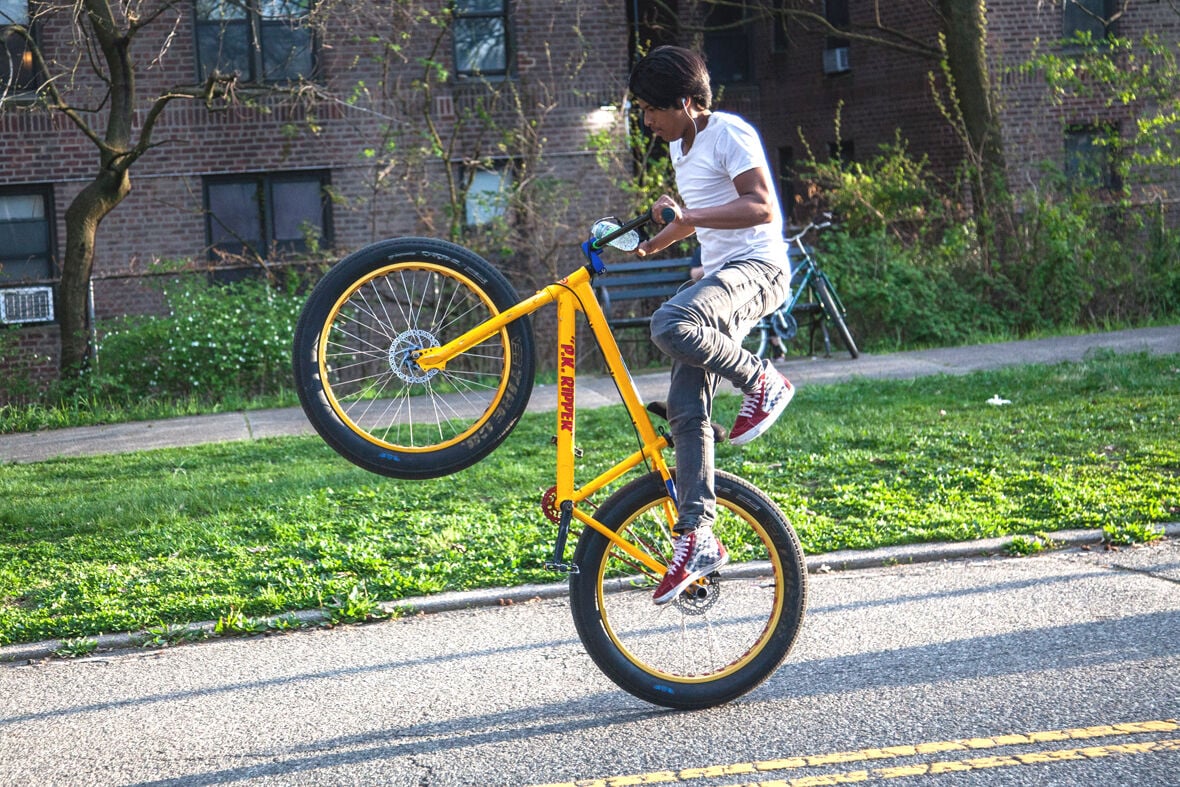 A young cyclist practiced his bike tricks last spring on a stretch of open street in the Woodhaven section of Forest Park. 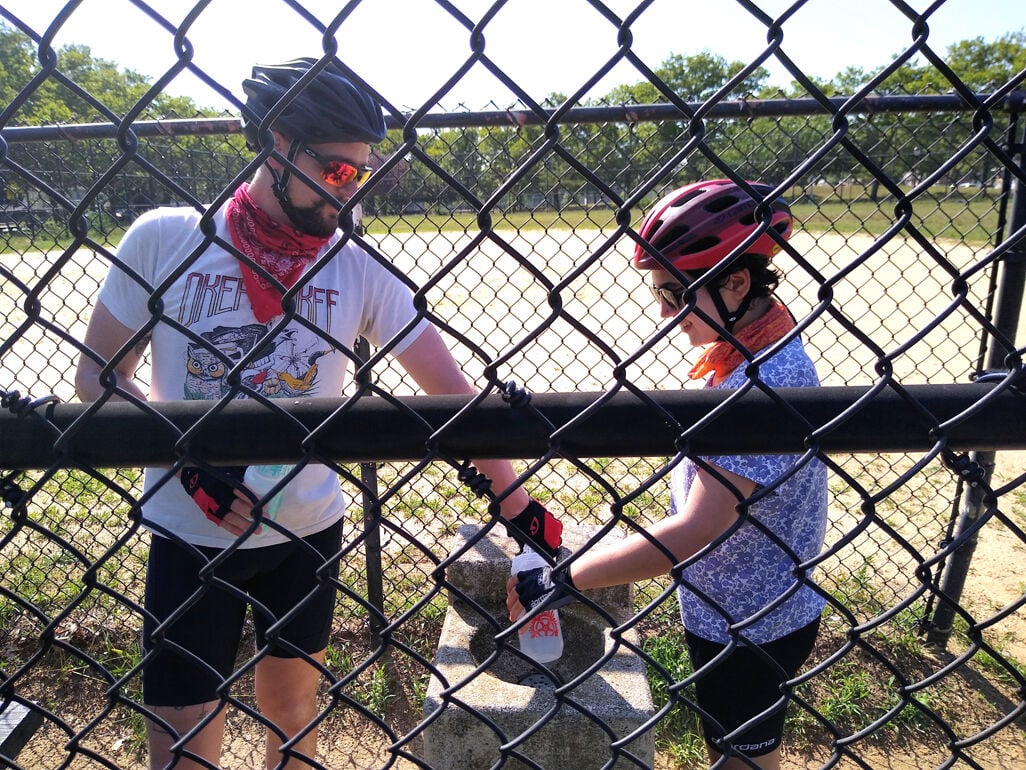 Two cyclists stop for some water in Kissena Corridor Park in Fresh Meadows. 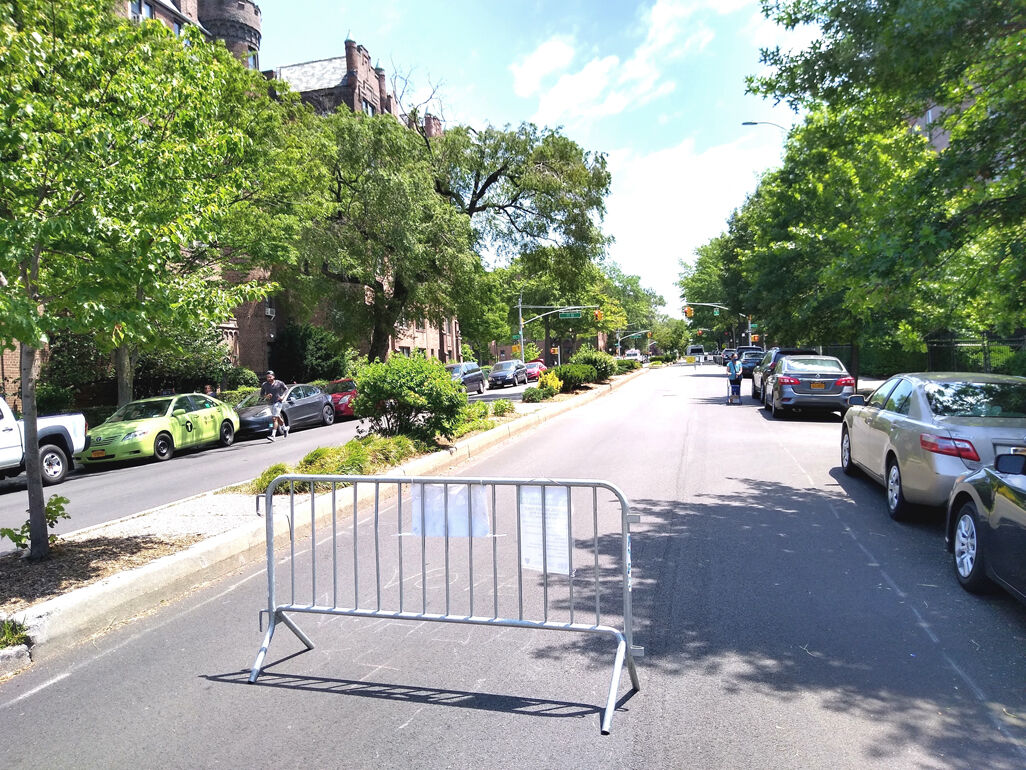 A gate blocks off vehicular traffic from Jackson Heights’ 34th Avenue open street, a great success of the citywide initiative.

A young cyclist practiced his bike tricks last spring on a stretch of open street in the Woodhaven section of Forest Park.

Two cyclists stop for some water in Kissena Corridor Park in Fresh Meadows.

A gate blocks off vehicular traffic from Jackson Heights’ 34th Avenue open street, a great success of the citywide initiative.

Although the per capita level of car ownership may be higher in Queens than any borough other than Staten Island, its reputation as car-centric shouldn’t whitewash its rewarding cycling possibilities.

Across the city, the pandemic has only underscored New Yorkers’ desire to bike. Bike riding has spiked over the past year, according to Citibike data and the Department of Transportation.

As of December, Mayor de Blasio heralded the DOT’s construction of 28.6 lane miles of new protected bike lanes across all five boroughs in 2020 alongside 83 miles of car-free Open Streets.

Despite the criticism from safe-streets advocates and cyclists that the mayor did not do enough to support the “tremendous shift towards cycling during the Covid-19 pandemic” that his acting DOT commissioner described in December, car-free areas that opened up over the past year do give them a starting point to explore certain corners of the borough more safely than in the past.

Whether you’re just learning to bike, or a seasoned cyclist looking for new experiences, Queens has a mix of everything this spring. Below are a number of areas that could serve as a good hub to start planning bike adventures. For each of these ideas, we advise traveling with GPS on a smartphone or mapping out a street-by-street route beforehand.

Spanning over a mile, Jackson Heights’ 34th Avenue is the gold standard of what the Open Streets program can accomplish. Juan Restrepo, the Queens organizer of Transportation Alternatives, said the street is a perfect fit for the bike-uninitiated.

“If we’re talking like beginners, like baby legs, everyone keeps saying that it’s easier to learn how to bike on the new 34th Avenue Open Street than it is on many other streets, just because of the very tame car traffic, the fact that it’s like a mile and a half long and there are other people there,” Restrepo said.

Those traveling from eastern Queens can connect to the 34th Avenue open street from the painted bike lane on 108th Street, which connects to the protected Queens Waterfront Greenway in the north. On the west side of the open streets stretch, a series of painted bike lanes on 75th Street and “sharrows,” the painted signs reminding cars that the roadway is to be shared with bikes, can take cyclists down the Sunnyside stretch of the Queen Boulevard protected bike lane.

A route that’s one step up in terms of difficulty revolves around Shore Boulevard in Astoria Park, which closed to vehicular traffic last April to accommodate more socially distanced outdoor activity. One way to expand an Astoria Park trip into a safe ride with some waterfront views would be to start farther south down in Queensbridge Park and bike along the western Queens section of the Queens Waterfront Greenway.

“Along the way you can take a dip into Roosevelt Island, and you can do a lap. And again, it’s another very low-stress, relatively car-free strip that you can kind of add some mileage through,” said Restrepo.

Cyclists can ride over the bike lane on the Roosevelt Island Bridge to get to the island. The only tricky part of the ride is on the Hallets Point-adjacent section of Vernon Boulevard, where the protected bike lane drops off for a few blocks south of the Shore Boulevard entrance to the park.

Two changes in Flushing Meadows Corona Park have made the park more accessible to bikes over the past year. Last spring, the city closed off 1.5 miles of roadway to cars from Meadow Lake Drive between the Model Airplane Field and Meadow Lake Bridge Parking Lot, creating a great loop for cyclists to cruise around in the park’s southern half.

At the end of October, the city began a “Destination: Greenways!” plan to identify the various gaps in what the Parks Department describes as the Eastern Queens Greenway, a stretch of nearly continuous parks extending from Flushing Meadows to Kissena Park and Alley Pond Park. Although the parks don’t form a seamless ride, if cyclists are willing to walk over several borders between the parks that don’t contain bike lanes or have difficult terrain, cycling can be a great way to explore several parks in one afternoon.

For beginning cyclists, it may be advisable to start a route in Kissena Park at the intersection of Rose Avenue and Kissena Boulevard and follow the bike path signs in the park to Underhill Avenue to protected bike lanes extending through Cunningham Park and ending in Alley Pond, for a ride that extends around at least 6 miles.

When the city closed off over a mile of roadway in Forest Park to cars near the outset of the pandemic, it unlocked a continuous 3-mile path through the park. Cyclists who start in the Dry Harbor Playground in the western section of the park in Glendale can travel around the path skirting the Forest Park Golf Course, then cross Woodhaven Boulevard and follow a paved path that will spit them out in Forest Hills.

The route along the western side of the park contains the Forest Park Carousel, as well as some scenic elevated views of South Queens.

On the Forest Hills side of the park, cyclists can lock up to explore several heavily wooded hiking trails.